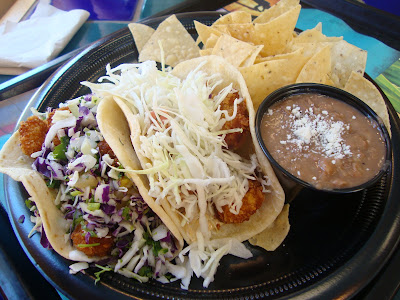 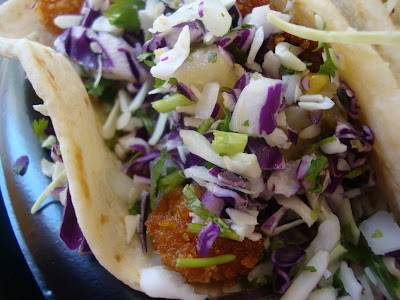 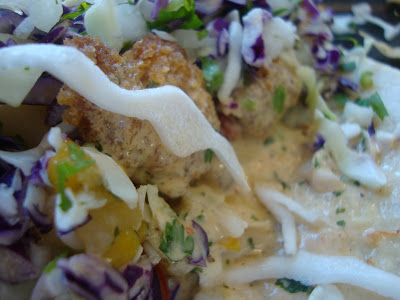 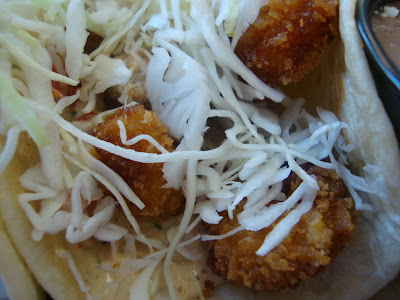 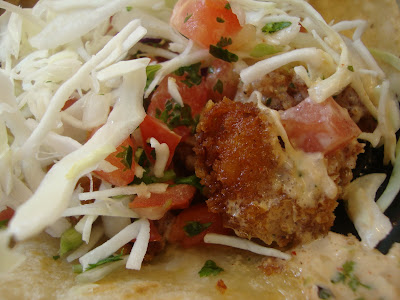 There are far too many foods I've come to love as an adult that I never would have considered even trying when I was young. I could spend the better part of an hour writing a list and it would still be incomplete: cilantro, red onion, peppers, roasted garlic, shallots, baby seal, chives, calamari, sushi, chutney, pickles... you get the idea. I believe there was a year or two where I refused to go to a restaurant unless it had fried cheese on the menu. (I often write comments that are self-deprecating exaggerations; that one was not.)

Then, when I was 20 years old, I had one of my culinary epiphanies: a plate of fish tacos at the Lost Coast Brewery in Eureka - beer battered fish, fried up perfectly golden and crispy and washed down with a pitcher of Great White Beer. I became addicted to fried seafood tacos.

Years later my friend Tom and I took a weekend trip, cramming three minor league baseball games into 36 hours and eating fish tacos for every meal. What we found that weekend surprised me: Rubio's, the San Diego-based chain, served some of the best fish tacos I have had.

In the years since then I have eaten at Rubio's frequently, often trying their new promotions. A couple years back I tried their crispy shrimp tacos and thought they were outstanding, so when they reintroduced them a few weeks ago I thought I should take my camera and grab a couple.

There are two versions of the taco: the original, with a chipotle sauce, salsa fresca and shredded white cabbage, and the "Mango" version, with mango salsa and red and white cabbage. I got a two taco plate with one of each taco, chips and pinto beans. (I realized after the fact you can request rice instead of beans, something I would have much rather had.)

Looking back through this blog, I realize I wrote about the crispy shrimp tacos a couple years ago, when I'd tried them at a Rubio's in Riverside. Those tacos had been a disappointment, with only a few shrimp scattered in them. These tacos, however - at the Rubio's in the Paseo in Pasadena - were full of shrimp.

The shrimp were crispy and hot, just out of the fryer. Both tacos had nice flavors, but if I had to pick one of the two as my favorite I would choose the mango taco. The sweet flavor of mango was a nice play against the spicy sauce and the red cabbage was more flavorful than the white, which was all the original taco contained. But I would not hesitate to eat either of them again. They actually inspired me to make my own shrimp tacos. But more on that later...
Posted by JustinM at 9:30 AM

im originally from san diego, so ill always have a soft spot in my heart for rubios, and a big spot in my belly for fish tacos!

Can't believe you missed out on so many years of missing baby seal. So great with some melted butter...