There are times in life when nothing but a burger will do. Do you know the feeling? When it comes over me, when I don't just crave but need a burger, there are only two acceptable possibilities: Hutch's, and making my own burger.

Tuesday night I needed a burger. But going out was not an option: there was tremendous anticipation in our house for the season premier of Glee. (Of course, that anticipation was 100% Elizabeth. I was in the bedroom watching Ervin Santana throw one of the most impressive games of his career.)

So I got the ingredients for burgers at Taylor's in Sierra Madre. I will give you the rundown: 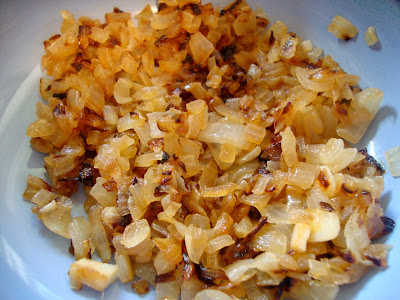 I caramelized a Vidalia onion. Vidalia onions are already sweet enough to eat when raw - I have read that the water and sugar content of a Vidalia onion is comparable to that of an apple; it certainly tastes that way - and when caramelized they are as sweet as candy. I am not sure if there is a better, less expensive condiment to add to a burger that can change the whole complexity of it. 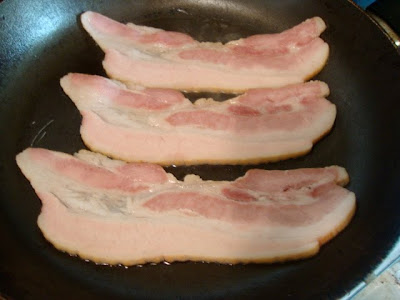 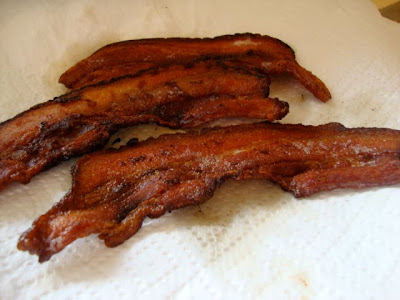 Taylor's has thick slices of Amish bacon: meaty, fatty slices that compare to packaged slices of Oscar Meyer bacon in only the slightest of ways. I cook them in a pan at a relatively low heat so as not to burn them. (The slices are so thick that at too high a temperature the outsides will blacken while some of the meat will remain raw and fatty.) After several minutes - if I don't screw up - the bacon will be dark brown and crispy. 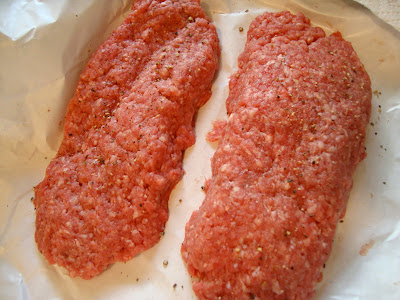 I formed two hunks of ground beef into elongated patties. 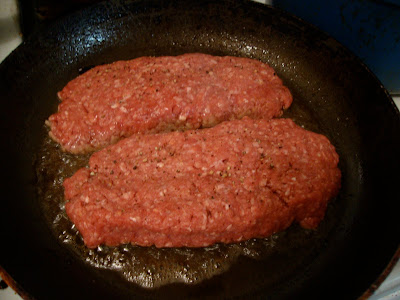 Did I cook them in the bacon grease? Yes. Yes, I did. 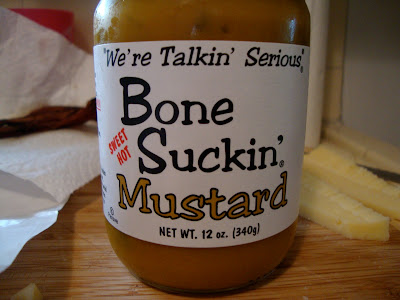 Elizabeth and I both love Bone Sucking Sweet Hot Mustard (although to be fair there are only one or two mustards I have ever tried that I did not love) so we usually have a jar of it in the house. It's a combination of brown sugar, molasses, paprika and jalapenos. 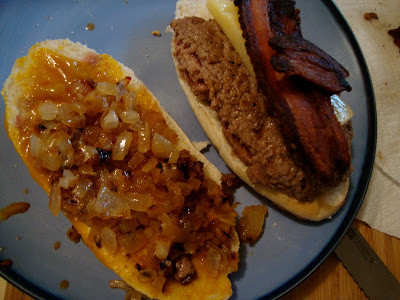 I spread some of the mustard on a roll and topped it with a large amout of the caramelized onions. On the other half I placed the patty and topped it with the bacon and some gouda cheese. Yes, I wrote blue cheese in the post title. I lied. I was going for alliteration. 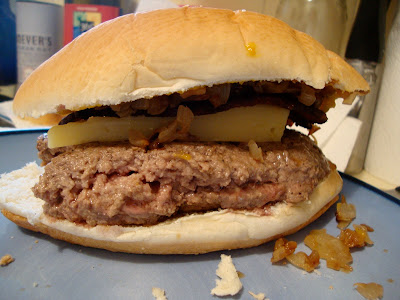 I was so excited to photograph and then eat the burger that I forgot to add lettuce. My better half had to point it out to me. 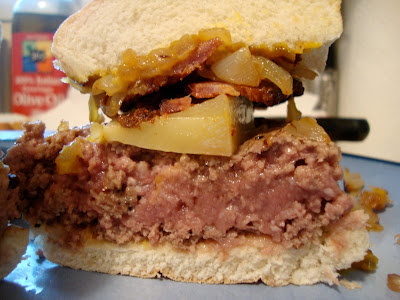 I had wanted to melt the cheese on the burger, but it wasn't melting as fast as I expected. So I was left with a choice: melt the cheese and overcook the meat, or just eat it unmelted. An easy choice. 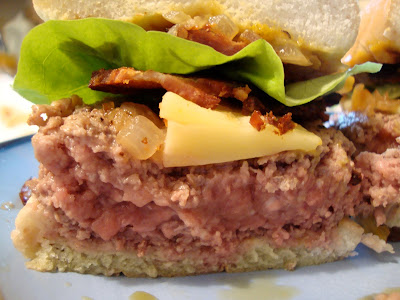 I added the lettuce to half the burger and took a picture of it. This was the best burger I have had in a long, long time.
Posted by JustinM at 9:35 AM

"Mama's cookin' chicken fried in bacon grease, c'mon along boys it's just down the road a piece" - Chuck Berry

My mom (raised in east Tennessee) used to keep a coffee can on the stovetop for the keeping of the savory, smokey, surfeit. We used it to fry anything and everything. Boy, was that yummy! Somehow now it seems so extreme - Nah!

That is a burger to beat the band!

My North Carolina born mom used to keep a coffee can of bacon grease as well, at least when I was little. I think she gave up on it when it became obvious that her daughters were total SoCal girls and didn't appreciate the beauty of stuff fried in bacon grease.

If necessity is the mother of invention, perhaps laziness is the father. (Unless it's MacGyver.)

My mom kept a coffee can of bacon grease as well, she still might. It's definitely good stuff. Things cooked in bacon grease taste so much better- and this burger was no exception.

Damn J see what you started. What are you going to cook in bacon grease next?

My grandmother(Louisiana) does the same thing lol. Every morning that I cook breakfast my eggs are cooked in bacon grease. This burger looks good.

Where do the sell that mustard at in L.A.?

I have been to Louisiana at least a half-dozen times and have yet to have a bad meal there. They know how to cook!

I have seen the mustard at several places, most commonly Whole Foods, which is where I purchased it.

Now... that is an amazing burger! Quite a hunk of meat there with caramelized onions... pure love!

Just had an amazing burger myself when I went to Gus's BBQ in So Pas. Couldn't believe how good it was... bacon, sharp cheddar, the whole works. :)

I went to Gus's once and had the pulled pork sandwich. It was terrible; fake barbecue on a hard ciabatta bun. But Elizabeth had the fried chicken and said it was very good. And some other friends of mine have been there many times and tell me that the burger is great. So maybe I should return and try the burger. I do like the place, I just hated their 'cue.

I didn't like their pulled pork sandwich either. The burger is spectacular though... highly recommend it.

I also really like their chicken wings. They're just a teeny bit different and although I'm not a huge lover of corn bread, my kids say that it's to die for.

Let me know what you think once you try it. I only tried the Gus's Famous Burger. :)