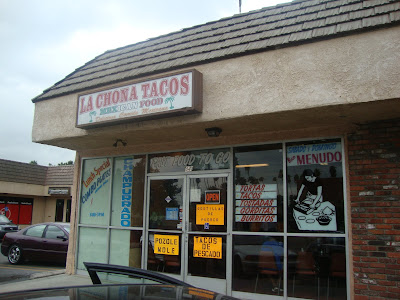 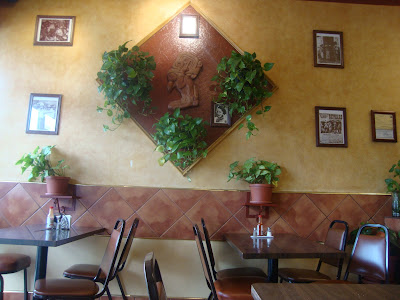 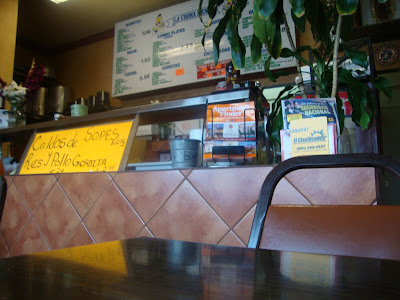 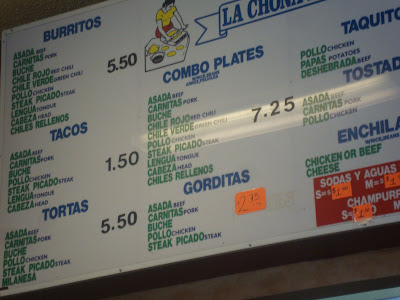 A few months back I was comparing lunch notes with my friend Tim. I had been somewhere, probably Slaw Dogs, and he mentioned that he had been close by, at La Chona Tacos. I did not know where that was so I later looked at a map - it's in a small strip mall on the west side of Lake Ave, just below Mountain. (I had recently been in that strip mall, indeed parked right in front of La Chona, and yet I still could not picture the place.) He reported that the carnitas tacos were awesome.

So we recently met up to do lunch at La Chona. The place looks exactly like I want a hole-in-the-wall taco joint to look: tables crammed too close together, a picture (ideally more than one) of Jesus on the wall, a menu that is a combination of printed and handwritten items and prices, and friendly people behind the counter. 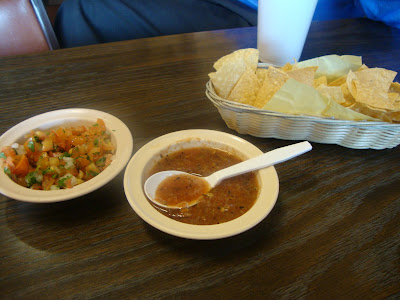 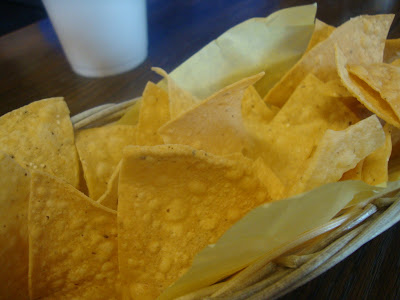 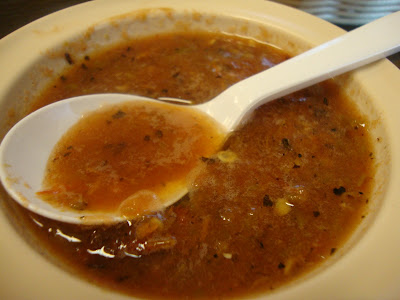 We got a small amount of chips and salsa to start with. It may not be completely accurate that I can always guess the quality of food that a Mexican restaurant is going to serve by having a few of their chips and salsa... but it sure feels that way. Some places serve thick wedges of fried tortilla still glistening with oil, and salsa that you would be willing to drink if it came down to it, and you know you're in for a good meal. Some places serve you stale chips and a salsa with the consistency and spice of water, and you can foresee the rubbery enchilada and flavorless tacos that will be coming your way.

La Chona's chips were nothing special - although they tasted like they might have been great a couple hours earlier - but their salsa was fantastic. Flavorful up front with some heat creeping in after a few seconds, powerful enough to make you feel it but not so powerful that a sip of soda can't erase it. Within a minute my mind had thought of no fewer than two dozen dishes to which I would like to add this salsa. I would try it on ice cream. 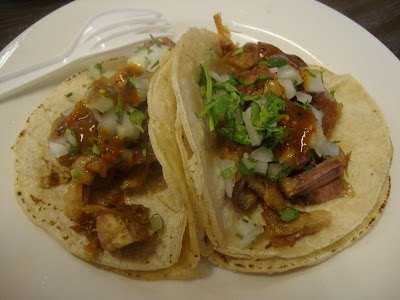 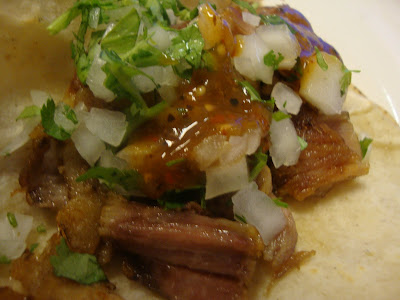 Tim told me he had ordered the carnitas tacos every time he had been there (although he was going to switch up his order this time), so I ordered two of them. The carnitas were great: tender, not very fatty, and with that sweet pork flavor that is complemented so well by onions and cilantro. Each taco came with the usual two tortillas, but, unlike those skimpy tacos you sometimes get that necessitate two tortillas so the whole thing doesn't fall apart, La Chona's tacos only require one of their substantial tortillas, so I discarded a tortilla from each.

These are the same price as the tacos I loved at Taco Station on Green St. ($1.50 each) but I would estimate they are about twice the size. It's always nice to learn there are still great deals around. 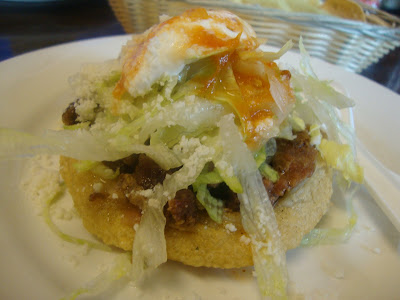 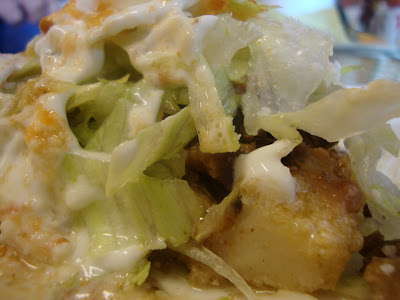 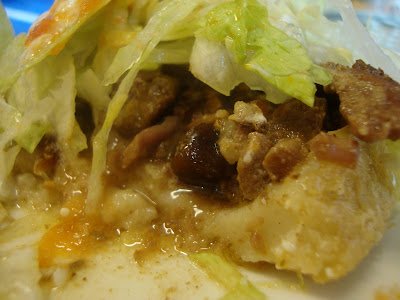 I also ordered a sope with carne asada. There is not another item in Mexican cuisine that I find more hit-or-miss than a sope. When done right it is one of the best things you will ever eat, a fist-size pile of dough and toppings that melts in your mouth. When done wrong it is almost inedible - masa that can break teeth and toppings that taste mostly of refried beans.

The base of this sope was very good. (I gave Tim a bite and he agreed.) The beans were chunkier than I like on a sope but the carne asada was good. Not as good as the carnitas, but certainly good enought to compensate for the beans and raise my opinion of the sope to "better than average." But not as good as the tacos. 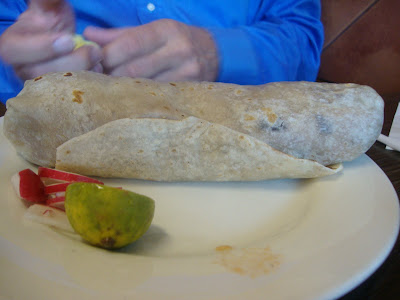 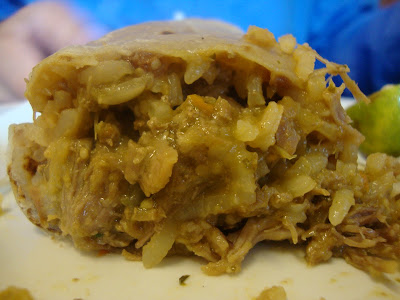 Tim's decision to stray from his standard order resulted in him getting the burrito with chile verde. After just a couple bites he announced that he didn't like it as much as the carnitas tacos. I sawed off a piece - or rather I attempted to; it mostly just squirted out of the tortilla and onto the plate, which I scooped up with my fork and put on one of my unused tortillas from the tacos.

I loved the chile verde. It certainly needed some more spice, but a slug of Tapatio from the bottle on the table did the trick. I admit I am going through withdrawal from the loss of Trader Joe's chicken chile verde ("It's one of our most popular sellers; there's no way it's going away," an employee mistakenly told me a year ago) but this was some good stuff. I would love to try this on their tortilla chips.

Did I like La Chona? Yes, very much. Did I love it? No... not after only one visit. But I will certainly return and try more of their tacos and probably one of their tortas as well. We were both full when we left. All our food, plus two sodas, was $15.16. Someone with a smaller appetite than mine - which is most people and some members of the big cat family - could easily make do with two tacos and a soda for lunch, which would put you back $4.50 plus tax.

UPDATE, 9/10: My friend Tracie called me last night; she was at the original Trader Joe's, on Arroyo Pkwy, and she reported that they have chicken chile verde. I have not been to that one in more than two years (It's way too cramped, both inside and their ridiculously small parking lot,) but the two I go to regularly - South Pas and Hastings Ranch - have not had it. I will investigate further this weekend.
Posted by JustinM at 9:12 AM

chips and salsa is TOTALLY the way to guage how a Mexican restaurant will be. I SO MISS good southern californian mexican food-so many great hole in the wall places there!

It's always fun to stumble into place like this because you know at least one thing is gonna be really good. You just hope you order it.

After discovering the joys of the sope at a taco truck this past December, I was ordering them from every Mexican place I went to for a while. Most were good, a couple were fabulous, but man, King Taco has the crappiest damn sope ever. It was everything bad you described, but tepid. Ugh.

I tend to think of King Taco as an intermediate step for people who want something better than Taco Bell but aren't quite ready to hit up a late night taco truck or go north of the 210. It's not bad but it's not very good (and the Pasadena location is by far my least favorite of the three I have been to.)