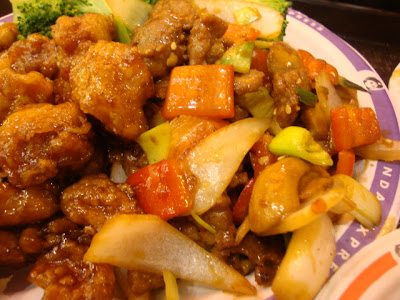 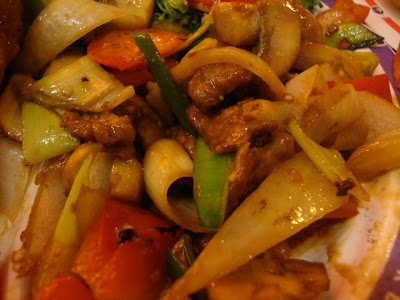 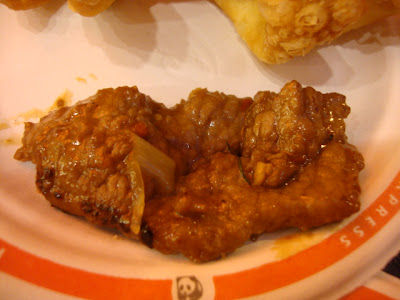 I will say one thing about Panda Express: they always leave you guessing. I'm not a huge fan of the place, and I do not eat there more than once or twice per year - basically whenever they come out with a new promotion - but I do not hate the place. I know some people do, and I certainly do not fault them for that: the sugary, fatty, been-sitting-in-a-steam-tray-for-God-knows-how-long foods that Panda sometimes serves can be terrible.

I cut Panda slack for two reasons. First, they gave me a lot of nice memories when I was a teenager. It was always a thrill when Panda provided lunch at my high school and I didn't have to eat a lousy chicken patty sandwich for the tenth time that month (or my backup lunch of nachos and gummi bears). My brother and I would sometimes stop by Panda on our way home and load up on orange chicken if we were in the mood for it. When I was 16 I ordered a beer at the Panda Express at the Glendale Galleria. I didn't even want the thing - I don't believe I'd ever had more than a sip of beer at that point - I just wanted to see if they would give it to me. Which they did, with no questions asked.

Second, some of the promotions Panda comes out with aren't have bad. The quality at different locations varies tremendously - more so than any fast food chain I have ever eaten at - but I have had orders of the Beijing Beef that almost rivaled Yujean Kang's crispy beef. (Emphasis on the "almost.") Their honey walnut shrimp, which I thought was going to be terrible, was actually crispy, high-quality shrimp.

So when I heard about Kobari Beef the other day - marinated beef with peppers, leeks and mushrooms in a "sweet, smoky, spicy sauce" - I decided it needed to be tried.

It doesn't look like there's very much beef in the picture. That's because there wasn't. The meat you do see, on the left side of the photo, is the orange chicken that made up the other half of my two-item combo. I found one decent-sized strip of beef that I was able to separate and photograph; all the other small pieces scattered throughout the veggies were smaller than a dime. I hope it's at least tasty, I thought to myself.

It was as bland as could possibly be. I could not taste any of the three flavors they advertised. The beef wasn't bad, it was just... flavorless. I scooped up several pieces of veggies with sauce and a couple of the tiny pieces of beef and ate them in a huge bite, hoping a massive amount of food and sauce would provide some flavor. Nope. Nothing.

If the line at Panda Express hadn't been so long - there was an older couple holding everything up; they had some kind of coupon that apparently they thought entitled them to all the free food they could eat, or something like that - I would have gone up to the counter and said something about the quantity of beef and quality of the sauce. Maybe not a direct complaint, but a pointed "Is this supposed to have so little meat?" But I did not feel like waiting in that line a second time, and, one thing I've learned about this particular Panda Express, they don't really care what they're doing. (I had clearly stated to the server that we would be eating there; for some reason they put my food on a plate and Elizabeth's food in a styrofoam to-go box. They don't even listen to you.)

I am sure I will go back to Panda Express in a few months when they come out with a new item, but definitely not until then.
Posted by JustinM at 10:49 AM

i have the same nostalgic feelings about that place...though i was never cool enough to try ordering a beer in high school. i only WISH i was

i hate when chinese joints (not just panda express) use vegetables as filler. its fine if the veggie is crucial to the dish (brocolli beef, chicken and mushroom), but just for the sake of keeping the price of the dish, it sucks! theres a place i order from- their general chicken is the bomb, but the bottom half of the chinese carton is cabbage. bleh.

If it hadn't been so busy I would have said something along the lines of "Come on, you can't be serious." But it would have taken ten minutes, perhaps longer, just to wait in line. That piece of beef I photographed was literally the only piece I received larger than a dime.

We can't think of any dish at PE that is redeeming . . . though if we are truly in a bind, we will do the PE "orange chicken" with no sides.

After reading this review, we can without a doubt say that we'll likely not ever be back to PE.

I can't say I blame you. I hate the steam trays. You don't know if your food was made thirty seconds earlier or an hour earlier.

That's so odd, it seems everyone has had a bad experience with the Kobari Beef dish.
I tried it yesterday, as it was the only food that looked even slightly appetizing while I was out running errands.
The beef was really, REALLY good. And there was a lot of it - big succulent perfectly tender and deeply smoky and flavorful. The dish was very lightly peppery but the flavor of the beef, which was of extremely good quality, was the star of the dish.
Like the reviewer said, the quality of Panda's food varies wildly from location to location.
Re: the above comment about Asian restaurants using veggies as "filler" - actually that's a pretty traditional proportion of veggies to meat. Meat is used almost as a flavoring.
That being said, my Kobari yesterday was about 90% beef, 10% veggies.
It was a Panda in the Magnificent Mile area of Chicago, so maybe they cater towards upscale tastes at that location?
Oh, re: the steam trays - if they aren't slammed with customers and you ask nicely, they will make your food fresh. Even if the tray isn't empty. It may not be gourmet Asian cuisine, but it does taste best fresh. =)