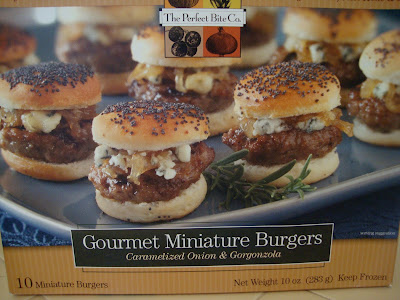 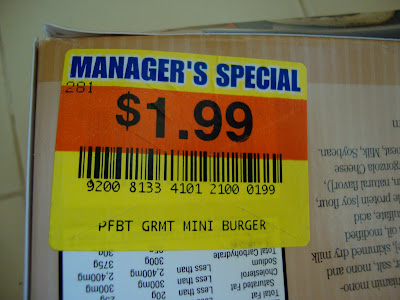 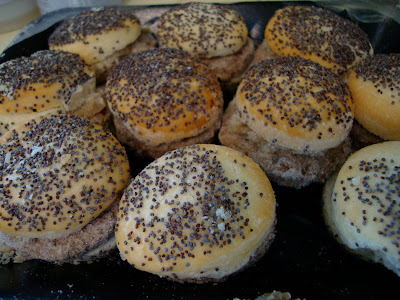 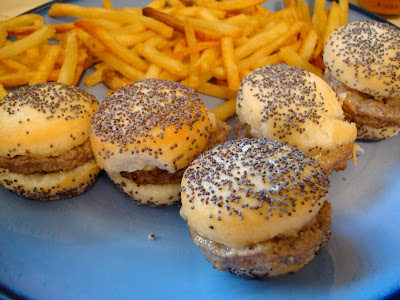 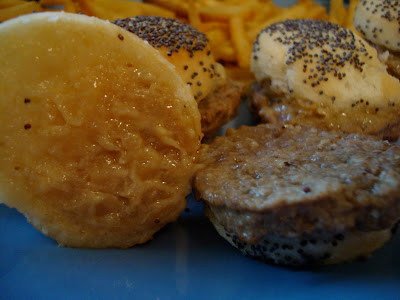 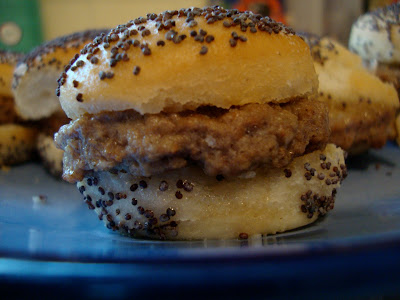 I'm always leery when a product - especially a frozen product - labels itself as "gourmet." It seems a bit of an overcompensation or, in most cases, a lie. I've noticed for some time The Perfect Bite Company's appetizers at Bristol Farms, $16 packages of mini crab cakes and such that look like they could be good but also look like they could be a complete ripoff. For $16, I've never felt like taking the chance. I could buy fresh crab and make my own crab cakes for not much more than that price.

The gourmet miniature burgers - with caramelized onions and Gorgonzola - also look interesting, but the packages at Ralph's are $14.99. I could get three packages of White Castle burgers for that price and caramelize my own onions. However, not long ago I was at Raph's and several packages of the Perfect Bite burgers were a "manager's special" - on sale for $1.99.

I did not know if the store was trying to get rid of their stock, or if maybe they had gotten partially defrosted (the box was a little deformed.) At that price, though, I was willing to try them. I'll feed one to Elizabeth and see if she gets sick; if not I'll cook the whole box for dinner.

They certainly did not look like much when I took them out of the box. Ice crystals were everywhere and they were hard enough that they might have put a dent in the kitchen tile if I'd accidentally dropped one of them. I was even less impressed when I read that the preferred method of heating them is in the microwave. I am not a big fan of the microwave. Sometimes weeks go by without me using it.

So I zapped them in the microwave and plated them with some fries. But I couldn't really let Elizabeth be the guinea pig; I had to try one first. I did... and it was actually really damn good. I took the plates out to the living room and asked Elizabeth what she thought. She tried one and, with a surprised look on her face said "These are good."

The caramelized onions and Gorgonzola were a beautiful combination and the beef, while perhaps not USDA Prime, was much better than I expected. These were an absolute steal at $1.99, unless of course we both get incredibly sick with some intestinal virus in the next few weeks that is traced back to these. In that case they were merely a decent deal.

Now, the obvious question: would I buy these at the regular price of $14.99? Absolutely not. I could make them myself for less than half that price. Each one of these burgers was about one bite. I can't think of anything that comes out of the microwave that is worth $1.50 a bite. But if you ever see these on sale for $1.99 (damn I wish I'd bought more than one box), they are definitely worth it.
Posted by JustinM at 9:23 AM

These were really good. I was surprised. But definitely not worth the full price.

beef and any blue cheese is such an amazing combo! glad this was not a disappointment and that you got SUCH an awesome deal:)

Glad they taste good. . .but the packaging reminds me, a little, of an upscale version of the frozen White Castle burgers they sell in east coast supermarkets.

I wonder if it's too late to corner the market...?

Thirsty Pig: You can get those WC burgers here in SoCal. In fact, the second post on this blog, almost two years ago, was about them.

Purchased these for guests for just a snack don't waste your money they had one tiny tiny piece of bacon didn't even know it was there.Tasted like idk had wierd taste. Its to bad it was a good idea. Gourmet mini burgers at BJS