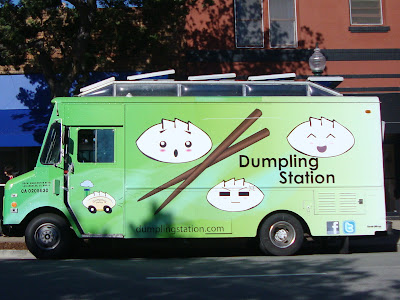 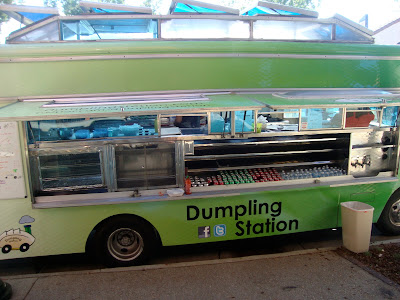 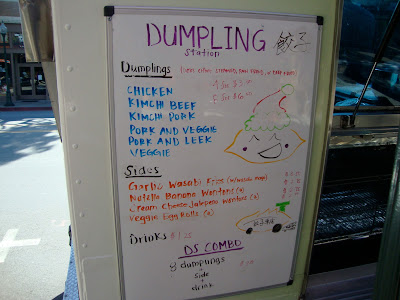 I am not one of the people in love with the concept of food trucks. I certainly do not hate them and if there were a food truck on every corner it would not bother me one bit. But the idea of waiting in long lines for food that more often than not is merely average (I have yet to have a meal from a food truck that I could not replicate at home) does not appeal to me. I was at an event at the Arboretum once where people were waiting in two hour lines for food. From a truck. Seriously?

A friend once raved to me about eating Kogi and questioned why I hadn't tried it. I asked how long it took him and was not surprised when he said "about an hour to order and another half-hour to get the food." When I explained to him that I could drive to H Mart, buy the ingredients and make my own Korean BBQ at home in less time than that, he offered me a challenge. I won.

But, as I wrote, I do not hate food trucks, and there are still a few out there that I would like to try. One that I have had my eye on for a while is Dumpling Station. The other windy day, driving down Mission in South Pasadena, I spotted the truck. There were only a couple people milling about and I was in the mood for a snack, so I parked my car and got out.

There were two people in line ahead of me. And it still took me more than ten minutes to place my order. I shudder to think what the wait time is when there is a long line. I ordered four "kimchi pork" dumplings, pan-fried (you have the option of pan-fried, steamed, or deep-fried) and garlic wasabi fries.

I stood on the street for about 15 minutes waiting for my food. There was a wall nearby and I thought about sitting there to eat, but the wind was blowing hard so I took it to my car. 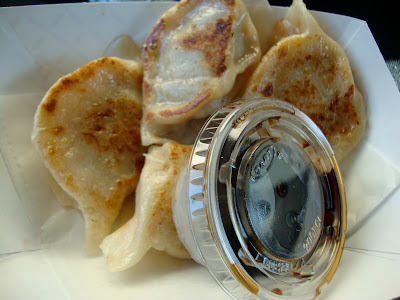 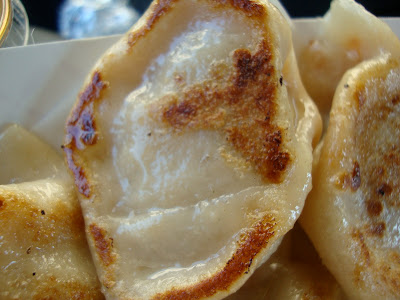 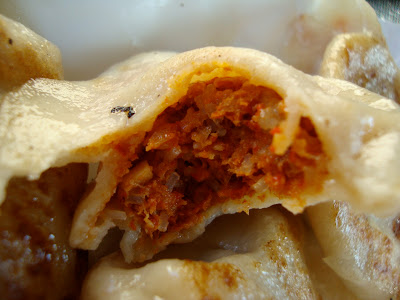 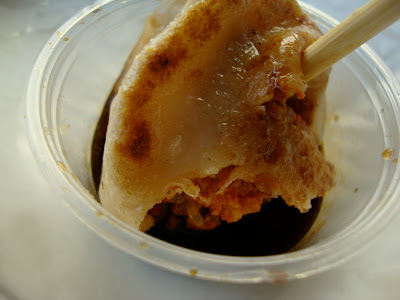 The kimchi pork flavor was very good, with the perfect amount of spice. I'm not sure I could make this at home without lots of experimentation and a couple of recipe guidelines. I would love this in an egg roll. I wish the dumplings had been fried at a higher temperature; the side that was in the oil was barely browned, resulting in a gummy texture and bland flavor. (If I'd know the dumplings would be this flabby, I would have just ordered them steamed.) But the interior flavor was so good that I still really enjoyed these. 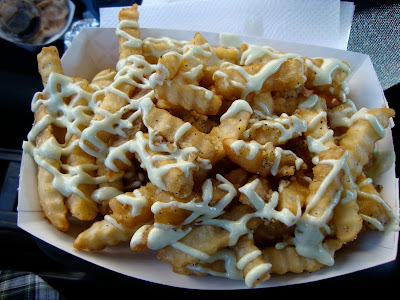 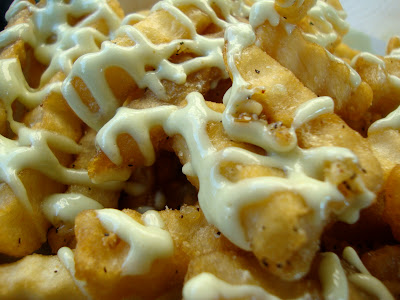 The crinkle cut fries were perfectly cooked and the wasabi sauce was delicious, but I did not care for the garlic and spices on the fries. They were extremely salty. I shook off what I could and tried to eat around the seasoning, but this proved very difficult. I probably finished less than one-third of the order. Yet another example of my opinion that it's more frustrating to receive a dish that could be great but is suffering from some major flaw than a dish that merely sucks. ("For all sad words of tongue and pen, the saddest are these: 'It might have been.'")

Dumpling Station is usually in South Pasadena a couple times per week, and if I am with someone who wants to try it I would be glad to go back. Often the truck is parked by South Pas High School, which strikes me as a wonderful idea; when I was in high school I'm sure I would have been blown away by this food.

But I wasn't on this occasion and I doubt I will ever return by myself. The dumplings were good but not great, the fries were a disappointment, and the 25 minute wait - when there were only two customers ahead of me - was just too long. Despite that, I honestly do hope they succeed. They were very friendly and I appreciate them bringing unique flavors to South Pasadena, which is not exactly a bastion of ethnic cuisines. (Unless you count Panda Express and Baja Fresh. Which I don't.) But I just did not find anything special enough about the food to return.
Posted by JustinM at 10:45 AM

I like this line. It's not the person that changes, just the perspective. When you were in high school, you also thought cooking was dumb.

The truck thing is a growing phenomenon probably spawned by it's appeal to chefs who have good ideas but lack the income to do a brick and mortar operation. It also carries with it a rogue/maverick spirit which is probably also enticing to its practitioners. I can easily see how young talented chefs might be tempted to go this route.
Yet, just like any other restaurant manifestation, they will live or die by reputation; regardless of their ability to dodge and move about like pirate ships.
My only hope is that the cupcake trucks disappear first -

TJM: I also thought California Pizza Kitchen was exotic, Yujean Kang's was boring and Hutch's made the best hamburgers in the world. (Turns out I was right about that last one, though.)

Remember the orange-sauced mini dumplings at Nevado's in Mammoth? Those were like the most magical things ever. I wonder what I would think of them today.

Nosh: I have to say, if there were a pirate ship food truck, that would be awesome. A few months ago I watched Anthony Bourdain in the Hudson River Valley and while he was taking a boat up the river, a motorboat selling hot dogs came by. That struck me as the coolest seafaring vessel ever. But a pirate ship food truck would be better, especially if it was one of those amphibious vehicles.

(Elizabeth pointed out, though, that in thousands of trips both along and in the Hudson, she had never seen anything like a hot dog boat, which makes me a little suspicious. If there were actually wieners around, she would know about it.)

It would be cool if the trucks would cruise around and when they tallied another truck they would raise the Jolly Roger and proceed to commandeer the enemy vehicle, throw the crew onto the street and...uh, well, only the cupcake trucks.

There are cupcake trucks? That's just ridiculous, it's not like one can't swing a dead cat without hitting a brick-n-mortar cupcake shop, and now they're roaming the streets???

I would like to point out to all those who think it's absurd to pay $4 for a cupcake (which it is) that I recently had an 89 cent cupcake from King Ranch Market that was as good as any I have ever had in Pasadena.

My niece makes cupcakes from a boxed mix that are fantastic.

gummy dumplings are a major turn off for me. Too bad, because it looks like the filling was really great! The only truck i am totally addicted to out here is waffles and dinges and that is just because I looooove me some waffles!

Always wanted to try the Dumpling Truck fare... dumplings look great, but those fries... not sure I could stand all that sauce. Just weird.

There will be a food truck festival in Santa Clarita next month, looks like they have some interesting options and it's nice that they will be in one spot and you don't have to chase them down:

Ah I tried this truck randomly driving down Mission to Trader Joe's. Didn't try the kimchi ones but the dumplings remind me of the frozen Ajinomoto gyoza.

I enjoyed the wasabi fries the most though. I think it's a "your mileage may vary" thing about the saltiness and seasoning though.

Yeah. . .seriously 25 mins for dumplings is way too long with only 2 people in front. . .I hate waiting in lines for food trucks especially in the cold, wet, and heat.

I might try the dumpling truck when I get back to LA, since it is close by.

It's too long to wait for dumplings that aren't great, that's for sure. I've waited countless hours at Luscious Dumplings and Din Tai Fung, with no complaints. But these just weren't anything special.

Hi, I must say your photos of those dumplings and fries are spectacular!
I just found this truck yesterday at Garfield Pk in S.Pas; unlike you,I did love those garlic fries A LOT! but then again, i love very garlicky and salty foods too. I have to agree about the dumplings--they were just okay for me--i had the pan fried ones and couldn't tell the difference betw. the different fillings. I think they were a little skimpy on the fillings too. There was no line yesterday (around 6pm), and the wait time was about 10 min for me...maybe all the hype has diminished, i don't know. But i probably will go back again just for them fries!

Hi Augustina. I'm glad you liked the fries - I liked the potatoes and loved the wasabi sauce, but the spices were just weird. Not just really salty, but another spice I couldn't quite figure out. I would be willing to try them again, though.

As far as the dumplings, I went back and tried them again and they were the same flabby, average things. I can think of dozens of better places to get dumplings. I can even make them better myself.