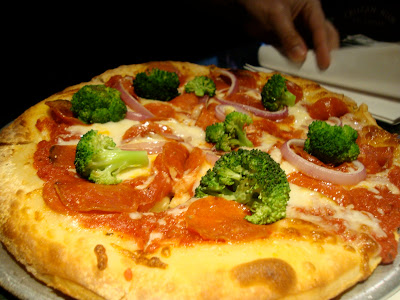 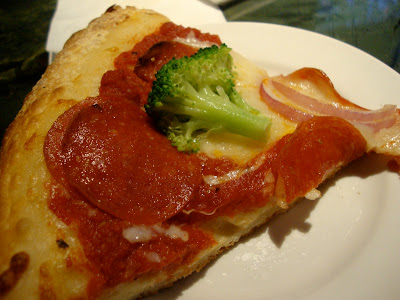 One of the better kept secrets in Old Town Pasadena, where people wait in hour-long lines for chain restaurants or places that haven't been good for more than a decade, is that every once in a while you can get some of the better pizza in the San Gabriel Valley at 72 North, that bar that changes names as frequently as Brett Favre retires. It's not always great; sometimes the dough is too thick and resembles the kind of $5-for-a-whole-pie pizza I ate when I was a teenager because I didn't know any better. But every once in a while you get a truly great pizza: thin, pliable with a touch of crispiness to it, with a zesty sauce and a few spots of crust that have been singed a little more than necessary.

I once shared a pizza with my friend Dave on Christmas Eve (which wasn't anywhere near as depressing as it sounds). He grew up in New England but has lived around here for more than 15 years and he proclaimed it the only pizza he can remember eating in Pasadena that tasted like it could have been crafted in a New Haven pizza oven.

The other night I was with some friends watching football and my friend Murph asked if I would have a slice of pizza if he ordered one. I said of course. (I do not believe I have ever once answered "no" to that question.) He got the pizza you see above, with pepperoni, broccoli and red onion. It was not the thin crust pie I love at 72 North, but it was still outstanding. I ate my slice in about three bites.

"Have another," Murph said. 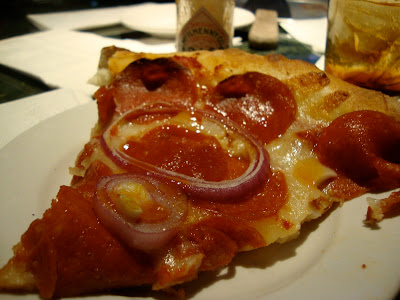 I returned to find a slice sitting in front of me that was devoid of broccoli.

"I hope you don't mind," Murph said, "but I took the broccoli off the rest of the slices and put it all on one."

I did not mind, for many reasons, not the least of which being that he bought the pizza. Plus I always like it when Murph eats something healthy.

My friends Ed and Dawn were sitting near us at this point, pondering what to do for dinner, when they decided to get a pizza because of how good Murph's looked. They went with the regular pepperoni. 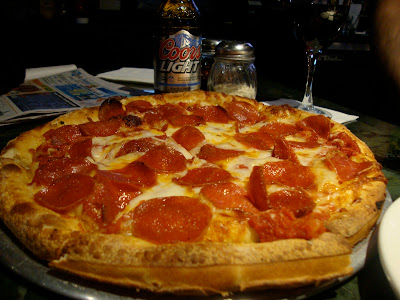 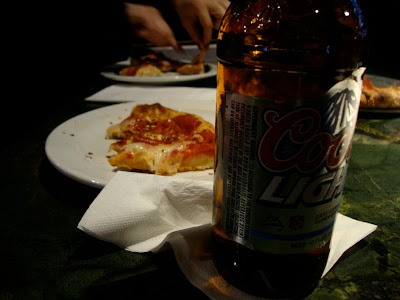 "Okay," he said, "just make sure you get the Coors Light in it."

By this time my friend Carla had joined me and decided she wanted some pizza as well. She asked if I would have a couple slices if she got one. I again said sure.

We were told the dough wasn't ready yet for another pizza and it would take an hour before we got one. We said that was fine. 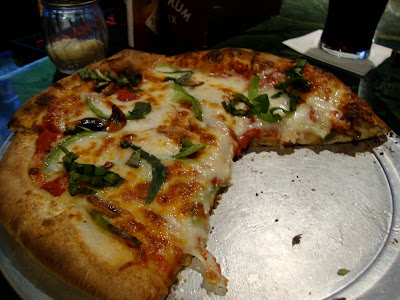 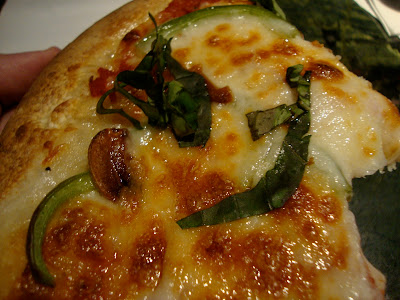 It only took about 50 minutes. Our idea was to get pepperoni and green onion as an homage to the Mt. Etna from the dearly-missed La Fornaretta - known these days as the Church of Scientology lobby - which will probably always be my favorite pizza I have ever had in Pasadena. But there is no green onion on the menu at 72, so we opted instead to get roasted garlic, basil, and green peppers. Like the other pizzas, it wasn't as thin as I was hoping for, but it was still great. 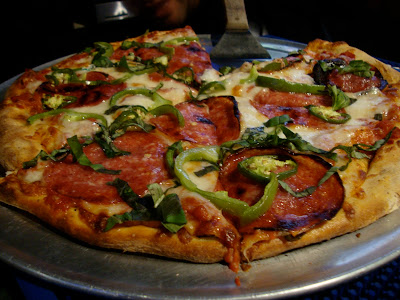 The bartenders thought our pizza looked so good that they ordered one of their own, with pepperoni, jalapeno, basil and green peppers. I did not try any but I took a picture of it. This was thinner than any of the previous pizzas and I was a little jealous. I almost considered ordering another pizza in the hopes that I would get the thin crust I love. But enough was enough.
Posted by JustinM at 11:43 AM

i love thin crust. i like being able to eat 3 slices and now wanting to take a nap after.

PP- were u going for the jets or pats?

The Jets. I loathe the Patriots. Although I enjoy that the "genius" Belichick has now lost three playoff games in a row. I guess it's not so easy when you can't cheat.

Broccoli? On a PIZZA? I have to say, that's one of the oddest things I've ever seen sitting on a slice of pizza.

In America, and especially in California, it isn't that unusual to have vegetables on pizza. Broccoli certainly isn't as ubiquitous as peppers or onions or even zucchini, but it's not terribly out there.

Such detail, about using the restroom even!