Two years ago, at the request of a friend of mine, I published a letter I wrote to McDonald's back in 2007, asking them to bring back the greatest fast food promotion of all time: Shanghai McNuggets.

Anybody else remember them? If not, watch this and see if you don't get hungry. Or offended.

Here is the letter I wrote them:

"Greetings! I am writing you to suggest that you bring back Shanghai McNuggets. I, and all of my friends who grew up in the 80s with me, agree that was the greatest fast food promotion of all time, even better than Burger King's Return Of The Jedi glasses (not counting the Ewok glass, obviously; that was freaking awesome.)

I recently took some young cousins of mine to McDonald's and while we were there I told them about the Shanghai McNuggets. They thought those sounded so spectacular that they made me take them home so that they could eat their McNuggets with chopsticks and dip them into teriyaki sauce.

I could go on and on with anecdotes about how many people I know loved Shanghai McNuggets. One time my brother and I were eating them and he poked me in the eye with a chopstick. It hurt like crazy but I did not care because I was busy enjoying the greatest food combination of all time: McNuggets and a fortune cookie.

Every person whom I have told that I would be writing you about this matter has been extremely encouraging. Literally 100% of my friends would love to see a return of Shanghai McNuggets. My friend Bryce got a tear in his eye reminiscing about them. So I suggest a limited return of Shanghai McNuggets in the Southern California area. There is a whole generation of people who would love them as much as my friends and I did."

Last night, I asked Elizabeth what she wanted for dinner and she replied "McNuggets." That was just fine with me, and I decided to take the opportunity to do an homage to Shanghai McNuggets. Our friend Tracie had stopped by to return a necklace to Elizabeth. I asked if she wanted anything; she only wanted some fries. I left the ladies and headed down and picked up the food.

Sweet, I thought as I pulled back into the driveway a few minutes later. I get to hang out with the girls, maybe drink some beer and watch the Lakers game.*

They were in the living room painting their nails and watching Black Swan.

I gave them their food and started assembling mine. 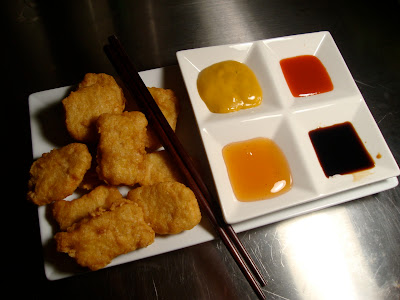 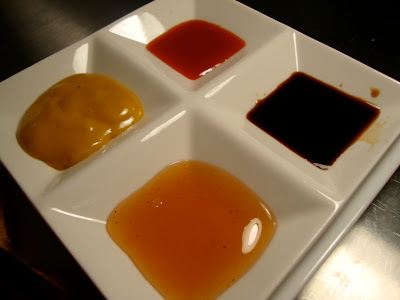 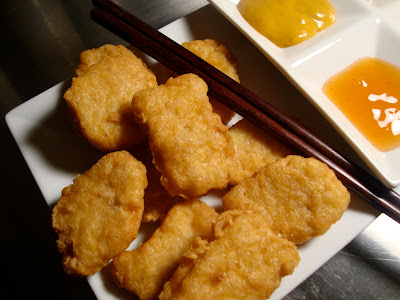 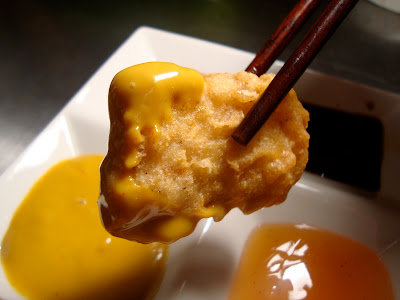 "Are you going to be joining us?" Elizabeth asked.

"Pay attention," I said, "and you will see how genius creates a legend."

Last month I bought a little dish at Cost Plus, divided into four compartments for sauces. I do not know if there has ever been a piece of serveware more specifically designed for me. (Unless, I guess, there is a condiment dish with five compartments.) I used McDonald's hot mustard sauce (one of my favorite condiments ever), sweet and sour sauce, teriyaki sauce, and Tabasco sweet & spicy sauce. (That last one, you may remember, I wrote glowingly about in September after I bought a bottle in New York. According to Tabasco's website, the sauce isn't available in California, so I had Elizabeth pick me up two bottles when she was in New York for Christmas.)

I cannot describe how much fun it was to eat McNuggets this way. It was every bit as exciting as it was when I was a kid. The hot mustard, I have to say, was my favorite of the bunch.

So, dear readers, if you, like me, remember the Shanghai McNuggets fondly - or if you've never heard of them and think they sound good - please leave a comment and, when I make another attempt at convincing McDonald's to bring them back I can include a link to this. And then, most likely, McDonald's will ignore all of us. But at least we will have tried.

*I missed seeing the Lakers win by 55 points, the third largest victory margin in their history. You might think I was upset. But seeing Natlie Portman and Mila Kunis in a sex scene together made up for a lot of that. Well, all of it, really.

I don't remember them but I want them!!!!

I want them too. Oh - you meant some nugget thingies...

These nuggets sound fantastic - and the fact that you found a clip with now defunct Canadian Airlines included makes it even better.

So how'd the shower go?

I want, strike that, must have that dish!! I, like you it seems, could not survive in this world without a multitude of condiments!

While I don't remember the Shanghai nuggets (perhaps because I was a bit young at the time) I'm quite certain I would I would enjoy them (as much as one can enjoy fast food that is). In fact I may try a little something like you have here should I ever venture over to Mc D's!

Michelle: Yes, you do.

Nosh: I could get you nuggets.

Ben: Thank you. Yes, if youtube has no other value, reminding you what commercials were like in the 80s is worth the billion+ those guys made for it.

Random Musings: This dish was $3.99 at Cost Plus - the best thing I have bought in months, if you don't count the family-size box of fried cheese that was half price.

That is the most hilariously casually rascist advert I have EVER seen. I've never had the nuggets, and I assume now I never will. But I say BRING BACK THE SHANGHAI NUGGETS just for that awesome advert.

You certainly have to take a shower after having "chicken" mc nuggets!

we need them nationwide! i loved these things.

Exactly! Keep up the comments, McDonald's has to see them. And friends they make think it's a movement.

Oh my god, I loved those things!! I made my parents go to McDonald's a couple times a week so I could get them. They definitely need to bring them back!

Please oh please bring these back! If only for the sauces.

I remember that they were only in certain areas. We had them at our house in Knoxville Tn. But when we went to my grandmother's near Chattanooga which is about 100 MI away they had never heard of them, and thought we were crazy. I loved them. So did my family.

Omigosh!!! I LOVED THE SHANGHAI MCNUGGETS!!! I tell my kiddos about them all the time. Pleeeeeeeee McDonalds—BRING THEM BACK!!!

It seems unlikely. But in the news today: New Spicy McNuggets coming September 16.