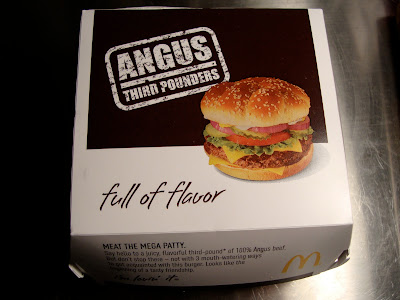 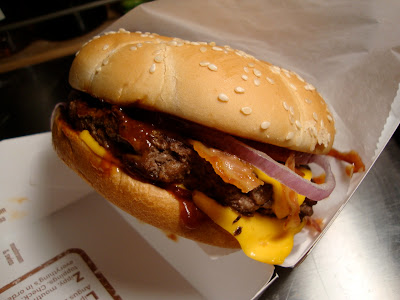 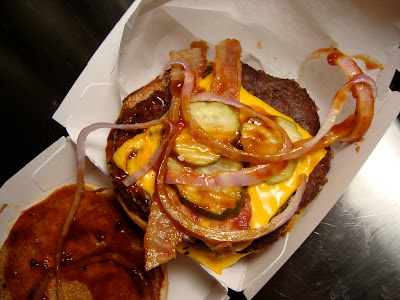 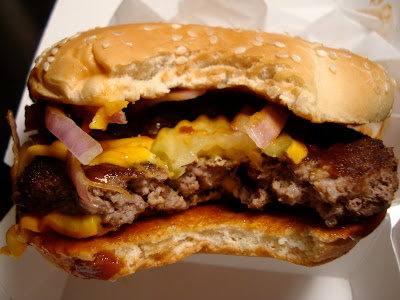 When I heard a couple weeks ago that McDonald's was "coming out" with a Chipotle Angus Third Pounder, I smiled to myself. I tried the thing more than two and a half years ago - it was the first ever post on this blog. But I don't expect that you've read it; that was back in 2008, long before anyone read this. It was a ghost town here. Tumbleweeds rolled around. D.B. Cooper would stop by and leave comments. I didn't even read what I wrote half of the time; I let my cat walk around on the computer, ran spell check and hit "publish." (I believe this is also how James Patterson has written his last four novels.)

Ah, but how things have changed, and now my empire is nearly complete. I believe I am up to fourteen readers. ("When Alexander saw the breadth of his domain he wept, for there were no more worlds to conquer" - Hans Gruber)

So why not try this "new" burger again, two and a half years and 537 posts later? One more time for the sweet souvenir. Maybe I will even make this my last post ever, bookending the blog with two brief bursts on this bbq burger.

The "Angus Third Pounders" are 5.5 oz prior to cooking. I'm not a big fan of McDonald's meat so the last thing I usually want is more of it, but the Angus patties definitely taste better than the other patties McDonald's serves. (I was given a Big Mac the other day and I ate it, my first in almost 15 years, and I hated it.)

The burger comes with a slice of cheese, pickles, bacon, red onion, and a chipotle barbecue sauce. First things first: the bacon was disgusting, inedible junk. One piece of it looked translucent, basically a brittle piece of solidified fat. I used to think it was simply not possible for fast food bacon to be any good, but lately both Arby's and Wendy's have been serving sandwiches with decent bacon, so it is possible. McDonald's chooses not to use quality stuff.

And the red onion was not good, either; it was strings from the outer part of the onion, those moisture-less rings you can't really eat. The pickles were good, thicker than you get on other burgers, and the cheese was the same fake-looking stuff you get on any McDonald's burger: not exactly good, but pretty harmless.

But the two most important things here are the patty and the sauce. At least to me. The patty was average by fast food burger standards - which, as I wrote, is pretty good by McDonald's standards. And I would have to say the same for the sauce. McDonald's barbecue sauce is probably my least favorite of any chain's barbecue sauce, a sickly sweet mix of ketchup and corn syrup that tastes as if a couple packets of sugar are dumped into each container.

So the chipotle barbecue sauce is certainly a little bit better than that, but devoid of much flavor. One only need watch Food Network for, oh, five minutes to learn that a chipotle is a dried, smoked jalapeno. (Actually I should rephrase that: one used to only need watch the Food Network for five minutes to learn that, back when the Food Network actually taught you things, before it became a series of travel shows and reality TV contests.) So a chipotle should have some decent heat to it. But there was not really any heat to this sauce; I imagine only a slight amount of chipotle powder is used in each dollop of sauce.

So, while it's one of the better McDonald's burgers I have ever had, it's nothing very good. It could have been a lot better, with some quality bacon and a spicy sauce, but I don't think quality is one of McDonald's main concerns when making its burgers. And I don't think I will ever order one of these again.

I will continue to stick with McNuggets at McDonald's - both eating them and continuing my futile-yet-noble campaign to bring back the Shanghai McNuggets. I was just kidding earlier when I suggested I might make this my last post. I will not stop until those McNuggets return.
Posted by JustinM at 11:22 AM

It's funny that you say the pickles were the only "good" part of the sandwich. I would have automatically removed them leaving only the, well, you know.
I tried the mushroom & Swiss version about three years ago - once. It didn't come with pickles.
It was actually satisfying but I haven't felt suicidal enough lately to try it again.

Although one can't change the past, it's good to know that the legacy of this blog won't be tainted by it's final chapter (even as well written as this one is).

It's one thing to get a McDouble off the Dollar Menu - the thing costs a little over a buck. But when you start talking about $4 or $5 for something like this, or the Wendy's chicken sandwich... I mean, why not just go to In-n-Out or Fatburger?

"Ah, but how things have changed, and now my empire is nearly complete. I believe I am up to fourteen readers."

I totally loled in real life.

Are you going to write about the Big Mac?

If you want me to, sure. I am a servant to my readers. I'm just not sure it would be that interesting.

Or that you might not survive! Spoken by someone who has NEVER eaten a McDonald's hamburger of any kind.

Don't you remember Downsize Me?

Just so you know, I prefer reading this blog to the more well-known ones like Grub Grading, WIBIA and Epic Portions.

That burger looks crappy though, I don't like McD's bacon, but the bacon cheese 1/3 pounder isn't half bad.