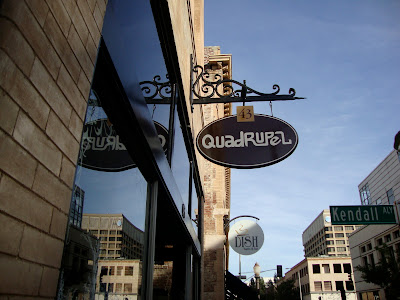 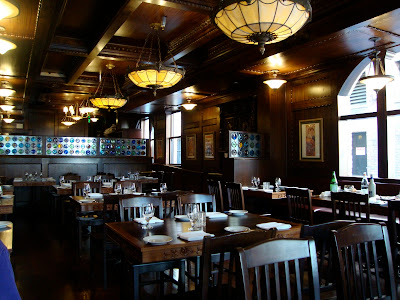 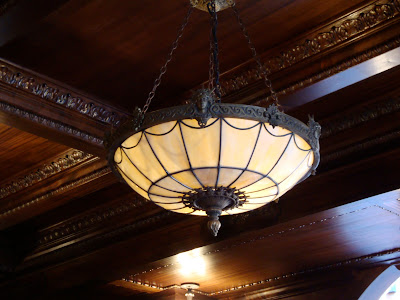 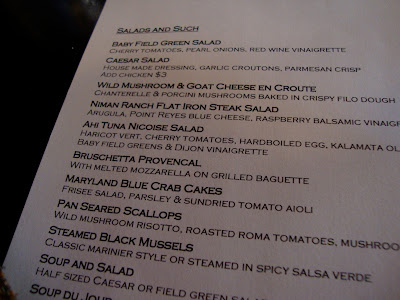 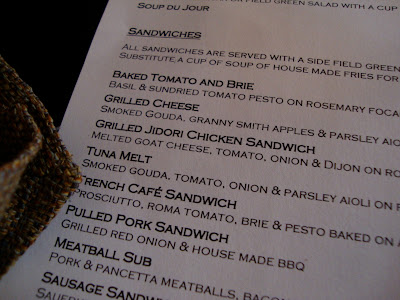 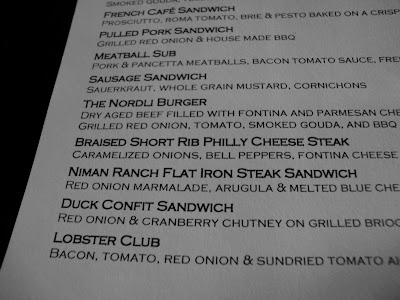 My friend Carla and I were trying to come up with a lunch plan. I suggested dim sum but she wasn't in the mood for any Asian food. I suggested my other favorite, barbecue and we were debating which 'cue joint to visit when we just decided to go to lunch in Old Town and walk around for a while. It was the middle of January and an 80 degree day; we figured we'd be idiots not to take advantage of the weather.

I'd been to Quadrupel Brasserie twice - with a group of friends on the second evening they were open, when most of the dishes were good but a couple needed work, and on my birthday last summer, when the food was good but I'd had quite a few beers and probably would have enjoyed Burger King that evening. On both occasions Carla had been with me, and not long ago she informed me that she wanted to return to Quadrupel. I told her something that she did not know: the brasserie is now serving lunch Tuesday-Friday. We decided that would be our destination.

There were several tables occupied when we entered (they all finished before us and I snapped that second picture after they'd left, which is why it looks deserted) and we took a table against the wall. I was given a lunch menu; Carla was given a dinner menu. She expressed surprise when I told her that I was deciding between the burger and the pulled pork sandwich, as neither item was on her menu. I made my decision and gave her my menu. But first things first: 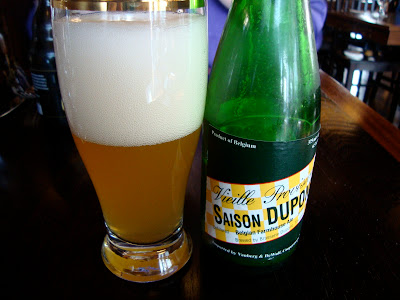 I started with a Saison Dupont. Overall I'm not a big fan of Belgian beers. I know they are regarded by many as the best in the world but the vast majority I have tried are far too sweet for me. (My friend calls them "Princess Beers," a somewhat harsh description but one that makes me laugh.) The notable exceptions are the Christmas ales, many of which I enjoy... but not on a hot January afternoon.

When Quadrupel first put up a website prior to opening, they had several American beers listed, some that I like very much. However that idea was done away with and all they offer now are Belgian beers. But between Scotch and nothing, I'll take Scotch. Saison Dupont is perhaps the most famous of the Belgian "farmhouse" ales, made to refresh farm workers during the harvest season. As such it is a refreshing, peppery, citrus-flavored ale. (But still very sweet.) I nursed this one beer throughout the whole meal. 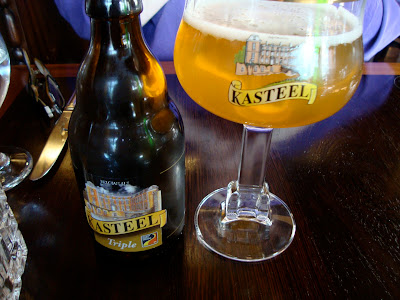 Carla had the Kasteel Triple, an 11% abv pale ale that is the exact kind of sweet stuff that I usually avoid drinking. But she enjoyed it. 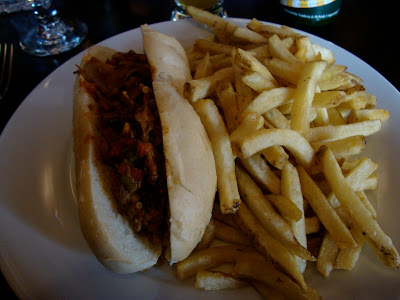 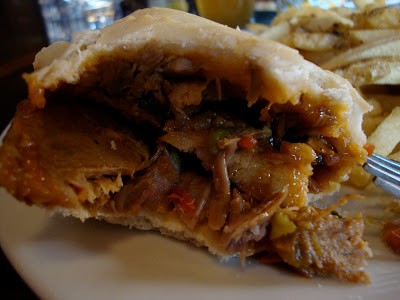 I ordered the pulled pork sandwich. I had heard that Quadrupel's burger is good and when we walked in I saw a guy had one in front of him and it looked really good. But places with good burgers are numerous in this town, so I decided to take a chance on the pulled pork sandwich. Which was a mistake. The pork was not pulled, it was a few slices of pork thrown haphazardly into a roll.

And there wasn't very much of it. It was certainly tasty, no doubt, but I was still disappointed, and not just because I was misled about the pork being pulled. My plate was $16 - twelve bucks for the sandwich plus a four dollar surcharge for substituting fries for salad - and I was done with the sandwich in just a few bites. I should have ordered the burger. Or, what Carla had: 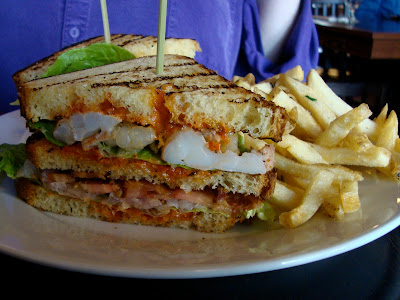 The lobster club sandwich. This was much more attractive than my sandwich, and Carla was nice enough to give me a bite. It was delicious. The bread was slightly grilled, the lobster was wonderful, and the bacon was perfectly crispy. There was a sauce on it that I could not quite place (looking at the menu I see it is advertised as a sundried tomato aioli, although that surprises me) but we both loved it. 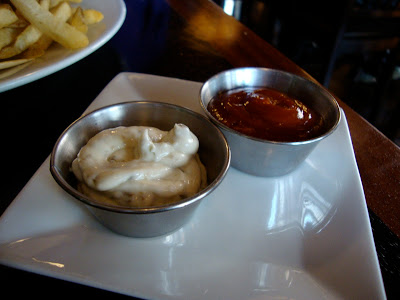 The fries at Quadrupel are very good, and we both got them to accompany our sandwiches. We received two dipping sauces: chive mayonnaise and cumin ketchup. They were both delicious. We finished the small containers and requested more. We were brought containers almost twice the size.

"Maybe if we finish these and ask for more, the next round will be brought out in pint glasses," I suggested.

But we could not finish the second round of sauces. 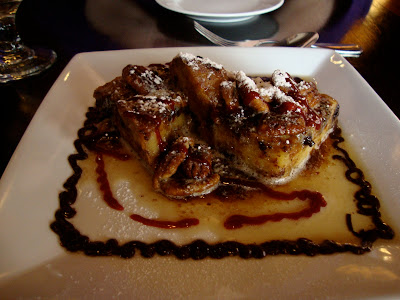 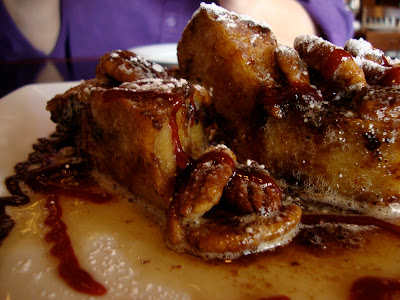 Carla decided she wanted to order dessert and asked if I would have any. I said no. I almost never eat desert with dinner - if I'm still hungry at the end of a meal I want more real food, not dessert - and I don't believe I have ever ordered dessert with lunch. But I said I did not mind one bit if she ordered one.

She selected the pecan bread pudding, which took about twenty minutes to arrive. It smelled very good but I did not take a bite, despite the fact there was plenty of it. Carla took quite a bit home with her.

I would not be opposed to returning to Quadrupel for lunch. I was not a big fan of my pork sandwich, but then again I ordered something called a pulled pork sandwich in a Belgian cafe; I should have known that wasn't going to be the best option. The lobster club was delicious and I really would like to try that burger.
Posted by JustinM at 1:04 PM

dude PP that's wack. you should be able to choose b/w fries and salad with a sandwich. wendy's lets you do it!

I hear ya'. $4 seemed an excessive upcharge for fries... but at least they were delicious and there were lots of them. The sandwich was just a few slices of pork, though; that was much more disappointing.

The lobster club sandwich doesn't even look real it looks so amazingly good.

Cumin ketchup. Love that idea and am so stealing it. And, of course...the lobster club. lobster and bacon are what every rogue Jewish girl dreams of.

I NEVER have dessert in restaurants - unless it's bread pudding and this one looks awesome.
Something about the warm, rich, soft and creamy caramel and cinnamon which gets me every time.
I can't wait to try this. After a burger, of course. (or the lob sandie).

I would love to try the lobster club! But considering they don't serve lunch on the weekends, it seems like it won't happen anytime soon.