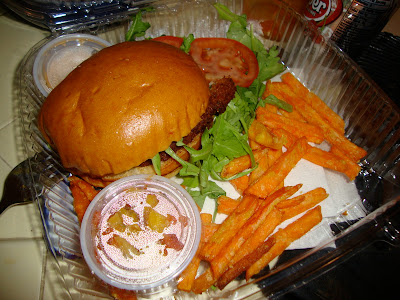 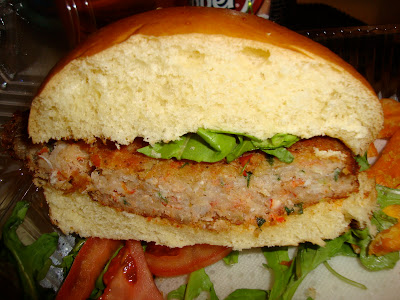 On Friday night, Elizabeth brought me home half a lobster-and-crab-cake sandwich and some sweet potato fries. Because she's awesome. And so was this sandwich. It was from Larchmont Bungalow in Los Angeles. Normally when I hear something like "lobster and crab cake" I immediately picture a fried lump of indeterminate puree. But this tasted like both lobster and crab, with a chipotle aioli and tropical salsa. I get more and more provincial as I get older and I rarely enjoy going west of downtown (to be honest, I rarely enjoy going west of Fair Oaks Ave in Pasadena) but I would gladly venture to Larchmont Village for a fresh version of this sandwich. 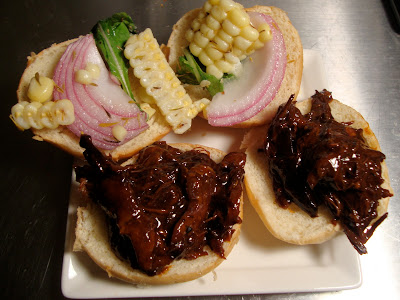 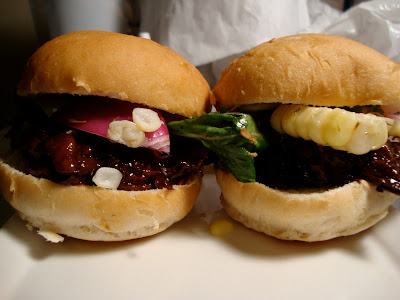 For years I have seen the containers of pulled pork at Whole Foods but never had any desire to try it. It sounded good the other night, though, so I got a small container. At home I spread the pork on two sliders buns and topped it with corn & arugula salad - something I have been eating for years at Whole Foods. The pork was very good but the sauce was not; each bite seemed to vary between either being too sweet or too salty. I have no idea how this is possible, but that's what happened. I am willing to try the pork again, but I'm not holding out much hope that it will be better. 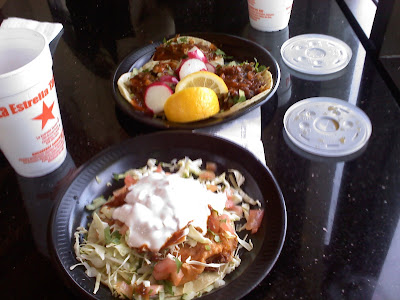 We ran out for lunch on Saturday but we had to be quick - Elizabeth couldn't be away from the computer for very long for something she was working on most of the weekend. We went to La Estrella. I had a fish taco and an al pastor taco; Elizabeth had two carnitas tacos. Everything was great and the four tacos and two sodas filled us up and cost just over nine bucks. I've said it before and I'll say it again: I have no idea why I haven't been eating at La Estrella for years. (Other than that I'm a moron most of the time.)
I realized when we received the food that I had left my camera in the car, but I've taken enough pictures of La Estrella in the last couple months, so I figured my cell phone camera would suffice. 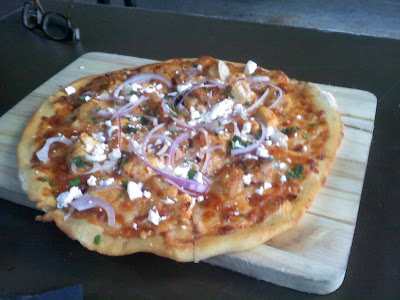 Saturday afternoon, when Elizabeth was finally done working, we went out for a few drinks at NeoMeze to celebrate. Our friend Carla met up with us and she ordered a tandoori chicken pizza (only $5 during happy hour.) The three of us snacked on it. I had not brought my camera with me (intentionally this time, unlike lunch) so I used my phone camera. It's not a great picture but oh well. 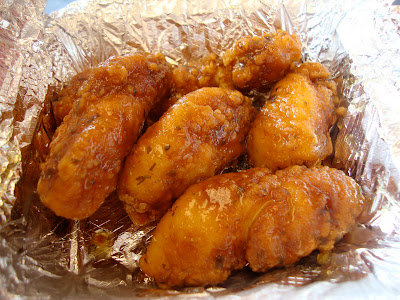 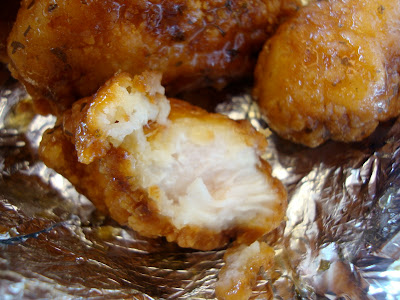 When I tried Church's boneless wings last summer, just after they'd started their campaign with the different sauces, I ate a cilantro-lime flavor that I thought was great. The guy working behind the counter confessed to me that it was their least popular flavor by a considerable margin. So I was not surprised a couple months ago when that flavor disappeared and was replaced by a "teriyaki" variety.

What did surprise me was that the teriyaki flavor only seemed to last a couple weeks before it was replaced by a "jalapeno-lime." This did not bother me; of the several flavors of Church's boneless wings that I have tried, the teriyaki was my least favorite. Obviously, I had to try the new jalapeno-lime wings. And they were very good. Not as good as the cilantro-lime had been, and certainly not as good as the sweet & spicy, which is my favorite. But still very good. 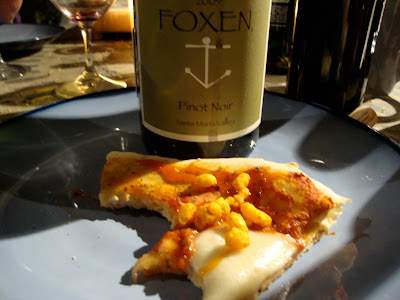 A bottle of Foxen Pinot Noir and a slice of homemade pizza with fresh mozzarella and jalapeno Cheetos. Is there a story there? Indeed there is. 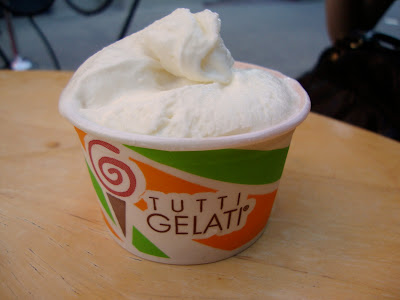 I apologize to my friends and readers back East or in places where the weather sucks right now... but it was 85 degrees and bright blue skies in Pasadena yesterday. We had walked around Old Town for more than an hour, doing a little shopping and enjoying the weather, and Elizabeth announced she wanted a gelato. Her command is my wish, so we stopped for some. She had white chocolate and loved it. 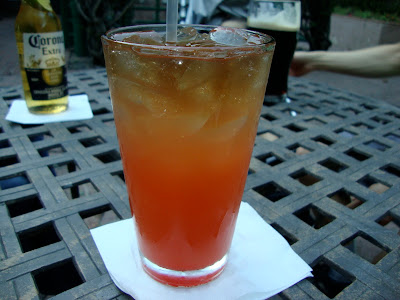 For the hot day, I donned a shirt I had never worn before - a guayabera my brother bought me in Cuba a couple years back. After shopping and eating gelato, we stopped to meet a few friends for a drink. In the spirit of trying new things, I ordered something I never have before: a Mai Tai. It was fine. But it only confirmed that I'm a beer and wine guy.
Posted by JustinM at 11:53 AM

PP- how was carla's pizza?

Quite good. The first time I tried this pizza, a couple months ago, it had been left in the oven too long and had that burnt-cheese texture that a pizza gets. But this one was done very well, and there was another cheese on it, I think feta.

I can see Lucy's forehead.

that lobster and crab cake looks great! nothing like a really satisfying sandwich of deep fried seafood, is there?!

I've never been a big fan of crab cake sandwiches. I love crab cakes, but I rarely enjoy the contrast between the fried cake and the bread. But this was definitely an exception; it was unquestionably one of the best I have ever had.