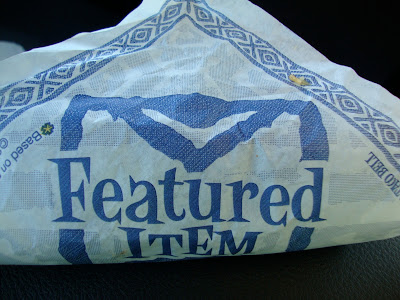 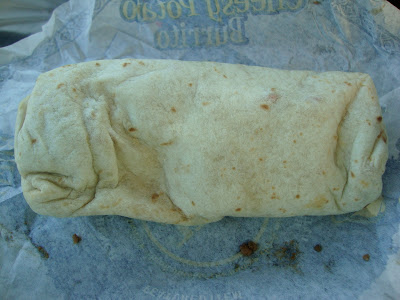 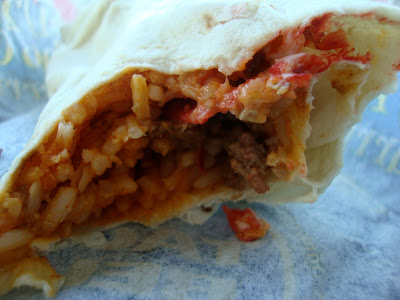 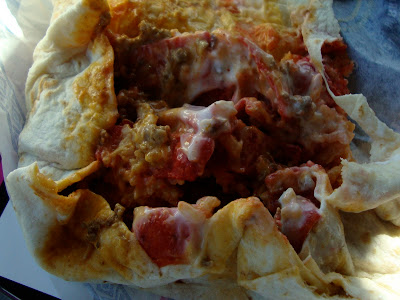 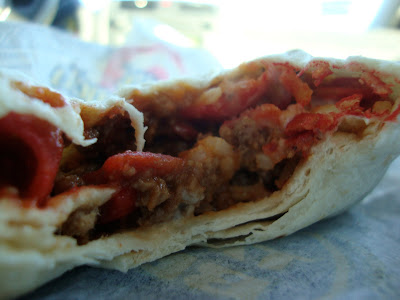 Taco Bell is a funny one. Usually they just recycle the same items - nacho cheese, rice, beef, tortillas, etc. - in new combinations, with new names, and call it a new product. This time around, all the usual suspects are there (including the always present "low fat sour cream") but with a new wrinkle: Flamin' Hot Fritos.

I was pretty sure I knew exactly how this was going to taste, but I was intrigued by the addition of the Fritos. I prefer other varieties, but the Flamin' Hot isn't bad. And I always like contrast of textures when chips are in a sandwich. Plus, this thing only costs 99 cents (and it's "only" 510 calories, which makes it health food compared to some of TB's burritos.) And lately I have an ulterior motive for visiting Taco Bell: I can stuff my pockets with packets of their Border Salsa, which I have taken to putting on lots of foods.

(BTW, the phrase "pockets with packets" is a very enjoyable one to say. Try it right now, you'll see what I mean.)

So I stopped by Taco Bell, ordered a burrito for a buck and some change, and took it out to my car to eat. It wasn't particularly big when I unwrapped it - although expecting it to be big for that price would have been silly - and, upon first bite, realized my instincts were correct: I knew exactly how it was going to taste. It tasted like many other similar burritos from Taco Bell. I had never had this burrito before, but I've had it many times, if you know what I mean.

The addition of the Fritos was nice. They indeed provide a fair amount of heat. I didn't even have to add extra hot sauce for this burrito; normally I add hot sauce to anything I eat from Taco Bell to increase the (usually bland) flavor.

Would I go so far as to call this good? No. Your life will not be missing much if you don't eat this burrito. But, much like Taco Bell's Chicken Flatbread Sandwich, this is a cheap, inoffensive snack. You could do a lot worse at Taco Bell.
Posted by JustinM at 10:11 AM

I've never tried Fritos Flamin' Hots. I tried the Cheetos Flamin' Hot Crunchys and have to say - as much as I LOVE spicy stuff, these are really too spicy for me. I know - what a wuss! I'm sure the addition of the Fritos added an extra new and picante facet to the Taco Bell pallette.

BTW, speaking of calories, the piece of Marie Callender's Razzle Berry pie I had last night was only 660 calories; half that of one of their muffins and only 20% more than your burrito.

I'm sure there's a reason you were at Marie Callender's. I just can't think of it.

"So, after leaving Robin's, he left for Taco Bell, in his search for something better...:

Well, it was a disappointing meal at Robin's, but let's not get carried away... it was still a lot better than Taco Bell.

Ah, yes. I was waiting for the jibe.
I was there to pick up a pie, during which time i had plenty of time to read the "nutritional" info card.

My last time eating at Marie Callendar's was in Victorville in the fall of '98. Yes, I still remember it: it was that bad.

All this and only 84% dietary fiber...next stop: the vomitorium and then, Biggest Loser.

I looked with sympathetic awe and fearfulness upon the man, who in mid-winter could eat three meals in one day at Marie Callender's. Low cholesterol seemed scorching to his heart.

(I might have gotten a couple of those words wrong; I haven't read Melville since high school.)

That man would be quite Bulking(ton), indeed.

Well we all need someone we can bleed on...

I saw a commercial for this on TV yesterday and was coming here today to make it a suggestion. You must be psychic.

Am I the only one that craves Taco Bell's rice? In a burrito, usually.. but even if they just started selling a rice burrito, I'd probably eat it. I don't know why.

Ha! My prayers have been answered!

TBH, I haven't even tried this thing yet myself, so I have no business suggesting it to you. It is pretty cheap though, so I might try one this weekend and report back with my findings. This is one of the more "promising" fast food reviews you've done lately. Those Jack in the Box fries look horribly lopsided.

I mean, there's not much to it, but at least you'd only be out a buck, so you might as well try it.

I went to Church's, too, to try the new "chicken minis" but the one I went to didn't have them. Oh well.