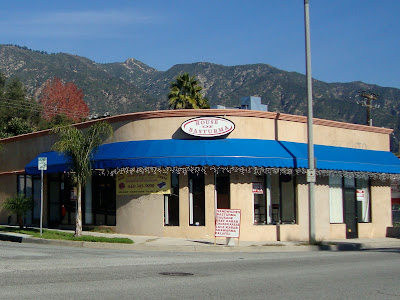 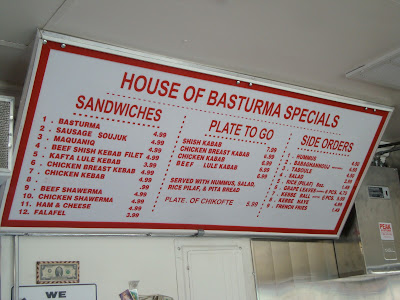 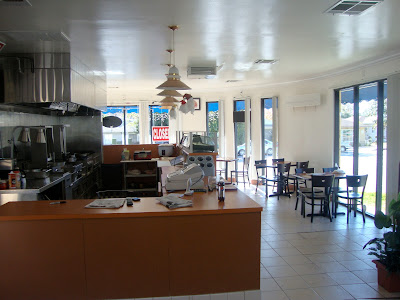 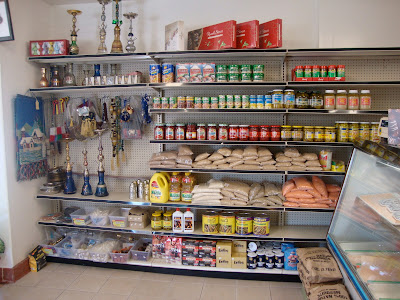 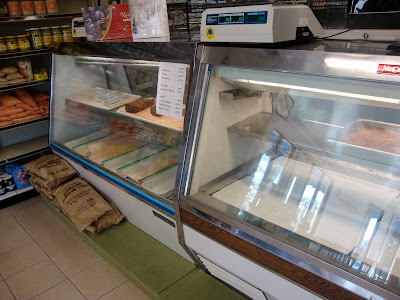 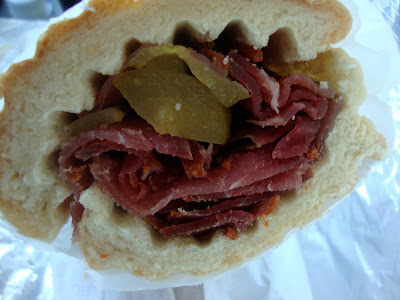 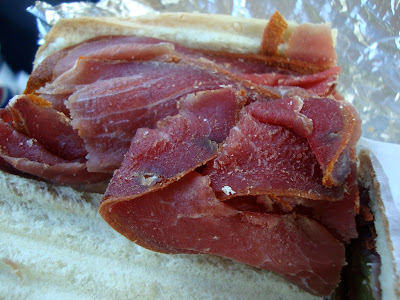 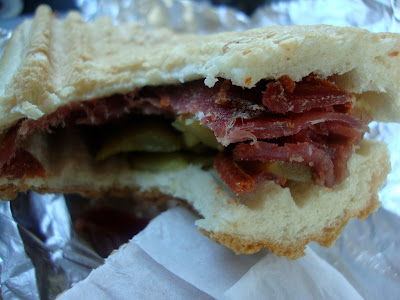 There are some things that you never forget trying for the first time. I remember my first slice of New York pizza, on a sweltering July day (not long after enjoying the quintessential experience of drinking a can of beer wrapped in a brown bag on the stoop while waiting for a friend to arrive home from work) and I knew that I could never judge pizza in California the same way ever again. My first pint of Guinness in Ireland was the best I have ever had. My first xiao long bao dumpling burned the roof of my mouth, which didn't heal for days, but not once did I regret it.
And I will never, ever forget the first time I tried basturma. My boss at the time was Armenian and one day, opening a sandwich the size of a frisbee that his wife had made him, he said "You say you love garlic? Try a bite of this."

Basturma - air-dried beef rubbed with spices, especially garlic - is one of the most powerfully-flavored things you will ever eat. Imagine a piece of pastrami or bresaola dragged through a garden of garlic and cumin. If that thought brings a smile to your face you will probably savor each bite, though in truth I have known people who love garlic and have tried basturma and cringed, proclaiming "Wow, that's too intense."

If you eat a great basturma sandwich on Monday, do not be surprised if someone asks you Wednesday if you had garlic for lunch.

More than two years ago I heard a rumor that the owner of Sahag's Basturma in Hollywood - described by many as the best basturma in the world - was going to open a shop in Pasadena. I greeted the news with excitement but as the months went by with neither any news nor sign of opening, I resigned myself to the fact that it wasn't going to happen. In the middle of 2010 I heard that the restaurant was still going to open, although not with the same owners. Either way, the chance to eat a basturma sandwich in Pasadena made me happy.

House of Basturma is up on Washington Blvd, less than a block from the closed St. Luke's hospital. (The address is in Pasadena these days, although my dad's birth certificate lists his place of birth as St. Luke's - in "Rural Pasadena.") I stopped by on a clear, cold day to get a sandwich. There was no one in the place except a friendly guy behind the counter. I glanced at the menu briefly though I knew exactly what I wanted: "A basturma sandwich, no tomatoes please."

He went behind the counter and sliced the meat for me then went behind another counter and assembled my sandwich. The total was $7 for it and bottle of (completely flat) Pepsi. I took it to my car.

It was not a big sandwich but it was certainly an attractive one. Although I usually like my basturma sandwiches with a piece of crisp lettuce and a thin smear of mayo, this one only had meat and pickles. But the aroma was unmistakable the minute I unwrapped it. I breathed it in for a couple minutes before taking my first bite.

It was very good. The bread was outstanding; soft enough to pull apart with each bite but with just a bit of firmness to it. Like any good piece of basturma, each bite leaves you scraping your tongue against your top row of teeth to determine if you still have some on your tongue. The flavor lingers for several seconds. And then hours.

I only ate half the sandwich in the car. Later that evening I added the lettuce and mayo that I like and it was even better. Next time I visit House of Basturma, I will probably try something else - soujuk, perhaps - and take a basturma sandwich home with me to doctor up with olive oil and extra pickles. It is not the best basturma I have ever had, but it was very tasty and House of Basturma is definitely a welcome addition to my lunch options in Pasadena.
Posted by JustinM at 10:13 AM

Never had. Looks good though. Did your ex-boss have anything else in his sandwich? What other toppings are the norm? I think I would have to try it with the tomato as this looks a little dry.

He had lettuce, mayo, and I believe pickles.

I think the norm is just pickles and tomatoes, and sometimes you will get a few things on the side, like olives, pickled turnips, and hot peppers.

I would not go so far as to call it dry, but it definitely could have used a little something else, so getting it with tomatoes is a good idea. I don't really like them, however.

Mmmmm... I have never heard or seen of Basturma but I think I shall have to try it now.

Gotta try this Batsurma. I 4got but someone else blogged about this place recently.

You don't like tomatoes?? Sounds something a girl would say! Love garlic but the overall flavors, including the garlic, need to compliment each other.

basturma is originally from the area where my grandfather is from in Turkey, Cappadoccia (there was once over 1 million Greeks living there before the exchange of the 1920s). My dad goes CRAZY for basturma - he gets his from C+K papacristos and usually puts it in scrambled eggs.... a little goes a long way as you well know. Great post Justin!

Thanks Anna. I love when this blog contains actual useful information. Basturma (or Pastirma) is orginally considered Turkish. It's fascinating how many foods have been introduced to the world in the different diasporas.

That looks amazing! I've never even heard of it before. I love learning about new foods - thanks :D

Ooooh! This looks very tasty. I really should be eating more Armenian treats being a Pasadena resident and all. Thanks for the find.

Emily: It is really good - are there Turkish/Armenian/Lebanese cuisines in your part of the globe?

Gastronomer: Funny, I look at your blog all the time and think 'I really should be eating more Asian foods outside my norm.'

I'm sure there are, but not in the West End of Glasgow. Though actually, having said that, there's a Turkish restaurant down the road - slightly out of my reach price-wise, though. And it would be all poncy, not authentic stuff. I'll just admire your basturma from a distance...

Hmmm... interesting... I thought I knew Armenian food pretty well, but have never heard of Basturma. Looks very interesting though! Can't wait to try it.

Good use of "diaspora".

I live in the same neighborhood as House of Basturma. I can think of at least 5 places where I can procure a sandwich like this but they are all different. If sliced too thickly they are almost impossible to eat; the dry-cured meat being too chewy. Some use rolls while some use pita, different "toppings", etc.
If you happen to come to an Armenian market or deli and order one these delights, be careful - do NOT mention the Turkish provenance unless you've read up on the Armenian holocaust - it's a very delicate subject!

I admit a fondness for basturma on pita, although this bread was wonderful.

Indeed, the subject of Turkey is one that is quite delicate. One need only remember "the outrage last month about Kobe endorsing Turkish Airlines - without making a single comment about the Turkish/Armenian issues - to realize that it is a sensitive subject.