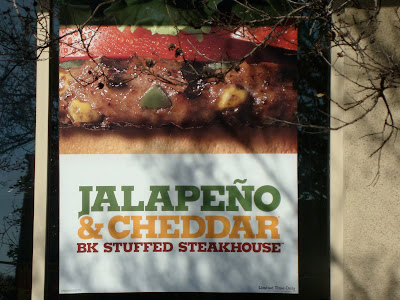 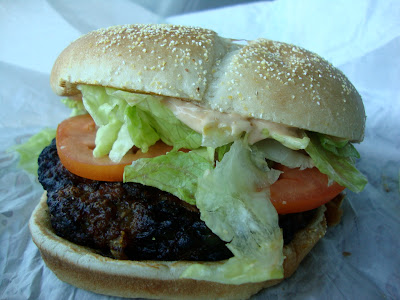 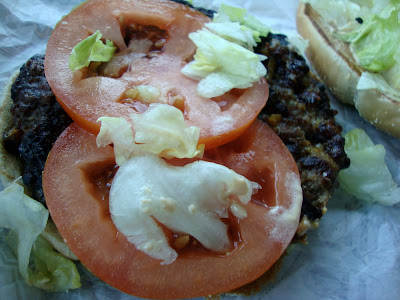 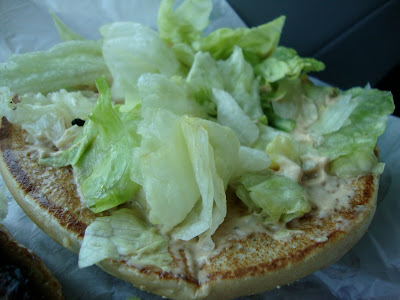 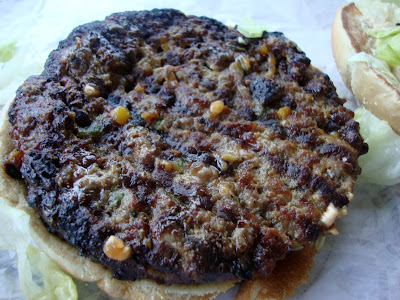 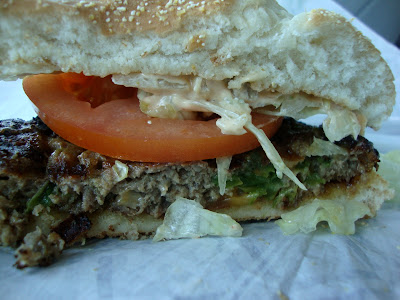 Having spent my entire adult life loathing Burger King, my last visit threw me for a loop. I was in Buellton, just grabbing some dinner at the beginning of a weekend of wine tasting, and tried the Whiplash Whopper, more out of curiosity than anything else. And it was delicious, by far the best thing I have ever eaten from Burger King.

I thought back on a comment a Burger King employee left a year ago when I wrote about the A.1. Steakhouse Burger (which was also not too bad). He recommended not going through the drive-through and always going inside and asking for a burger "straight off the broiler." I had not ordered the Whiplash Whopper that way, but I had waited more than 15 minutes for it, which, while somewhat negating the concept of "fast" food, guaranteed that the burger was fresh from the broiler.

So when I saw a sign in the window of Burger King advertising a "Jalapeno & Cheddar Stuffed Steakhouse Burger," I had two thoughts: first, I appreciate the correct spelling of the word "stuffed," unlike another chain I could name. And second, maybe if I go inside and order one straight off the broiler, it won't suck. So that's what I did.

The burger purports to be a thick patty stuffed with cheese and jalapeno, topped with a poblano sauce. Unwrapping it in my car, I was amazed that the claim is mostly true: though the patty is nowhere near as thick as the promotional pictures make it seem (nobody should ever be surprised by that), it was indeed full of cheese and pieces of jalapeno pepper. The adjective that comes to mind is not so much "stuffed" as perhaps "scattered," but then again a fast food burger that even comes within the vicinity of what it claims to be is the exception, not the norm.

And the thing was indeed spicy. I know that seems like an obvious thing to say, but two years ago I tried the "Angry Whopper" twice and neither time was it spicy; even the jalapeno pieces on it were bland. I was anticipating the same yesterday. But this had a fair amount of heat to it, and the poblano sauce - basically a spicy mayo - was pretty tasty.

So, did I like it? I would not go that far. The Steakhouse patty, while better than BK's whopper patties, still has that charred, not-too-fresh taste to it. But I did not hate it, and when it comes to Burger King that is rare for me. I certainly will not order one ever again: it was $4.82 with tax; not expensive, but not cheap either. And, although the nutritional info isn't available online yet, I would imagine it's in the range of the other Steakhouse burgers: around 900 calories and 50 grams of fat. If I'm going to eat something with those numbers, it better be delicious. And this was not.
Posted by JustinM at 9:51 AM

Wow! This thing almost looks gaggable.
Even better, it inspires emulating on the home grill; with some modifications, of course.
I would add some cilantro and avocado to start -

oh, PP, how could you

When I first heard of this burger, I immediately thought.. "Will Justin try this?" YES. Thanks for your report, although I would most likely NEVER try this one. I used to eat whoppers all the time growing up. Not really into BK these days - plus there aren't that many in PDX.

I know how rarely you eat burgers - don't waste it on this one!

I'll give it a try for sure, but it's so rich in calories that I may need not to be addicted to it ;p
Sounds delicious

According to BK's website the burger is 600 calories and 34 grams of fat. While I admit that is way too many for an average-size fast food burger, it's a lot better than I thought.