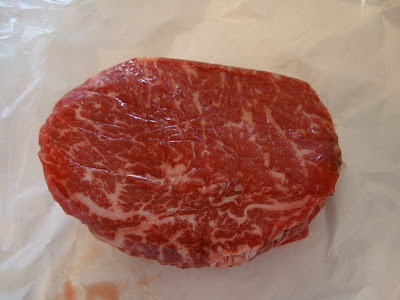 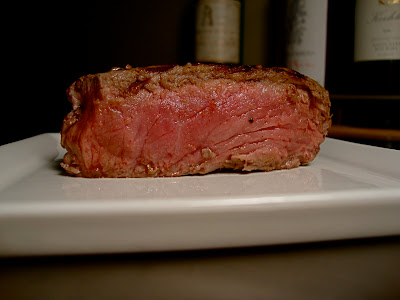 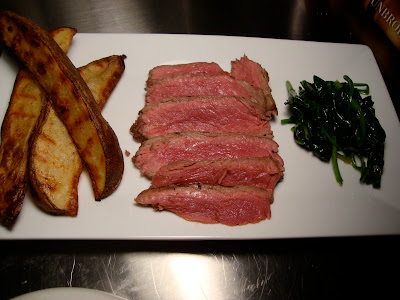 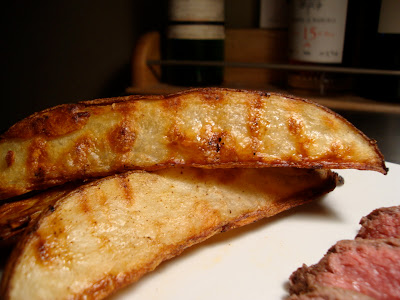 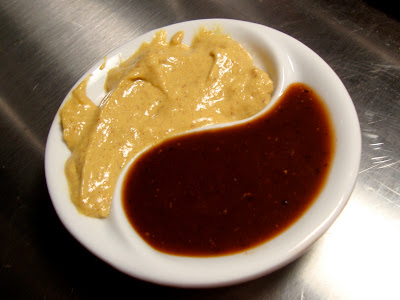 A couple days ago, Elizabeth said to me: "You know what I really would like for dinner this week? Steak. A really good steak."

This works out perfectly, I thought to myself. Taco Bell is launching its "Quad Steak Burrito" on Thursday, I could kill two birds with one stone: write about a new fast food product and satisfy Elizabeth's needs for a really good steak.

Then I started to see a flaw in my logic. Several flaws, actually.

I thought about it some more. Just the other day Elizabeth let me watch six straight hours of football and Huell Howser. I guess I could get her a better steak than Taco Bell. So I picked up a USDA Prime ribeye steak. (It was about ten times the cost of a Quad Steak Burrito and approximately one hundred times better tasting.)

While I let the steak sit out to warm up, I sliced a couple potatoes into wedges and roasted them in the oven with some olive oil, salt, pepper, and paprika. I took them out when they were almost ready (40 minutes) and set them aside to cool down.

I let the indoor grill heat up for a long time. I cracked salt and pepper on the ribeye, put a pat of butter on top and placed the meat on the grill. As usual I admired the sound for a minute. The meat cooked for about seven minutes on one side, I flipped it for another seven, removed it, covered it with foil, and let it rest.

I imagine everyone who has cooked steak has heard the advice to let it rest for five minutes after removing it from the heat. With a thick (this was just under two inches), pricey cut of steak, this is even more crucial. In my opinion, nothing ruins a steak more than overcooking it. If I overcook a ground chuck burger topped with cheese, I'm not going to care very much. But a buttery, prime cut from the center of the cow? I definitely don't want to cook the flavor out of that.

(I did not always feel so passionate about this; then I read Anthony Bourdain's Kitchen Confidential and learned about the lousy cuts of meat that some chefs cram in the back of the fridge, marked "save for well-done" to serve to the "rube who prefers to eat his meat or fish incinerated into a flavorless, leathery hunk of carbon." I thought back to a steak I ordered well-done in Reading, Pennsylvania when I was 19 and how sick I got that night. I've never ordered anything well-done again.)

The whole time the steak was cooking, I had potato wedges on the grill, getting them warmed up again with barely-visible grill marks and a slight crisp to the exterior. When they were ready I quickly sauteed some spinach with a little olive oil and salt and pepper in the wok. I plated all three and took a few pictures, which showed remarkable restraint on my part - I couldn't wait to eat these.

Everything was delicious: the steak was melt-on-the-tongue good. I put some "garlic aioli mustard sauce" in a dish next to steak sauce. The former was great with the potatoes; the latter was completely unnecessary for the steak. It did not need any condiment.

I haven't had the Taco Bell burrito yet, but I'm going to go out on a limb and guess that it won't be as good as this dinner.
Posted by JustinM at 11:07 AM

Thanks, Emily. The old picture had been there for 8 months - it was a wine tasting trip we took last May to the Central Coast, so I decided to change it up a little. Just some of my favorite things from the last couple years.

What are those mugs in the collage?

PP- what do you use for an indoor grill?

It's handy for cooking inside, but to be honest, if I had to downsize my kitchen appliances, it would be the first thing to go, long before the Cuisinart, panini press, toaster oven, or Black & Decker Pizza Hydrator.

The new photo header really looks great, as does that steak! And i never put a whole bunch of thought into how much I spent on meat, but I really see your point. I may need to do a little blind meat taste test soon...

Thanks, Fritos. The most fun part was going through the thousands of photographs and choosing twenty to use.