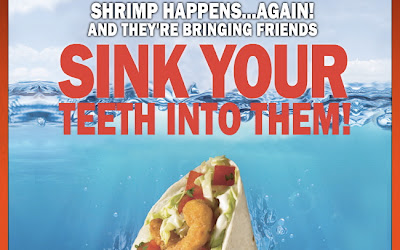 Del Taco is promoting their new shrimp specials with the too-cute title "Shrimp Happens." I love Del Taco, I love fried shrimp. I had to have some. I headed up to the Del Taco on Lake and Union, always an adventure.

(Elizabeth accompanied me on this adventure. She got home from work at 7:01 and called me to see if I wanted to just come outside and meet her. The Lakers were in a 3-point game with thirty seconds left. There was a time ten years ago when you could have told me my brother was in a car accident and I would have watched the remainder of a close Lakers game before even asking if he was okay, let alone going to the hospital to see him. Last night? I immediately turned off the TV and went outside. Am I more mature and able to put things in perspective now, or is this year's Lakers team a collection of unlikable punks who would rather sell unisex cologne and cut their own albums than make any effort on the court? I'm leaning towards the latter.) 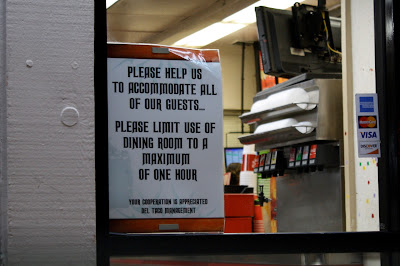 I went through the drive-through, something I hate doing, but I have had too many weird experiences at this Del Taco. Whether it was the woman who kept screaming "Kobe is coming" on one visit, or another woman who was hysterical because she thought the people behind the counter were giving her food to another customer - there were at least a dozen people waiting ahead of her and it never crossed her mind that maybe the food belonged to them - I have never had a good time going inside here. So I didn't.

("Is that guy wearing a Klan outfit?" Elizabeth asked about one of the customers she spotted through the window inside. He was not... but the fact that it was even up for debate says it all.)

It was then that I noticed this sign on the door, asking customers not to spend more than an hour in the dining room. I do not believe I have ever seen a sign like this before. 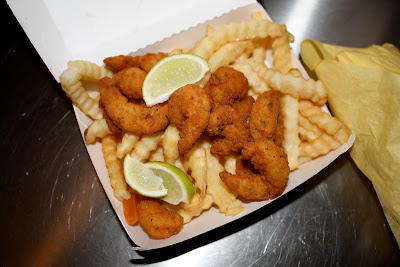 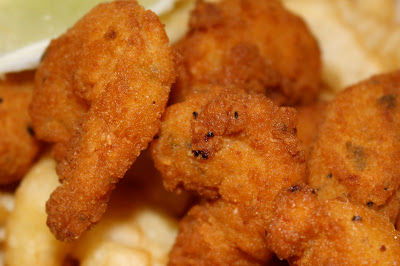 I started with the "Shrimp & Fries" - about a dozen fried shrimp on a bed of fries. The fries were on the limp side (one of many reasons I hate going through a drive-through - you then have to go somewhere to eat, in this case home, and the food quality suffers) but the shrimp were outstanding: crispy, meaty little morsels that would not have been out of place in a seafood restaurant. (And not just Red Lobster; I'm talking about a good seafood restaurant.)

I have never had better shrimp from a fast food joint. I admit that's not a huge standard to live up to, but these were even better than any shrimp I've ever had from Popeyes. 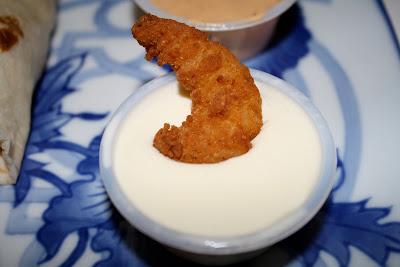 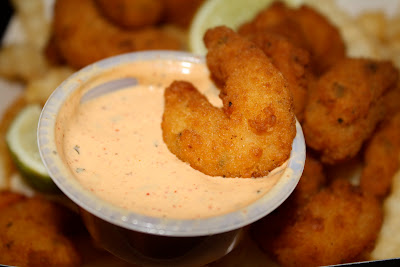 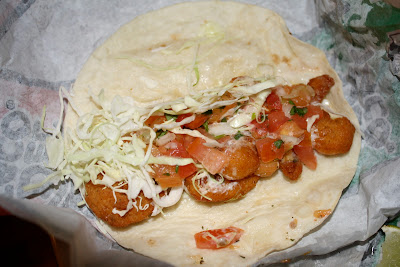 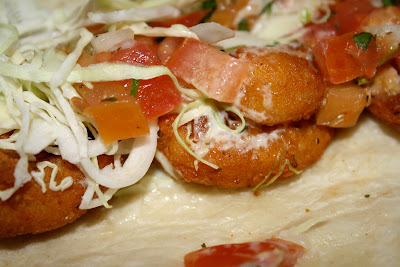 Elizabeth had two Crispy Shrimp Tacos: the fried shrimp with cabbage, salsa, and secret sauce. I asked her opinion just this second. "Delicious," she replied. "I really liked them." 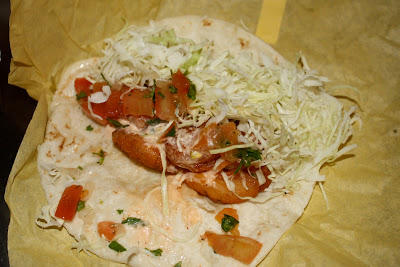 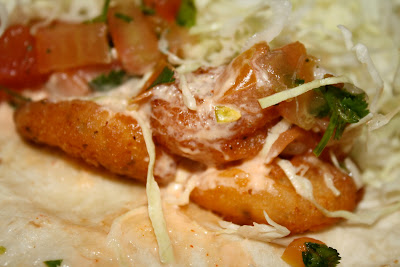 I ordered a new taco, the "Baja Shrimp Taco." It's the same ingredients as the other shrimp taco, only with a "Baja sauce" instead of the secret sauce. The Baja sauce was very tasty, a citrus-y sauce that complemented the shrimp better than any of the other sauces we tried. The salsa on these tacos is basically chopped tomatoes, which I don't feel add anything, but then again I don't like tomatoes. When I get these again, which I'm sure I will, I will ask for the tacos without salsa.

On a scale of 1-10, with 10 being the Lakers beating the Celtics in the NBA Finals last spring and 1 being watching Andrew Bynum go 2-12 (and grab one defensive rebound) against a team with only one player over 6'9" last night, I would give Del Taco's fried shrimp an 8. No fast food shrimp I have ever eaten have come close to that mark.
Posted by JustinM at 9:44 AM

I thought you "hate" tomatoes!

was this last night's lakers/ cavs game that you were watching, pp?

Michelle: I do, and if they're easy to take off, I will. But I was far too hungry to pick through the taco and remove them. I figured it would get mixed in with the taste.

Anon: Indeed it was. ("Last night? I immediately turned off the TV and went outside.")

Do you have a new camera? These pictures are really good... and I'm always a fan of 'shrimp'.

Yes, we got a Canon Rebel DSLR. I'm glad you enjoyed my "prawns."

This was a positively glowing review!!! considering my newfound love of fried shrimp...im kinda jonesing for that taco!!

If I lived in NYC I might miss Del Taco more than In-N-Out.

don't blame the Lakers for their poor play. they obviously aren't being paid enough to put out.

I have to agree with you on the dislike of tomatoes ..just never worked for me. Have to give props..I love this blog, found it by accident but inspired my various blogs. Keep up the amazing work.

Thanks, Jason. That's always nice to hear. Inspiring someone else to write - or do anything positive, really - is a great compliment.

How much did the shrimp and fries cost?

Every time Del Taco has a shrimp promo I know where I'm going for dinner. I've since had the Shrimp Burrito and the tacos but in my excitement I must of missed the Shrimp and Fries.

I think a return trip is in order.

Make sure you get the correct order, Jarrett! Last night my better half got home and was craving shrimp tacos, so we went to Del Taco... when we got home, they had given us fish tacos. Not terrible, but not nearly as good as the shrimp, and she was REALLY craving those shrimp.

I almost always agree with your opinions on food, but I will never understand your dislike of tomatoes, other than just underexposure to real/good tomatoes. As a former tomato-hater myself, once I discovered what real tomatoes taste like, not the tasteless ones you find in many supermarkets, I became a believer.

You live in California with an abundance of farmer's markets. Go to one during tomato season and test your fears.

I don't like the taste or the texture. I have tried tomatoes in quite a few ways over the years - many that are as fresh as can be - and not once have I enjoyed it.