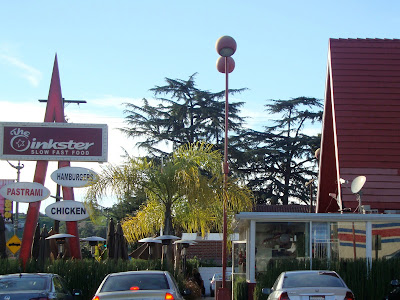 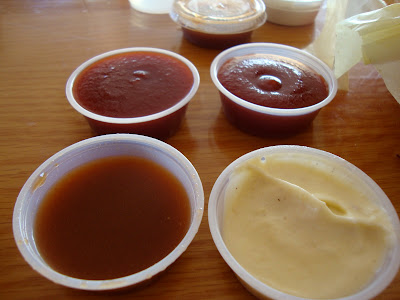 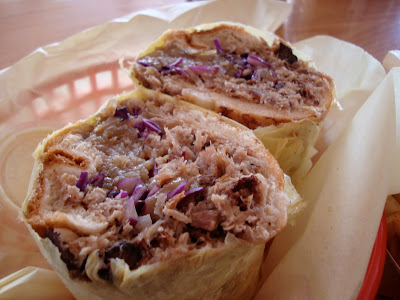 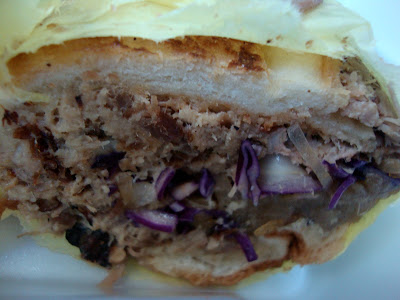 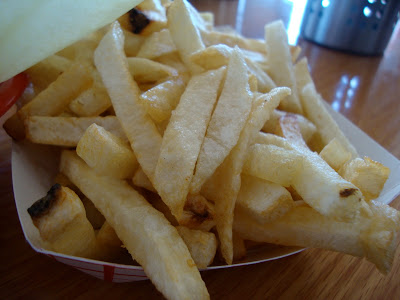 Damn, had it really been more than two years since I'd been to The Oinkster? Indeed it had. Funny how time can fly by like that. There was a time when I loved popping in for a sandwich and a large order of fries every week or two. I even had a routine: eat half the fries, then half the sandwich, then the other half of the fries, and take the remaining half sandwich home. Reheated in the oven, perhaps with some added caramelized onions, the bread getting just charred and the contents merging into a porcine pâté, Oinkster's pulled pork sandwiches were even better. I once added some Zankou garlic sauce to one such reheated sandwich; it was the kind of thing that I could have seen ancient civilizations praying to. Some would call such civilizations "primitive." I would not.

And then I stopped going. Or rather, I stopped eating there. The Oinkster was always popular - it's on Colorado Blvd, not far from Occidental College - but there was never too long of a wait back when it opened. Then Guy Fieri and his "Kulinary Gangsta" tatoos featured the place on Food Network. Bill Simmons of ESPN.com called The Oinkster "quite possibly the best lunch place in the L.A. area."

The lines started snaking out the door, sometimes down to the street. Several times I drove over to Eagle Rock with the intentions of eating there, then noticed a line of 50 people and went to the Habit or Fish King. I can be patient under the best of circumstances. But not when I'm hungry.

Not long ago, though, I got an intense craving for some Belgian fries. This was a Thursday afternoon, almost two o'clock, and I thought Well, maybe it won't be too crowded at The Oinkster. And, although I could not park in the parking lot and had to go up the street a bit, at least there was not a line out of the door. I decided to do it.

Of course, it was still a zoo inside. The line to order was not long, but every seat was taken and people were standing around on the patio, waiting to pounce on the next available table. I ordered a pulled pork sandwich and some fries, took a number, and stood off to the side. A lone seat opened at the counter and I took it. If I'd been with someone I could not have. Sometimes not having friends has its advantages.

I got myself containers of the house ketchup, garlic aioli, chipotle ketchup, and their vinegary, East Carolina-style barbecue sauce. All are delicious.

I looked at my receipt. I had placed my order at 2:07 PM. My food arrived at 2:47. I had two thoughts: 1) their slogan, "slow fast food," is more literal than I realized. And 2) I remember meeting several friends here back in 2007; we ordered, ate on the patio, and left in less than half an hour.

But the food is the most important thing. The pork sandwich was good, but not as good as I remembered it being. The pork was too dry. Now, I love vinegar sauce, so pouring it onto my sandwich and devouring the pork that way is fine with me. But without the sauce, or if I was one of my friends who hate vinegar (the poor bastards), this sandwich would have been disappointing. There was also less red cabbage slaw and caramelized onions in it than there used to be, both of which would have been nice to balance out the too-dry pork.

The fries were good. They could have used another couple minutes in the oil. When The Oinkster opened, I was addicted to their crunchy, fresh-cut Belgian-style fries, but as time went by they stopped being so crunchy and started resembling thicker versions of In-N-Out's fries. Not bad, but not great. Dunked in garlic aioli, though, and who's complaining?

So, was it fun being back at The Oinkster? Not really. I love the concept of the place, and the beer selection is very good, but it took well over an hour to order, wait around, and eat my food, and the whole time I was thinking This used to be better. I guess it's just one of those places I used to love that I no longer do. It happens.
Posted by JustinM at 9:41 AM

I never really got this place. Good beer though.

On my last (strike that, latest) trip there about six weeks ago, I broke down and tried one of the bacon blue cheese burgers. It was really good! Especially when washed down with Eagle Rock Brewery's smoked porter.

The first and last time I went to Oinkster I got a pubic hair fried into one of my fries. Kinda grossed out and the veggie burger wasn't that great. Nor was the PB and J cupcakes. I guess it was better back in the days when you went there back in the days.

I guess my slightly-dry pork doesn't really compare to that. I like that you were only "kinda" grossed out, though. You're a trooper.