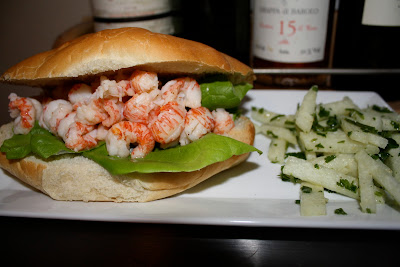 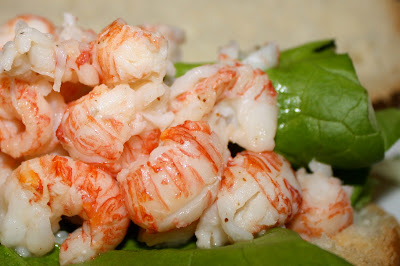 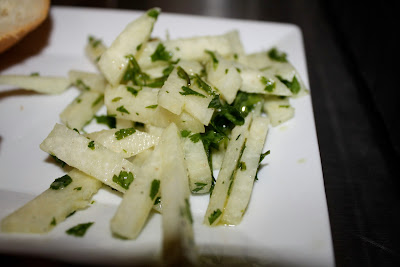 I've mentioned before that the most popular of any post I have ever written - 559 with this one - is KFC's Chicken Littles. This does not disappoint me; it's nice to know there are other people who share my fond memories of those tasty little bundles of greatness.

The second most popular post is one I did of "lobster" rolls I made a couple years ago using Trader Joe's langostinos. (I did a version that I find much superior a year later, which is also quite popular, but not as much as the first.) It has been a while since I'd made them and that sounded quite good. So, in the spirit of making dinners at home after the past weekend of eating too much, I decided to make them again.

The langostino is one dollar more than it used to be - the way of the world, I guess - but still a very good deal, considering I can make two very nicely-sized sandwiches out of one bag. I've paid twice that price for one "lobster roll" in Pasadena that used langostino meat (which the menu did not indicate).

Like most sandwiches I make lately, I purchased two bolillo rolls at King Ranch Market (33 cents each). After defrosting the langostino overnight in the fridge, I sauteed it briefly with some lemon butter (I usually add a shallot but I did not have one) and layered it on the buns with butter lettuce.

As an accompaniment I made a simple jicama slaw: sliced jicama, chopped cilantro, lime juice and olive oil. This has always been a favorite of mine, one that I make far too infrequently. The crispy jicama (apparently called the "Mexican potato" by many people, though in truth I have never heard it called that) works well with the slightly spicy combination of lime and cilantro.

The sandwiches were, as always, delicious. I am glad I eschewed the mayonnaise-based langostino recipe I used to use in favor of this butter version. I do wish I had realized earlier that I was out of shallots, however. The sandwich was missing a little something, and I think the bite and texture of the shallots would have been perfect. 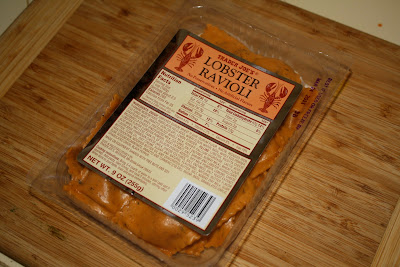 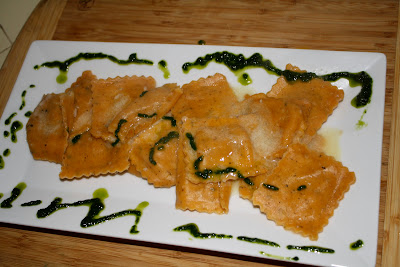 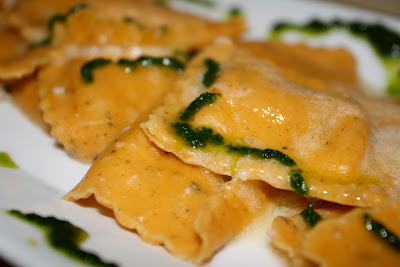 Another Trader Joe's product I have used for years is their lobster ravioli. They are remarkably cheap - I believe $2.99 for the package - and very tasty. The first ingredient listed in the filling is lobster, and indeed there is a lobster flavor to it, but this is not a ravioli bursting with chunks of lobster meat. (Although at that price I don't suppose anyone is expecting it to be.)

These guys only take about five minutes in a pot of boiling water. Any longer and they fall apart quickly. After I drained the ravioli, I topped them with lemon butter and a basil oil I made in the mini Cuisinart; the former melded beautifully with the pasta and lobster flavors, the latter was superfluous. But it looked pretty on the plate.
Posted by JustinM at 10:37 AM

Love the jicama slaw. I added some lime zest to it....fabulous!

That's a very good idea. The jicama is so starchy it can stand up to as many bold flavors as you want.