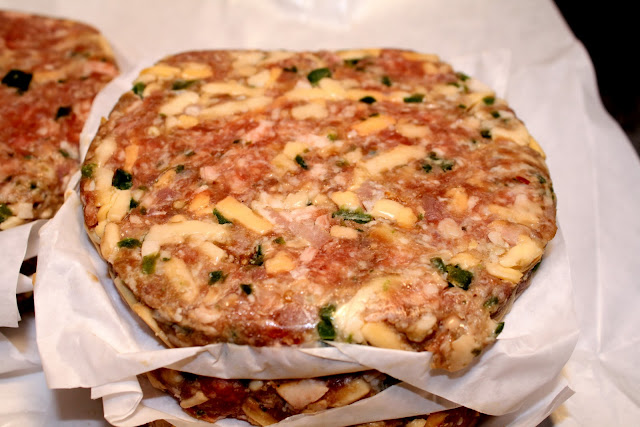 After trying the Jalapeno & Cheddar Steakhouse Burger at Burger King a few weeks back and finding it pretty average, I had an idea: take things I did not like about the burger, make some modifications, and create my own version of it. The most time-consuming thing would be making the patties, of course, but then I caught a break: Taylor's Prime Meats has burgers already stuffed with cheddar, jalapeno, and bacon. The hard part would be done for me.

I was thinking about cooking some additional bacon for the burger, but I asked the guy at the butcher shop if he thought that was necessary and he replied that there was a fair amount of bacon already in the patties, so I opted not to. 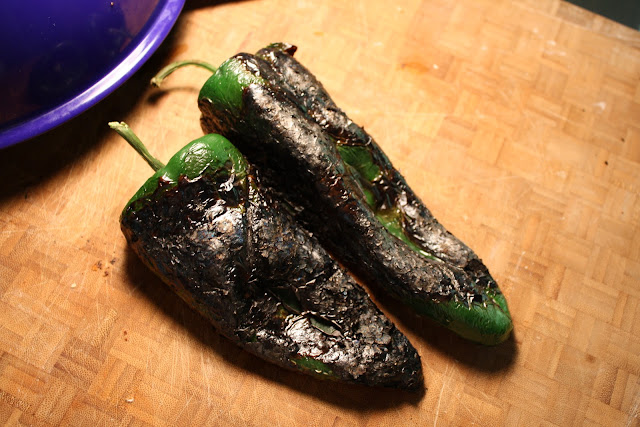 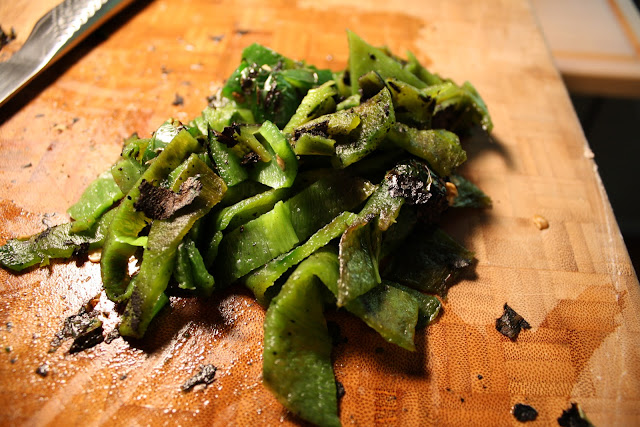 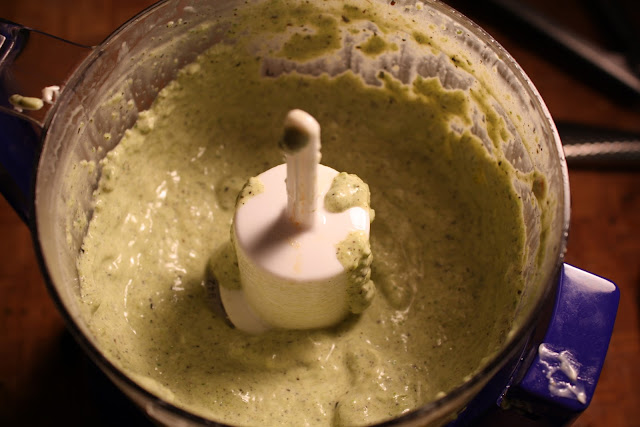 I wanted to make a sauce for the burgers, so I roasted two poblano peppers on the stove, then let them rest on a cutting board with an inverted bowl covering them. When the skins loosened after about twenty minutes, I peeled them off (well, some of the charred skin was left; no big deal) and ground the peppers in the mini prep with mayonnaise and a touch of olive oil. 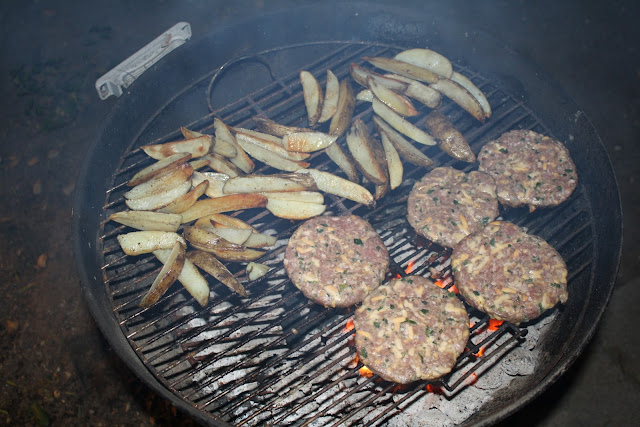 Earlier in the afternoon I had roasted wedges of potato in the oven, then let them cool down. I invited some friends over and threw the burgers on the grill. I drizzled olive oil over the potatoes and placed them on the grill as well, getting the skins slightly crisp and adding pretty grill marks. 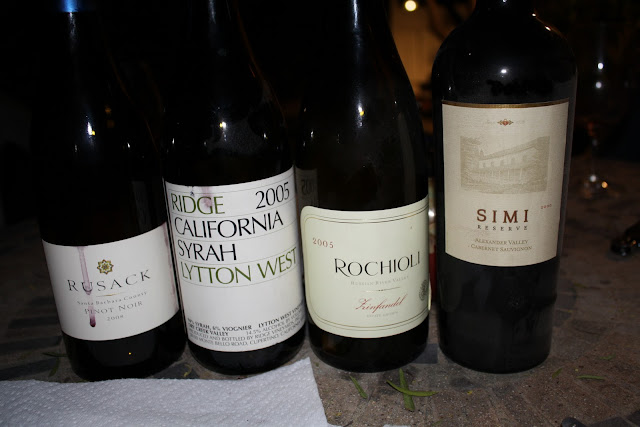 Our wines for the evening: a 2008 Rusack Pinot Noir from the Los Olivos area, an '05 Ridge Syrah from Dry Creek Valley (by Healdsburg), an '05 Rochioli Zinfandel from Russian River Valley, and a 2000 Simi Reserve Cabernet from Alexander Valley. 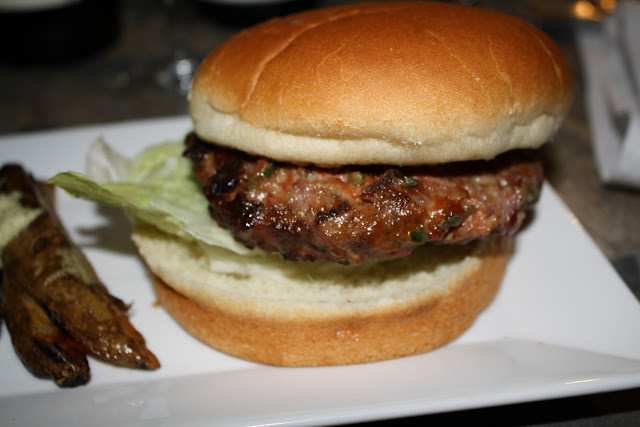 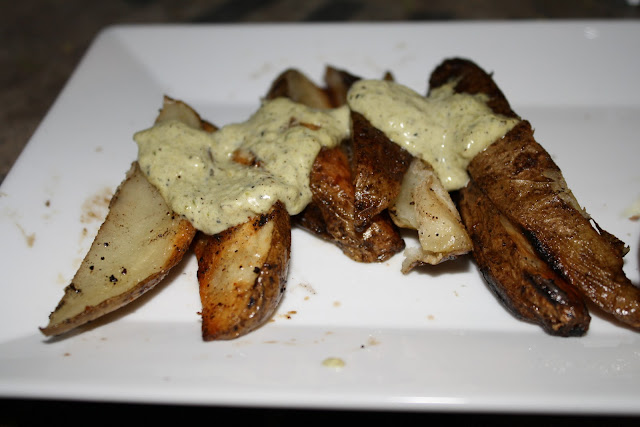 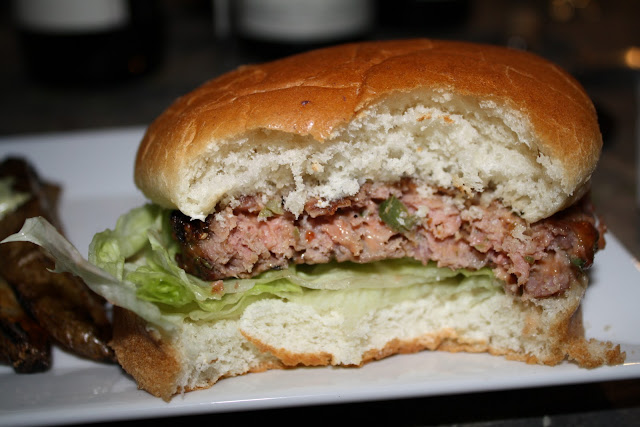 I placed my patty on a bun with some fresh lettuce and a touch of the roasted pepper aioli. It was very good, miles ahead of the Burger King burger. I immediately noticed a couple things: this burger was spicy. Unquestionably, it was assembled with freshly chopped jalapenos. No chain fast food burger would ever be made with such high quality peppers. (To say nothing of the prime ground beef.) The cheddar flavor was very subdued, though. Most of the cheese had melted out. Now, it's hard to be too upset about this because it means they used quality cheese, unlike BK's processed "cheese" that won't melt. But it definitely could have used a slice of cheese on top.

I will make these again with a piece of bacon on each, some additional cheese, and a probably purchase a higher-quality, freshly baked bun. Then I imagine it will be perfect.

pp- the first pic is the raw patty? it looks like an egg frittata or something.

Yeah, it's the raw patty with the cheese and jalapenos in it. To be honest, we got a new camera since the old one conked out - a Canon Rebel DSLR. I've never had a camera this nice so I'm getting used to it. That was one of the first pics I took with it, so I could have done a much better job representing how it actually looks.

Those poblano peppers look awesome. I’m going to try that recipe for the sauce. Thanks.