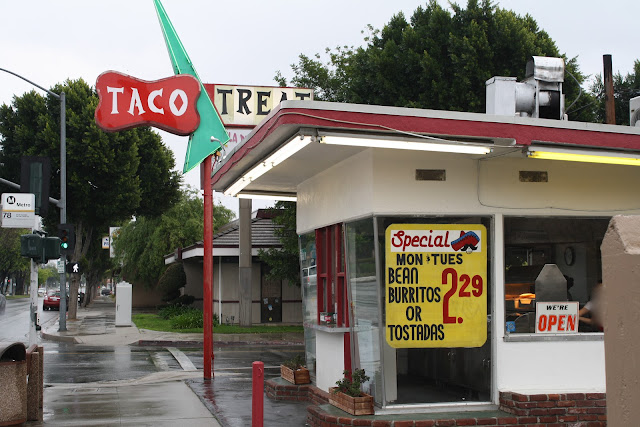 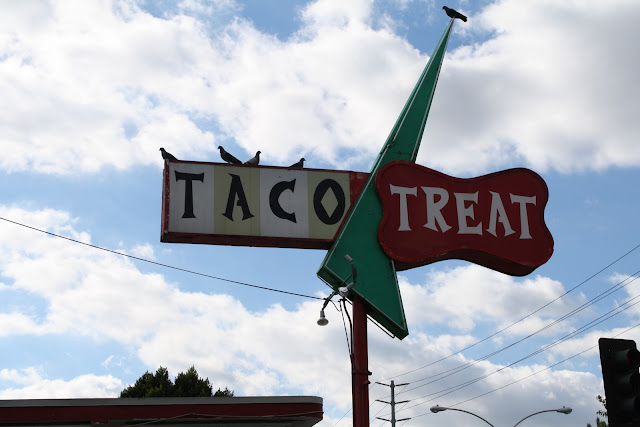 A couple weeks ago, a reader named Stephen emailed to say that he'd read something I wrote about Taco Lita and asking if I'd ever been to Taco Treat, a couple miles away from Taco Lita, down on Live Oak in area that I am never sure qualifies as Arcadia, El Monte or Temple City. (It turns out that Taco Treat is actually in Arcadia.)

I get a few emails per week from readers, but sometimes they say merely "You should go ___ ," with no explanation why nor what to get. Don't get me wrong, I love hearing from people no matter how brief, but I am less likely to try a place for the first time with no idea why I should go there or what their specialty is.

Stephen's email, however, went into nice detail about the specialty of Taco Treat, a fried burrito. I was intrigued and I made plans to visit with a friend, but we both had something come up that day and could not go. I moved Taco Treat to the back of my mind.

The other day, however, I was at my parents' house and talking to my dad about the best pizza he'd ever had (he decided it was a place on Foothill in Arcadia or Monrovia that has not existed for decades). We talked for a couple minutes about places in the area that no longer exist and places that have been around for a long time. I showed him a picture of Taco Treat and asked if he'd ever eaten there.

"Your mother loves that place," he said. "Back when she was first starting her career, she taught in El Monte and would go there. In fact, we just went there a couple months ago because she had a craving for one of their burritos."

That settled it. That afternoon, while Elizabeth and I were on one of our lazy Sunday afternoon drives, I suggested we stop by for some food. It took me a couple minutes to study the menu; when the lady behind the window realized it was my first time at Taco Treat, she informed me that she would be giving me a fried burrito for free. That was just fine by me. 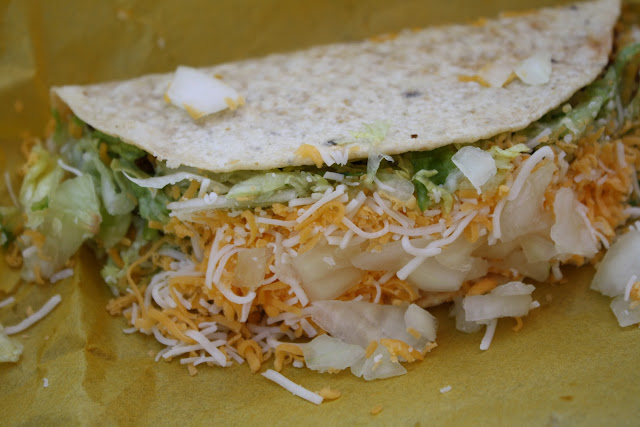 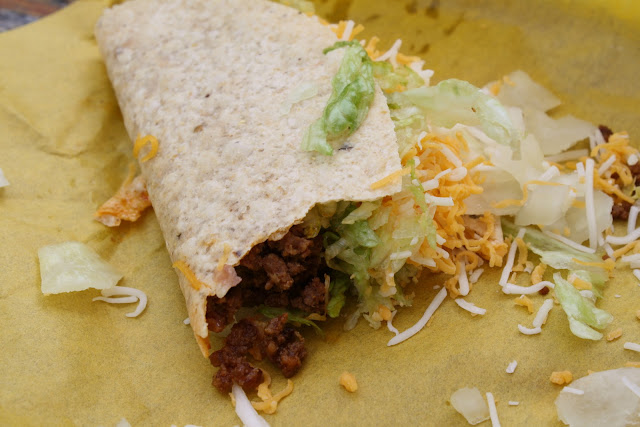 It's hard to write about the taco without comparing it to Taco Lita: both are hard shell with slightly-greasy meat and lettuce and cheese. The cheese at Taco Treat pales in comparison to the cheese at Taco Lita; I could barely taste it here. But the taco was just as tasty. I would even say the meat in this particular taco was slightly better than Taco Lita. However, Taco Lita's hot sauce clearly tips the scales; it is so good that I have to side with Taco Lita's tacos. (One of these days I will take a packet of Taco Lita's hot sauce to Taco Treat and see how that is.)

Taco Treat's tacos are $2.00 each. Up until a couple weeks ago, Taco Lita's tacos were $1.60 or so, but my dad just informed me that they (he still goes there every Friday night without fail) are $1.90 now. 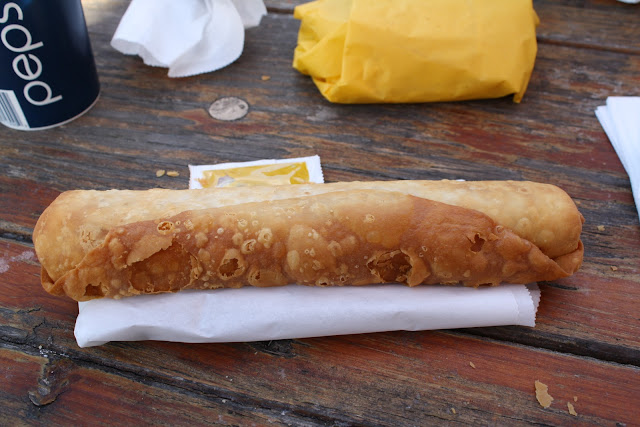 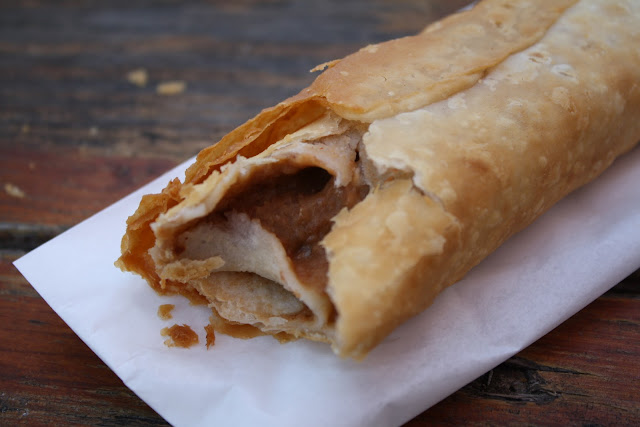 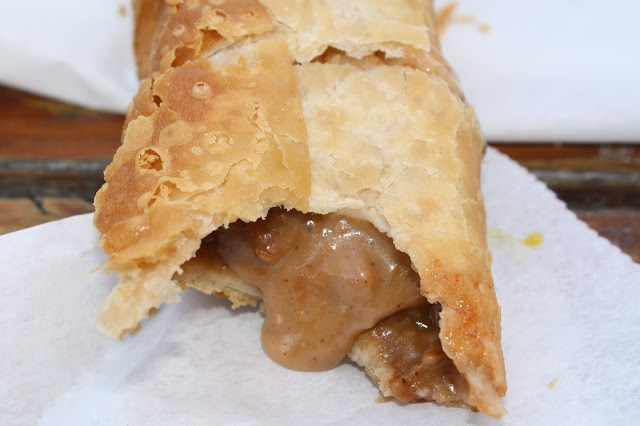 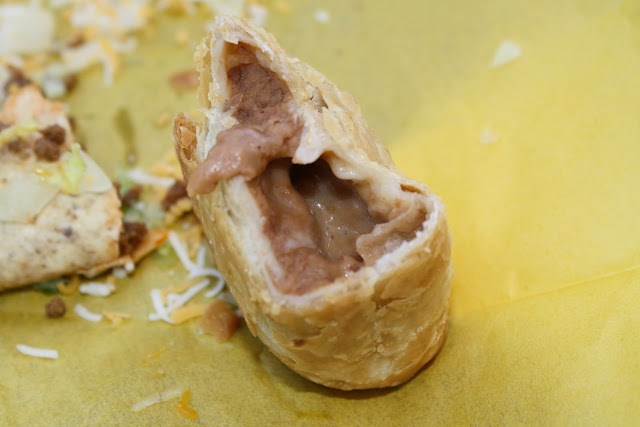 Taco Treat offers four burritos on their menu, and, as the very nice lady explained to me, all four are fried. I've never been a big fan of beans and I wasn't expecting to like this very much, but it was absolutely delicious. The melted cheese and gooey beans formed a molten-hot sludge that kept trying to ooze out of the super-crispy fried tortilla.

People throw around the term "Americanized" when describing food like this as if it is some kind of pejorative. I do not care. In my world, the "authenticity" of a cuisine always takes a backseat to the taste, and this tasted great.

"Once I started eating, I realized I was hungrier than I thought," she said.

"We can always get more food," I said. 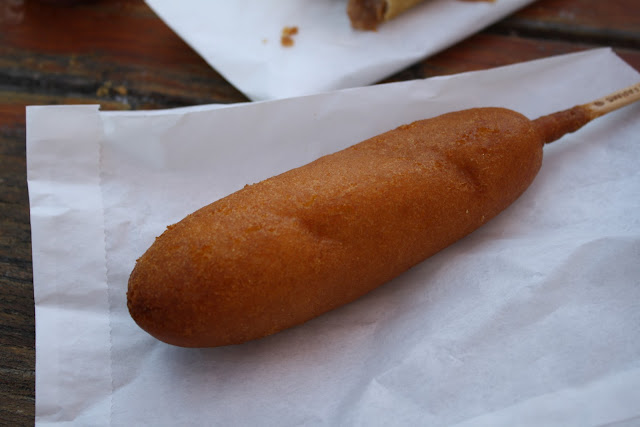 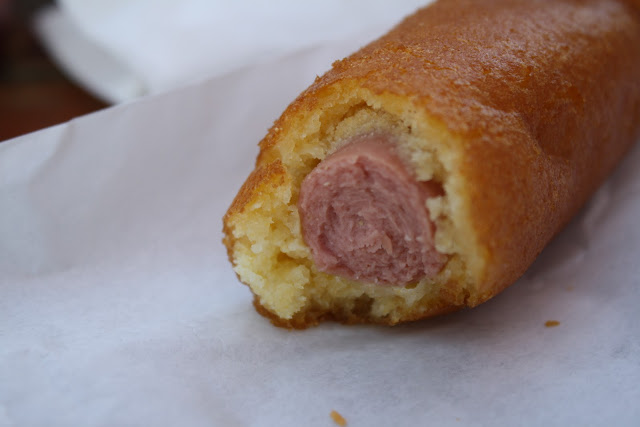 Over the weekend I saw a picture on one of my favorite blogs of chorizo corn dogs and it gave me a strong craving. I considered making my own version, but I was feeling too lazy. So I bought a corn dog at Taco Treat. It was completely delicious and completely unspectacular: it tasted like every halfway-decent corn dog I have ever had. But that's all I was craving and it hit the spot.

The lady had come outside and asked us how we liked it. I said very much. She mentioned the other fried burritos they sell, including one with ground beef and diced jalapenos. It took me less than five seconds to decide to order one. 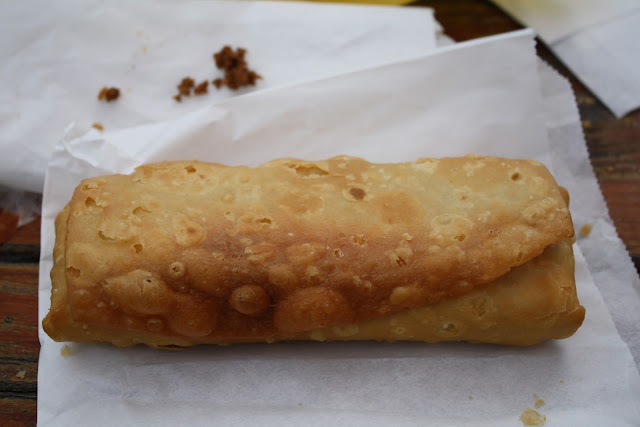 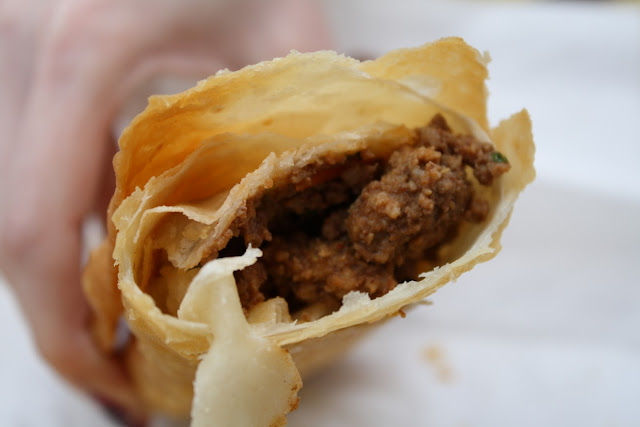 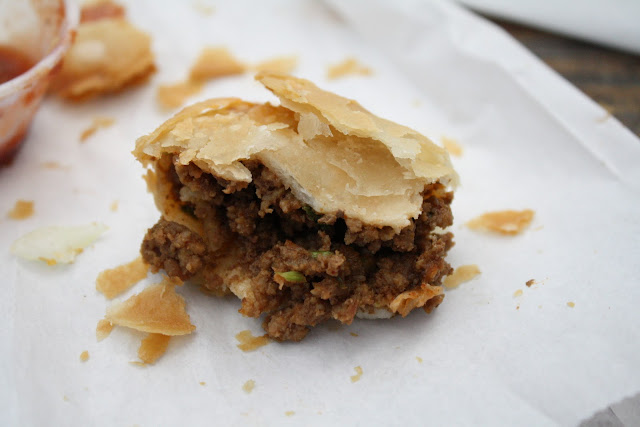 It was good, but definitely not as good as the bean and cheese variety. It needed something else, perhaps some melted cheese, and it definitely needed more jalapenos. It was not very spicy. But, it was still fried beef and tortilla, so I liked it.

I decided to get a fried burrito and take it by my parents' house as a surprise for my mom. She was thrilled when she saw it... until she bit into it. Apparently her favorite is the ground beef version; she doesn't like beans either. Oops.

So, obviously, I like Taco Treat a lot. But not as much as Taco Lita. But that's not a fair comparison; there is no way Taco Treat could overcome my history with Taco Lita. Trying to take that out of the equation - which is impossible but I will still try - I would say that I still like Taco Lita slightly more... that hot sauce is just too damn good.

But Taco Treat is still a great find, and they're even open on Sundays (which Taco Lita is not).
Posted by JustinM at 10:08 AM

If I go only by these pictures, I'm not in the mood to eat any of this...stuff!

Señor Cafe, Taco Treat is one of the three jewels of Arcadia (I grew up in Arcadia, I know whereof I speak).

My grandma loved her a Taco Treat fried bean & cheese burrito something fierce. I'm more of a Taco Lita kind of girl, having grown up within walking distance of it.

I am desperately in love with your new camera.

Cafe: I think you should stick to Euro Pane.

SuperLarge: All great places, but none as good as King Arthur's, gone these many years.

English Rose: Just imagine how cool it will be when I actually read the owner's manual and learn how to use it.

Is this the same Taco Treat that was located in South Pasadena about 45 years ago? I grew up on their all meat (deep fried) burritos. I currently live in South Orange County but would make the drive to Arcadia for a nostalgic burrito. Could I get them to ship? Please confirm.

Hi Jeff. I'm pretty sure that it is. I wasn't around 45 years ago so I can't be 100% positive, but I do know that there used to be lots of locations, and I have read that one was in South Pas.

Yes, a definite YES for South Pasadena because my wife and I would end up at Taco Treat there for a quick bite on the way home.
In fact, I believe our last date was about 35 years ago there, on our 5th anniversary. I brought a tape deck, silverware, candle opera, china plates and table cloth. Had checked it out with manager before going. They took our order, and, went around the outside from kitchen to deliver it to our table with towel over arm.
We had 50s and 60s music playing of the tapes.
It was a great night with tacos & burritos. Delicious!

That's a great story, thanks for sharing.

Would love the actual recipes of the bean and cheese burritos. And the hot sauce recipes. Does anyone really know??