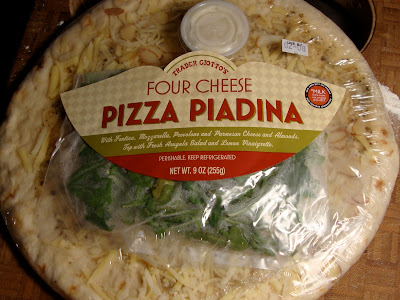 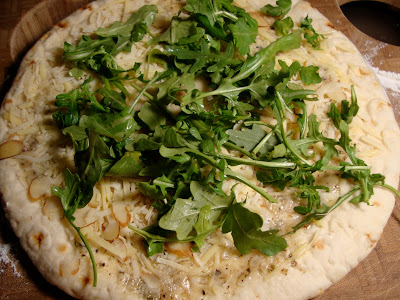 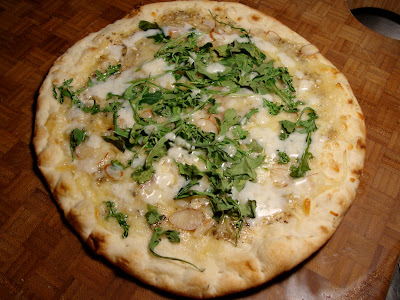 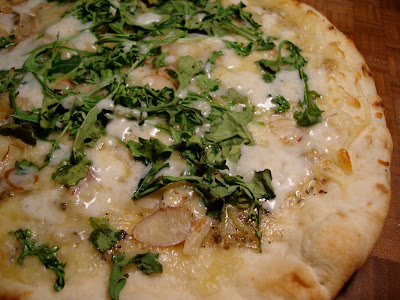 I always enjoy trying and writing about new Trader Joe's products, for three reasons: 1) most importantly, they are usually delicious, 2) my friends know I go to TJ's a lot and they usually ask me "Have you tried the new_____ at Trader Joe's?" so I like to be able to answer them, and 3) the most common search terms people use to find this blog are new fast food promotions and Trader Joe's products.

So when I saw TJ's had a new product called a Four Cheese Pizza Piadina, a thin flatbread topped with mozzarella, parmesan, fontina and provolone cheeses and slivered almonds, I had to try it. In a separate bag is fresh arugula and a small container of lemon vinaigrette.

It heated in the oven in only a few minutes, the arugula wilting slightly and the cheeses melting. I added the lemon vinaigrette after I took the piadina out and placed it on the cutting board. I have to admit I was skeptical about how it was going to taste.

I should not have been; it was really tasty. ("Delightful" is the word Elizabeth used.) The cheeses were a great combination and the arugula and lemon vinaigrette was awesome. I don't think I would have ever thought of using that on a pizza (or piadina) but I loved it.

The piadina would probably be a meal for one person, but split between two people it's more of an appetizer. So I had to make something else: 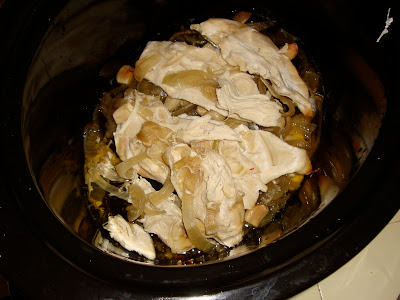 I had two things that I needed to cook: chicken breasts and pizza dough. No problem there: I had an idea. I sliced up an onion and put it in the slow cooker with the chicken and at least 30 cloves of garlic. 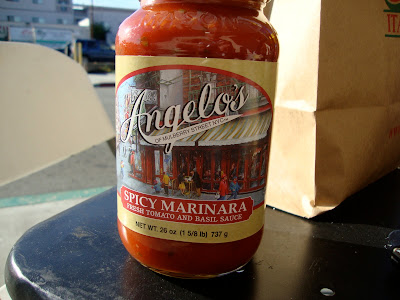 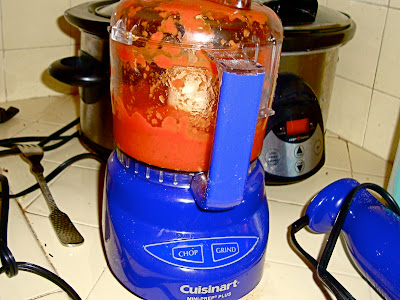 Remember the Angelo's Spicy Marinara sauce we got at Claro's? It's delicious but too thick for pizza sauce, in my opinion. But my parents gave me a Cuisinart mini processor for Christmas, so I poured the sauce in there and grinded it up to my liking. 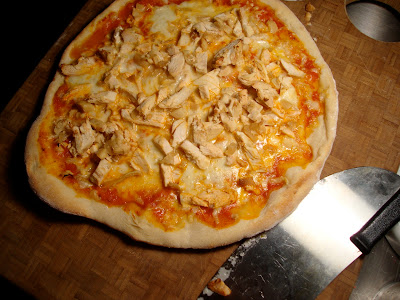 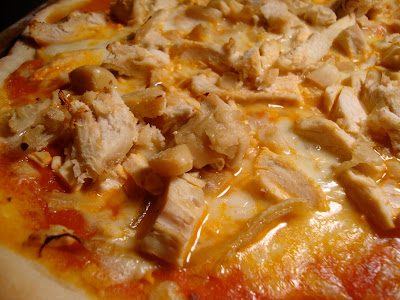 I topped the pizza dough with the sauce and chicken and as many of the cloves of roasted garlic as I could pick out. It was great, the sweet, mellow taste of the roasted garlic mixing perfectly with the spiciness of the tomato sauce. As I was eating the pizza I had a couple ideas to improve it - some fresh basil would have been nice but I was all out - but considering this was done on the spur of the moment, I was very pleased.
Posted by JustinM at 10:58 AM

According to instruction on the pizza piadina, you are supposed to bake the pizza first without the arugula, and then once it is done, toss the fresh arugula with dressing and top the pizza. This leads to fresh vegis on top of the melted cheese pizza, not wilted ones.

Thank you. I read that myself. I prefer all my greens, other than basil, wilted on my pizzas.