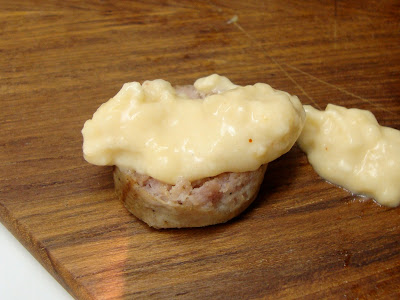 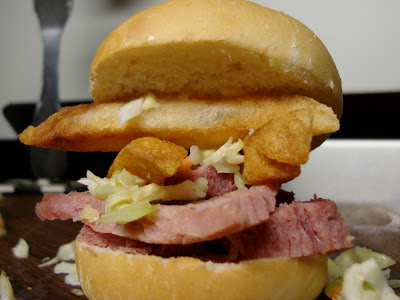 Originally I had planned to make these during the game today, but last night I was making dinner for my parents and Elizabeth and I decided 'I'll make these for dinner and let's see what we like more, and then bet heavily on the game according to which dish wins.' Well, okay, maybe not that last part, but it still sounded like a good idea for dinner.
For the Green Bay side of things, I boiled bratwursts in beer and kissed them on the grill for a couple minutes to get some grill marks and bronze them on the outside. I made a fondue of Wisconsin White Cheddar (with Miller Genuine Draft) and dunked several pieces of bratwurst in it.

For Pittsburgh, I went with a slider homage to Primanti Bros., a chain of Pittsburgh sandwich shops where all sandwiches are served with cole slaw, tomatoes and fries piled into the sandwich with the meat. I cooked a Harris Ranch corned beef in the slow cooker for several hours and piled into onto slider buns with the other ingredients.

"Its not half-bad," Elizabeth said of the sandwich. I agreed. Although the corned beef was quite salty, the sliders were still pretty tasty.

But all four of us much preferred the bratwursts and beer cheese. Will that mean anything for the big game? We'll see.

Going to Primanti Brothers is on my bucket list. Love that you paid homage to the Steelers that way!

Fritos: I sent a pic to my friend, who is from Pittsburgh, and he said it didn't look authentic because it looked like it might NOT make him sick. Apparently he doesn't think much of the place.

Nosh: Damn I knew I should have wagered on them. Next year I'll do the same thing and bet heavily. (Watch it be Jacksonville vs. Arizona or something like that. What the hell would I make?)

I have to admit I was not totally sold on the sliders with fries. But after trying them I found they were pretty darn tasty. (The beef was a bit salty though)