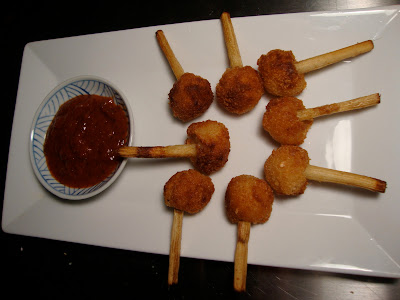 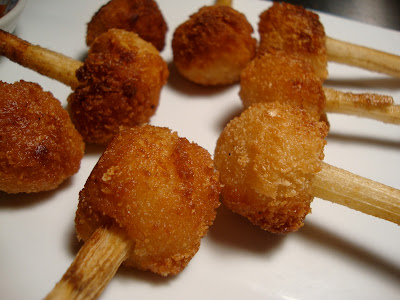 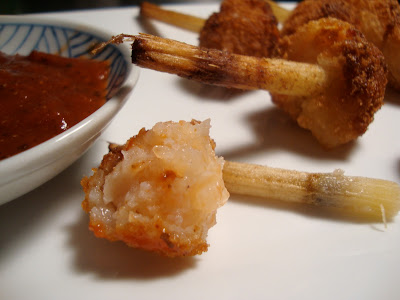 I needed an afternoon snack so I turned to a Fresh & Easy appetizer that had been in my freezer for weeks: sugar cane shrimp balls. I had never heard of such a thing before but they'd been half-price when I picked them up (maybe $1.50) so I figured they were worth a try. The instructions said to cook them in the oven or (bizarrely) microwave them. Of course I chose to pan fry them.

After less than five minutes of cooking I removed the shrimp skewers and plated them with a small dish of cilantro and lime cocktail sauce. They were tasty, but I needed only a couple bites to realize it was more white fish than shrimp. (I looked at the ingredients, which confirmed that.) These are certainly more of a snack than a meal; each one took a bite or two to finish. I'm not going to buy them again, though, unless I see them on sale again at half price. 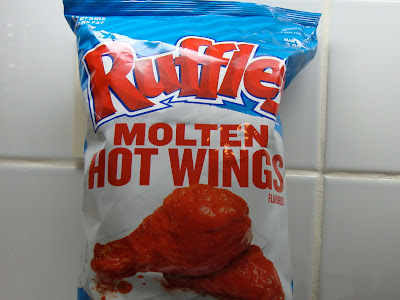 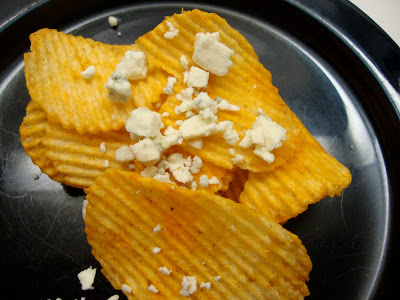 When I read that Ruffles was coming out with a limited-time-only flavor called "Molten Hot Wings," trying to taste like Buffalo wings, I knew I had to try them. I have always liked Ruffles - although the older I get, the less their extreme saltiness appeals to me; nor does the way only a handful of chips seems to coat my hands in oil - and I definitely love Buffalo wings. These chips were pretty much exactly what I was expecting: very salty, kind of spicy, not really tasting like Buffalo wings but still pretty tasty. Am I glad I ate them? Sure. Will I ever get them again? Nah. 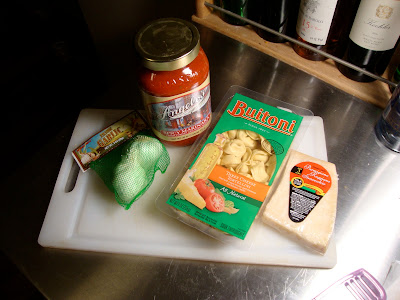 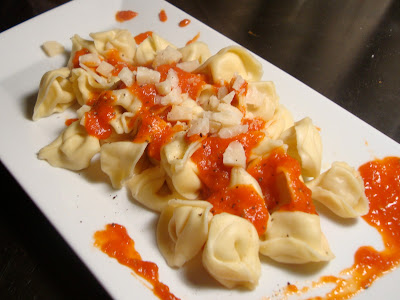 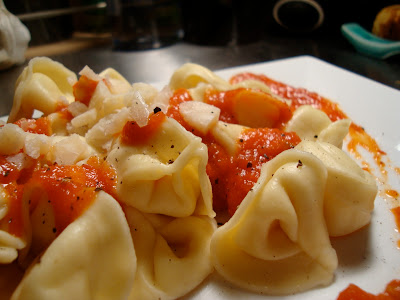 Elizabeth said she would make me dinner. My arm still aches from the incident where I slipped on the stairs fought off a gang of murderous Mississippi Riverboat pirates, so that sounded great. Last weekend at Claro's she had picked out a jar of spicy marinara sauce from Angelo's in New York. After she cooked the pasta I added several spoonfuls of it to my plate, with pieces of crumbled Parmesan and some fresh cracked pepper.

This was the best pasta meal I have had in as long as I can remember. Granted, I am not a huge pasta fan and I rarely eat it, but this was still delicious. 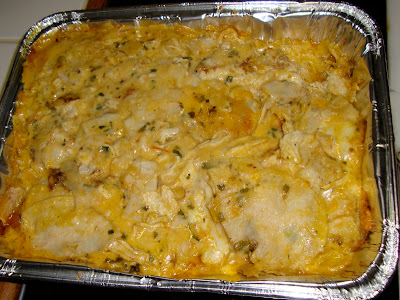 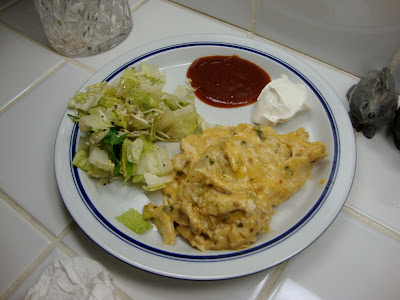 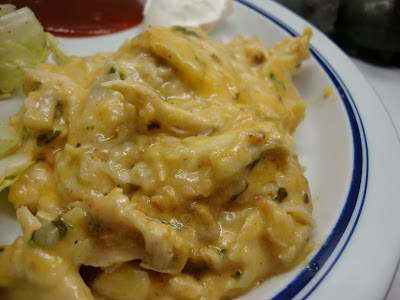 I was over at my parents' house and my mom had been at a seminar; she had leftover food from the caterers - salad and chicken enchiladas. I've never been a huge fan of chicken enchiladas, associating them with stale tortillas and a deluge of sweet red sauce. These had no red sauce, plenty of juicy chicken, and were unquestionably the best I have ever had. I had made myself a plate with some sour cream and Taco Lita hot sauce, thinking they would be good complements if the food was bad, but I barely used either of them. 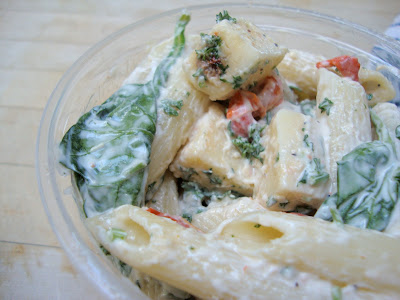 For the second time in my life - and also the second time in two years - I did not care which team won the Super Bowl. (I am not a fan nor a hater of either team. I liked the idea of Aaron Rodgers having just as many Super Bowl rings as Brett Favre; I liked the idea of Ben Roethlisberger having the same number of rings as Tom Brady, without the benefit of illegal videotapes of the opponent.)

Originally I'd planned to cook corned beef and bratwurst for the game, but I made that the night before. So I picked up some food at Whole Foods, starting with a favorite of mine, the smoked mozzarella pasta salad. This was great as always, and I got more smoked mozzarella than I ever have before. 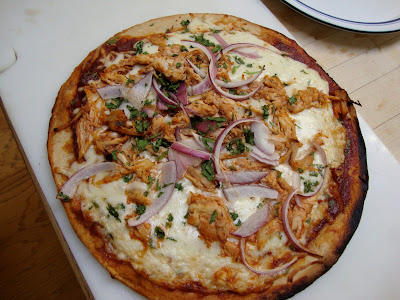 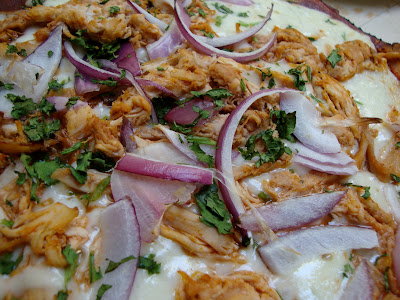 I got a barbecue chicken pizza that was good until I bit into a chicken bone on my first piece. That ruined it for me and I did not have more than one slice. Damn. 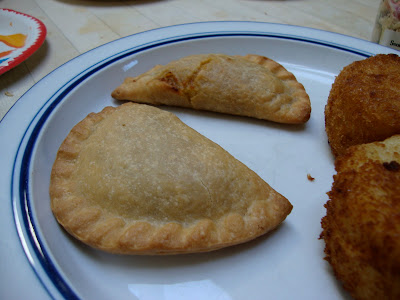 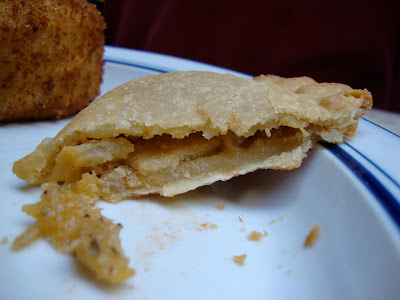 Chicken empanadas were a disappointment - the flavors were quite bland. I only ate half of one. 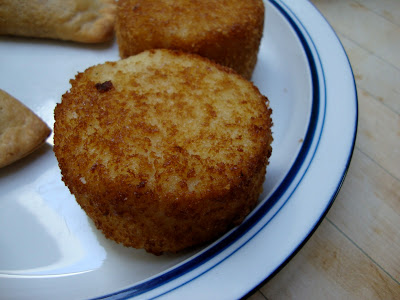 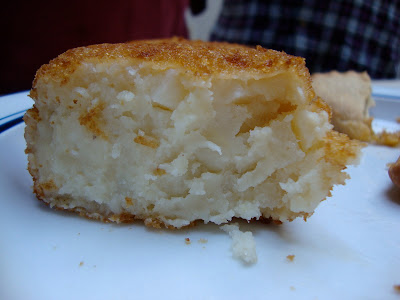 I got two "Horseradish Potato Croquettes." I'd never tried them before but I really like both those flavors so I figured why not? Unfortunately, the only flavor I could taste was potato; there was no horseradish in it. Oh well. The Whole Foods snacks were a disappointment overall, but the other people with whom I was watching the game seemed to like them.
I also ate a couple other things over the weekend, but they deserve their own posts, so I'll get to them later in the week.
Posted by JustinM at 11:17 AM

Those were the best chicken enchiladas I have ever had as well! And while, yes, I did enjoy the Whole Foods snacks, they weren't anything special. I like the empanadas from Von's better.

aaron rodgers not brooks, pp. aaron brooks was a middling qb earlier this decade who sucked with the saints and raiders (of course).

You know what's even funnier? I was thinking of Aaron Brooks the basketball player. I should never write these things at midnight... I will change that.

BTW I would LOVE it if Aaron Brooks (the football player) had just as many rings as Brett Favre.

A Ruffles comment- I too love them but hate the greaseyness and the excessive salt. So try the reduced fat ones! I actually prefer them to the regular kind, and I'm not a "reduced-fat" sort of person. But they're great! Way less salt and grease but they still taste great. Try it!!! Now!!!

The chicken enchiladas and salads were from The Spot in Pasadena. They catered our conference, and the food was excellent.

For my entire life I've complained about the excessive saltiness of Ruffles potato chips yet no one would ever agree with me, until now. Thank you!

Hmmm... sounds like you SHOULD have made lavender ricotta cheese :-)
I really like your Fresh and Easy (i.e Stale and Difficult) shrimp score. My sister in law, who is Vietnamese, has made these before and they are delish!