SausageFest, & A Brief History of the Blog 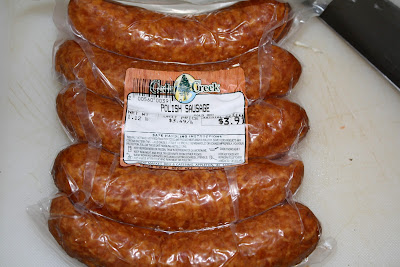 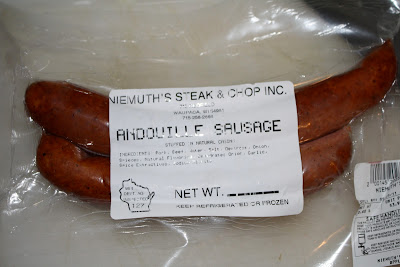 Whenever I'm asked how I got into blogging, I give one of two answers: if it's not appropriate (or I just don't feel like giving a long answer) I simply say "Aw, just something I write for my friends to read."

But if I want to be more specific, the whole story is this: years ago, when I used to travel much more frequently than I do now, I realized that every once in a while when I was showing pictures to a friend or family member, I would come across a random shot of food, and that would inevitably elicit more interest than anything else. So I started taking pictures of any food on vacation that looked interesting.

At first I thought people liked food pictures simply because everyone eats and thus eating is a universal interest. But I came to realize it's not just that, it's that food is one of the only unique things that you can show from vacation pictures.

When you return from a vacation in New York City, do you think people want to see the 83 photos you took of the Statue of Liberty, an image they have probably seen 10,000 times in their life? No. Do you think they want to see pictures of how much partying you did in Las Vegas, as if you were the first person to ever do such a thing? They do not.

But the Ethiopian restaurant you stumbled into on the Upper East Side because the barbecue restaurant in the guide book had closed down, where the injera bread bounced off the table like a superball and you drank five different kinds of Ethiopian beer that were all delicious? People actually want to see photos of that. 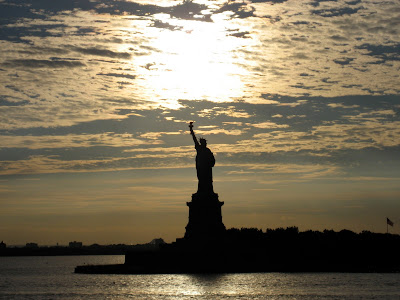 This is the picture I took from the Staten Island Ferry on my way over to see a Minor League Baseball game. Everybody said how pretty it was; nobody had any questions. 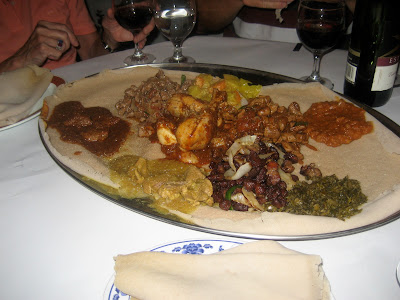 This is the dinner I had at Ethiopian Restaurant, which, in addition to having a wonderfully expository name, was one of the top 10 meals of my life. Everybody has questions about photos like this.

"You mean the bread is the plate and the utensils?" they ask.

"Indeed," you answer. "Would you like to see pictures of the Empire State Building?"

By the time - 6 years ago - that I went to Memphis in May with my friends Hatcher and Min for the World Championship Barbecue Cooking Contest, I was taking pictures of everything I ate on vacation. And people couldn't seem to get enough. I would email pictures of barbecue to ten or twelve friends and there would be a long email chain with follow-up questions. My buddies Les and Phil told me I should put the pictures online in a blog. So I did, a blog about barbecue and baseball. Phil left a comment on one of the posts that inspired this second, much more popular blog. This is all his doing. Well, sort of.

Years later, I was watching Top Gear and eating cereal one morning when I received a text from Phil that he was in Wisconsin, eating bacon "that must have been made by Jesus himself." He asked if I wanted him to pick up some bratwurst for me.

You can probably guess my response. I once ate lunch at a sports bar across the street from the legendary Lambeau Field in Green Bay. I had fried cheese curds, bratwurst and cottage fries. I'm not sure which meal of my lifetime contained the most calories, but that had to be a strong contender. (A guy a couple seats down at the bar ordered a pizza; the bartender asked if he wanted the base to be pizza sauce or ranch dressing, the first and only time I have ever heard that asked.) And it was all tasty. University of Wisconsin football fans may be obnoxious and the propensity for grown men to wear wedges of cheese on their heads is simply ridiculous, but damn they know how to make good food there.

Phil brought me back a package of Polish sausage and one of andouille sausage. 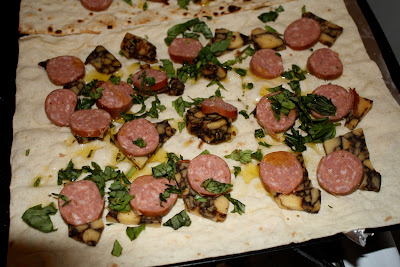 I invited some friends over for dinner. To start, I sliced up the andouille sausage and put it on lavash with some Trader Joe's cheese with Irish porter, fresh basil, and olive oil. 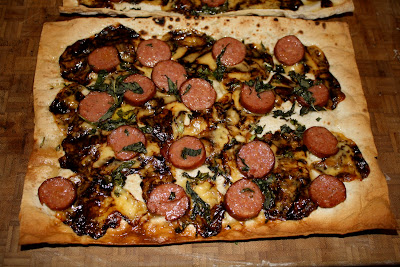 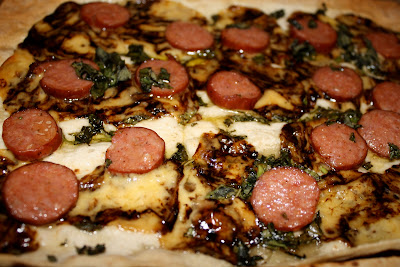 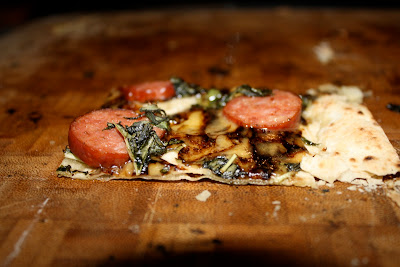 After less than ten minutes in the oven, the cheese melted into a beautiful mess and the lavash crisped up enough to be eaten as a flatbread.

"This is unbelievable," Murph said.

"Just wait for the main event," I said.

"This isn't the main meal?" 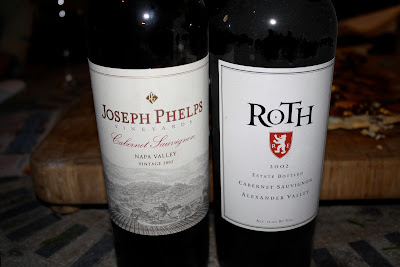 Our wines for the evening. 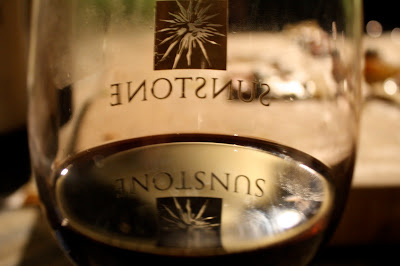 I just like this picture because I love Sunstone. 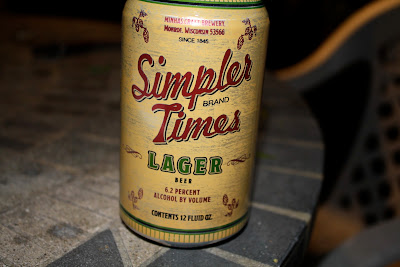 Our beer for the evening, from Monroe, Wisconsin. 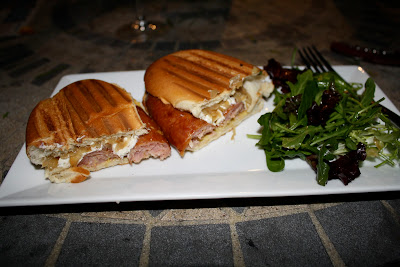 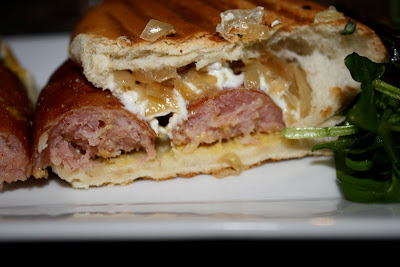 I had been worried that it might rain, so instead of cooking the sausage on the grill and eating it plain, I came up with another plan: panini. The day before, I had thought for quite a while about what kind of panini to make with Polish sausage. I considered goat cheese, caramelized onions and an arugula salad. I did a Google search and found nothing like that.

"Maybe I've strayed too far from the herd on this one," I texted Tracie.

"No you have NOT" she replied. That was enough for me to give it a try.

I decided to serve the arugula salad on the side instead of in the sandwich, though; I thought it might get lost in the panini. So I tossed some arugula and greens with olive oil and lemon juice. On a soft bolillo I added a butterflied Polish sausage, caramelized onions, goat cheese and garlic-mustard aioli. (Well, Murph's panini didn't get any of that; he hates all condiments.)

They were outstanding. We all ate every bite. Except Murph.

"This is so good but I can't even finish it," he said. 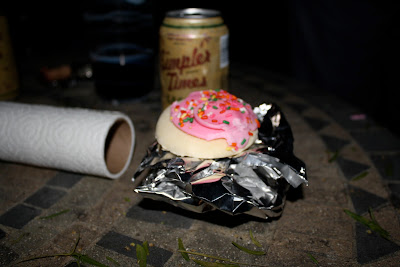 So I wrapped up half his sandwich and gave him a sugar cookie.

All in all, it was a wonderful dinner. Thank you for the sausage, Phil.
Posted by JustinM at 11:16 AM

Last night when it became known that the sausage was in play, we (the usuals) actually sat around and discussed how you might prepare these tasty treats... As is the norm, you sir went above and beyond! Call it odd, but some bizarre part of me actually looked at the sausages as my children. And as any good parent should do when considering whom to give thier kids to (no need to go into the reasoning behind why someone would give thier kids away... let's just assume it's a valid reason) you want to make sure they go to a good home... Not that you would've ever done it, but I would have cried not-insignificant tears if they would have been cooked in the micro, stuffed in a piece of Wonder Bread, and topped with a slice of Kraft American Cheese.
Anyway, all I can say you're very welcome... thanks for the great read!!!

God bless phil (for this blog) and your brother (for the action shots!)

Yep, food is much more interesting, and tasty, then fotos of the statue of liberty! Unless it's a chocolate statue!

I've had an Ethiopian meal like yours pictured. Good!

Super: You are my guru on all things wiener.

Anon 1: Next time if you could snag me an entire moose, I already have some good ideas.

Anon 2: I hardly ever see my brother anymore and he is the only one whom I will let take action shots. Hopefully we will remedy that soon.

The lavash and panini dishes were both inspired and delicious!!!
Thank you Phil for providing your wonderful children, uh, sausages.
By the way, that really is a wonderful picture of Ms. Liberty.

You may have a copy for your naked walls.

Great story, Justin. I am jealous I didn't get the invite to your sausage fest, and, yeah, I am all for adding arugula to anything. It's the best green ever!

Anna you always have a place at my SausageFest. But I don't know if it was good enough to justify you flying down here.

it looks like you love to cook. That's great. I like sausages, but only in hotels, as I don't think that I can cook any thing at home. Also my schedule do not permit me to do so. Nice sharing dear.