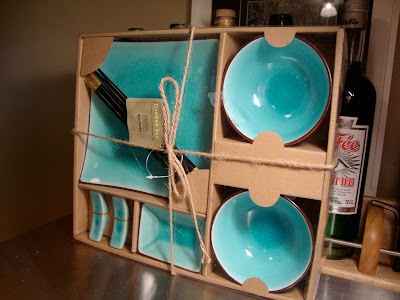 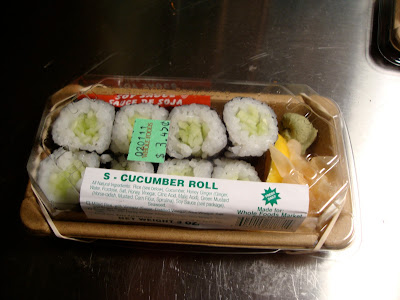 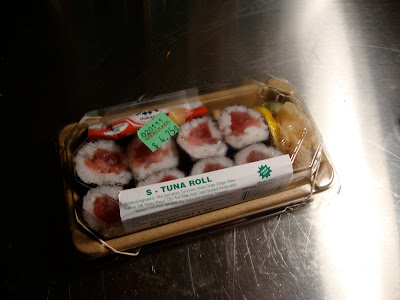 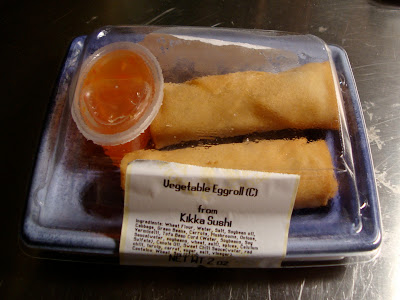 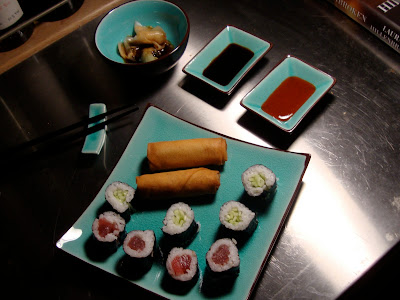 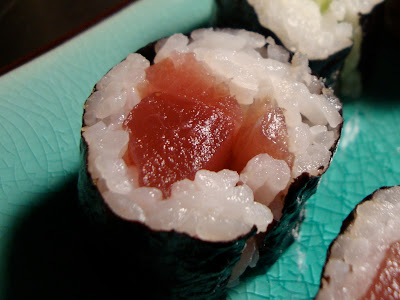 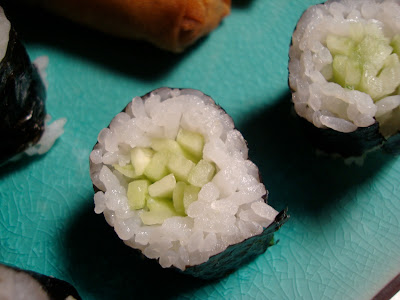 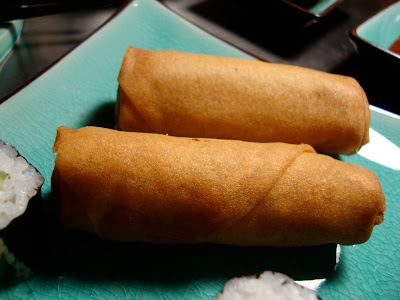 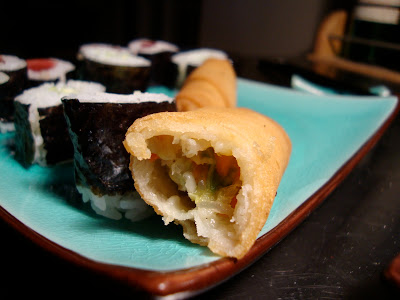 I had a Christmas present all picked out for Elizabeth but, as often happens in these matters, it was delayed in transit and would not arrive until after she'd left for New York on Christmas Eve. But I wanted her to have something to open before she left. After considering and discarding a certain idea, I was at Cost Plus and saw an attractive sushi set, containing plates, bowls, sauce dishes, chopsticks and chopstick rests. We don't eat sushi as much as we used to (no particular reason why) but every once in a while we both get a strong craving for it. I thought it would be nice to have this set.
A couple nights ago we were in one of those sushi moods so we went to Whole Foods. Their sushi isn't anything spectacular, but on a busy day it is constantly being made by the chefs, so it's fresh, and we can always get a couple containers of sushi and some appetizers for much less money and time than we would spend at out usual sushi restaurants.
We always seem to get a container of spicy tuna rolls and cucumber rolls. Sometimes we get a shrimp tempura roll, sometimes the shrimp inari. We always seem to get some spring rolls and every once in a while they have a package of gyoza that calls out to us. On this occasion the selection had been pretty well picked over, so we kept it small: tuna and cucumber rolls and two packages of spring rolls.
I heat the oven as high as it will go and then put the spring rolls in. It only takes about five minutes before they start sweating oil and crisping up a little. I placed them on the plates, dividing up the two kinds of sushi and filling the sauce dishes with soy sauce in one and Tabasco Sweet & Spicy sauce in the other. We did not have any soup this evening so I put some soy sauce in one of the bowls and added ginger and a healthy dose of wasabi. I like my soy sauce pretty spicy; this bowl would be just for me.
Both of the rolls were good, although the tuna roll definitely would have been better if it was spicier. As usually happens, I wished I'd gotten more egg rolls. But it was a nice, simple dinner, and we got to use the sushi set for the first time.
Posted by JustinM at 10:26 AM

With a nice set like that you might want to consider rolling your own. I tried it once a long time ago and it was a lot of fun and delicious.

Slankets are good. And that sushi set is really pretty. And you've made me hungry. Again.

Nice presentation sushi! They look so much better on the plate.

Nice - are you guys the maker of this set? We love it; so pretty and an amazing deal at Cost Plus.