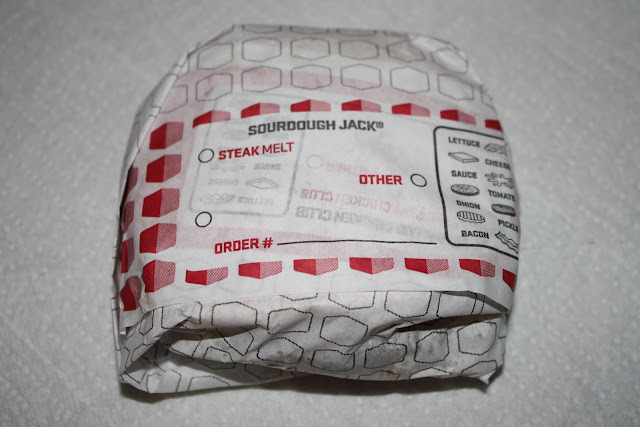 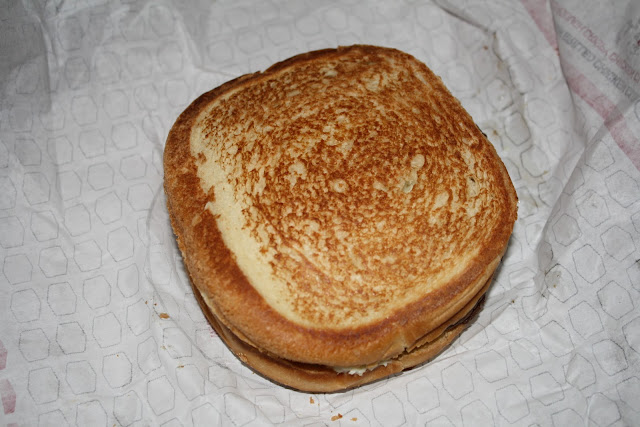 In almost 800 posts, I've only written about Jack in the Box's burgers once, a sirloin steak & Swiss burger I had back in August. There is a reason for that: I've never liked their burgers. I've had them a few times over the last couple of decades, and I can't remember one ever being any good.

But recently Jack decided to upgrade its burgers, promising "improved taste, texture and juiciness." So I figured I would give them one more try. I went to a Jack in the Box with a big banner advertising "Better Burgers" and featuring a picture of three burgers. I selected the one that seemed the least-offensive: the Sourdough Jack. It looked fine when I unwrapped it. 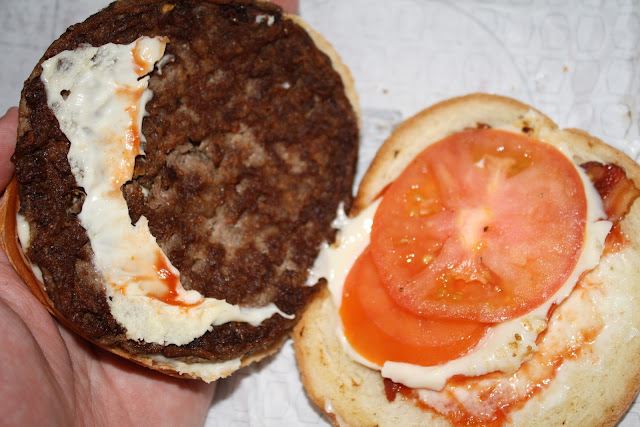 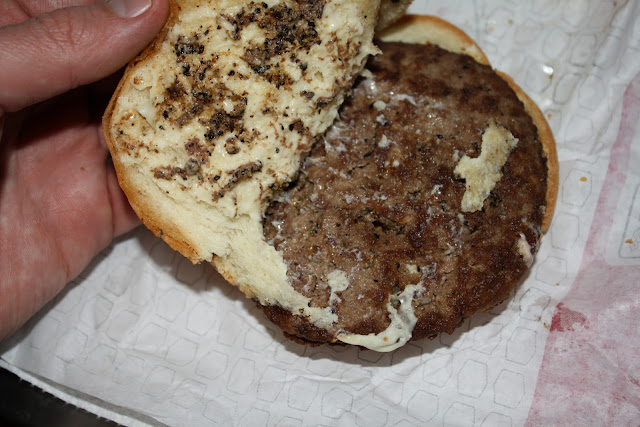 It did not look good when I pulled off the bun, however. The meat looked like the same gray, freezer-burned stuff that is as much a part of Jack in the Box as Jack the spokesperson. 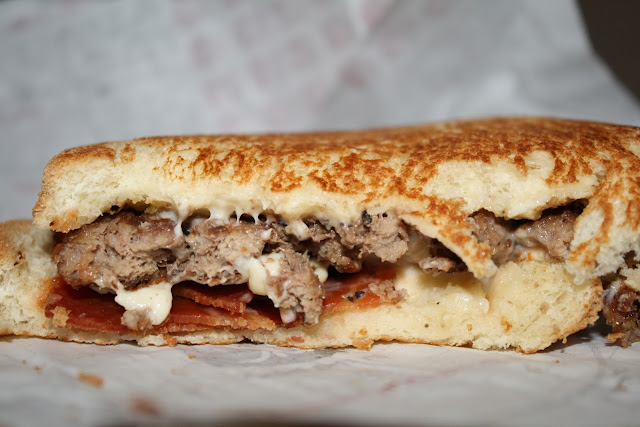 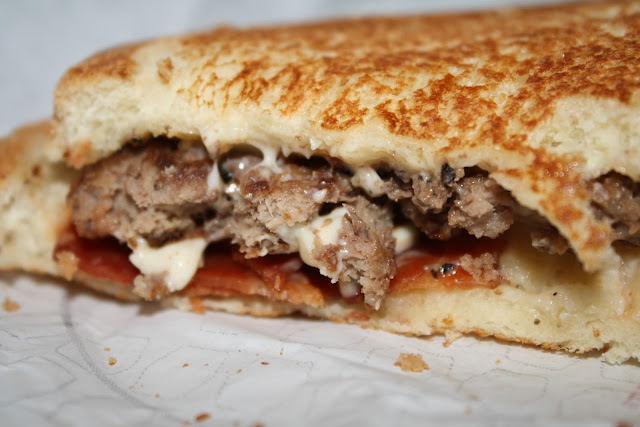 Still, I tried it. The new burgers are supposed to be seasoned as they cook. At least that's what the banner proclaimed. But after one bite I knew exactly what that means: they just dump a lot of salt on the patties. It was the saltiest burger I think I have ever eaten. I could not eat more than a couple of bites.

I don't mind Jack in the Box (well, as long as they keep serving those egg rolls), but I've never liked their burgers. And now that I've tried their "new" burgers, I can assure you that my feelings have not changed one bit.
Posted by JustinM at 10:00 AM

I hope you asked for your money back.

Sorry for your loss (out of your wallet). That looked terrible.

I'm with you on the burgers. My coworkers and I go there often 'cause it's convenient, but I haven't found a way to make the burgers worth eating. I tried them without the terrible and excessively-glopped-on mayo, still bad. Thought maybe it was the lettuce and tomato, had that taken off too, and added catsup, less bad but still not good.
I tried their chicken thing, a little better, esp if I had em hold the cheese, but still not very good.
But someone favorably reviewed their all-day breakfast (the $3 one with pancakes, eggs, hashbrowns, and bacon) and I tried that. It was pretty good, and the eggs and pancakes were way better than the McDonald's eggs and pancakes. McDonald's english muffin, served free of Egg Mc as part of their, was really good though) I was amazed, esp given how bad Jack's meat items are.
Jalapeno poppers are OK too but kind of overcooked and you have to ask for ranch dressing if you want it with it.
ML in California

ahhhh gross! good to know it still blows. I always wondered about the sourdough jacks, never got the urge to order one but it seems like everyone but me was getting them. I will stick to their curly fries, thank you.

Matt: I didn't unwrap it until I got home so I couldn't do that. Should I write Jack and tell them how horrible it was?

Rob: Actually, Elizabeth paid for that one, so it's her loss.

ML: Thanks for all the info. I like the Jack's Spicy Chicken without cheese, though it's not great. I definitely liked the Outlaw Chicken both times I tried it. But I've always thought their burgers were bad. Now they're bad AND really salty.

The only fast food breakfast I ever eat is a sausage biscuit. I don't dislike poppers but I've never had them from Jack and don't think I ever will.

Banana: I like curly fries when they are simply salted, but I hate seasoned curly fries, ergo Jack's ad Arby's are two of my absolute least fave fast food fries. Actually, now that Burger King has revamped theirs, Jack and Arby's are my two least fave.

I would definitely let them know how bad it was.