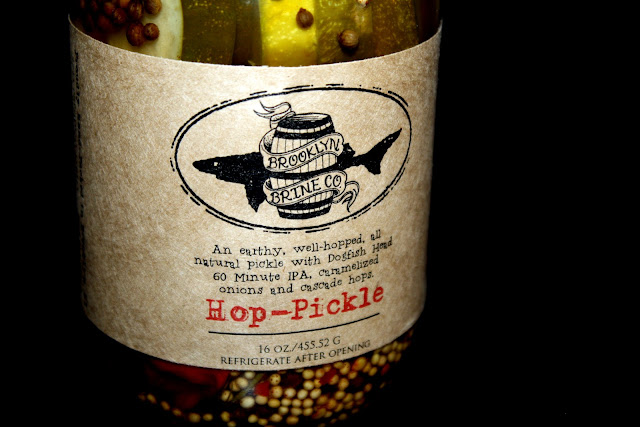 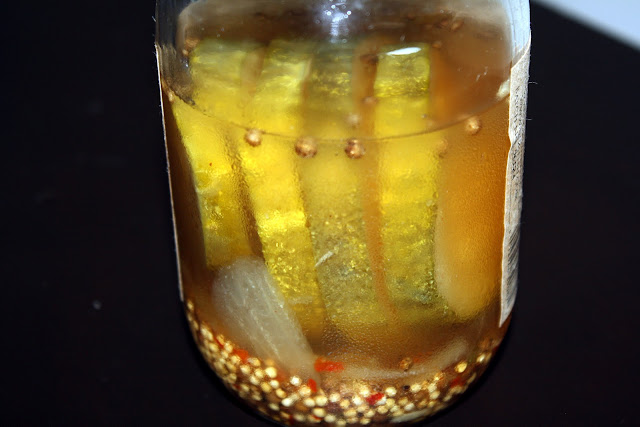 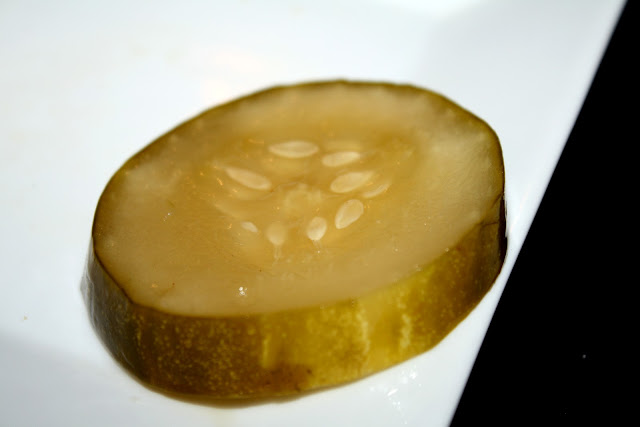 I've written of the fact that Brooklyn loves its artisanal foods. Sometimes I see products that I think get a little too carried away/full of themselves, but sometimes I see stuff that looks damn good.

Brooklyn Brine Company recently teamed up with Dogfish Head brewery to create the Hop-Pickle: The former's pickles made with caramelized onions, Cascade hops, and the latter's 60 Minute IPA.

I don't need much more of a reason than that to make sliders, do I?

But first I had to try a bite of the pickle. The word intense is overused (probably by me, too) but it applies here: these pickles were like none I've ever tried. Hoppy, spicy, crispy... I don't think I could even eat a whole slice by itself. But I looked forward to trying them on the sliders. (I gave Elizabeth a bite without telling her what the pickles were. Her face scrunched up and she exclaimed "Wow!")

It was a really humid day so I didn't feel like walking all the way to my favorite butcher shop to pick up slider patties; I just bought them at the local market. 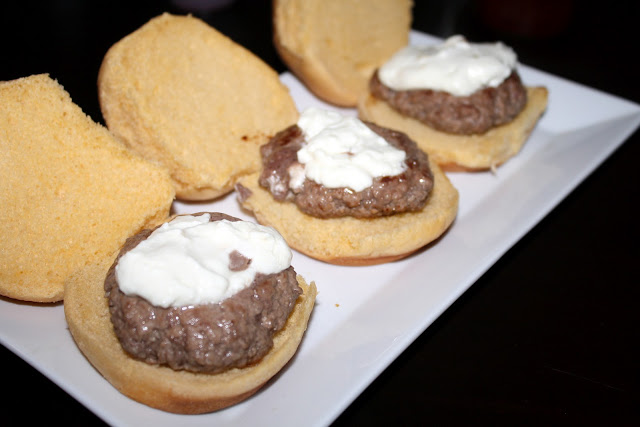 I spent twenty minutes the day before scrubbing and cleaning the indoor grill, so I didn't fell like messing it up 24 hours later. I decided to cook the slider patties in the Greenpan. Sprinkled with salt and pepper, nothing more, they cooked in less than three minutes per side. For the last two minutes of the cooking, I placed a glob of goat cheese on each patty. 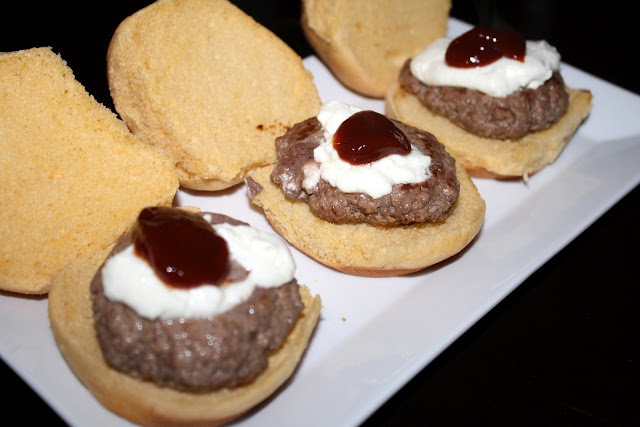 I decided to use ketchup and take advantage of its natural sweetness as a foil to the flavorful pickles. But I didn't want to use my beloved Sir Kensington's - the flavors of that ketchup are so complex and delicious that they would probably distract from the Hop-Pickles, which were the guest of honor in these sliders. So I went with Heinz's ketchup with balsamic vinegar. 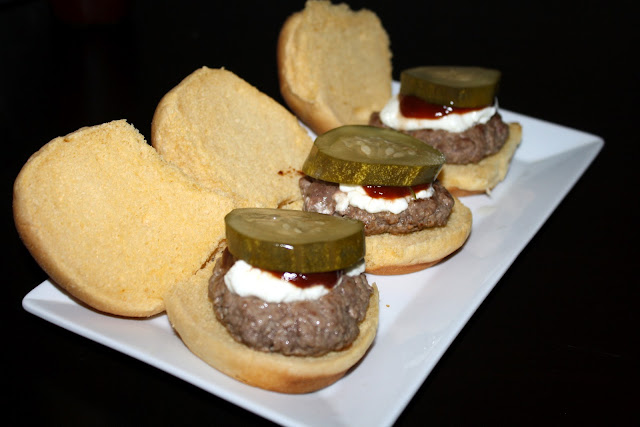 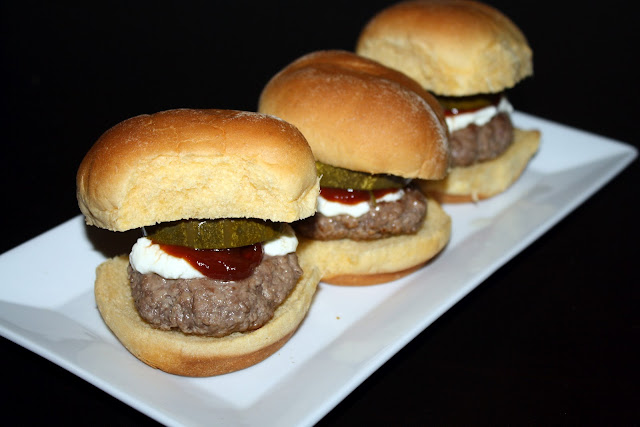 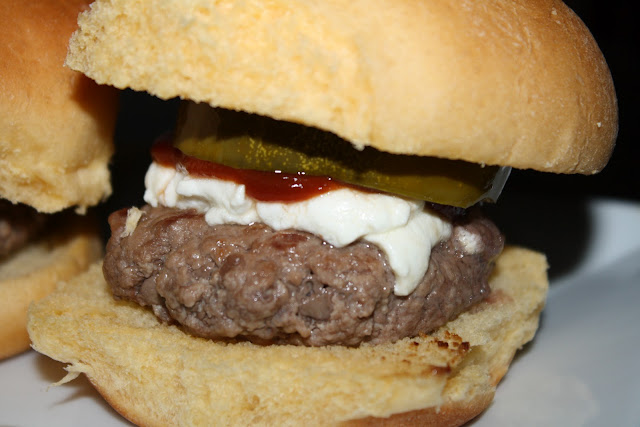 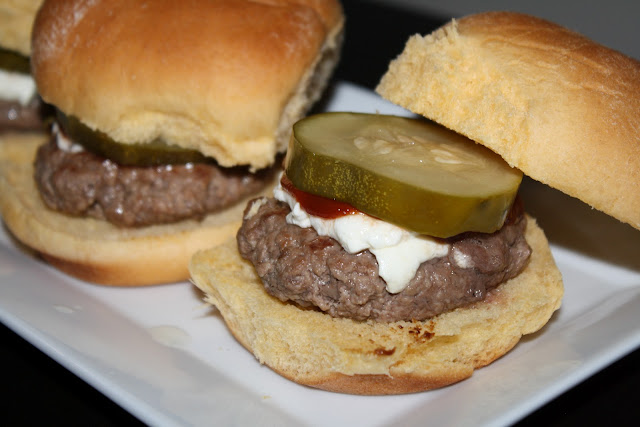 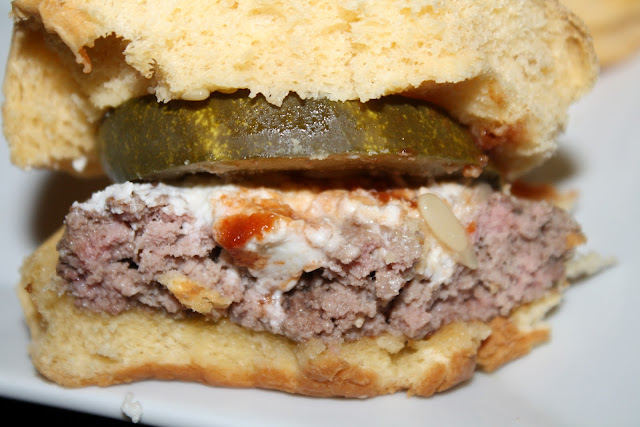 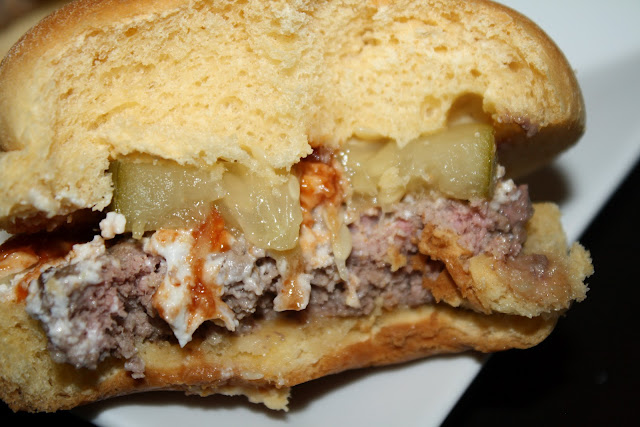 These were really good. Just as I had anticipated, the extreme flavor of the Hop-Pickles was tempered when they were thrown into the mix with a bunch of other ingredients. They were the crunchiest pickles I have ever had on a burger. I have always loved the combination of goat cheese and balsamic vinegar, and the cheese and ketchup here formed a sweet, gooey paste that played off the hoppy pickles.

I look forward to trying these pickles on other things like sandwiches and diced into relish, and I can already think of a few different burgers on which I will be trying them.

yum-oh as rachael ray would say

Those look fantastic - I am a HUGE fan of very crunchy pickles, so I probably need to pick some up. Is the greenpan the same thing as an orgreenic pan?

Not the exact same thing. Ours you often see on HSN being hawked by Todd English - and that's where we bought our set. It certainly appears to be better rated than the orgreenic pan.

Wow, I need to try and track some of those down!!

What's the girth on that gherkin? Looks like a big boy...

Ben Ben! This summer wasn't the same without your post on the Shrine of the Eternals.

Anon: Yeah, pretty big. One of 'dem short thick ones.

Just four or five slices per 16oz jar? That is thick. Looks fantastic. A new masterpiece in combination.

That's on optical illusion. There were probably a dozen slices.

Love how you highlighted the pickles on the sliders... usually they are last on the batting list of burgers.