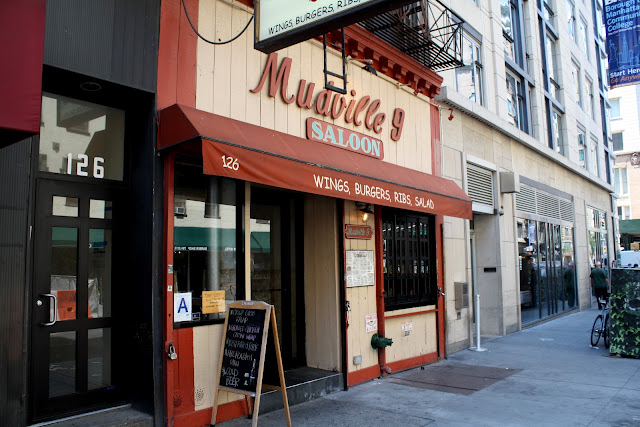 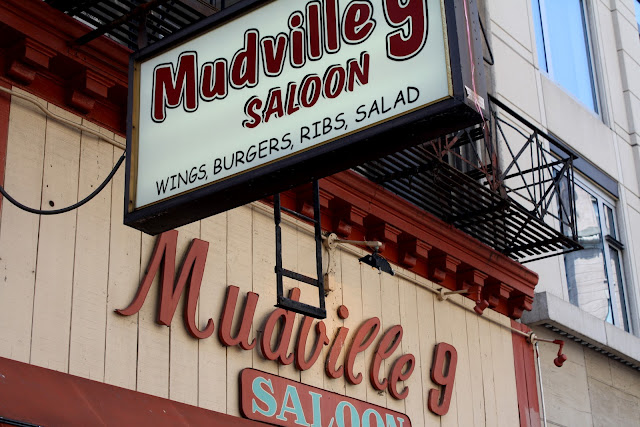 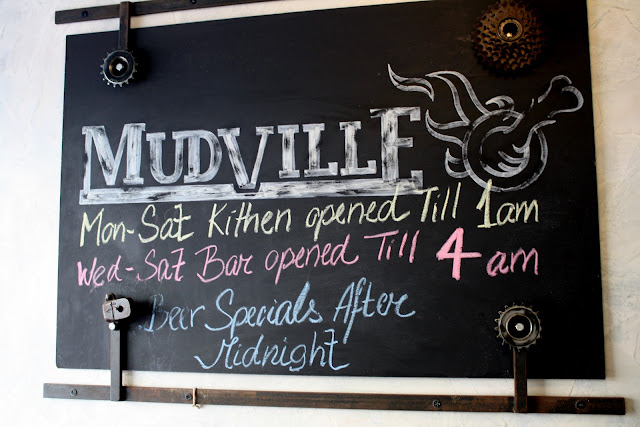 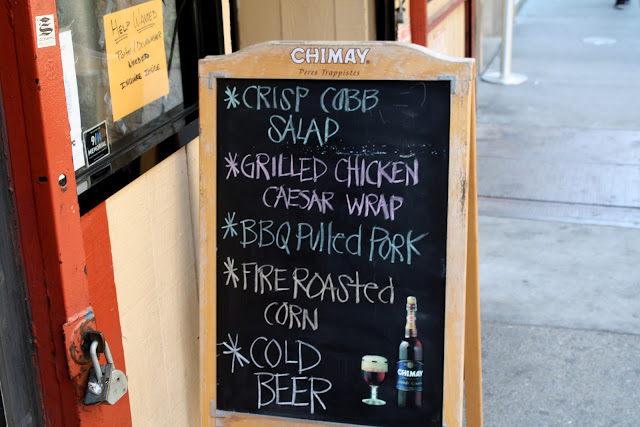 Once upon a time I had two long poems committed to memory. Why? I don't know. (Considering the age I was, it was probably because I thought it would impress women.) One of them was Casey at the Bat. Everyone knows something of the poem, but you might not know or remember that the baseball team was referred to as the Mudville Nine. The outlook wasn't brilliant for the Mudville Nine that day.

Not long after moving to Brooklyn I did a Google search for boneless wings. The name that jumped out at me the most was a saloon called Mudville 9. It's just across the river in Manhattan. A couple of times I walked across the Brooklyn Bridge with an idea to perhaps eat at Mudville 9, but both times I decided to go elsewhere.

But not long ago Elizabeth asked me to go to a shop in SoHo with her. I said sure, as long as we could get boneless wings first. I was craving them that day, and that sounded good to her, so we took the subway to Chambers Street and walked three blocks to the restaurant. 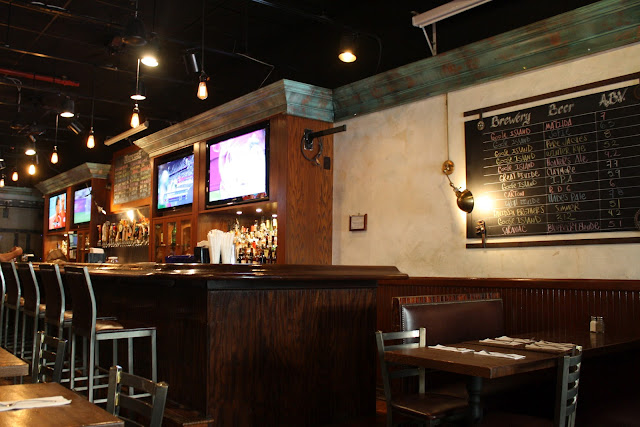 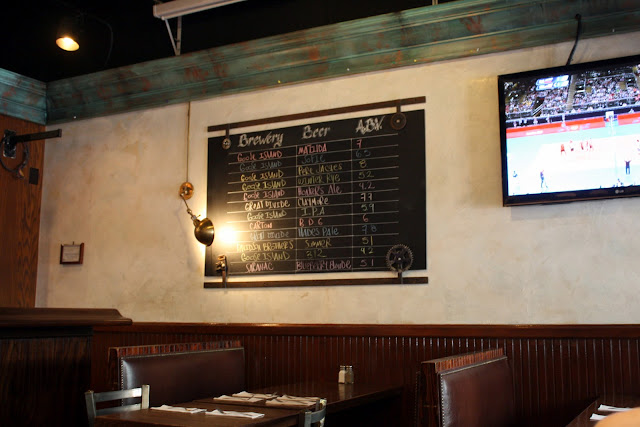 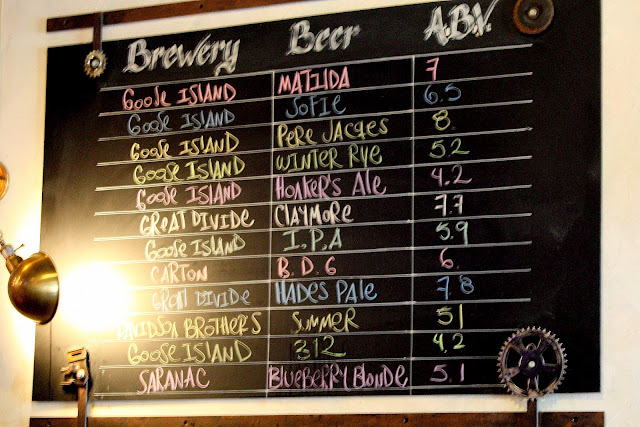 It's more of a bar inside than a restaurant, though I have no problem with that. A few guys were sitting at the bar nursing cold beers - it was really hot that day - but no one else was in the dining portion of the restaurant. We sat at a table, observed some of the Olympics, and turned our attention to the menus. 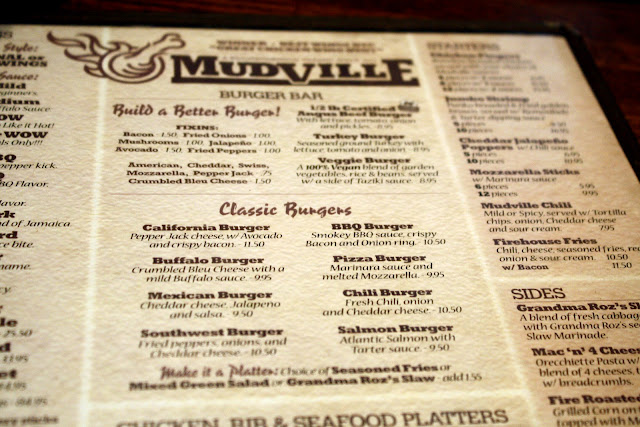 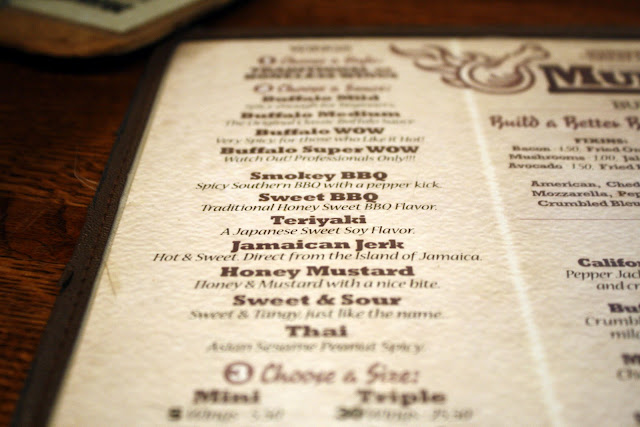 The menu has burgers and sandwiches and all manner of bar appetizers, but we had come for boneless wings. Mudville 9 offers wings in seven different sizes, from a "mini" (5 wings) all the way up to a "double bucket" (100 wings). I appreciated the mini size - it enabled us to try several different flavors.

(There is also something called a "Wing Ding": unlimited wings, fries, and pitchers of beer for two hours. There is a six-person minimum - which is double the number of friends I have in New York City; triple if you don't count my cat - so I doubt I'll be trying it, but it sounds like fun.) 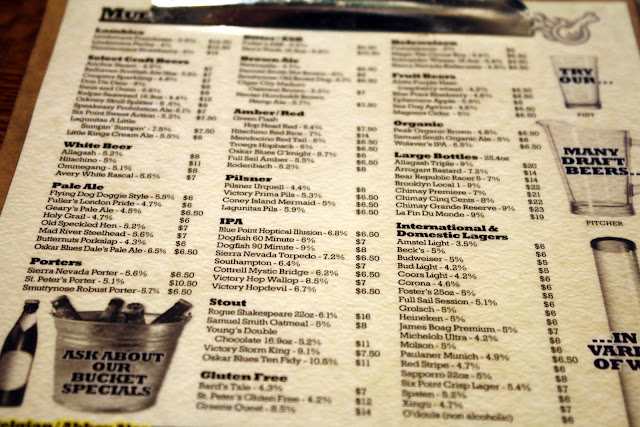 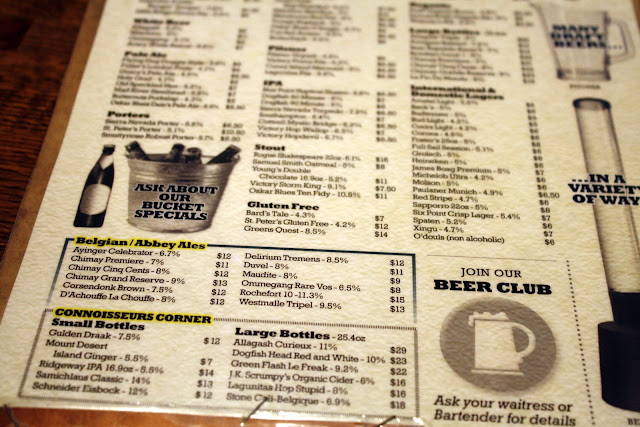 The beer list is really nice, one of the best I have seen in New York in the last four months. Maybe even the best. A Victory Prima Pils or Sierra Nevada Kellerweiss sounded really good. A Red Stripe, even better.

"So get one," Elizabeth said.

"Well, on a day like today that first one will go down too fast, and then I will need a second, and next thing you know I'm not wanting to go to SoHo, I'm rationalizing my need to sit here and watch fencing." 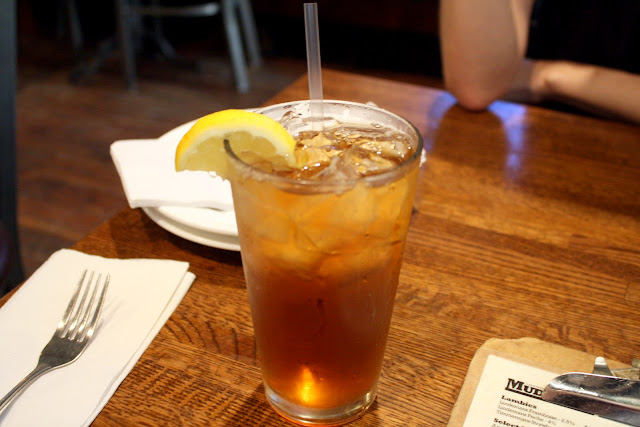 So I had an iced tea. I wish menus - or least servers - informed you when their iced tea is sweet tea. This was full of sugar. Now, I don't mind sweet tea under most circumstances, but I was in the mood for a cold, unsweetened tea that I could chug. If I had known this was coming, I would have ordered a soda or even just water. 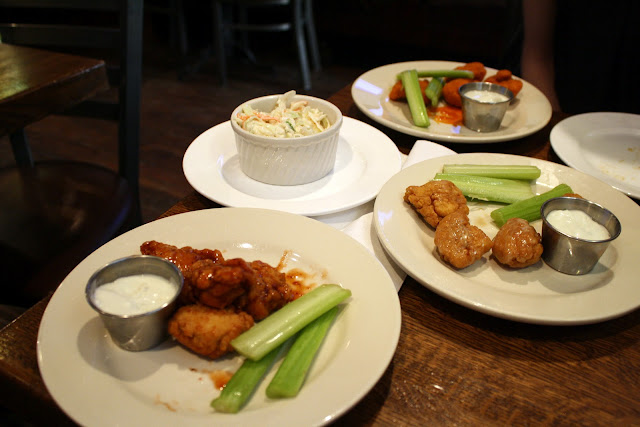 Our food arrived in just a few minutes, not surprising with the lack of other diners. We had three different orders of boneless wings and some cole slaw. 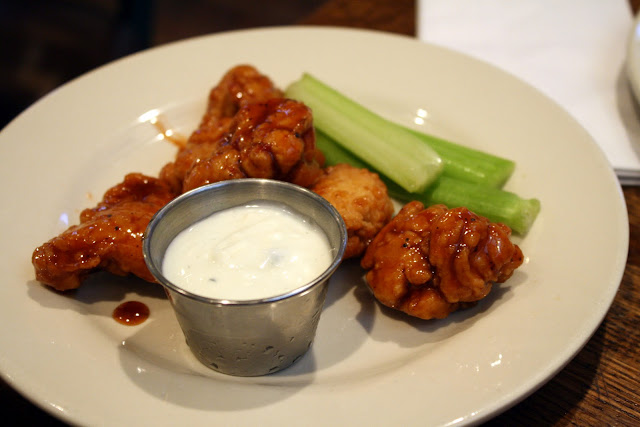 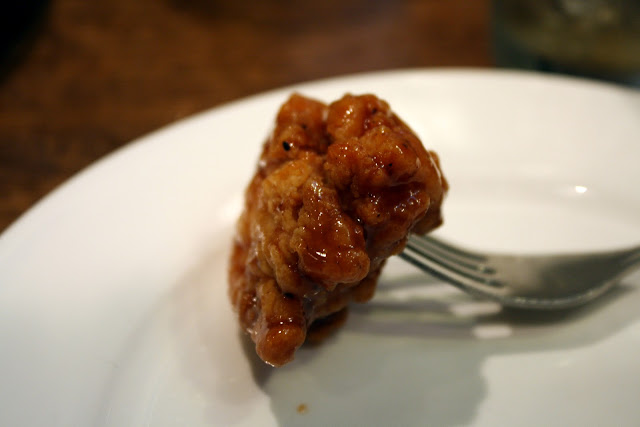 The Jamaican Jerk flavor was good, but it was sweeter than I was hoping for. "Hot & Sweet," the menu proclaimed. It was not at all hot. Maybe this is a problem with me - maybe I'm expecting too much from "jerk" flavors when I order them. I expect a Scotch bonnet or another very hot pepper flavoring. It seems like all I get these days are sweet flavors. 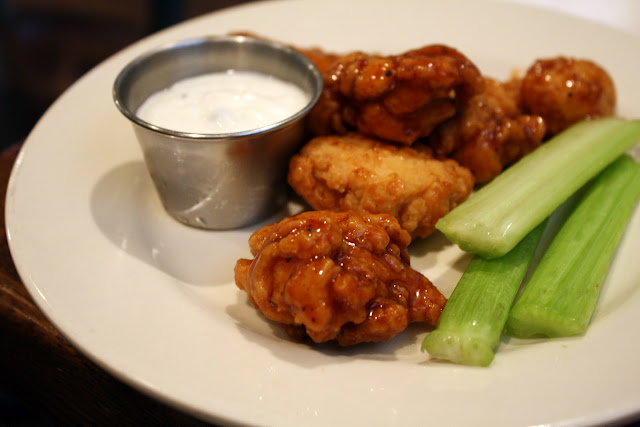 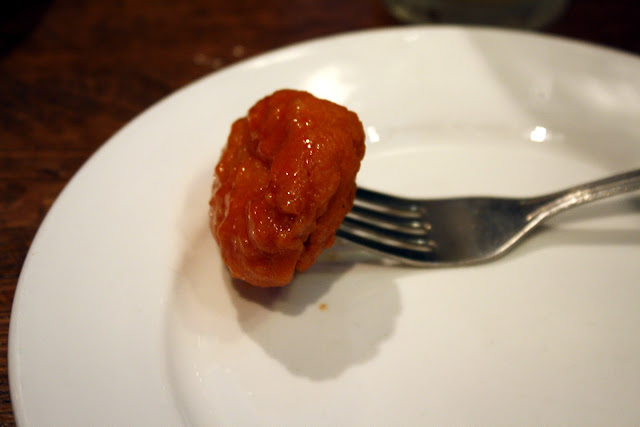 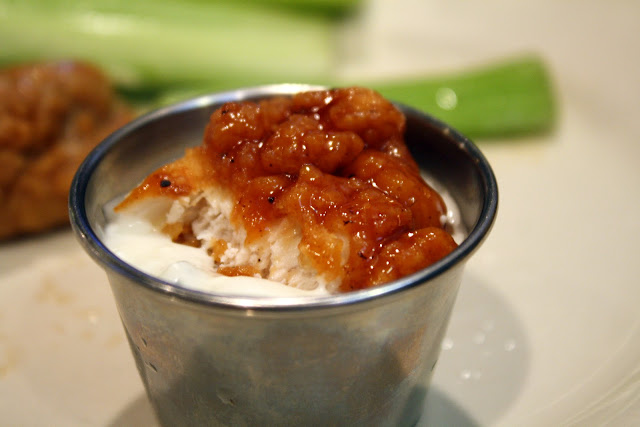 The Buffalo Medium flavor was my favorite of the wings. There was a pleasant buffalo heat, exactly what I was expecting. I asked the waitress what the most popular flavor is, and was not surprised when she said this one.

Now, I like a hotter flavor than this, and if I had been by myself I would have ordered the next level up, the "Buffalo WOW" flavor. (There is also a Buffalo Super WOW.) But Elizabeth doesn't like the heat quite as much as I do, so we stayed with this medium level, and we both really liked it. 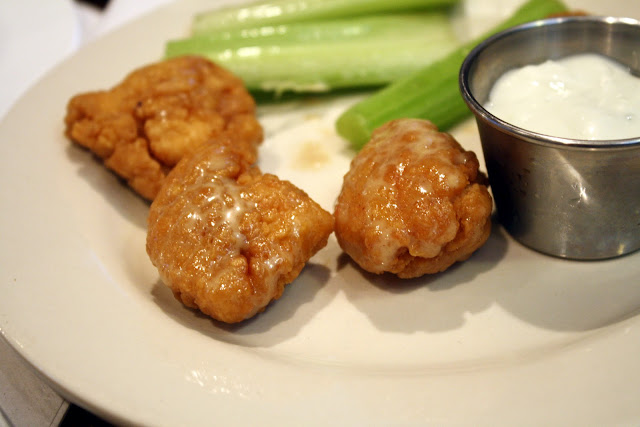 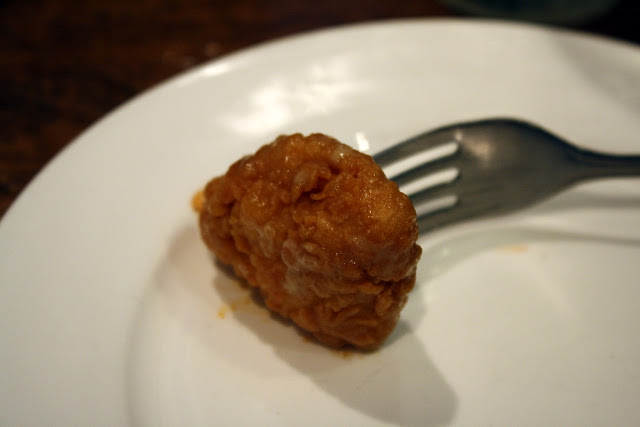 The Honey Mustard was my least favorite of the three flavors, but that's not a knock on the quality: this was the one flavor Elizabeth wanted to get, so we did. And I still liked it, but it was all sweet, no heat. 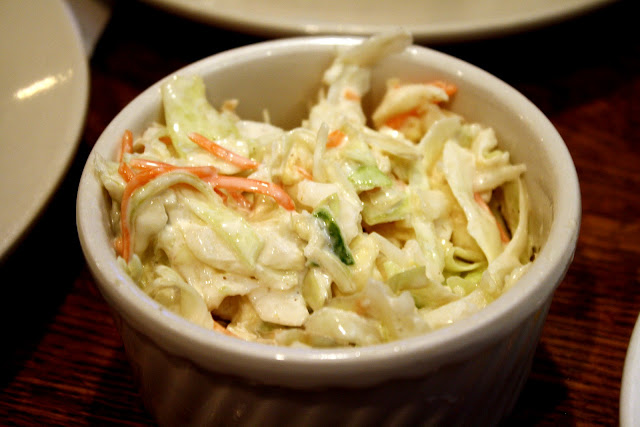 I wanted something else to accompany the wings, and I didn't feel the need to get anything like fries or mozzarella sticks; there was enough fried food here. I ordered the cole slaw, mostly because I loved the name: Grandma Roz's slaw. The dressing was described as "Grandma Roz's secret Slaw Marinade." It tasted exactly like KFC's cole slaw. I've never had a problem with that - it's not great, though by KFC standards it's one of the best things on the menu. We (well, mostly I) ate all of it.

I liked Mudville 9. For restaurant food, it wasn't anything I would call particularly good, but as I mentioned, it seems like more of a bar than a restaurant. And by those standards, the food was quite good. It was reasonably priced (I think the bill was 26 bucks) and I liked the atmosphere: dark wood, plenty of TVs, and an impressive beer list. I don't think I will be back specifically to eat here - there are thousands of restaurants in this city; I don't need to return to a place unless I love it - but I can definitely see myself returning for a cold beer or two.
Posted by JustinM at 10:00 AM

Nice, comfortable look to the place. I see bicycle parts! Are most bars out there open 'til 4am? Don't stay there that late.

I still prefer the 4 PM beer, that hasn't changed. Bars in Manhattan are open that late, but by me, which is a much quieter part of the city, most bars close around midnight or maybe 1 on the weekends.

BTW I saw Tracie's pictures of the lil' one yesterday, so adorable.

pp- i turn to an expert like u- arent boneless chicken wings just regular bite size chicken parts? why is wing in the title? i dont get it.

Correct, they are not wing parts - they are battered and fried breast meat. I think you know why wing is in the title: advertising. "Boneless wings" conveys all the flavor of a chicken wing without the mess or, for irrational people like me who hate bones in their food, the need to deal with eating around a bone.

I love walking the Brooklyn Bridge.

I appreciate that the wings aren't drenched in sauce, as they usually are here. Completely destroys the point of breading them.

I really like everything but the buffalo wings were definitely my favorite. It was a nice lunch stop.

I'm nobody's wing man but the Paulaner Pils? Now we're talkin'!
I once had jerk chicken in Montego Bay; the sauce - a mixture of catsup and Tabasco. It was delicious!

I haven't been to Montego Bay but I've eaten at Islands a bunch of times, which is pretty much the same thing.

This guy had sawed an oil barrel in half lengthways and cooked on the sidewalk. He stuffed about a quarter of a loaf of good ol' white bread into the bag just like Bill's Chicken in the day. It went very well with the Red Stripe!


My spouse and i felt so lucky Ervin could complete his basic research with the ideas he was given through your site.

I am so happy for Ervin. Please let me know if my blog about food can do anything more for his higher learning.