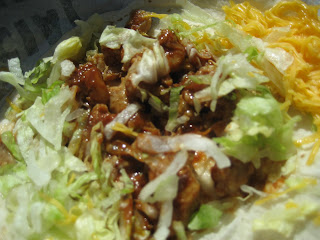 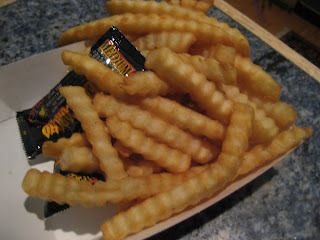 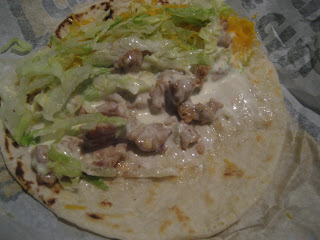 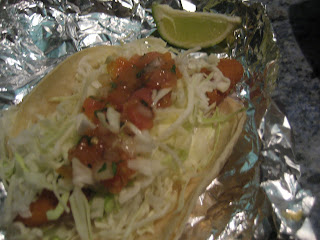 I've had the first picture, of the chicken mole taco, on my computer for a few months and decided not to post it because Del Taco discontinued the promotion, but then a couple nights ago I picked my brother up from the airport late at night and he was hungry so we went by Del Taco. And, in keeping with yesterday's post about Shakeys, I figured I would do another post from a place which I have been visiting for as long as I can remember.

When I was a kid I loved Del Taco because of A) their french fries, 2) the awesome little plastic ketchup packets you could dip your fries in, and D) you used to be able to buy their hamburgers in 6-packs and 10-packs. Of those things, only the french fries remain. I understand why they got rid of the ketchup packets: I'm sure they were much more expensive than the soft packets that everyone uses now. I don't know why they got rid of the burger packs. (I actually haven't order a burger from them in as long as I can remember; maybe they don't even sell those little hamburgers anymore.)

I have too many anecdotes from Del Taco to list, but I will share my favorite. In my early 20s my friend Tom and I used to meet for dinner every Friday night and go out for beers at an English pub. There were always people there wearing soccer jerseys, hanging out for hours, watching games and getting wasted. We decided that one day we would go there for lunch in soccer jerseys and hang out all day. We went there on a gorgeous Saturday during Labor Day Weekend and spent the whole day there. Finally, probably one in the morning, we got a cab home. We decided we were hungry and Tom offered the cab driver 20 bucks to take us to Del Taco. I was deciding what I wanted when Tom said he didn't want anything, which stunned me. A minute later he got out of the cab, went over to the bushes and threw up. He promptly got back in the cab and decided he was hungry again.

We ordered 24 dollars worth of food. If you've ever been to Del Taco you can imagine how much food this was. (For months I kept the receipt just so people wouldn't think I was making that up.) With that and the money we had promised the cabbie it ended up being a $60 cab ride. Of course, when we got back to my place we could only eat a little bit of it before we fell asleep. The next morning there were piles of hardened french fries, crusted tacos, and stuff we didn't even remember ordering covering the coffee table. I dared Tom to have one more taco, but he wisely declined.

Anyway, I have always loved their chicken soft tacos, so when they came out with the mole version last summer I had to try it. It was great. I usually don't like mole sauce because I find it too sweet, but this was spicy rather than sweet. If I had known the promotion was going to last for such a short time I would have gotten them more than once.

The other night when my brother went to Del Taco I wasn't even hungry, but since he was paying I figured I might as well eat again. (This seemed logical at 1 in the morning.) I got a chicken soft taco, medium fries, and a fish taco. The first two things were good, but the fish taco was lousy. I'm not sure I was expecting anything less, but I wanted to try it out just in case.

I don't think I'll ever stop liking Del Taco. I wrote them and asked if they would bring back the mole chicken taco, but I never heard back. This does not suprise me; most places do not respond to my requests. I once wrote a very elegant essay to McDonald's asking them to return the single greatest fast food promotion ever: the Shanghai McNuggets. I did not hear back. In fact, the only success I have ever had was asking Jack in the Box to bring back the chipotle chicken sandwiches. (Ok, maybe that wasn't because of me, but I had written them a letter about that just a month before they decided to bring them back.)

hey, pulledporker - can't believe we just found your blog! So glad you paid the cabbie to go through the Del Taco drive thru rather than drive yourself. Mole sauce may come back but can't promise when. Can we let you in on a secret? On Jan 20, Del Taco is introducing the Del Breakfast Bowl - eggs, hashbrowns, chili, cheese and cilantro, and breakfast service begins at 10 pm, so this is perfect for late night. Send me your address and I'll send you a gift card so that your first Breakfast Bowl will be on us. taco on, barbara - publicrelations@deltaco.com

Hi Barbara - Thanks for the tip, but I'm not sure how secret that will be. I mean, you just let my millions of readers in on it, too.

One of your millions of readers here saying that I think you should post that letter to McDonald's. You should let the world know what kind of eloquence they resisted.