Carne Asada and Mexican Coke, Underneath the Wistaria on a Saturday in March 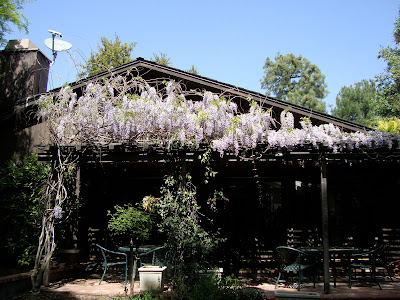 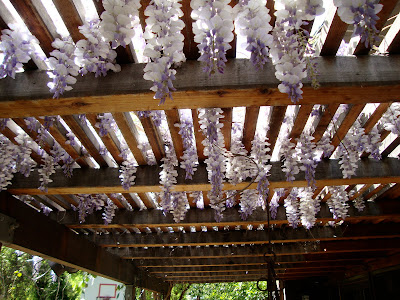 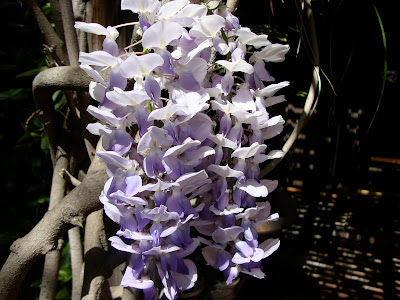 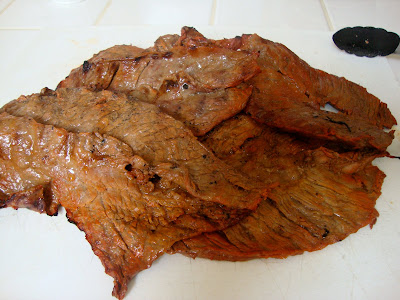 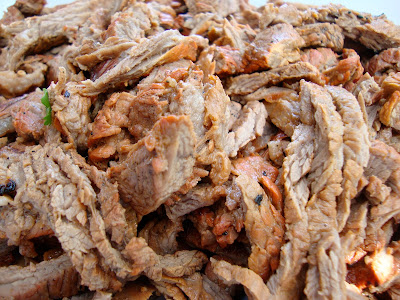 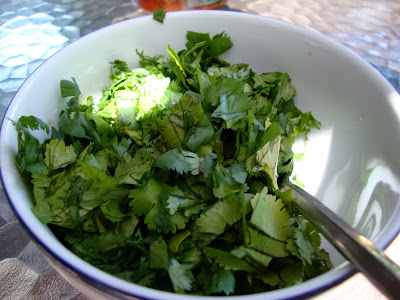 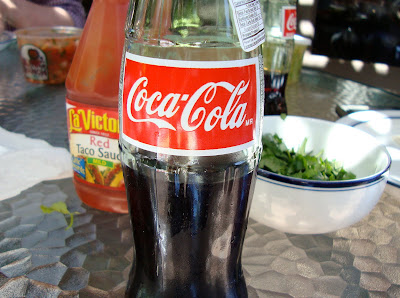 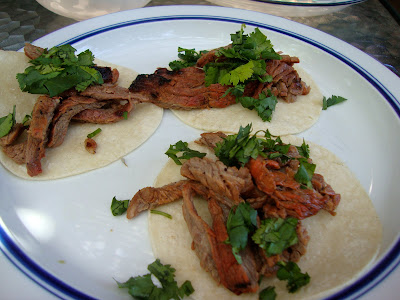 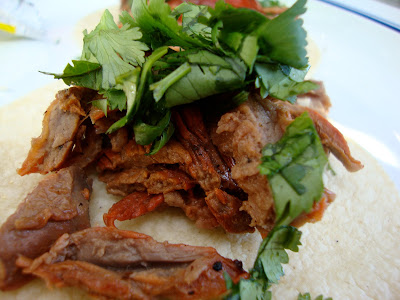 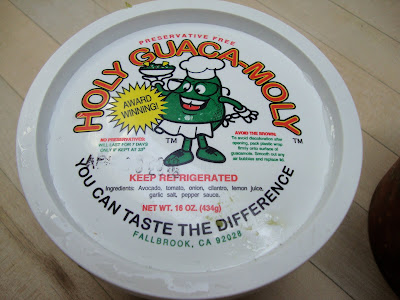 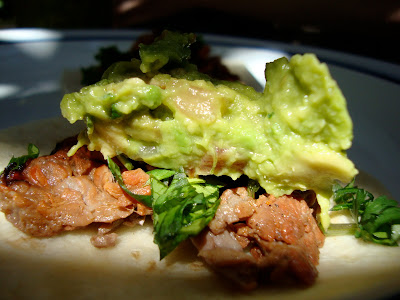 Ever since I started this blog in the summer of 2008, inspired by a comment my friend Phil made on the Barbecue & Baseball blog, I have wanted to write a title for a blog post reminiscent of something Richard Brautigan would title one of his short stories. There is no writer I have ever read - not my current favorites like Mark Arax or Jonathan Gold or my literary idols of the 20th century like Jim Harrison and Cormac McCarthy - who write sentences quite like Brautigan, equal combinations of whimsy and beauty.
Saturday afternoon I was over at my parents' house, and it felt like a nice day for carne asada. The Wistaria vine above the back patio was as beautiful as I have ever seen it. I have a lousy sense of smell, but I could smell this strongly from twenty feet away. I was grilling on the barbecue when Elizabeth sat down at one of the tables.
"Should we eat outside?" I asked.
"Yes," she said.
Years ago I used to either buy flap meat at Ralph's and marinate it for a couple days, or buy the carne asada at Taylor's butcher shop, which, although delicious, was a little too decadent for true carne asada. ("Carne asade for white people!" is how one of the butchers at Taylor's once described it to me. I have no idea what that meant but it seemed to make sense.) Then, a few years ago, I discovered the carne at King Ranch Market. Inexpensive (it was $3.99 a pound when I started buying it, it's now $4.99 but still a great bargain) and fantastic, marinated in their own blend, I became addicted to it. I cannot accurately state the number of barbecues and parties over the years at which I have made this carne asada, but it's somewhere in the dozens.
I purchased four pounds of it at King Ranch. Admittedly this is a lot for four people, but leftover carne asada is not a problem - it can go in sandwiches, top nachos, or just be eaten cold. The meat cooks on a hot grill in about three minutes per side. Sometimes there is a lot of fat that needs to be trimmed away, but this time there was not. I chopped it up while the table was being set. I spooned some carne into three tortillas for myself, topping it with cilantro. I assumed my parents would have an onion that I could dice, but they did not. Never make assumptions.
A few weeks ago, after reading something I had written, my dad asked what the difference is with Mexican Coke. I explained that the use of cane sugar adds a slightly different sense of sweetness and, at least to me, a cleaner aftertaste. He remarked that he had never tried it. So I had also picked up four bottles at King Ranch. My dad drank his in less than two minutes.
The tacos were outstanding. I ate five of them, adding hot sauce to my last two. My parents had been to the Victory Park farmers market in the morning and I had asked them to pick up a container of Holy Guacamole for Elizabeth, which she loves. So she added some guacamole to her tacos. I think that's disgusting but I took a picture of it anyway, since pretty much everyone I know thinks guacamole is good.
Posted by JustinM at 11:39 AM

Oooh, now I'm excited. This is my FAVORITE meal for outdoor cooking/eating.
Within close proximity to King Ranch Market there are many little Latin markets that have the "Ranchero" cut steak used for Carne Asada (Argentine Market at Villa and Wilson, Linda Rosa Market at Villa and Allen for example). Each has their own take on the marinade, usually some blend of Sunny D and who knows what else. They guard their recipes so don't even bother asking. You can also get "pollo con preperado" which is boneless chicken thighs with a dry rub that's amazing on he grill for almost free - $0.69 per lb. most places.
For the authentic experience modify the meal with a couple of bunches of the Mexican green onions - the ones with the large bulbs and a few jalapenos which are grilled alongside the meats and served on the platter as sides.
A pint of the fresh salsa (red, green or brown) available at the meat counter and some Los Tigres del Norte and Banda Machos in the soundtrack mix completes the picture.

And, of course, there is the delicious guacamole and beans!!!

Excellent information! I went to the King Ranch in Monrovia, otherwise I would have picked something up at one of those Pasadena markets you mentioned. King Ranch does include green onions with the carne, and I usually grill them and include them. I don't know why I did not this time.

When the weather is a little nicer we'll do this at my place, okay? You pick up the foods and I'll get the cerveza.

Brother, I've gotta say, I love the "title touch"! For some reason it sets the tone (or table if you're into thematics) for what comes next... Not that my food expertise is all that deep, and quite often not very thought out (which is one of the reasons I dig reading this daily... gives me something to shoot for if I ever decide to get my culinary act together) but I've always considered the setting when fondly looking back on what I'd consider my life's great meals. It could be argued that the surroundings in some situations are more important than the food itself, and especially if you consider "great food" and "great meals" 2 different things.
Example: Once upon a time in a former life, when I was younger and dumber, a group of about 11 buddies used to go down to Cabo every year. The further into the day we'd get, the lower our collective IQ's would go. One particular late afternoon we're doing the standard issue fish tacos, rice,and lobster thing with an insane amount of beverage, on the beach when one of our more intellegent bros bets us $10 each that he can run buck naked for 1 mile along the beach. Needless to say we took him up on that bet... not so much because we didn't think this crazy bastard wouldn't drop trou, but we didn't think he could run 1 mile... long story short, this mf'r disrobed and ran off into the distance not to be heard from again until late that night at Squid Roe... knowing how straightlaced this cat was when sober made it all the more hilarious. Anywho, point being, the tacos and such were the usual fare, but the remaining 10 of us had what turned out to be one great meal - all sparked by one translucent white dude streaking off amongst the numerous bewildered tourists... Don't know why Wistaria reminded me of this particular incident, but it did. Thanks Judge!

I am very pleased this reminded you of that incident.