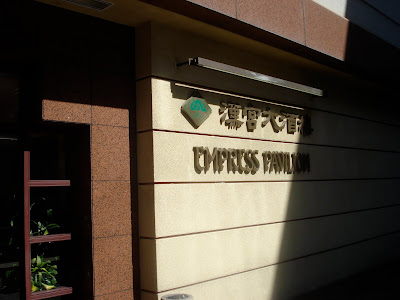 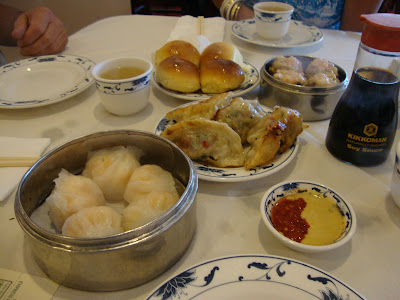 I've turned quite a few friends on to dim sum over the years. Some of them had never had it before; others had not realized how easy and fun it is to take the train down to Chinatown, have a couple beers with lunch, and while away an entire afternoon shopping in the Chinatown plazas, walking around Olvera Street, and people-watching at Union Station.

My friend Sylvia, who lives in England and visits a couple times a year, is another one who had never experienced dim sum. On her most recent visit she wanted to try it, so a few of us headed down to Empress Pavilion. Although she had heard about our dim sum adventures before, I did not tell her what to expect; I wanted her to experience the routine firsthand, and indeed upon sitting down we were given the quintessential Empress experience of being besieged by several carts within thirty seconds. I grabbed some of everything that looked good. Which happened to be everything.

Over the years I have learned there are three things I like most at Empress: the potstickers, the spring rolls (when freshly cooked) and the pan fried spinach dumplings. I am always able to get at least one of them, and on occasions when my friends and I get lucky we have had two. But never have I experienced all three on the same afternoon. Until this trip. 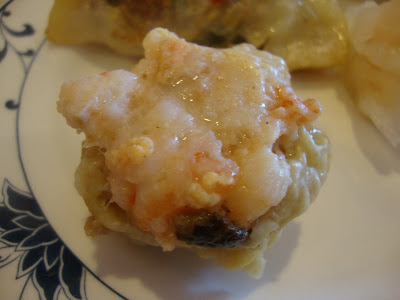 The shiu mai (there are several accepted spellings so I am going with the one Empress uses) - a dumpling with pork, crowned with a shrimp. Every dim sum restaurant serves a version of this, but Empress's might well be my favorite. The shrimp is always tender and never rubbery, which, if you know dim sum shrimp, is quite an accomplishment. The pork underneath ranges in temperature from very hot to wow-that's-gonna-leave-a-blister. These were the former. 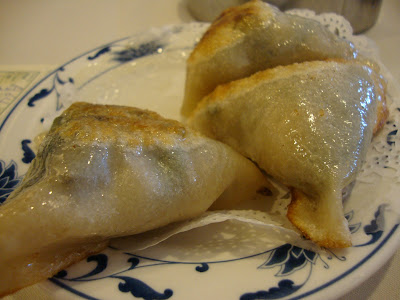 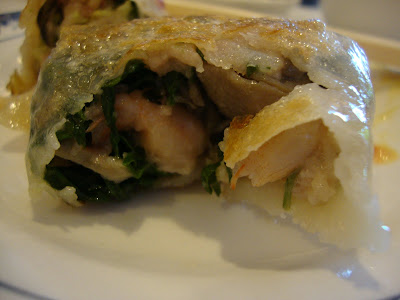 The spinach dumplings. If you like spinach you will love these. If not you will hate them. I am again at the point in my life where I love spinach. When I was a kid I ate it because I wanted to be strong like Popeye. When I became a teenager and realized it was healthy, I eschewed it in favor of fried foods at Popeyes. Now I love it again. 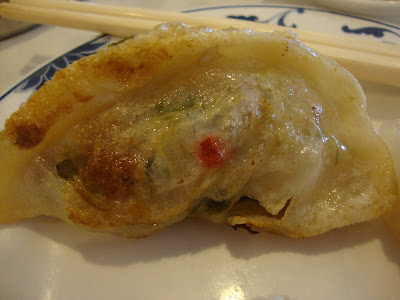 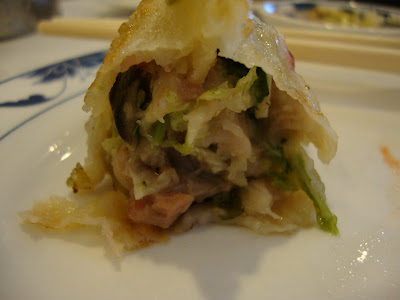 The potstickers vary tremendously at Empress. At their finest, they rival Luscious Dumplings as the best I have ever had. At their worst, they are flabby and the interior has little flavor (though I must admit even at their worst I still enjoy them). These were somewhere in between; they required a touch of the chili sauce to spice them up, but they were still delicious and firm. 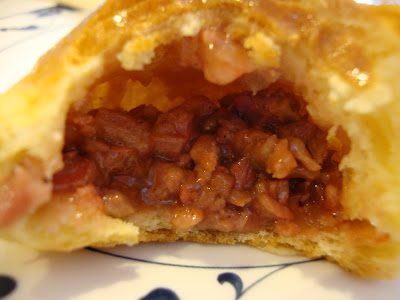 The baked BBQ pork buns at Empress are not my favorite. (I prefer the steamed version, but I did not see any this day.) Their mushy interior lacks a distinct flavor. It's kind of pork-y, but not much. The pork buns they used to sell at Famima!! were more flavorful. And the dough is absurdly sweet. But this trip was about Sylvia experiencing dim sum, so I felt it was important to get an order. 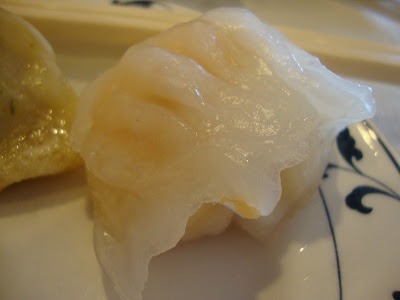 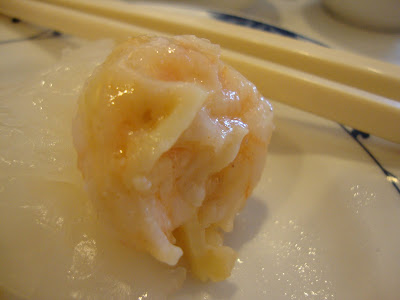 The shrimp har gow are very straightforward: shrimp and not much else, though again the shrimp are steamed perfectly. One day I will cleanly eat one of these in two bites without spilling the insides on the table. This was not the day. 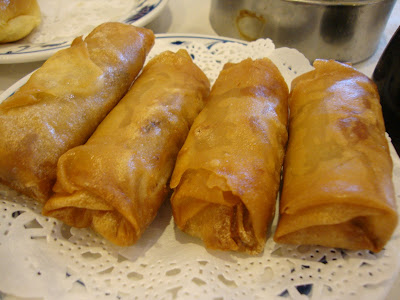 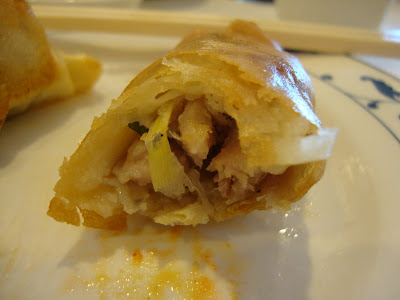 The spring rolls, when just out of the fryer, are one of the more enjoyable things you will ever eat. They are usually dropped on the table by a waiter with the caveat to be careful because they are hot. I'm not sure how long you have to wait for them to cool down. I think I once waited ten minutes and the thing still burned my mouth. So now I don't even bother waiting, I just accept that it's going to be scaldingly hot. There is logic there somewhere. I think. 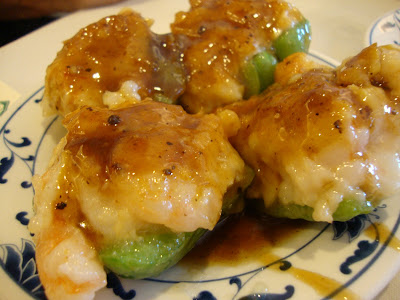 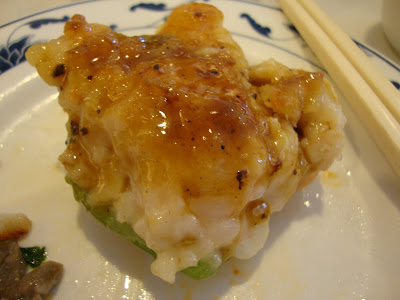 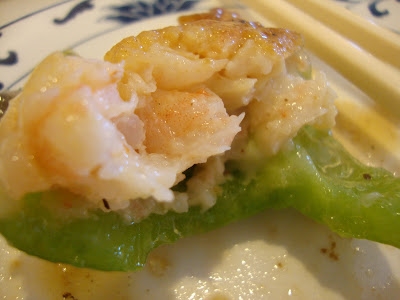 The penultimate routine my friends and I have when lunching at Empress Pavilion is to make some kind of primal noise indicating that we are all stuffed and cannot possibly eat another thing... and then order one more plate of food. We don't do it intentionally, it just sort of happens that way. I mentioned earlier the three things I love most; usually we are all done with lunch and then a cart comes by with one of those three items and we are forced to get it.

This day offered a new wrinkle. When we were finished and full an item came around that I had not seen before in dozens of trips to Empress: wedges of bell pepper with shrimp, topped with sauce. I looked at my friend Mick.

"Well, it's got green, shrimp and sauce. That's three of the four food groups, right?"

It was fantastic. The pepper was fresh and crisp and the shrimp was, not surprisingly, cooked perfectly. It was impossible to eat with chopsticks, though of course I tried. I will look for these on every trip to Empress from now on.

The final routine at Empress Pavilion is getting the bill and laughing at the cost. On this occasion, despite each having one alcoholic beverage, not to mention eating enough food to render it unnecessary for me to eat again that day, the total worked out to $14 per person.

There are not many better ways to spend lunch when entertaining someone from out of town, especially if he or she has never had dim sum before. I will give Sylvia the last word here:

"This was fantastic. I have never seen anything like this before."
Posted by JustinM at 9:05 AM

I wanna come on one of your dim sum adventures!

PP - in the shiu mai, do you mean the pork is hot as in temperature or spicy?

The former. "The pork underneath ranges in temperature..."

Did you ever have the sushi at Famima?

No. I ate their pork buns frequently when I had a few drinks in me and was walking to the train station, and on a couple occasions I bought some of their assorted dim sum and reheated it in my steamer. But their sushi was where I drew the line.