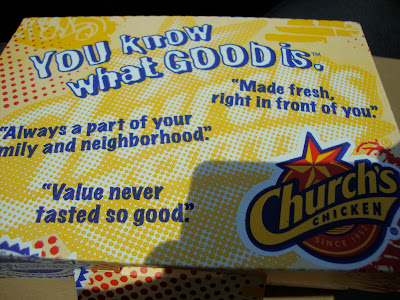 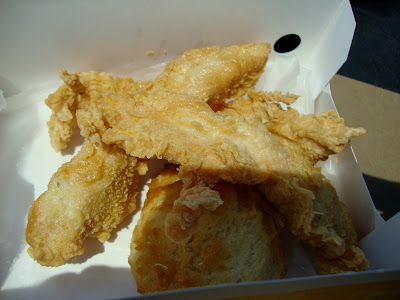 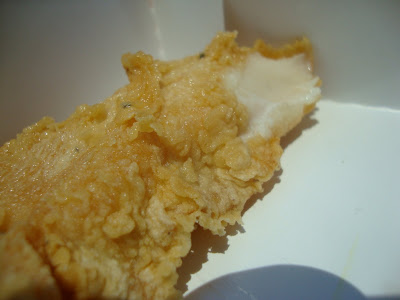 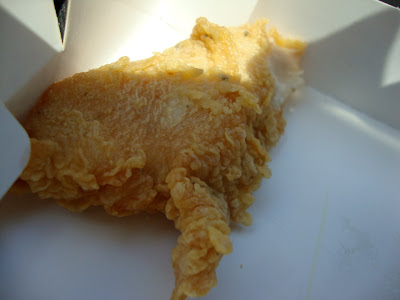 I've been having great luck with Church's lately. Their boneless wings are as good as any restaurant out there, and their 99 cent chicken sandwich was the winner of my Value Menu Chicken Sandwich Showdown. So when I heard they were coming out with a new "Spicier Spicy" chicken, I certainly wanted to try it.

The Church's I went to was a zoo. Kids were running around screaming. A woman sitting at a table eating fish & chips kept yelling at the guys behind the counter "Gimme some mo' tarta' sauce!" A woman who had gone through the drive-through and whose credit card was declined made a desperate lunge to grab for the food and drive off; she missed and then spent ten minutes pleading with the employee to let her have the food and she promises she would come right back and pay for it. It looked like violence might break out at any minute.

Obviously I loved it.

I ordered the three piece spicy strips. It took two employees to handle that order. Then I was told it would take four minutes. I said sure. A little more than ten minutes later I got my food. I was hoping it would not be overcooked. I decided to take it to the car. (At this point the chaos inside the restaurant was no longer funny; it had given me a headache.)

As soon as I opened the box I could tell the chicken was going to suck. The pieces were glistening with oil but I could tell they had not been cooked long enough, or perhaps not at a high enough temperature. Forget golden, these were barely a shade of yellow. But Church's has been good to me lately, so I decided to try them anyway.

Oh boy did they suck. There wasn't much breading on the chicken, it was just kind of a grainy batter, and the chicken itself was flavorless and as rubbery as any chicken I have ever had. I considered going back inside and asking if that was how they're supposed to be, but I had had enough of that place. I took a bite of each of the other pieces to see if they were any better. They were not. It was like biting into a rubber ball.

I threw the chicken away. Normally when I have leftover fast food I put in on a bench or on top of a trash can, in case someone comes along and wants to eat it. But this was truly terrible and I worried that just the three bites I had might make me sick to my stomach later on. (They did not.)

Normally I would say that I will go to the Church's in Pasadena and try these. (Their quality has always been higher than the other two Church's I have been to in the Southland.) But I don't even want to order these again.
Posted by JustinM at 8:01 AM

I absolutely agree with your findings on rubbery chicken strips at Church's. I normally prefer chicken strips when I eat fast food, but after encountering so many consistently rubbery strips at many different Church's locations, I will never again order their chicken strips. I wonder what they do differently than everyone else? However, I still like many of their other items.

Yeah, their boneless wings and Southern Style chicken sandwich are awesome... but I don't like their strips at all. I actually just split some with a friend of mine last month - the first time I'd tried them in 3 years, since writing this post. And they still were merely average.

I bought sme ystrday..they were so rubbery i could chew thwm up completely...im concerned its nor real chicken...alot of places inject a transparent gel into meats to imcrease size and profits...i have no idea what i was earing...i am certain it isnt chicken!

That's interesting, Marisa. I haven't had their chicken strips in years. Overall I don't think Church's is as good as it used to be. That's a shame, because a decade ago (give or take), I thought they were better than Popeyes. Not anymore.