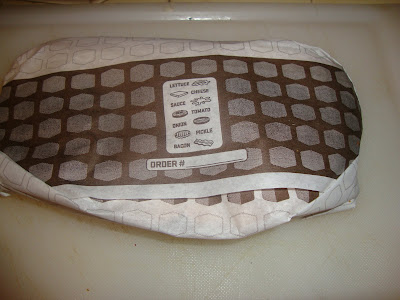 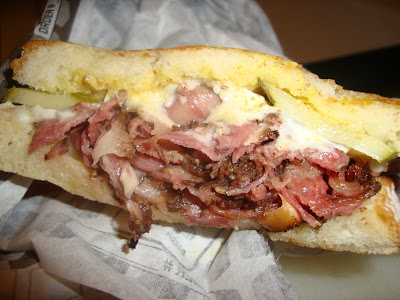 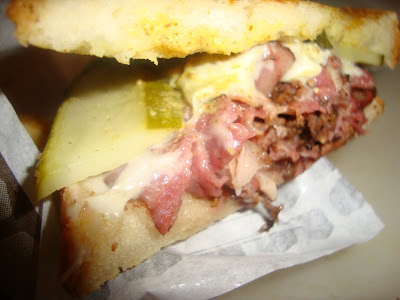 Last month, when writing about Wienershnitzel's Bacon Ranch Chili Cheese Fries, I mentioned that I have a hard time understanding who comes up with these ideas. There is a flip side to that coin: the products that look great on paper but are screwed up in the execution.

I have no trouble understanding why Jack in the Box decided to add a pastrami version to their lineup of grilled sandwiches. I tried their "Deli Trio" sandwich a few months back and was pleasantly surprised. The dressing on it was a cloying, oily, fake-cheese tasting sauce that my dog wouldn't even eat, but the meats, and especially the toasted bread, were very good.

So when I heard about the pastrami sandwich, with pickles and "deli mustard," I knew I should give it a try. A pastrami sandwich when done properly is one of the great things in life: a salty, spicy, chewy affair. Small pieces of pastrami will fall out of the sandwich and ideally you will want to stab every last morsel with a fork and cram them into your mouth.

Conversely, a lousy pastrami sandwich is one of the great culinary letdowns. Anyone who has ordered a pastrami and received a fatty mess of rubbery beef on a soaked roll knows exactly what I'm talking about. A bad pastrami sandwich will fall apart faster than Jonathan Broxton in the 9th inning.

I certainly wasn't expecting greatness from Jack's sandwich, but I was hoping it would be just as good as the previous grilled sandwich I tried. It was not. It was, unfortunately, terrible. The meat was all shoveled into the center of the sandwich; the bites on the end contained no meat. Not that I was complaining, though, since the meat was as bad as any pastrami I have ever had. It was full of fat and as chewy as Big League Chew. (Except for the crispy burnt pieces that tasted like hair.) The pickles, cheese and mustard were decent, and the bread was once again very tasty. But that was small consolation.

If you want a sandwich at Jack in the Box, get one of the others. If you want a pastrami sandwich, go someplace else.

(I should add, however, that Jack and I are not really on the same page these days. Items of Jack's that I think are good - like the mini buffalo ranch chicken sandwiches, or the outstanding spicy chicken bites, or the best-thing-I-have-ever-had-at-a-fast-food-restaurant toasted ravioli - all disappear. While items I find terrible, like the mini sirloin burgers, really big chicken sandwich, and the horrible pita snacks all stick around.)
Posted by JustinM at 9:43 AM

Has Broxton really sunk to be the butt of pastrami jokes? Sigh - how the mighty have fallen.

After the 2-run homer in the 9th to Juan Uribe a couple weeks ago, I would say yes, he has sunk that low.

Hey now. Not like Rodney has been winning over the Anaheim faithful lately. But kudos for getting rid of that loser Fuentes.

But really, what's the point of arguing over who's closer sucks more when both teams have been out of the race for months...

Last year's season was clearly dominant. A WHIP under 1, a fastball that touched 100 mph, and well over a strike out per inning. He may have been the most dominant closer in the NL last year.

But something has changed this year.

Being a dominant pitcher in the NL is like being valedictorian of summer school.

Numbers only matter if you follow through in big games. He killed the Dodger's postseason the last two years and would have blown the all star game this year if it wasn't for a great play by Marlon Byrd.

Well, this debate could go on forever talking about things like whether or not there is such a thing as coming through in the clutch or not, or what kind of sample size you need before you can actually say whether a player is good or bad in the post season.

But besides all that, Broxton had a bad series against the Phillies last year, but other than that didn't pitch that bad at all in the three series before that.

Broxton was a huge reason the Dodgers made it to the playoffs in each year.

As for the AS Game, getting three outs against the best players from the AL is a pretty amazing feat - regardless of the defensive plays behind you. How many NL pitchers have saves in the All Star game in recent memory? Randy Myers in '95 is the last one to accomplish that feat.

I guess I look at this from a long-suffering Blue Jays fan - a team with a revolving door at the back of the bull pen. Plenty of teams - I have no doubt, Toronto included, would kill for a pitcher like Broxton to anchor their staff. There just aren't that many guys out there who have both the eye-popping ability, and a bit of a track record of being able to get the job done.

This is really filling up this marvelous weekend food wrap up with plenty of baseball talk - hope you don't mind, Justin.

I agree with your perspective as a Jays fan (although as a "long-sufferer" you have still seen two championships since Dodgers fans have last seen one); many teams would love to have a pitcher like Broxton.

However I am very reticent to use a word like dominant about him. He has a great fastball but he just doesn't have what it takes in pressure situations. Statistics about relief pitchers, especially closers, take a backseat to the one question I ask: If a closer comes in to face your favorite team, are you resigned to a loss? When I see Mariano Rivera enter the game against the Angels, I know it's over. When I used to care about the Dodgers (say, mid-late 90s) and Trevor Hoffman came in, I said "Aw, f***")

I have never once thought that about Broxton. Personally, I was more impressed with him as a middle reliever in 2007 than as a closer in 2009.

Although, if that is our definition of dominant, there may only be one guy (Mariano) in the major leagues right now that you can say that about.

Everyone else is either too young, inconsistent, injury prone, or just the best option on a team with no true closer.

The prime span of a reliever seems to be shorter than the life of a moth. Just when I get to the point of looking forward to seeing a closer come in (Gagne, my most recent favorite) they lose their touch for some reason or another (sigh).
I recently watched highlight reels from the 1963 and 1965 World Series and was surprised to see how many of the pitchers pitched the full 9 innings. Of course it helps when they strike out between 9 and 15 batters...

As for this pastrami sandwich - just looking at it gives me the drizzling shits. A real grease bomb.
If you haven't tried Langer's yet we need to talk.

Ben: I agree, I would call Mariano the only dominant closer in baseball, although I have seen games where Bell or KRod threw one pitch and I thought Okay, that's ballagame.

Tim: True story: I was at Gordon Biersch in Pasadena over 4th of July weekend in '04 with my then-girlfriend, and who was on the patio two tables away but Monsiuer Gagne, in the midst of his 84 consecutive saves streak. I said "If drinking this shit beer here doesn't ruin his streak, nothing will."

The next game? He blew the save.

But I do like your "lose touch for one reason or another" line. I think we ALL know the reason with Gagne.

I was filling up at the Mobil station on Arroyo Pkwy one afternoon when a car pulled in that looked like a customized Chrysler Crossfire. A big guy got out and i asked him about the car (it turned out to be one of those then-new baby Bentleys). When I went into the snack shop The guys were staring at him through window. i asked what was happening and they told me it was Eric Gagne! I went back outside and said to him "I just want to shake that hand of yours". He smiled, shook my hand and split.
So, have you tried Langer's?

Nope. For years we have talked about changing up one of our dim sum trips and going to Langer's, but when it came down to it we always just decided for the dim sum. After you and Herb were telling me months ago how great it is, I decided to go there two months ago on my birthday. But then the patio at GST and live music at 72 sounded like a better plan.

Jumpin' Jeezuz, Justin! I didn't sign on here to become your straight man.
But, if you insist, Jack in the Crack it is....

A guy whose screen name is a pun on a Pierce Brosnan TV shown will never be my straight man...

A good sandwich should not have a bulge in the middle of it, like that. The insides shiould be evently spread. Points lost for mine.

Igomi: I certainly agree with your logic, however I would have overlooked it on a fast food sandwich if the insides had been tasty. But the meat was terrible. It failed all around.

Dude, you have to go to Langers