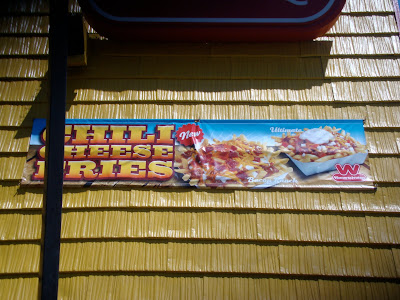 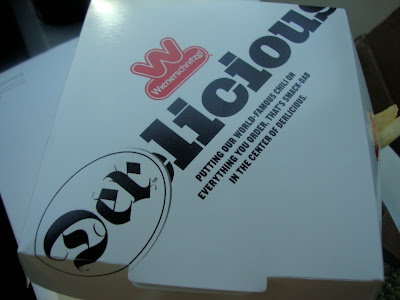 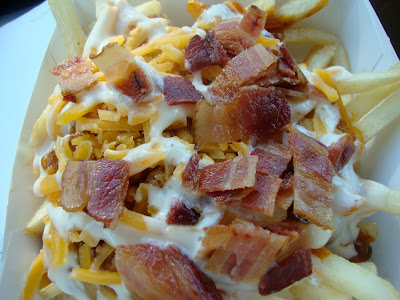 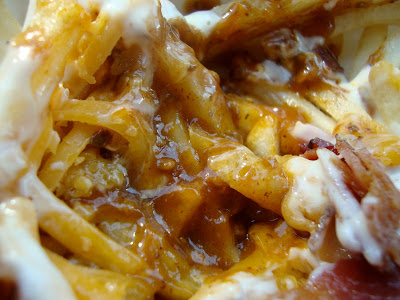 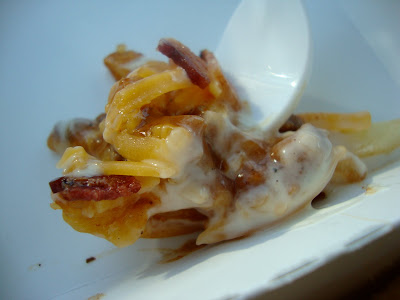 Sometimes even I get perplexed by fast food promotions. Take, for example, Carl's Jr.'s Philly Cheesesteak Burger. I have talked with quite a few friends about Philly cheesesteaks over the last couple years, particularly in regard to Philly's Best. Not once did anyone say "I like a good cheesesteak; I just wish I could get one on a burger."

Similarly, I am trying to imagine the person who pitched the idea for Wienerschnitzel's new fries: "You know our chili fries? I think people would love it if we put bacon and ranch dressing on them."

But someone somewhere thought it sounded like a good idea and it got the green light. When I first heard that Wienerschnitzel was coming out with some new chili cheese fries, my hopes got up for a second. I thought maybe they were bringing back their chipotle chili - not great, but much better than the original, bland version - and putting it over fries. Then I found out it was two different types of chili cheese fries: the "ultimate," served with tomatoes, onions and sour cream, and the self-explanatory bacon ranch version.

There was certainly no way I was going to try the former. I'm not a fan of chopped tomatoes. If someone makes me a homemade pasta or pizza with tomatoes on it, I will eat them. But the idea of chopped fast food tomatoes is not appealing. Neither is fast food sour cream. Elizabeth has turned me around on sour cream since she moved to California, one of many things I used to dislike but now don't mind, like cake, Scrubs, the smell of lavender, and the McDonald's two cheeseburger meal. (Although I still hate the Yankees just as much.) But trying sour cream at Wienerschnitzel isn't going to happen.

Ranch dressing isn't one of the my favorites, either. I don't hate it but I don't get it: there isn't much flavor to it other than milk and sour cream. I don't understand what kind of food it's supposed to complement. But I have never tried it with chili. Is there a chance it's actually good with chili? (Spoiler: no.)

(Full disclosure: when I was a kid I used to cook "Micro Magic" french fries, little cardboard containers the size of a chalkboard eraser that heated up unimpressively in the the microwave. What did I used to the dip the fries into? Ranch dressing. Of course, my memories are of eating them in front of the TV watching professional wrestling, so that pretty much tells you my level of maturity at the time.)

I headed down to the Wienerschnitzel in Alhambra. I have written before that I like this one. There are newer ones around that are indistinguishable from Dairy Queens. There is even a Wienershnitzel kiosk in the Arcadia mall. But this one reminds me of the way they used to look when I was young: the A-frame structure, the drive-through line that cuts through the heart of the parking lot, the filthy round tables at which to eat.

I ordered the fries and took them to my car. I was surprised at the quality of the bacon when I opened the box: it looked good. And indeed it was. And the fries were hot and crispy, something I've never experienced at Wienerschnitzel before. But here's the thing: the ranch dressing added nothing to the chili and cheese. It masked the taste of both. These might as well have just been fries with ranch dressing. The one time I get great fries at Wienerschnitzel and they're drowned in ranch dressing. Just my luck.

So, they weren't terrible... they just weren't very good. I guess I just do not "get" them. Maybe someone who loves ranch dressing will think they're great. I did not.
Posted by JustinM at 9:29 AM

They might want to chop up hot dogs and top the fries with them.
Skip the ranch though.