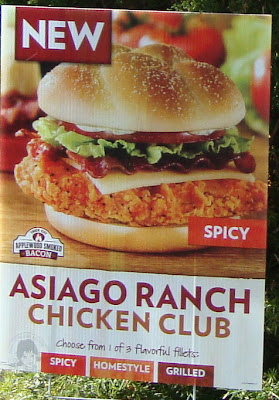 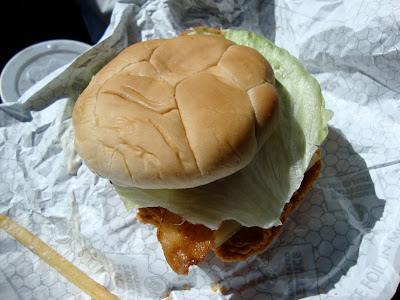 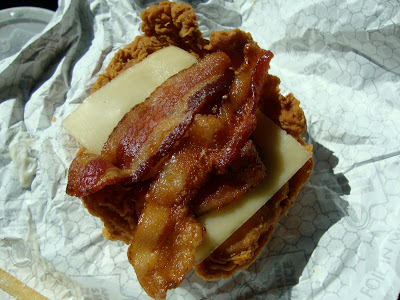 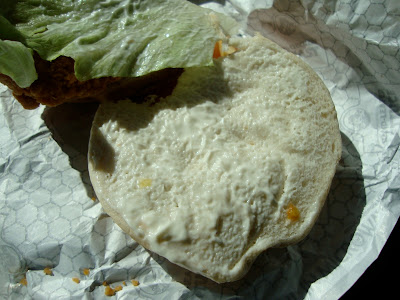 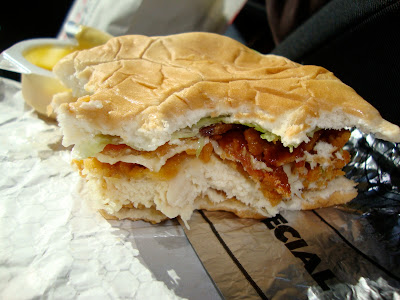 I usually enjoy Wendy's promotions. They're never anything too ambitious - just the addition of bacon or some kind of new sauce to whatever items they already serve - but I've always been a fan of their chicken sandwiches and nuggets.

So when I heard Wendy's was making a chicken sandwich with Asiago cheese, I wanted to try it immediately. Asiago has long been one of my favorite cheeses, a sweet, slightly nutty, smoother version of Parmesan. There is no cheese I more enjoy eating with red wine. Other than Kraft Easy Cheese, obviously.

I headed down to the Wendy's closest to me. That's always an adventure. 19 times out of 20 I won't go through any drive-through, but I always do at this Wendy's (every time I've gone inside, the same crazy old lady has been there and she creeps me out). It took about five minutes for the car ahead of me to order; he had to repeat his order several times. It took slightly less time for me, but I had to repeat the order even more than he did. The woman on the loudspeaker was not being coherent; at one point I believe she asked me if I wanted to go fishing with her. But I could be wrong about that.

I received my sandwich and pulled over in the parking lot to eat it. The sandwich looked very good when I unwrapped it. But it looked better than it tasted - it was very dry. It wasn't bad, the bacon was crispy and high quality, and the chicken was as hot as any fast food sandwich I have ever had. But the flavor of the Asiago was nonexistent in each bite. I even tore off a small piece of the cheese and ate it by itself, trying to detect any of the traditional tastes of Asiago. I could not.

There was a ranch sauce on the sandwich that added nothing. I don't know why Wendy's decided to go with this condiment: they added a fancy cheese (well, supposedly they did; this could have been American cheese for all I could tell) and quality bacon... couldn't they have come up with a better sauce than ranch?

And one other thing to note - you can order the sandwich grilled, homestyle or spicy. I requested it spicy. I'm pretty sure they gave me homestyle. It's not that big of a deal - at this particular Wendy's, I don't believe they have ever once gotten an order correct the first time; I'm just glad there wasn't a razor blade in the sandwich or anything like that- but I think the spicier version would definitely be superior. Hopefully it would add a layer of flavor to the sandwich that this one lacked.

So, will I ever get it again? No. I would rather just buy some nice Asiago at the store and get a 99 cent chicken sandwich to throw it on. (This sandwich was almost five bucks, which seems way too high.) But, I will say this: if there is a Wendy's near you that you trust, that you know will get your order correct and possibly use a higher quality cheese than this, then you could do a lot worse than this sandwich.
Posted by JustinM at 10:34 AM

The spicy chicken nuggets are always a good fall-back order. Those are delicious and a nice amount of spice.

Remember the Monterey Ranch Chicken Sandwich? That was like 20 years ago or something.

wendy's has definitely stepped up their bacon game in the past year or so. i remember they initially touted their "applewood smokeed bacon" and i was at first skeptical. but even when i get the jr bacon cheeseburger nowadays and i take a bite im like damn, this bacon is good!

I think their offering of this sandwich has far less to do with the asiago cheese offering, but rather finding a creative way to bring back the Monterey Ranch Chicken Sandwich. Long a fan favorite, it doesn't quite mesh with Wendy's new "gormet" themed offerings. Calling the same cheese Asiago probably provided them a way to resurrect the sandwich, while giving it a bit more marketing class.

Liz: I remember a hot girl first telling me about the spicy nuggets and then I went out and tried them within the hour.

Anon 1: I agree. The first thing I have always done is remove the floppy, fatty bacon from a fast food sandwich. But at Arby's and lately Wendy's, I do not.

Anon 2: I had not thought about it that way. There was probably a decade when I did not eat at Wendy's, but back when I was a teenager I definitely liked the Monterey Ranch sandwich. I don't know if I would now, but I'm sure it would be really popular. Don't they have to charge less than five bucks for it, though?

next time, gotta get a frosty to finish off the meal. Freakin love those frostys!

Love you fast food reviews/smackdowns. This sandwich does look look $5 worth and that ranch part sounds gross. Thanks for taking one for the team !

Great blog and post here. Wendy's? Yeah... no! I had a bad experience with them once. And once is enough. Thanks,

By any chance was it the one in Alhambra? It's comical how inept they are.

You are correct about that.

See, I'm a bit of a Wendy's connoisseur ... I eat there quite frequently, and I have been ordering the Combo 6 - spicy chicken, ever since I started going.

Over the years I started ordering it with out tomato.. and asking them to add cheese and bacon..

I'd also add a special sauce to my burger called "Ancho Chipotle Ranch" (ancho is a type of pepper, it isn't anchovies).. delicious.

They've since discontinued that dressing, as it was part of one of the Wendy's taco salads that is no longer offered.

In any case, I go to a Wendy's that makes very high quality burgers most of the time, so this offer was very exciting to me, as it added the bacon and cheese for me, and the Asiago, I found was a very welcome addition. The taste was absolutely noticeable. I was surprised to hear you couldn't taste it, but I have considered ordering two slices of cheese for an added layer of that particular flavour.

I have begun using the dressing "Creamy Red Jalapeño" which is pretty good.. or alternately I'll add a mixture of ketchup and mayo.

Definitely my favourite item on the menu, and I hope it won't be discontinued anytime soon.

Thanks for the comments, Joel. I'm actually considering going to a different Wendy's to try it again. The Wendy's closest to me is the worst one I have ever been to. I don't think they gave me the spicy chicken and the cheese was completely bland. I want to see if a different one will serve a better sandwich, because it has a lot of promise.

This week I had a Wendy's grilled asiago chicken sand. w/bacon...it was delicious and very moist!
Tonight, to consume fewer calories, I ordered a jr. bacon cheese burger (very good bacon) and baked potato w/sour cream and some butter spread...only to find out now that it equalled MORE than the chicken sandwich! Next week's treat will be asiago chicken for me.