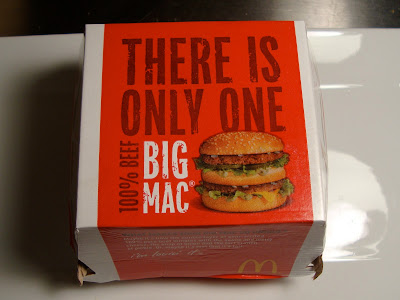 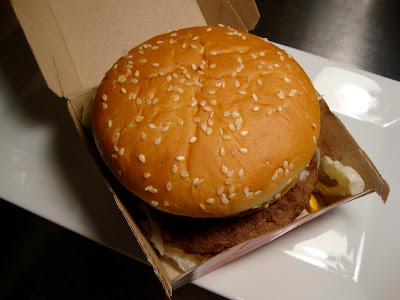 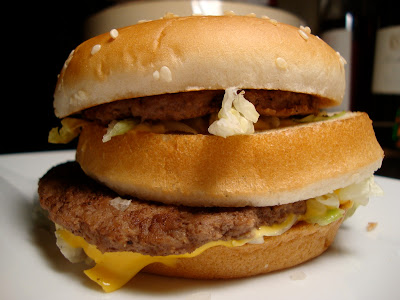 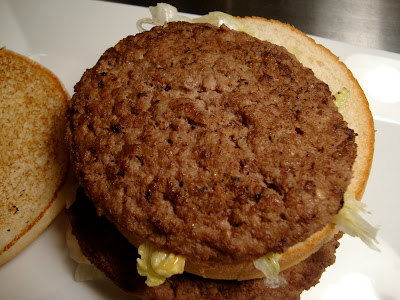 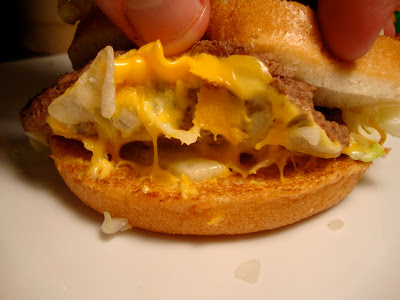 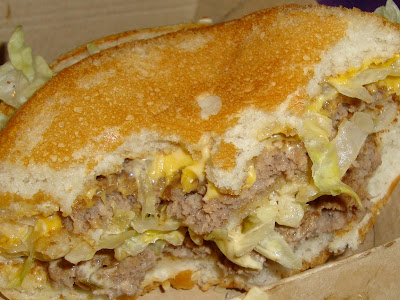 "The world's most popular sandwich," (according to, well, McDonald's), the Big Mac has been around for four decades. I remember my last one clearly, train wheels runnin' through the back of my memory, although I'm too embarrassed to admit where I ate it. It was many years ago and I did not expect I would ever eat one again. There are far too many great burgers in this town to bother with a Big Mac.
But the other night, when I picked up the McNuggets for my Shanghai McNuggets post, I was given a Big Mac that I neither ordered nor paid for. But seeing as how the McDonald's in South Pasadena has screwed up my order many, many times by not giving me something, I had no problem taking the free Big Mac.
I decided I would write about it. But that meant I had to eat it, of course, and here's the thing: it looked disgusting. Is this what the Big Mac has always looked like? There were a few shreds of white lettuce poking out the sides, the typical plastic-looking cheese, and a couple patties that look like they had been sitting out for weeks. (Actually, that's a horrible description: McDonald's patties don't change appearance when they've been sitting out for years.)
I would love to write that eating a Big Mac again was a beautiful reunion, that I wondered why I'd ever let them leave my life. But I can't. It sucked. It was very dry, even with the "secret sauce," and the dominant taste was the rubbery beef.
Like my experiences at Bob's Big Boy and Shakey's last year, I realized that my tastes have changed and some things I once really liked to eat mean nothing to me now. I was less than halfway through the burger before I realized that this would most likely be the last time I ever ate "the world's most popular sandwich." And I'm more than okay with that.
Did I really choose to eat one of these when I was in  ■■■■?, I thought to myself. What a freaking moron I am.
Posted by JustinM at 11:02 AM

For some reason, I still love 'em. Long live the morons!

I'm sure you understand - you're not a moron for liking the Big Mac. Hell, I like McNuggets - have you seen what they look like before they're cooked?

But I am certainly a moron for eating a Big Mac in that particular place, considering the other options I had.

What fast food burgers do you like? What is your favorite?

I know where you ate that previous 'Mac. You were young, it's ok, baby *pats your head condescendingly*

Michelle: For the Mega-chains, there really isn't anything I like very much. I'm much more likely to get a chicken product.

For the smaller or more regional chains, I would say the In-N-Out Double Double has to be #1. It used to be Fatburger but there just isn't the consistency anymore. Five Guys is probably up there (if they used In-N-Out's buns they might take the top spot) and a Tommy's chili burger is always nice.

SuperLarge: Yeah, you know where it was. I was younger, but old enough to know better.

I have eaten at McD's when I was there. I have a valid excuse though - they still had the deep-fried apple pies over there at that time, not the baked monstrosities available over here.

Did you read this article about McD's burgers not rotting?

Wow. I don't know if I feel better or worse about the world.