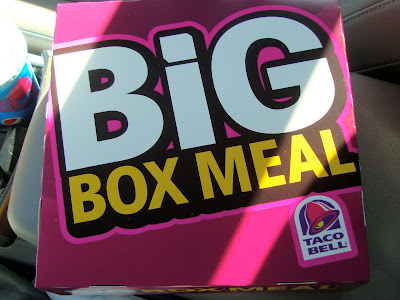 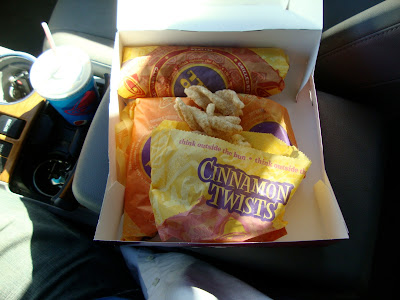 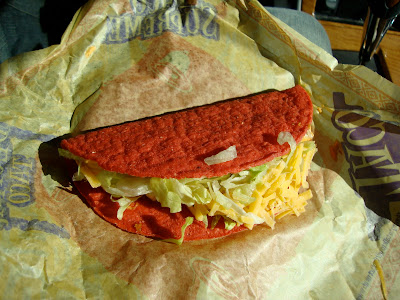 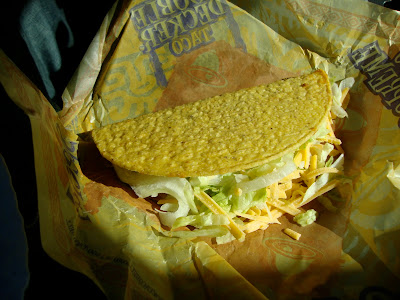 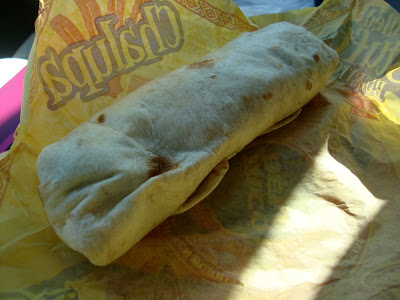 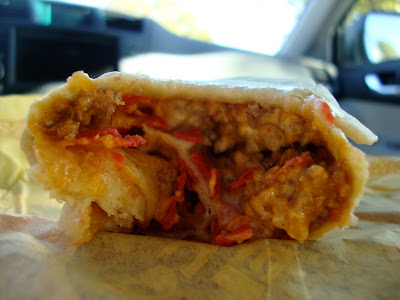 Six weeks ago Taco Bell announced the unveiling of a football-themed box full of food. I did not consider trying it because... well, because it's Taco Bell. Even a football theme doesn't inspire me to try Taco Bell items that I have already eaten. (And I'm the guy who once drove to Burger King at midnight so I could get a Krusty the Clown talking watch.)

The box was released in conjunction with the BCS championship game a month ago, so I just assumed it had disappeared. And I did not shed any tears. But a few days ago I was driving past a Taco Bell with a sign for the box in the window. I was listening to sports talk radio, about the Super Bowl, and I thought Yes, I am in a football mood now. The best part about the box is that it is supposed to have a football field printed on it, with hash marks, so that one can ball up a taco wrapper and play finger-flick-football.

I asked the guy behind the counter if the signs were indeed accurate and they were still offering the box. He said they were. It was then that I noticed something curious about it: it's called the "Touchdown $5 Buck Box." Are both the dollar sign and word "buck" necessary? Shouldn't it be the "Touchdown $5 Box" or the Touchdown 5 Buck Box"?

"I will have the Touchdown Five Dollar Buck Box" I announced.

A few minutes later I took it out of the bag and my heart sank. Well, not really, but the box was just a bland box reading "Big Box Meal." What the hell? There was no football field. There were no hash marks. It's just a box that turns into... a box.

So I turned my attention to the food. The Not-Touchdown Five Dollar Buck Box, in the "Volcano" version that I ordered, comes with five things: a Volcano Taco, a Volcano Burrito, a Crunchy Taco, Cinnamon Twists, and a medium drink.

I selected a Diet Pepsi; I didn't want this meal to be unhealthy.

The first thing I did was discard the cinnamon twists. I don't believe there is any occasion in which I would eat these. The regular taco is something I have not had from Taco Bell since I was a teenager. It was every bit as greasy - and yet still bland - as I remember them being. Even when I sluiced the taco with Taco Bell's roasted pepper hot sauce (which I love) it still was not any good.

I like the Volcano taco and burrito. They both lack much substance and together they weigh in at 1020 calories, a ridiculous amount even by fast food standards, but I like the spicy flavor of the "hot lava" sauce.

I considered going back in and pointing out that this was not a Touchdown box and that I couldn't play finger-flick-football. I didn't necessarily want my money back but I thought the manager could at least sit down at one of the tables and play a game with me. We could have used hot sauce packets as hash marks and gotten a pretty good game going. I would have let him go first and everything. I figured I was owed that after their deception.

But then I realized I didn't really care. Football season is over and this was simply the final reminder.
Posted by JustinM at 10:23 AM

1020 calories?! Even I'm surprised at that number!

Yeah, if you eat all four things it's 1360 calories. But see, I tricked The Man... I didn't eat the cinnamon twists, so it was only 1190 calories, and then I was going to play flick football for at least 5 minutes, which probably would have burned about 900 calories. So this would have been a healthy meal.

I've got a piece of green felt, scissors and a stub of chalk - just sayin'.

PP you listen to sports talk radio? oh for shame.

I would be much more ashamed to be listening to any of the music currently on the airwaves.