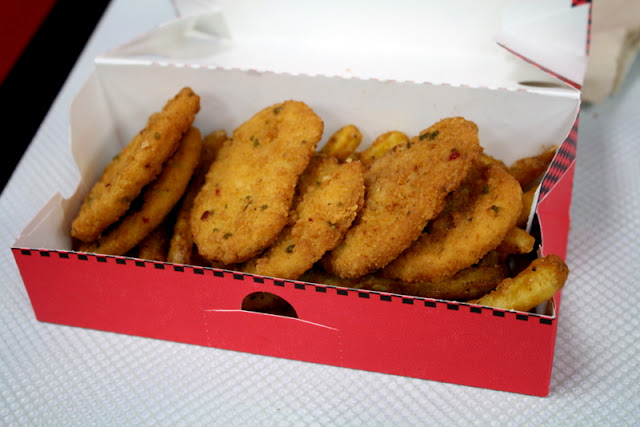 I've never been to a Checkers (or Rally's, another name for it). Over the years, people have suggested I try their boneless wings, which sounded good, or their burgers, which didn't. But I never got around to it.

A couple of weeks ago I saw that Popeyes had brought back their Dip'n Chick'n, a product I liked last year when I tried it. But as I wrote in June, I am done with Popeyes. I am fed up with them not having the dipping sauces they promise, and on that occasion, the girl working there flat-out lied to me.

Then a few days later I read that Checkers was coming out with its own take: "Chicken Dippers." The commercial promised a box of dippable chicken and fries for $2. Though the ad stated that "prices may vary," which means with 100% certainty it would would be higher at the Checkers by me in Brooklyn.

So I went to check it out. The price was $3, which seemed reasonable, and I stood in line for ten minutes while a woman at the head of the line was having many issues. I won't go into details but let's just say I was getting annoyed, so I left. Oh well, I thought. It's not like this is the one thing my life has been missing.

But later in the day it turned out I had to be in Manhattan for something, less than one mile away from a different Checkers. Why not? I went there, where I was able to place my order within 30 seconds. The food was ready less than five minutes later.

"What kind of dipping sauce do you have?" I asked the girl handing me the food.

"It's already in there," she replied.

"Okay," I said, and sat down. I opened the box and found the above picture. No dipping sauce. I can't win. I looked back at the counter: there were quite a few people gathered around, and a long line had grown at the register. I decided to just try one as is.

It was the saltiest chicken I have ever tried. Wendy's chicken, which in the last couple years has become almost inedible to me, has got nothing on these. These definitely needed to be eaten with a sauce to counteract the saltiness. "Screw this," I said. I put the rest of the box in my bag and went home. I have plenty of dipping sauces there. 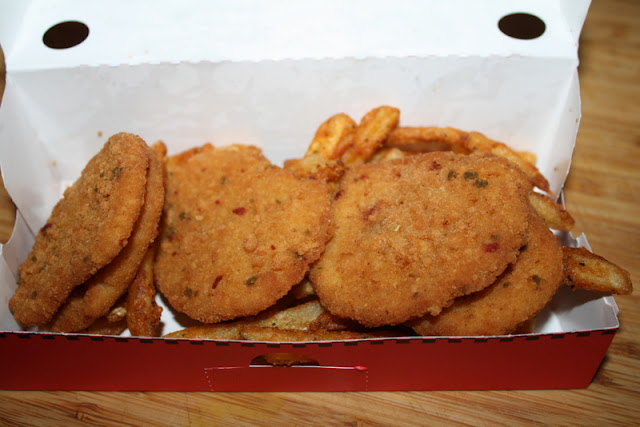 Fifteen minutes later I was back at home and I took another picture of the chicken dippers. 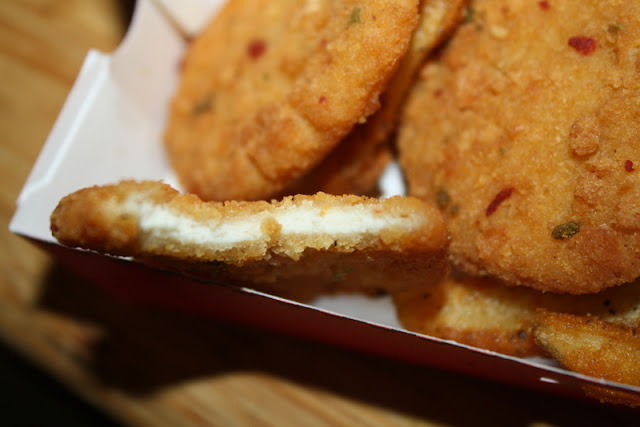 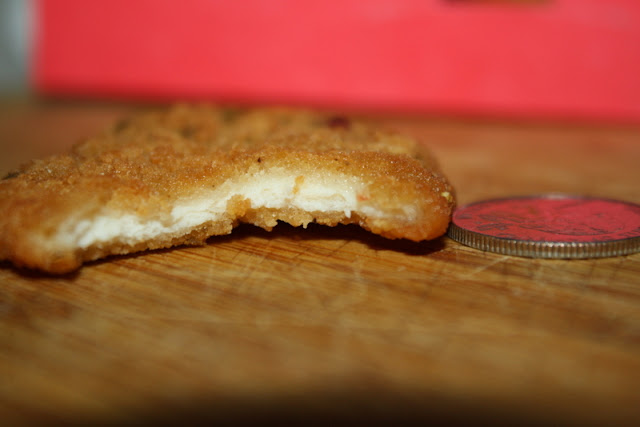 In addition to being the saltiest chicken I have ever tried, it is also the thinnest. Three stacked quarters would rise above these chicken pieces. 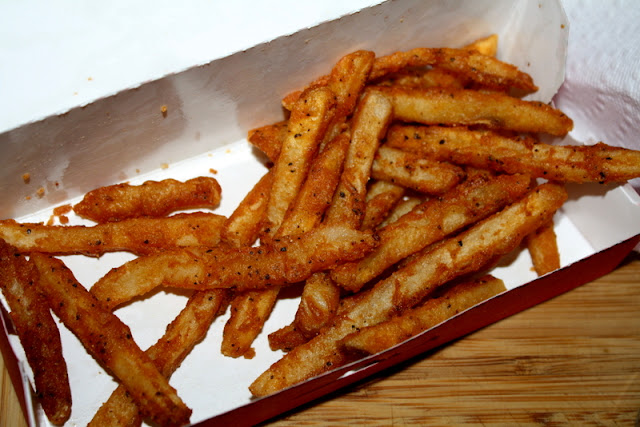 The fries are seasoned fries, which are my least favorite kind of fries by far. But I knew going in that's what they were going to be, so I have no complaints. 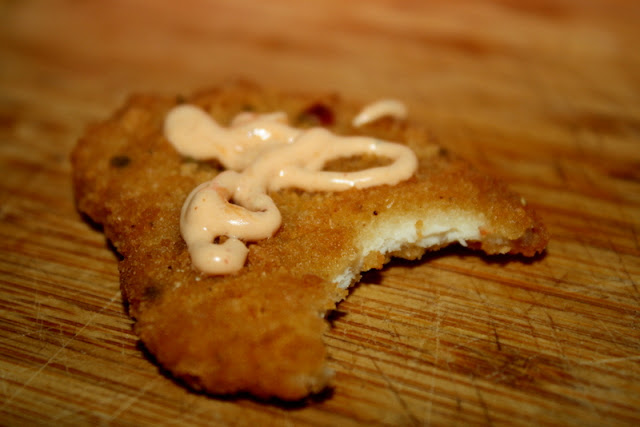 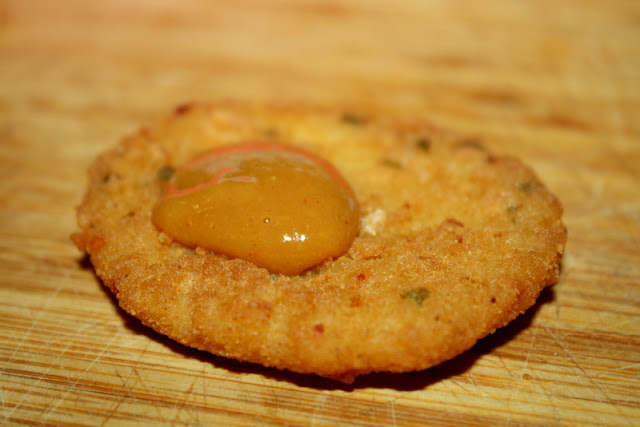 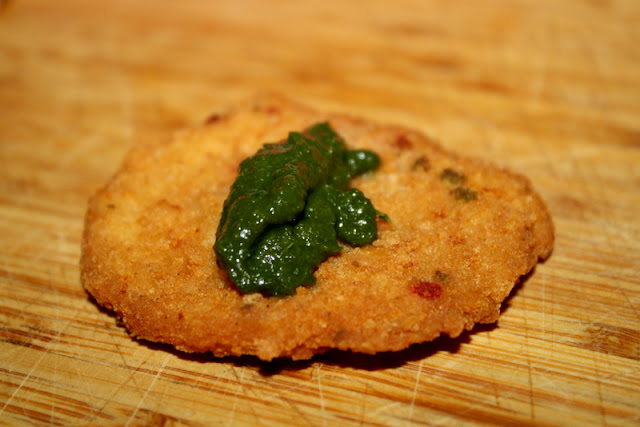 This Indian cilantro chutney was the worst choice with which to pair the chicken: it was salty, too, which made this terrible. I drank a 20-ounce bottle of water in two drinks after eating this one. 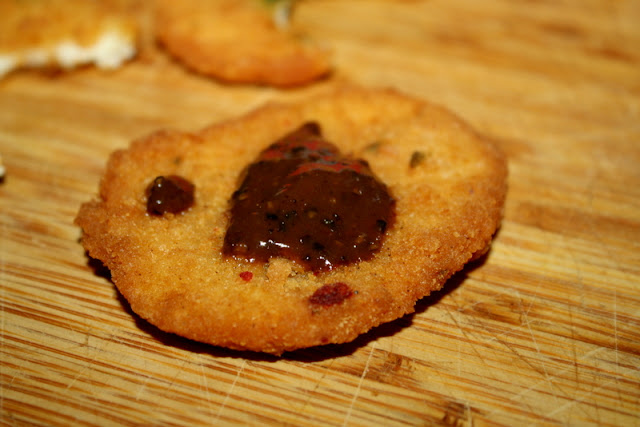 A.1. peppercorn steak sauce was the best complement I tried. Maybe the peppercorns were the exact right choice for such a salty piece of chicken? 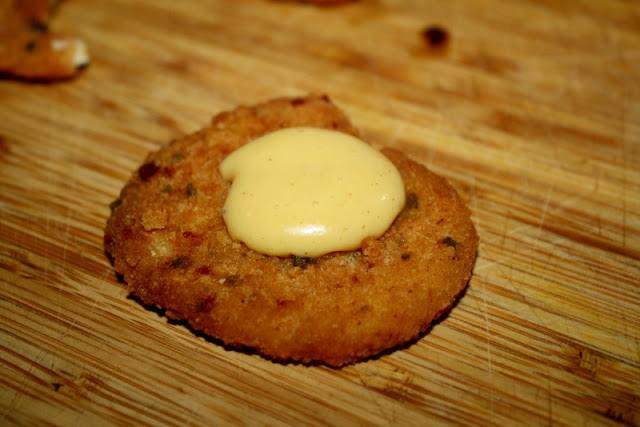 Ken's Steakhouse "Light Honey Mustard" was right in the middle. The creaminess and sweetness of the sauce was better than the cliantro or ranchero sauces, but not nearly as good as the A.1. or Sticky Fingers.

It's hard for me to really complain about a box of chicken and fries that costs three bucks. But I didn't think they were very good and there is no way I will ever get them again. I made it more than three decades without eating at a Checkers/Rally's, and if I never eat at one again, I don't think my life will be any worse off.
Posted by JustinM at 10:00 AM

do you consider it a lot of food for $3, pp? sure looks like a good value.

It was a lot of food but it just wasn't good. So no, it's not a good value. They could have given me twice as much and it still wouldn't be; who cares if it's not good?

On your first visit to a Rally's, why in God's name would you choose the new cheap processed wonder meat? They consistently have some of my favorite fast food burgers and fries, which I haven't had in years since its a 2 hour drive from where I live now.

I guess you didn't read the post. I went there to try this because it's a new promotion.