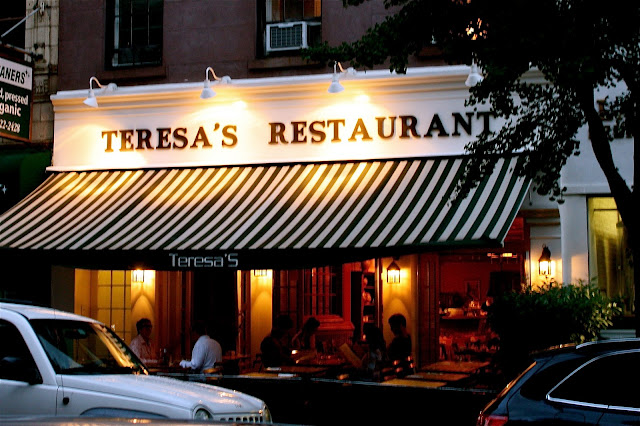 Back in the summer of 2010, I first wrote about Teresa's. We were in Brooklyn on vacation and, after having heard for more than two years how great the potato pancakes are at Teresa's, I was eager to try them. They underwhelmed me. They were good, sure, but a little on the flabby side. No better than the Trader Joe's potato pancakes I make at home, and certainly not the best I've ever had. But that's how it sometimes goes when you're told for so long how great something is. Expectations are a bitch. (I will always remember the night for a different gustatory reason: it was the night I first met the Kustard King.)

So I left liking the place, but not thinking it was anything too special. Fast forward more than two years to this late summer, a cool day when potato pancakes sounded really good. They deserved another try, so we went to Teresa's. It was drizzling and we opted to sit inside, rather than the patio. 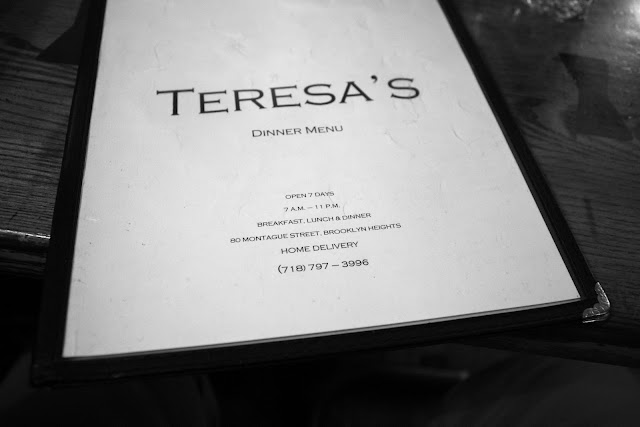 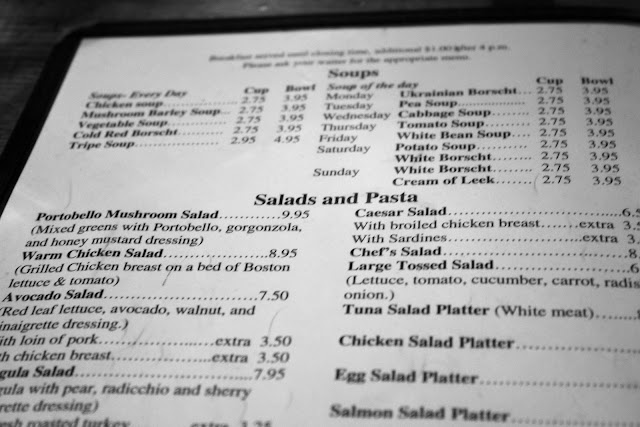 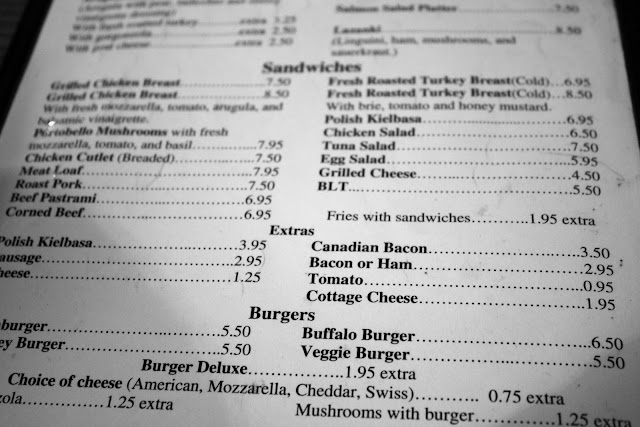 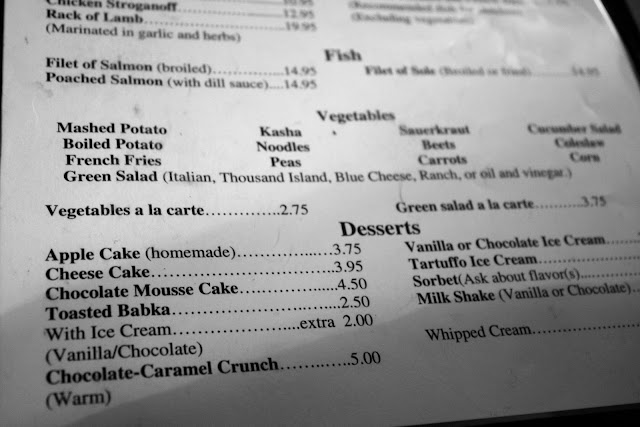 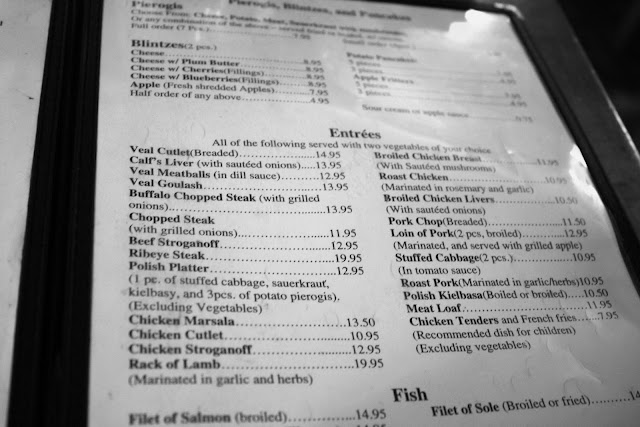 The photos I took of Teresa's menu were all bathed in a weird light that annoys me to look at, so I made them black & white. The menu contains a lot of traditional Polish favorites, as well as some diner classics. 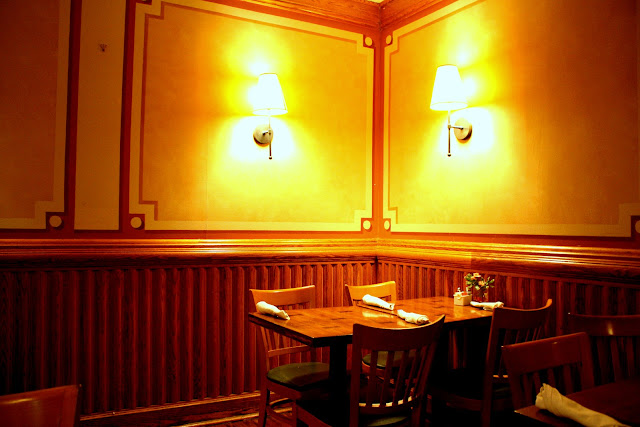 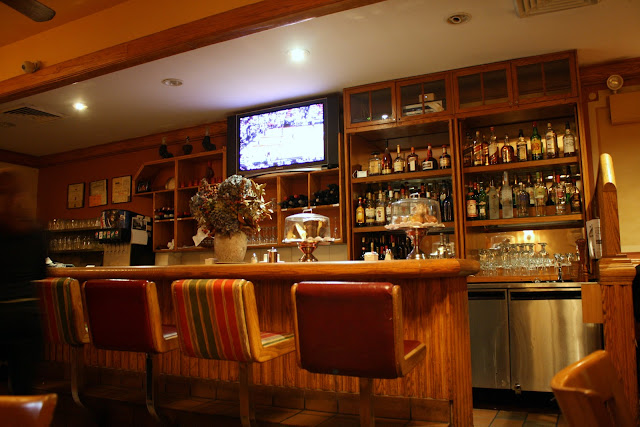 And the interior of the restaurant looks kind of like a diner, or at least a very casual family restaurant. The service was very poor, though I think that was just our clueless waitress and not a reflection of the restaurant overall. (I noticed servers at other tables and they all appeared much more competent than the girl serving us; I could tell several stories but my favorite was when our entrees arrived and rather than walk four feet to my side of the table she handed mine to Elizabeth and commanded her to "pass that down.") 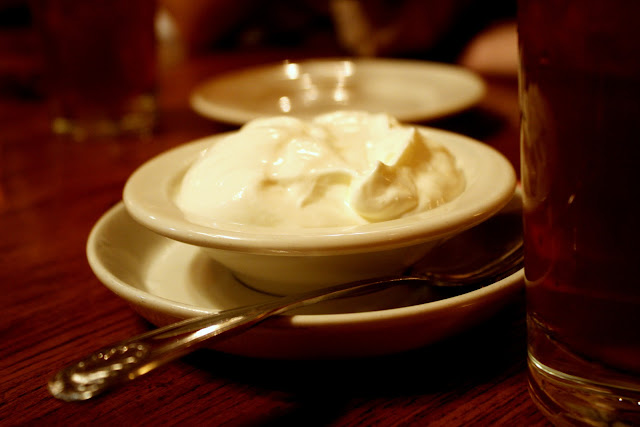 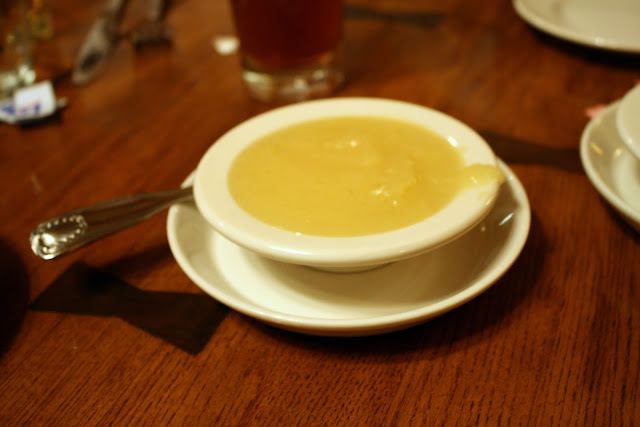 Do you like applesauce or sour cream with your potato pancakes? To be honest, neither would be one of my top choices. I like mustard. (Actually, I like A.1. cracked peppercorn steak sauce, but I've yet to see that at a restaurant.) But if I have to choose between the two, I'll take sour cream. 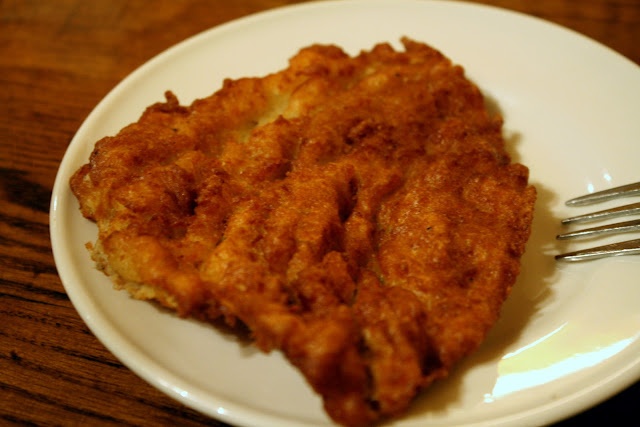 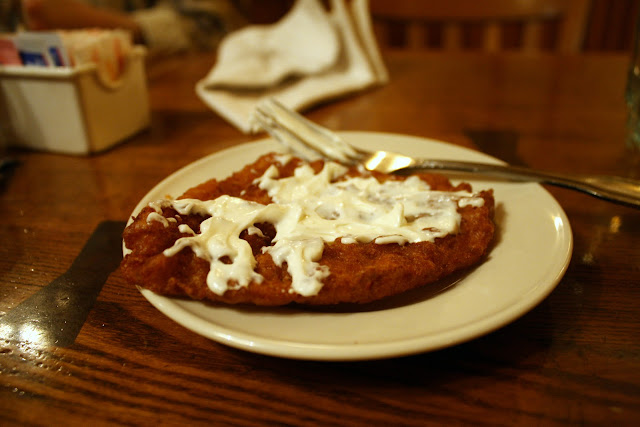 Now these were the potato pancakes that I'd been hoping to receive last time. Golden brown, crispy on the outside, fluffy inside. These might very well be the best latkes I have ever had.

"Are these better than last time?" Elizabeth asked.

"Much better," I replied. 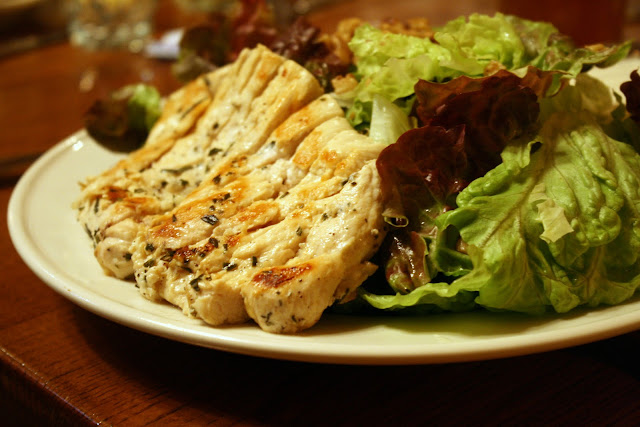 She had a salad with a grilled piece of chicken, and she really liked it. I didn't try any. 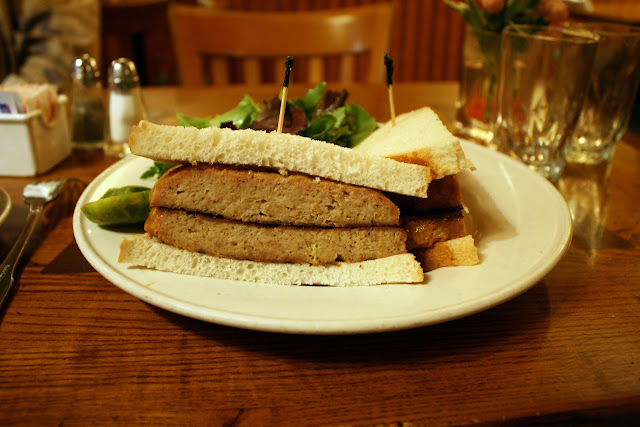 I went with the meatloaf sandwich. At first bite it tasted a little bland, but with some ketchup and black pepper it livened up considerably. I really enjoyed it on the white bread and appreciated the two pieces piled together. 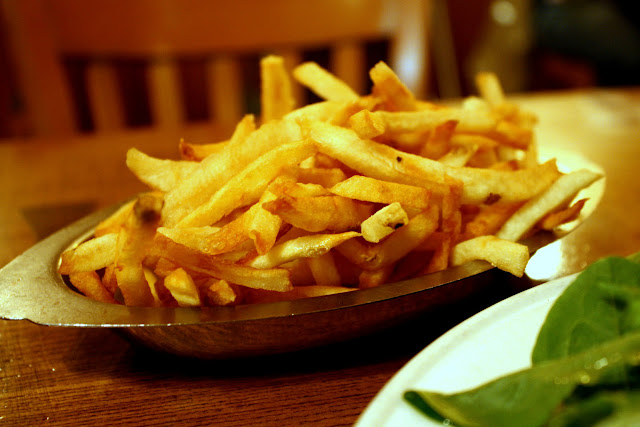 I also got an order of fries because, you know, the potato pancakes weren't enough fried potato to satisfy me. And I'm glad I did because these fries were an unexpected surprise: they were fantastic. They were very crispy but not at all overcooked. Imagine very thin Belgian fries. These are probably the third-best fries I have had in New York, behind Pommes Frites and the rosemary fries at Strong Place.

I will certainly return to Teresa's. It may only be to get fried potato items, but I see nothing wrong with that.
Posted by JustinM at 10:00 AM

I'm so glad to see that you are all okay. Now go make me a sandwich.

Love potato pancakes - and I agree, they would be delicious with mustard. You should be packing!

Packing for what? I'm going to California in two weeks but not going anywhere til then!

Can you do a whole entry in black & white? I love the way it looks.

I wasn't expecting to see you today. Clearly you have power and made it through the storm.

Love how under Vegetables they have french fries and noodles. :)

Michelle: Yes, sure, however I will have to choose one where I don't think color matters.

Bekah: We never lost power. Cable and internet went out for about 8 hours - as I emailed some friends yesterday, Time Warner is terrible even in perfect weather, so I was fully expecting that to happen - but compared to most places, not much happened here other than downed tree limbs.

I didn't expect to see a post today, either. Glad all is well! Were you not afraid before it came onshore? That would have flipped me out.

No, not afraid in the slightest. I realize how that comes across, but that's the direct answer. We were not in an evacuation zone and I was more than prepared to stay indoors without power for at least five days. An ounce of prevention, you know...

I like those bar stools. I would sit there and eat cake and Kahlua.