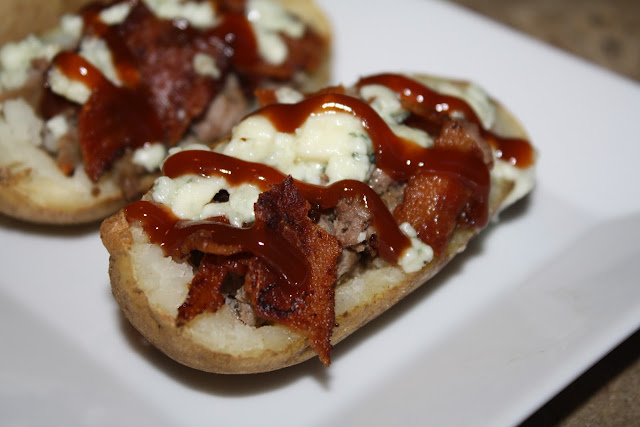 For the first two decades of my life, potato skins held little interest for me. Sour cream and chives were not things I enjoyed. While I liked potatoes of the deep-fried variety, baked potatoes were just sort of blah. The only potato skins I ever remember enjoying were from Tony Roma's, and frankly that's just because they served as an efficient vehicle for delivering Tony Roma's barbecue sauces to my mouth. (I can't stand sweet barbecue sauces these days, but back when Tony Roma's was my favorite restaurant - when I was 11 and 12 - their sickly sweet sauces were my favorite in the world.)

And then, when I was 20, I first ate at Wood Ranch and discovered their barbecue chicken potato skins. They were something of a revelation: it had not occured to me that the things I loved on pizza, like chicken, cilantro and red onion, would work in potato skins.

On Saturday, watching some games in the afternoon and thinking about what to make for dinner during the UCLA game, I felt a craving for potato skins. But I wasn't in a BBQ chicken mood. It was too late in the day to slow cook anything. And then it hit me: cheeseburger potato skins. After a couple of minutes of thinking about what kind of cheeseburger I was in the mood for, I decided on a steakhouse-style burger. 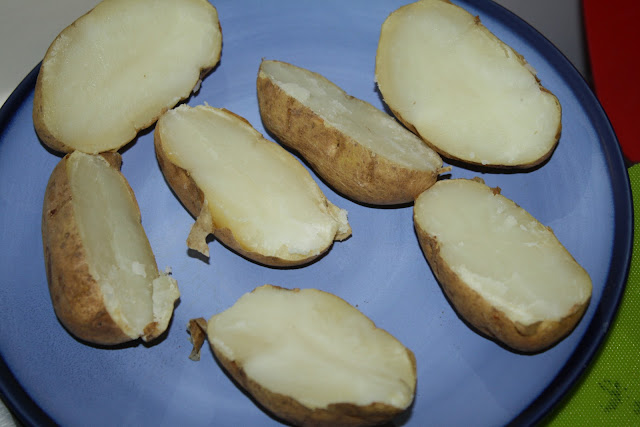 I baked four potatoes in the oven at 350 degrees for one hour. You can certainly cook them for longer; really I just wanted them done enough so that I could scoop out some of the insides without the potatoes falling apart. 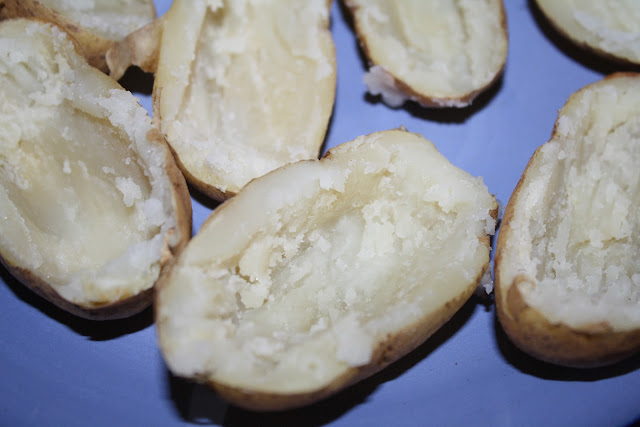 You can choose to remove as much or as little of the potato and you like. I have friends who like all of the potato left inside when I make potato skins. I'm not as big a fan of the flavor, so I try to take out at least two-thirds. 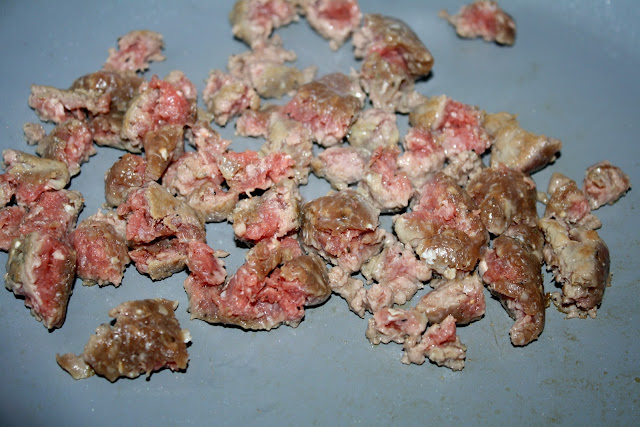 I bought one of the brisket & short rib patties from Paisanos and broke it up in the pan as I cooked it. Those patties are a little over half a pound, which is a good amount for eight potato halves. 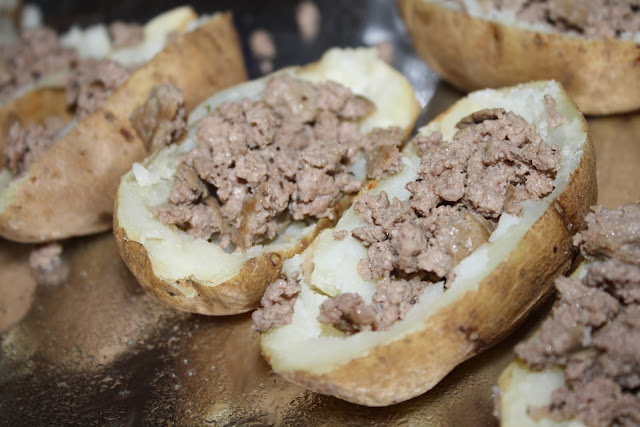 When the meat was done I spooned (actually, to be honest, I just used my fingers) some into each potato skin. 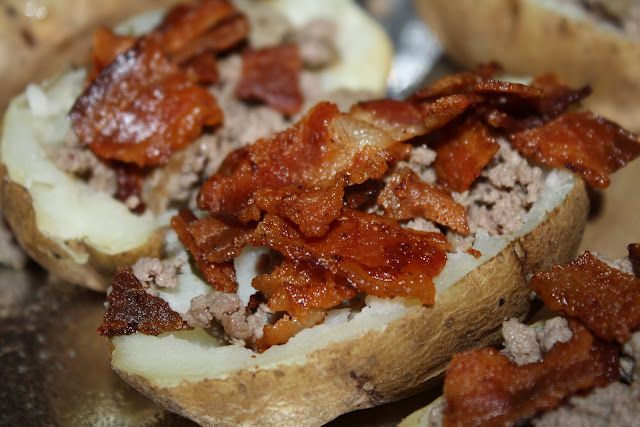 I slowly cooked a few pieces of bacon in a pan until it was crispy, then broke the pieces up and added them on top of the beef. 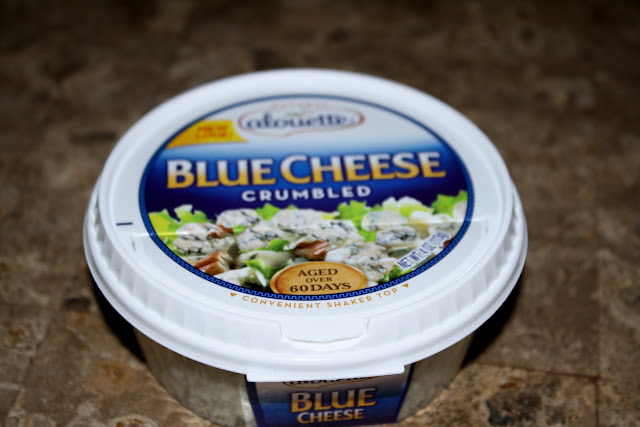 I had some really nice blue cheese in the fridge, but it was in wedge form, so I decided to get some inexpensive crumbled blue. It seemed much easier. 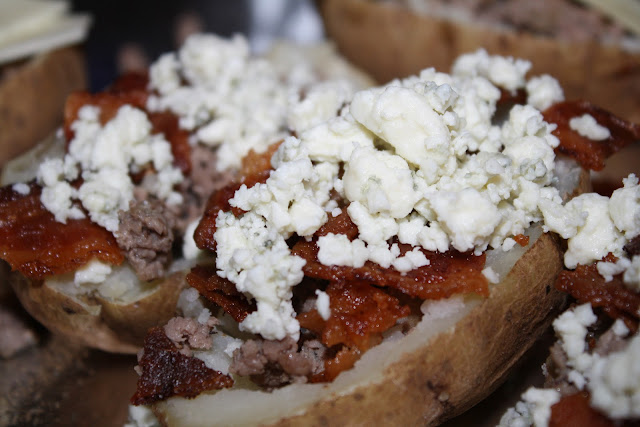 The blue cheese went on top of the beef and bacon and the pan of potato skins went into the oven for ten minutes. 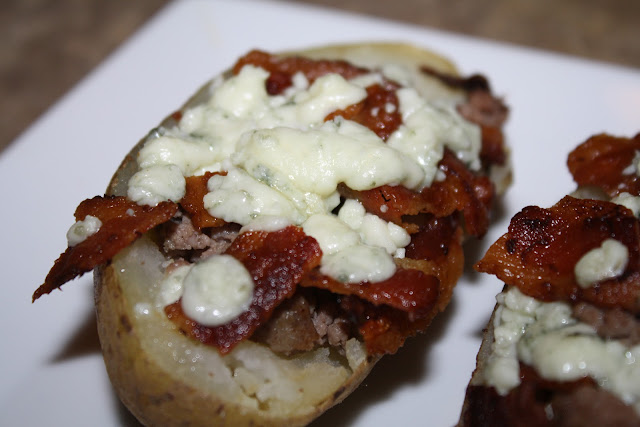 The hardest part was not eating them right away when I removed them from the oven. But I wasn't done just yet. 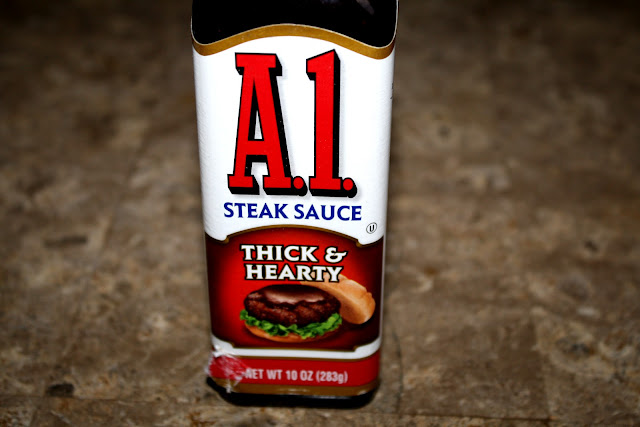 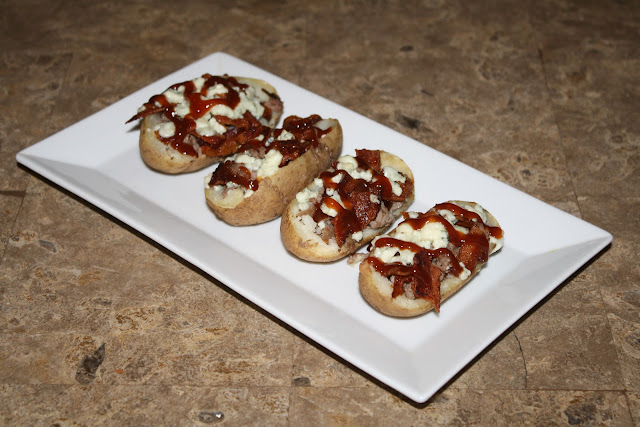 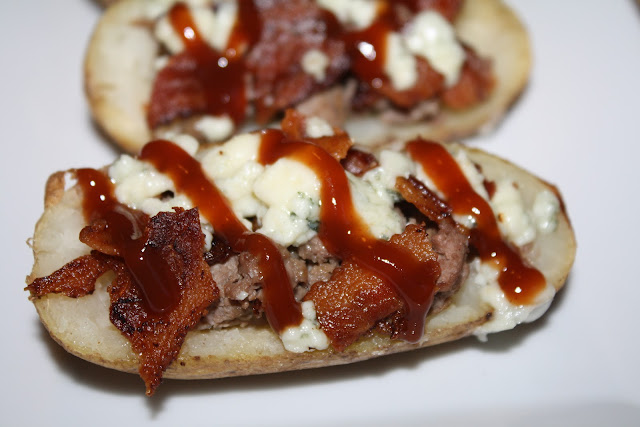 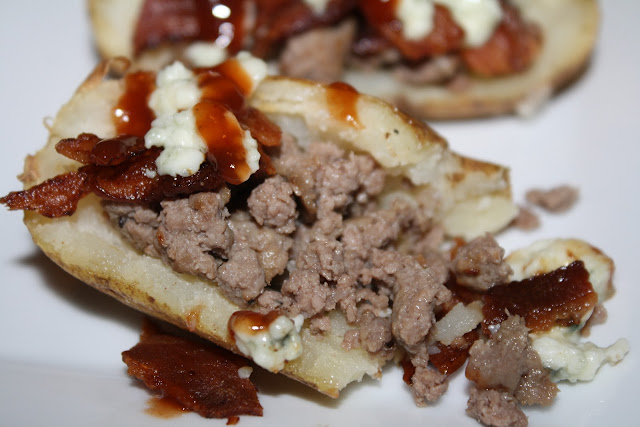 They were fantastic. If I were to make these again I would probably use a little more bacon, breaking it up even more finely and mixing it in with the ground beef, as opposed to just placing it on top... but this is really, really nitpicking here. I mean, short rib, brisket, bacon, blue cheese, steak sauce, and baked potato, all in easy-to-eat-with-one-hand form.

Just as UCLA's ass-kicking of (not very good) Colorado may be their high-water mark this season, these may be the best football eats I make. I'm not sure where to go from here. Maybe I'll just make these potato skins every Saturday from now on. (Just kidding.)
Posted by JustinM at 9:30 AM

great man food - you give me inspiration what to cook for my house full of guys!

Holy Hell those look amazing. I don't really like football but I want to come watch it with you.

You don't find this shit on Pinterest. I've been inspired to do a cheap version since I'm bringing it into the office. Replacing your fancy-meat with some homemade Italian sausage. Thanks bud.

These were definitely tasty. A good snack!