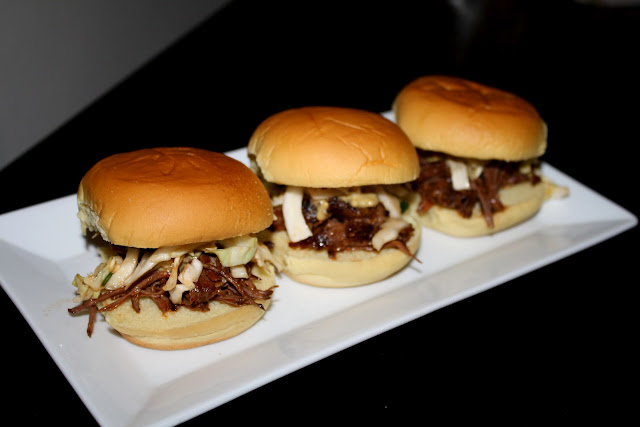 Last week I was at Chelsea Market with my friends Bryce and Amy and their little girl Lucy. We decided to duck into a shop called Lucy's Whey for two reasons: to take a picture of Lucy underneath the sign (she is allergic to whey, which made the picture even funnier) and because the smells were amazing. There were many different kinds of cheese in the shop and afterwards I wished I'd bought some to eat for lunch, instead of what I did end up getting.

And I also saw this: 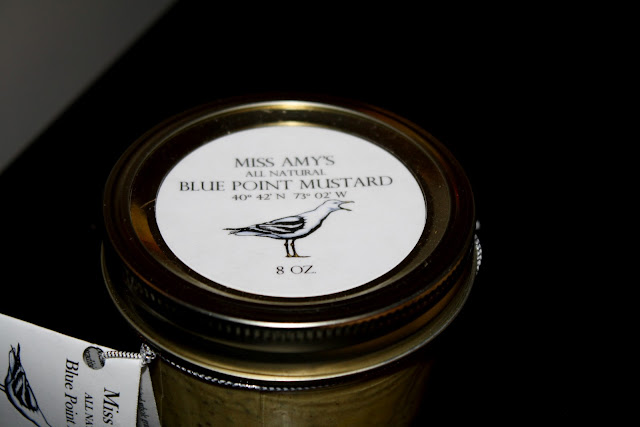 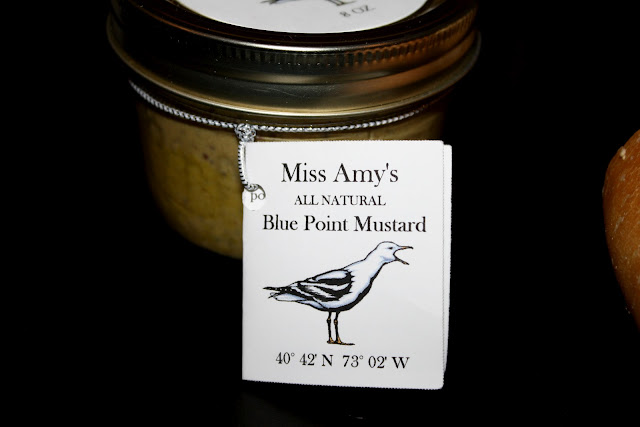 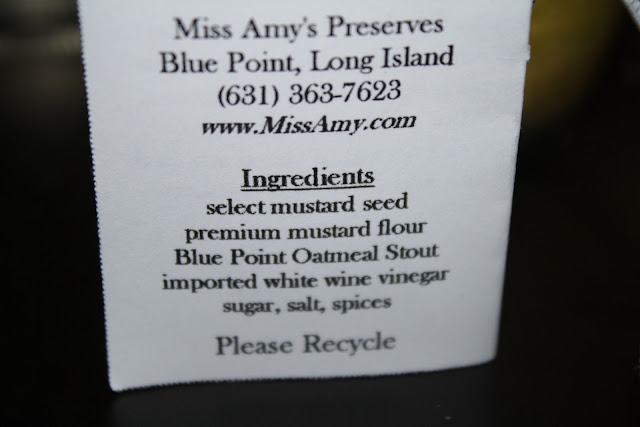 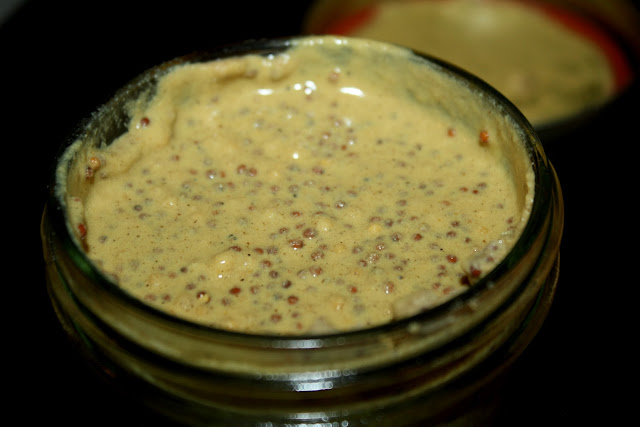 Now, I am a sucker for all kinds of mustard. There have been times in my life when I have had more than 30 varieties in my fridge. I saw Fight Club in Boulder, Colorado on opening night and when the narrator says: "How embarrassing... a house full of condiments and no food," all of my friends turned and looked at me; at that moment my fridge contained 18 bottles of beer and 20 kinds of mustard and nothing else.

So when I saw a mustard made with local beer and using the name Amy while I was with my friend Amy, I had to buy a jar. Sometimes these things choose you. 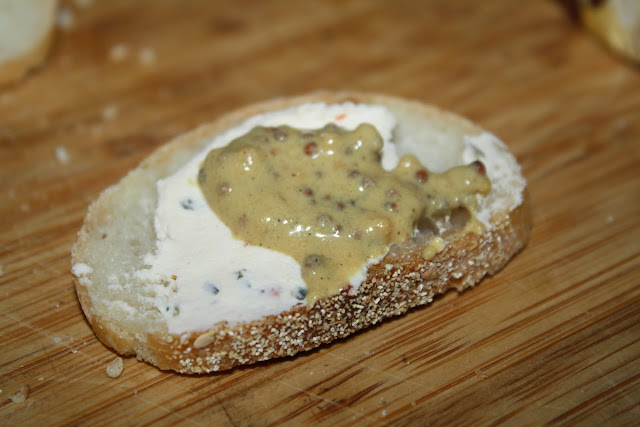 That, night, I tried the mustard on some sliced bread with goat cheese. It was delicious. I decided to use it on whatever football snacks I made Saturday. I started running through ideas in my mind before settling on making some kind of sliders. I decided I would make short rib sliders and, in honor of my friend Amy, make them with a Korean flair. 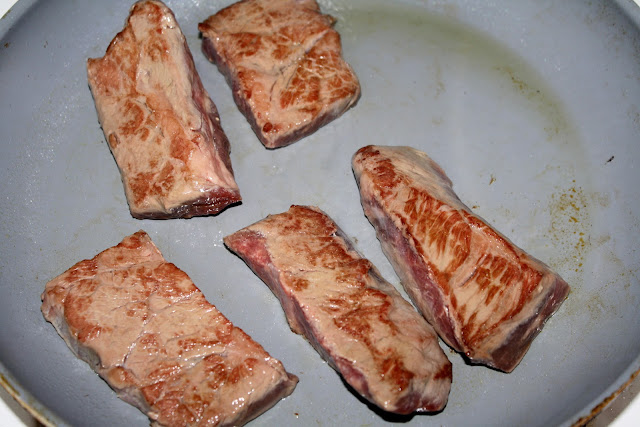 I picked up a pack of boneless short ribs at the market and browned them in a pan for one minute on each side. 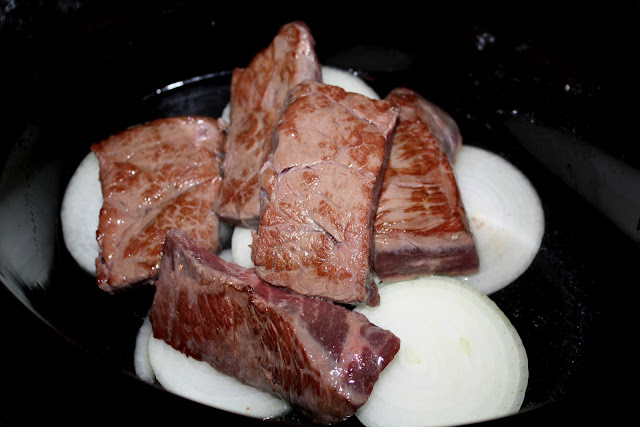 Then they went into the slow cooker, on top of some sliced sweet onions, surrounded by water. 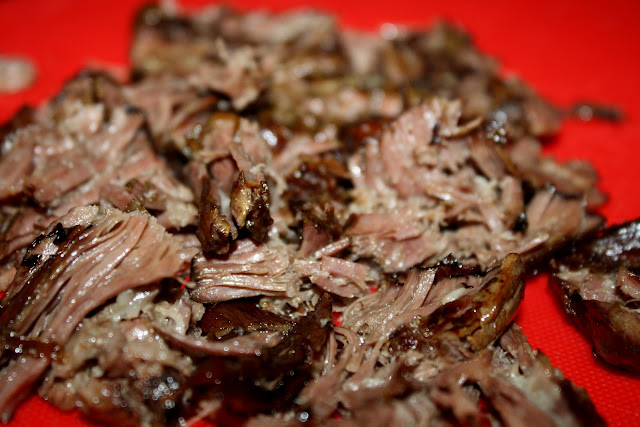 Six hours later I removed the beef. It fell apart with gentle prodding. I wanted to add a sauce to them. What's the first thing you think of when you think of Korean food? 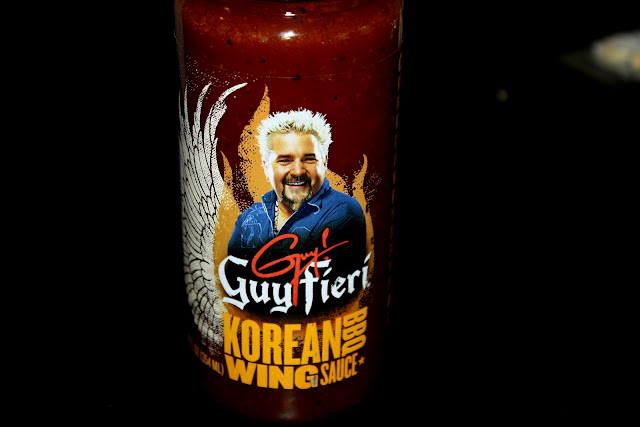 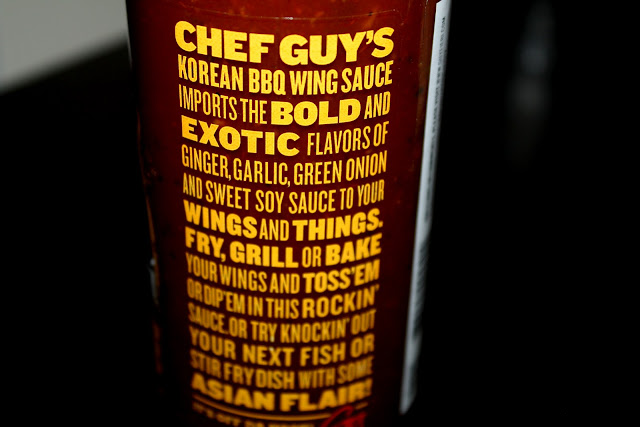 Guy Fieri? Me too. Well, maybe not, but this sauce was on sale at the store and I've had luck with a couple of his other sauces. So why not? 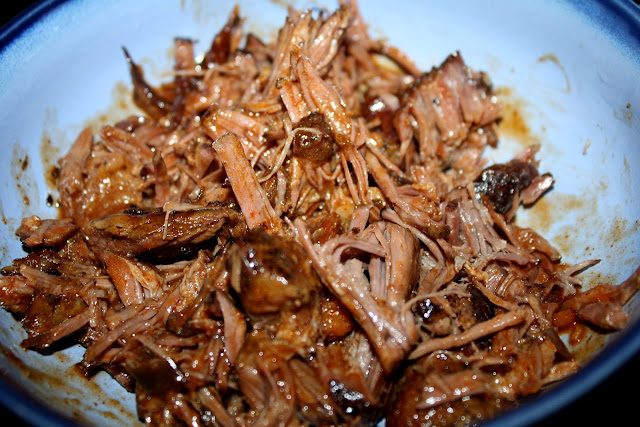 I tossed the beef with a little bit of the sauce. Have you ever had short ribs, or even short rib sliders, at a restaurant, where the short ribs are completely drenched in sauce? All you can taste is the sugary sauce, not the meat at all. (Which may well be the point.) I did not want that here. 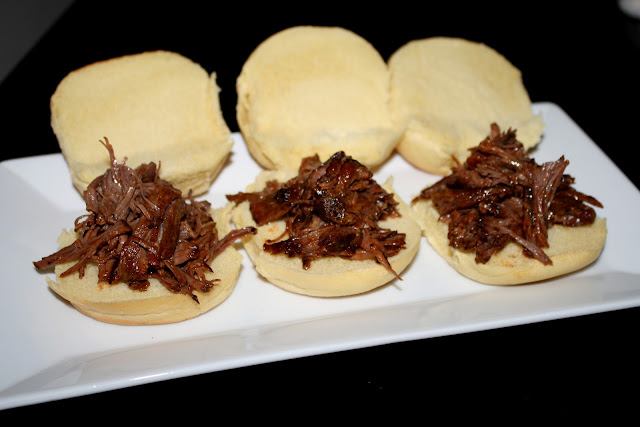 I spooned some of the short ribs onto soft, small, Martin's potato rolls. 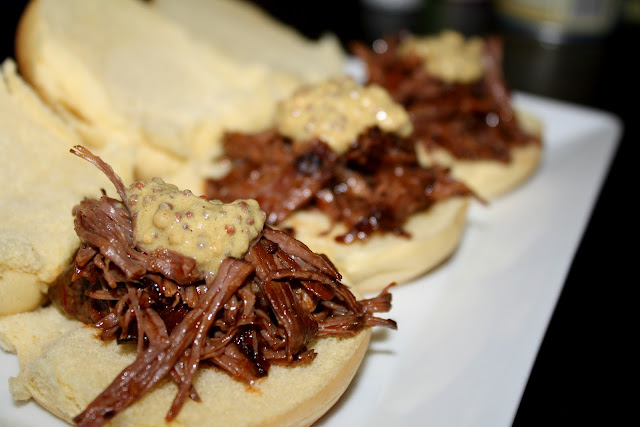 And then a dollop of Miss Amy's mustard went on each.

I wanted some crunch for each slider. The obvious choice would have been kimchi. I love kimchi, but that is some powerful stuff, fragrant enough to overpower anything. And since I'd spent a lot of time slow-cooking the short ribs to juiciness, not to mention I was featuring Miss Amy's mustard, I didn't want to drown out their flavors. I decided to make a slaw with Korean flair. 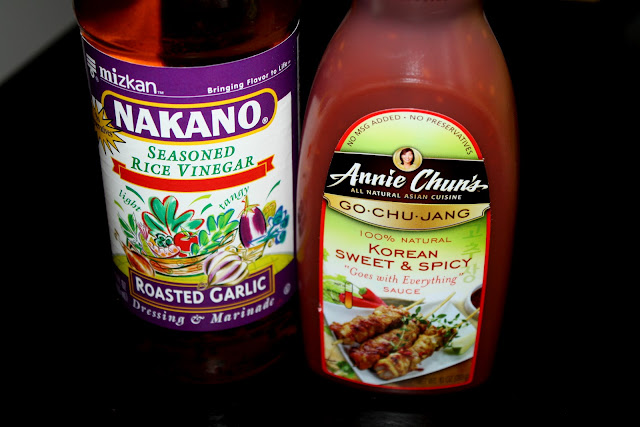 I mixed together rice vinegar and Gochujang, a fermented Korean paste made of soybeans and red chili. I tossed it with shredded cabbage and green onion. 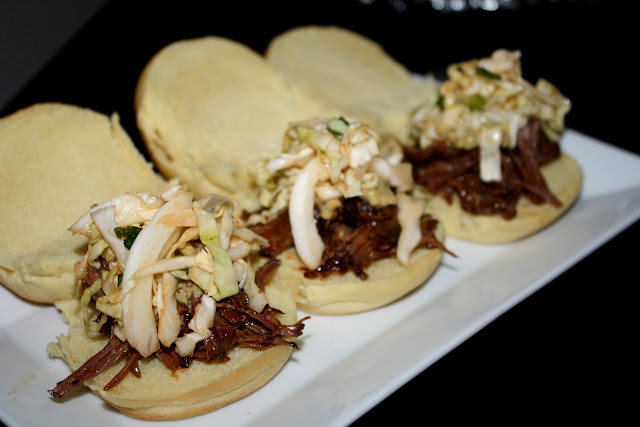 After the slaw had been in the fridge for a few hours it was exactly as I wanted it: softened, but still with plenty of crunch and spice. It went on all the sliders. 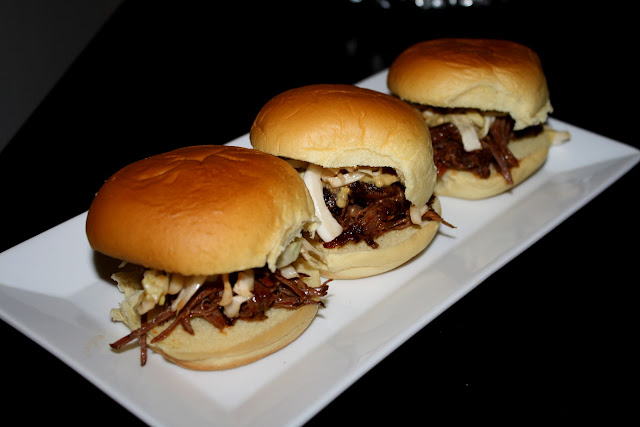 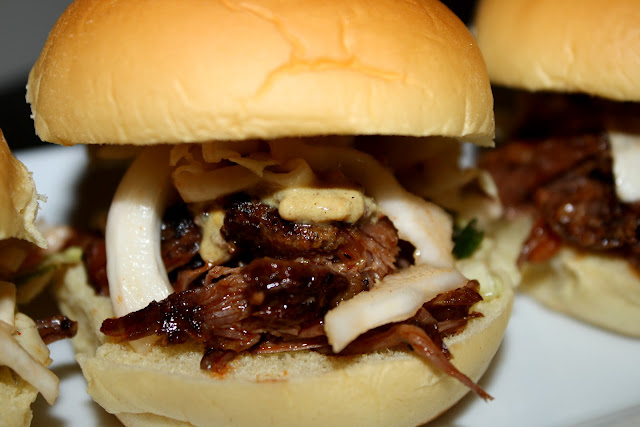 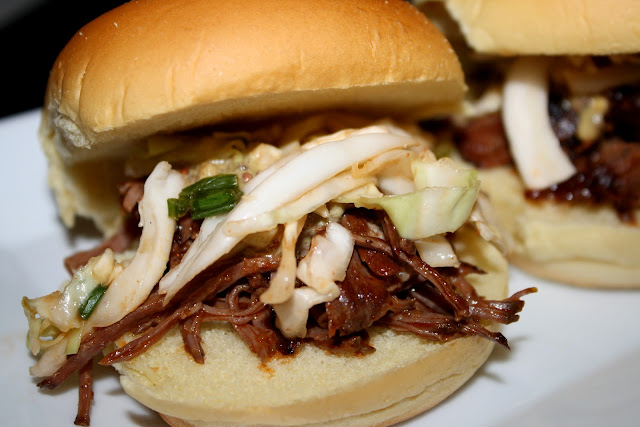 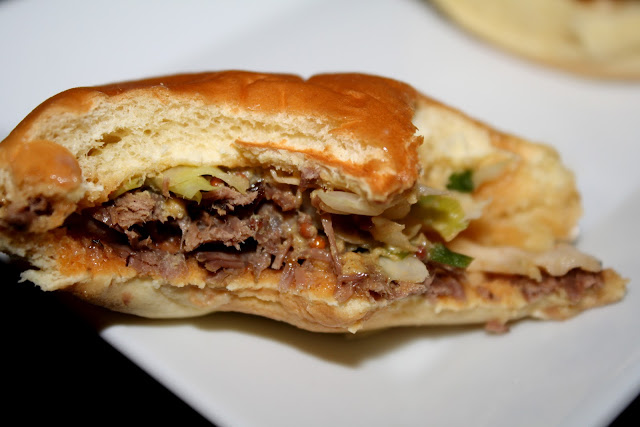 These were definitely the best short rib sliders I have ever made. That's not a very long list - I've probably only attempted them three other times - but this was still the way to go. The mustard was a great counter to the sweetness of the meat and sauce, and the slaw, while standing apart from the rest of the slider, still felt like a great complement.

I've got to think of some more uses for this mustard, it's really good.
Posted by JustinM at 11:00 AM

oh that looks yummy! how funny that you added some korean flavor too!

These look good... you are very good at this type of sandwich. Also, I love when you talk about 'the smells'. I am also in love with Hawkeye. More Hawkeye, please.

i seriously need to come over for dinner.

You are invited for the UCLA-Arizona game if you wear a UofA cheerleader outfit.