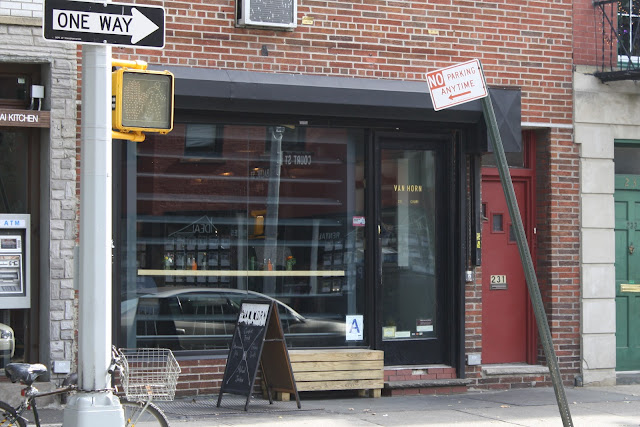 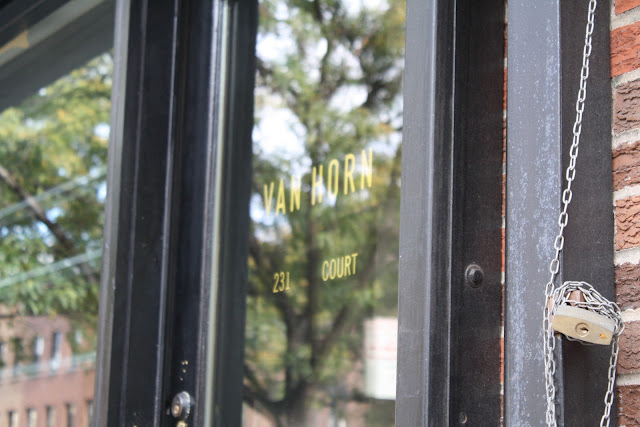 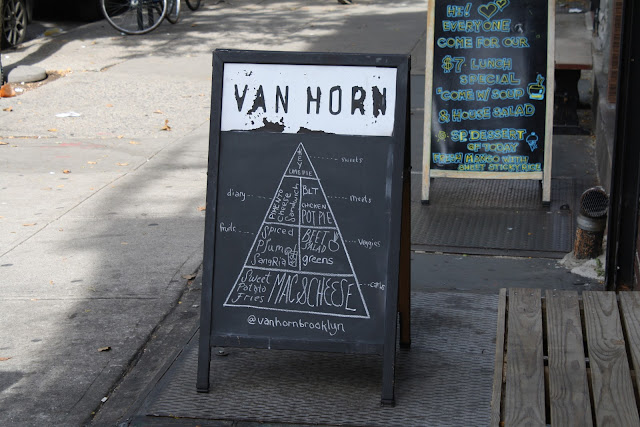 Not long after arriving in Brooklyn - pretty much as soon as the internet was hooked up - I started looking at restaurants in the area. When searching for pulled pork, Van Horn Sandwich Shop came up. The owner is from North Carolina and serves the smoked pork with a vinegar sauce. It sounded great. But, for one reason or another, I never got around to visiting.

Then one warm summer day a couple of months ago, Elizabeth and I were thinking about where to go for lunch. She suggested the sandwich restaurant that I had wanted to visit. It took me a minute to figure out what she meant, but as soon as I did, I said it sounded great. (By this time I had learned that Van Horn gets a lot of their meat from Paisanos and their bread from Caputo's, two of my favorite places in Brooklyn.) 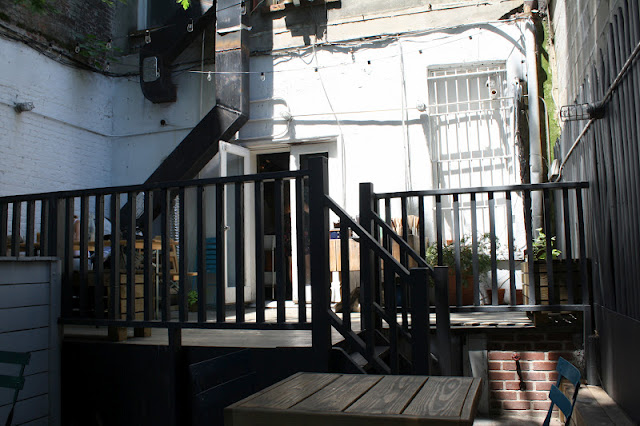 We sat out back in the informal courtyard, as pleasant an outdoor dining space as I have visited in Brooklyn over the last half-year. 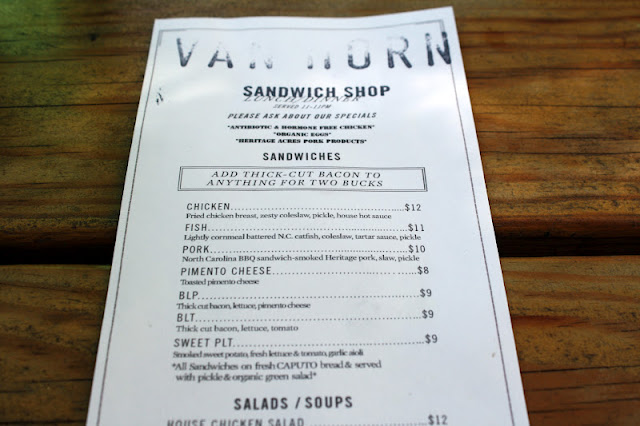 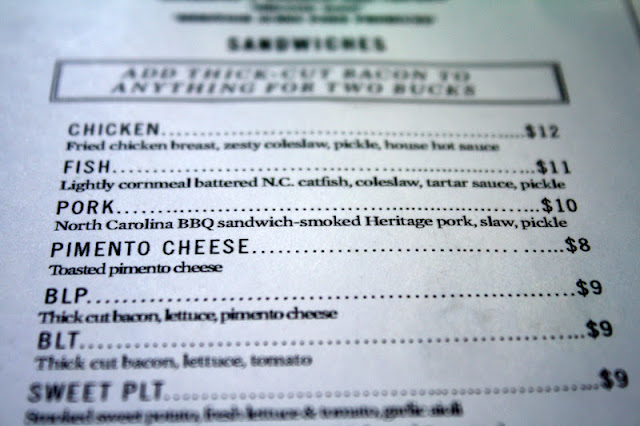 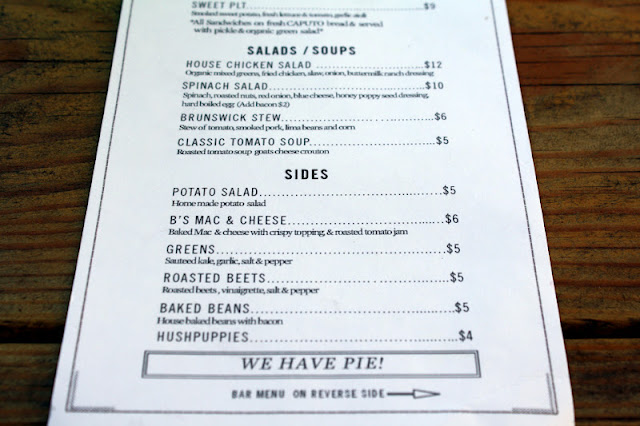 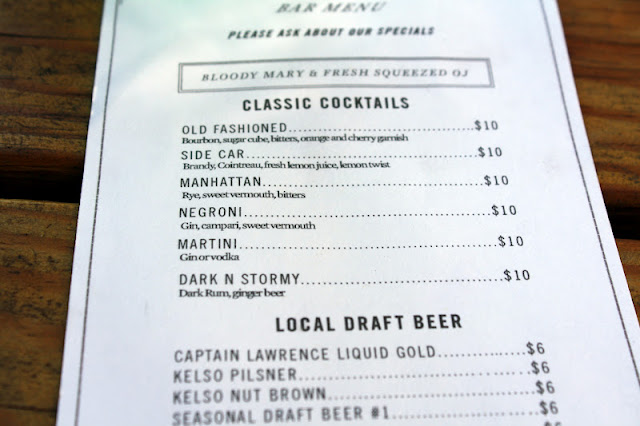 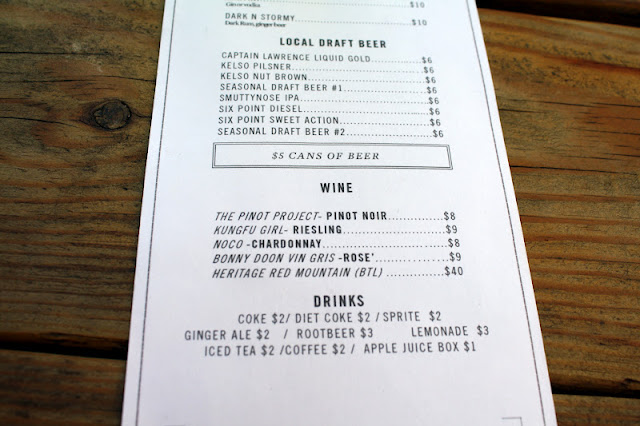 There are tough menu decisions and then there are tough f**king menu decisions. Do I go with the fried chicken sandwich with homemade hot sauce, the cornmeal-battered catfish, or the North Carolina-style pulled pork? (And you gotta love a menu that starts with "ADD THICK CUT BACON TO ANYTHING FOR TWO BUCKS.")  I changed my mind no fewer than six times. If the waitress had arrived to take our order thirty seconds sooner or thirty seconds later, I would have ordered something different than I did, I'm sure. 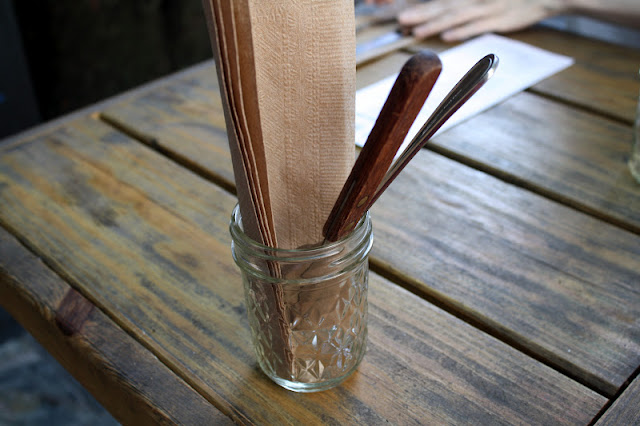 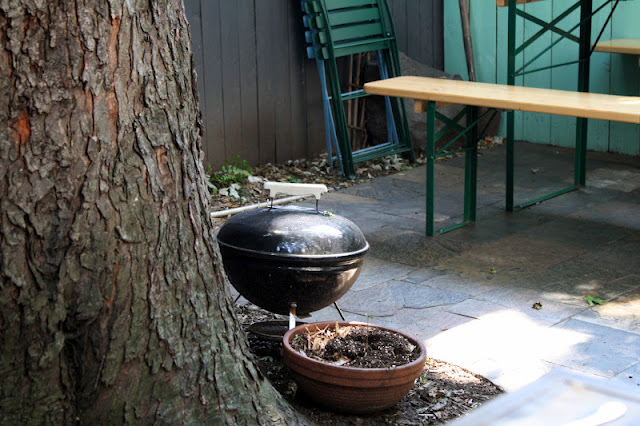 There was a tiny Weber bbq on the ground. This made me very happy, though damn if I can tell you why. 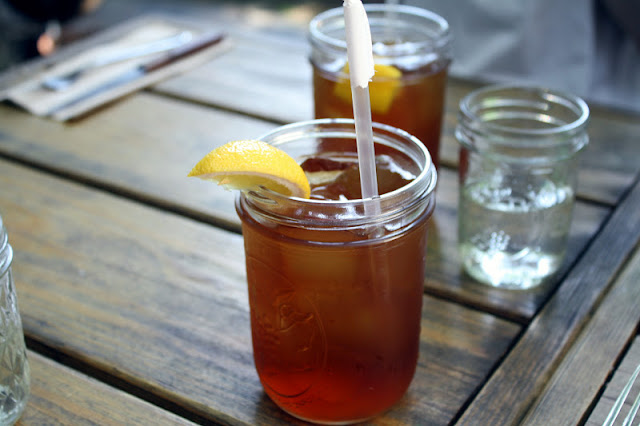 It was an iced tea day, and Van Horn's iced tea was good. The service was outstanding, the waitress constantly filling our glasses and bringing us more ice. 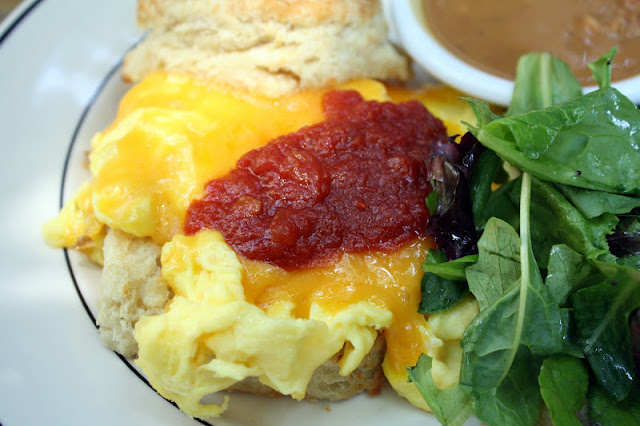 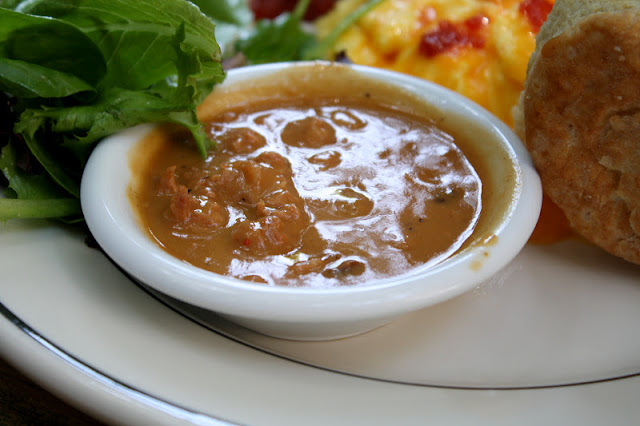 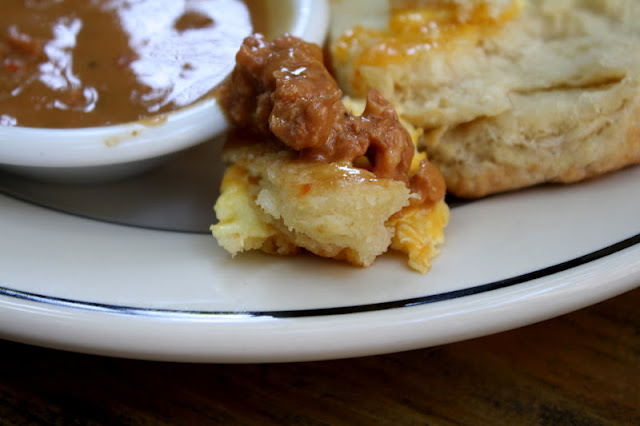 Elizabeth had scrambled eggs with biscuits and sausage gravy. She really liked them but could not finish the plate and gave me a taste. The gravy was great - I considered spooning some of it onto my food. But decided not to. 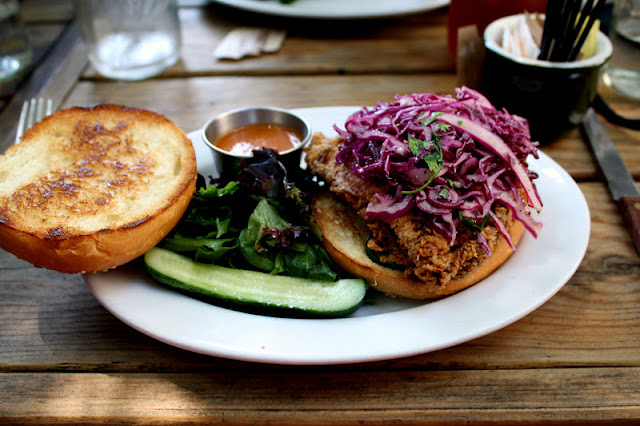 I chose the fried chicken sandwich. It came on a toasted bun with red cabbage slaw, pickles (and another pickle on the side), and house-made hot sauce. 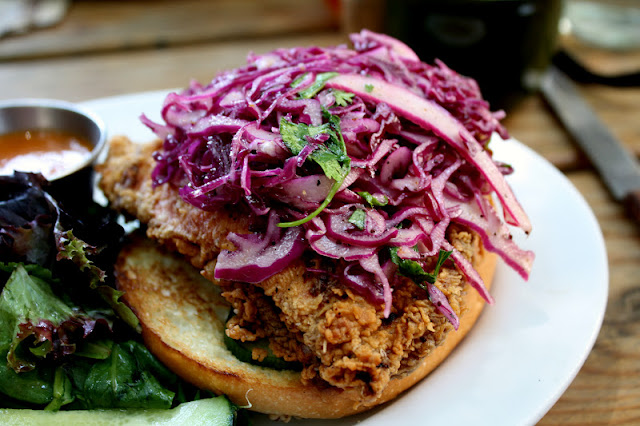 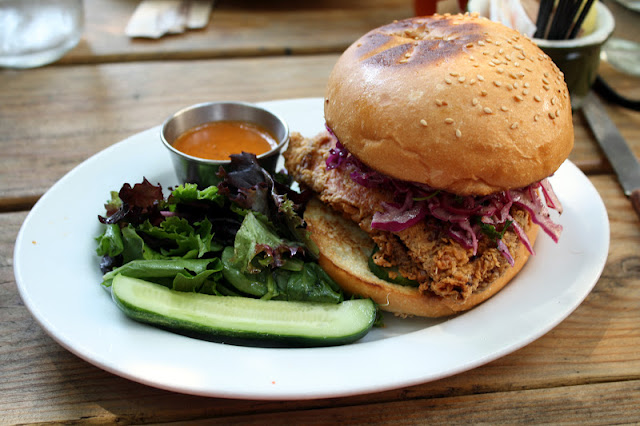 I first tried a bite without the hot sauce. It was good, no doubt, but a little on the dry side. Certainly I would not enjoy this chicken by itself. But between the bread with the slaw and pickles, it was good. If this had been the only way to eat the sandwich, I would have liked it. Fortunately it was not. 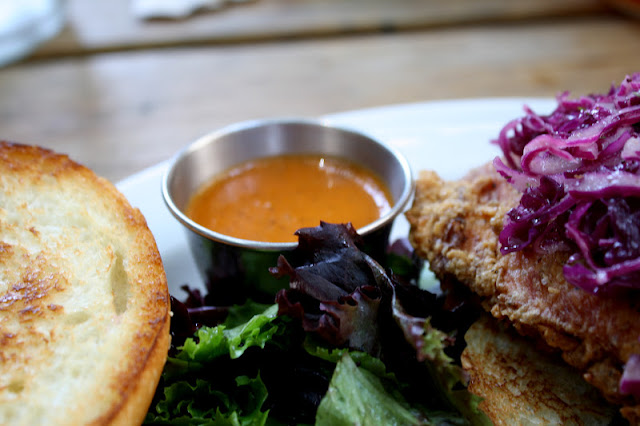 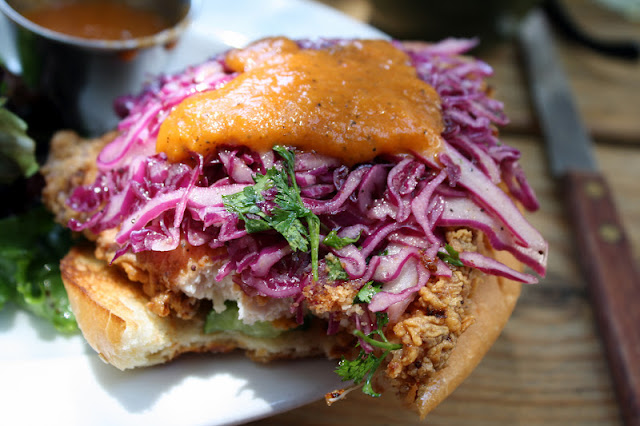 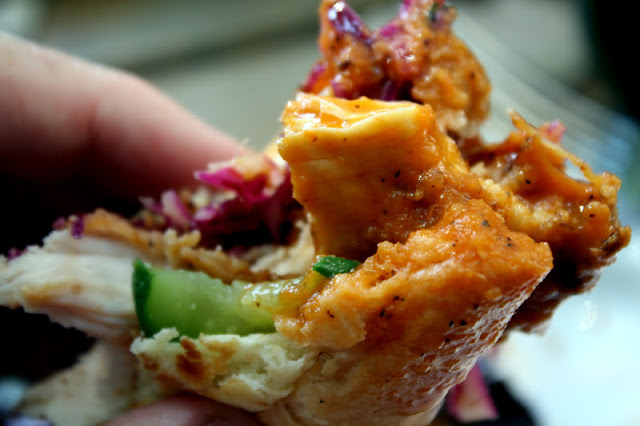 The addition of the hot sauce and the extra pickle transformed the sandwich, even more than I expected. Now it was great. It was one of the best sandwiches I have eaten all year and I probably could have eaten two of them.

I really liked this meal at Van Horn, and I planned my next trip. 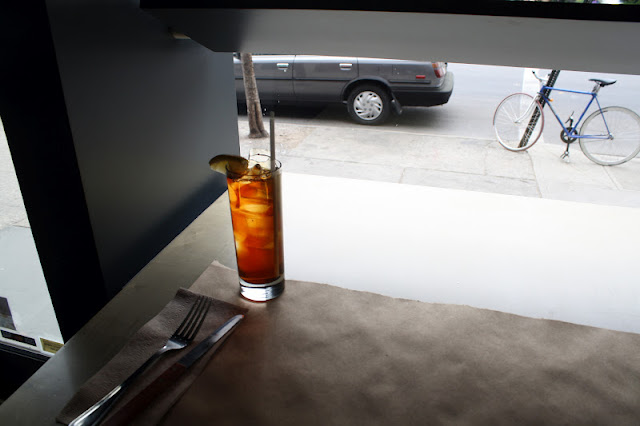 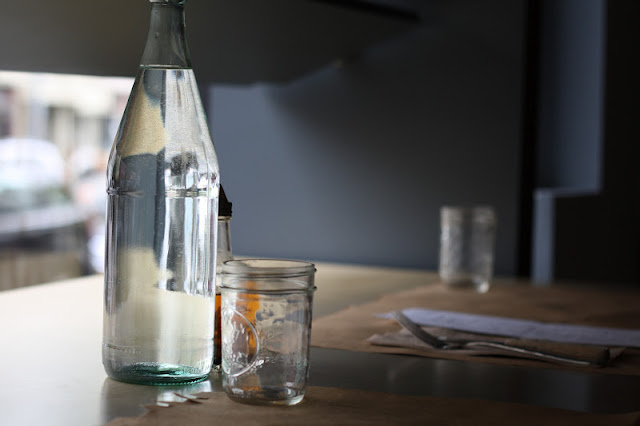 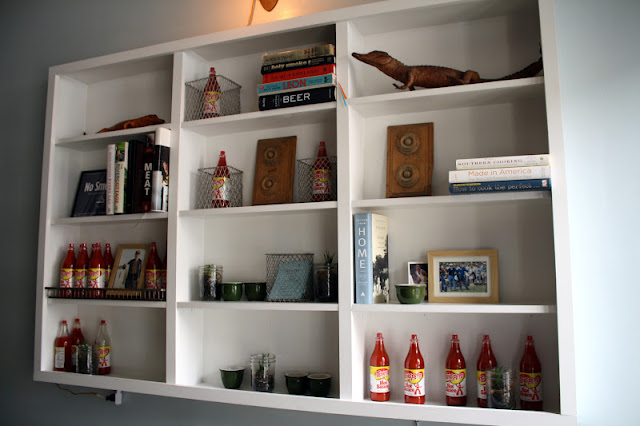 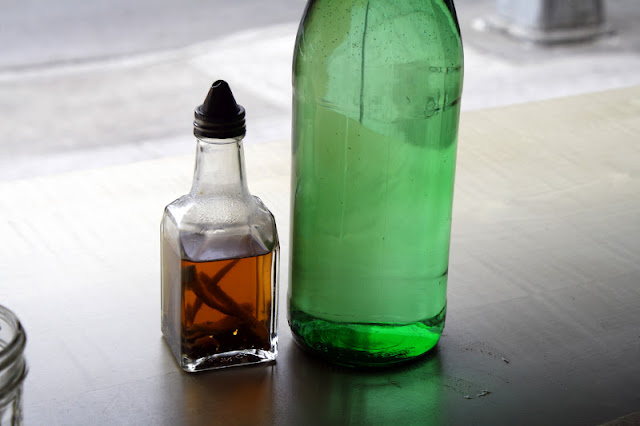 It was a cooler day when I went back by myself, and I opted to sit in the window facing out onto Court Street. I again had an iced tea. It was not refilled even once for me this time, despite the fact I drank it in less than two minutes. This was a different server and she was completely indifferent to my presence. She neither smiled nor asked me how anything was; I saw her when I ordered, received my food, and paid my check. 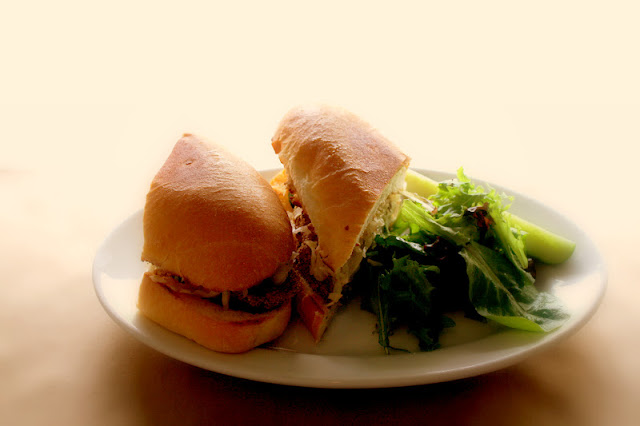 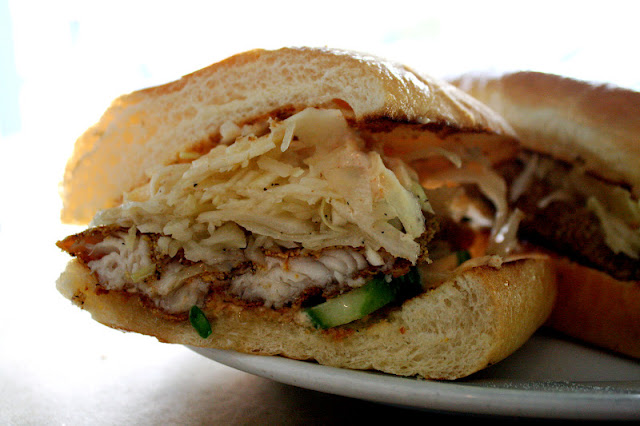 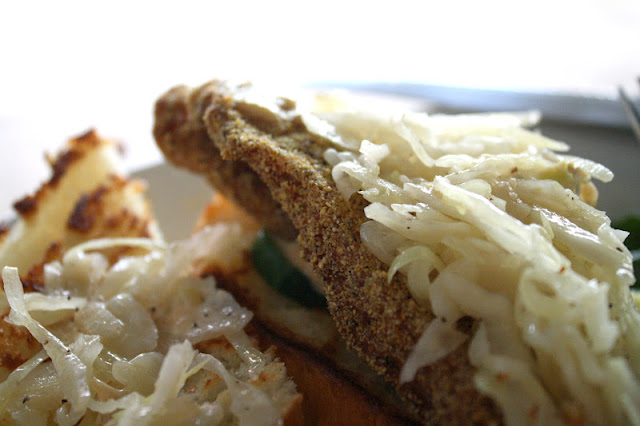 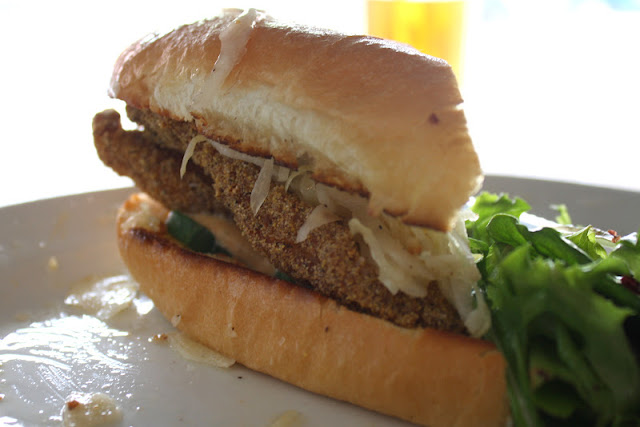 But damn the food was fantastic. I had the catfish sandwich this time - yes, I discovered and wanted to try Van Horn because of the pulled pork sandwich yet I did not order it on either visit - and it was quite possibly the best catfish sandwich I have ever had. It was cornmeal-battered with pickles and slaw, and only the slightest amount of tartar sauce. I appreciated them holding back on the tartar and if I get this again, I will ask for it to be withheld altogether, because it turned out that drizzling vinegar - from the bottle on the table - was a much better complement to the flavors of the sandwich.

Next time I return to Van Horn I will be trying the pulled pork. I hope I get the waitress from my first visit, but even if I don't, I'll still eat there. The food is that good.
Posted by JustinM at 9:30 AM

What's with all the Texas Pete's?!

You need to come down to Baltimore and we will get you a pit need and a crab cake:-) or maybe some pit beef on a crab cake haha

Is it just me or do all these Brooklyn restaurants seem to have awesome little secluded back patios? Or are you really just going to the same place over and over and making up names for cool sounding restaurants? The little bbq in back does add a touch of home.

You're half-right, Rob. It's actually my backyard. I just take pictures of different restaurant exteriors then I go home and cook.

I can't wait to try more of their sandwiches. Everything was so good.