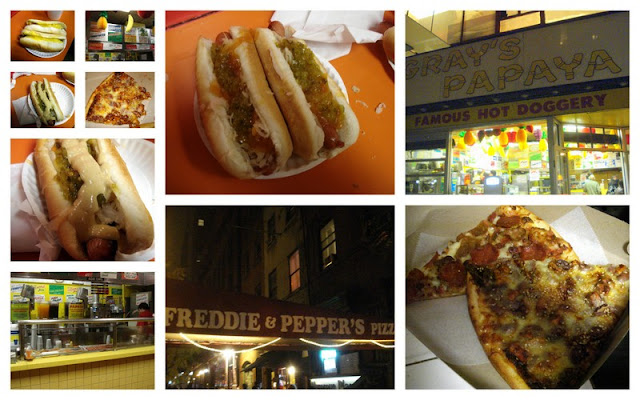 Elizabeth and I went to a concert last night (Regina Spektor) on the Upper West Side. It just so happened Gray's Papaya was only a couple of blocks away; I've heard about it for years and wanted to go. ("She's not in the van, she's not in Gray's Papaya... she's gone.")

I met Elizabeth at work and we took the subway there. I didn't feel like lugging around my DSLR camera, so I decided to take a point-and-shoot. But a funny thing happened. My most recent point-and-shoot (from 2010) is broken. And my second-most recent one (2006), I cannot find. (We still have several boxes in the closest that we haven't unpacked because we have yet to buy an entertainment center.) So I had to take an ancient - relatively speaking - point-and-shoot. I think it's from 2005. The lousy photo quality is obvious. 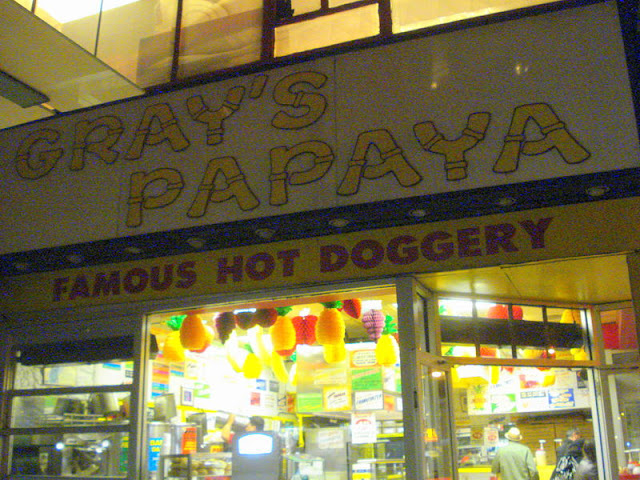 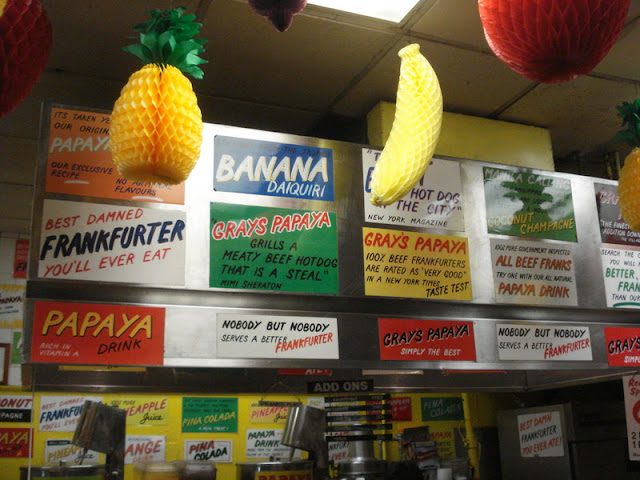 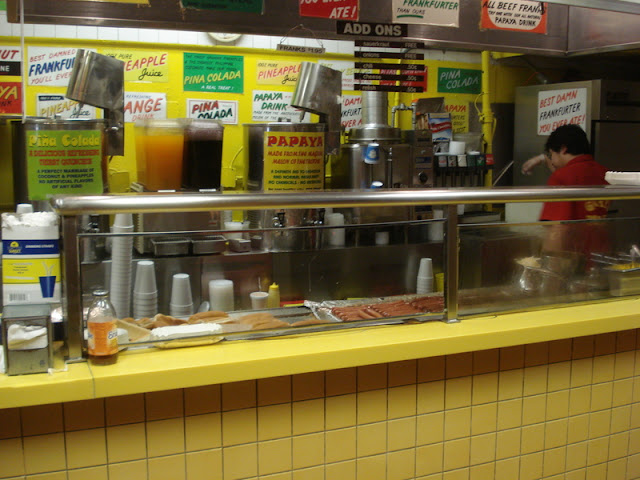 Gray's Papaya looked exactly like I expected. Which is a good thing. 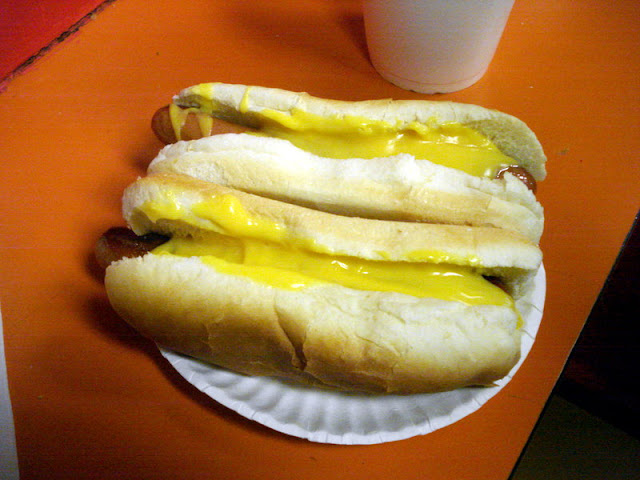 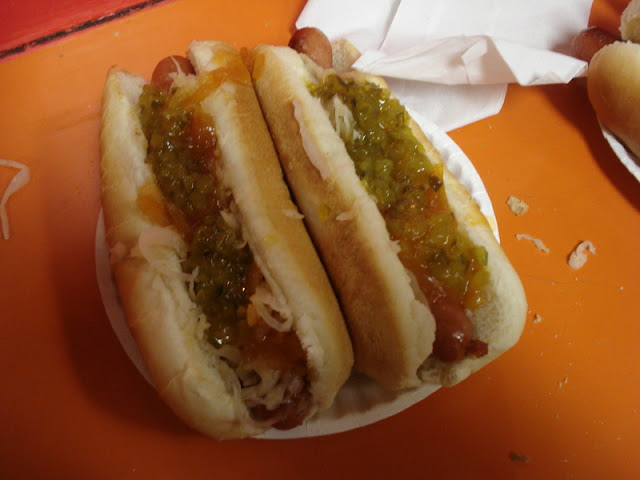 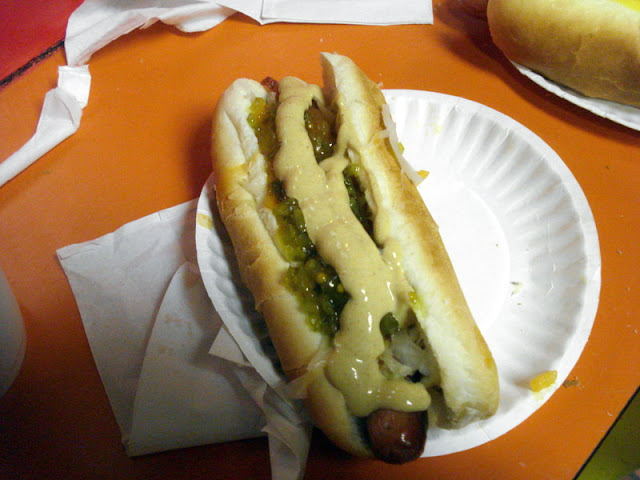 Elizabeth had two hot dogs with cheese; I had two with kraut, onions and relish. With two root beers, the grand total was $11.95. I don't remember for sure but I'd be willing to bet this is the cheapest dinner we have had in NYC.

The dogs themselves were just fine. Not anything special, but miles ahead of Nathan's Famous, and considerably cheaper.

(By the way, there is a hot dog place at which I ate in July, but I did not write it up because I planned to go back and get another dog... but I never did. It's one of the best hot dog joints to which I have ever been. I have to accompany Elizabeth to Manhattan for something on Saturday, so I'm going to try to get another one of them and write the place up next week.)

Elizabeth tried a bite with mustard and said it was really good, so I slathered one of my dogs with mustard, too. And she was right, it was very tasty.

I would be glad to return and eat at Gray's Papaya any time, but if I don't ever make it back, that's okay, too. 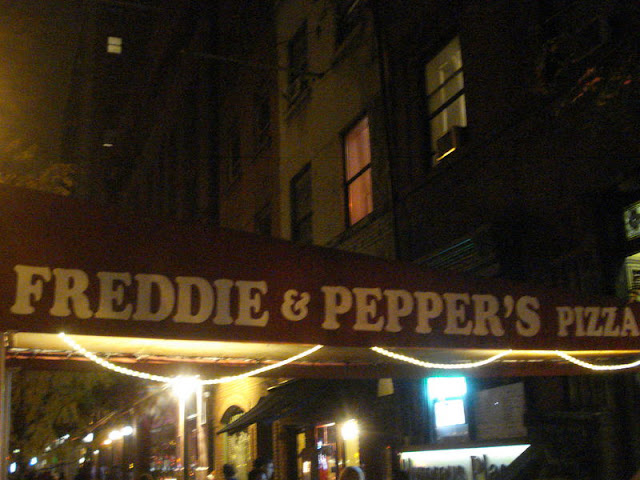 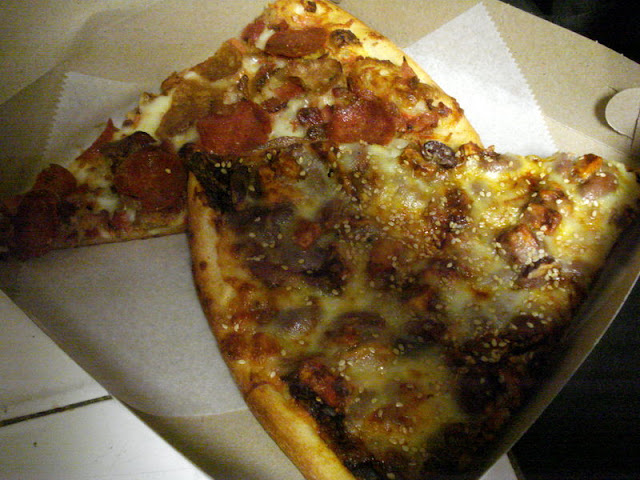 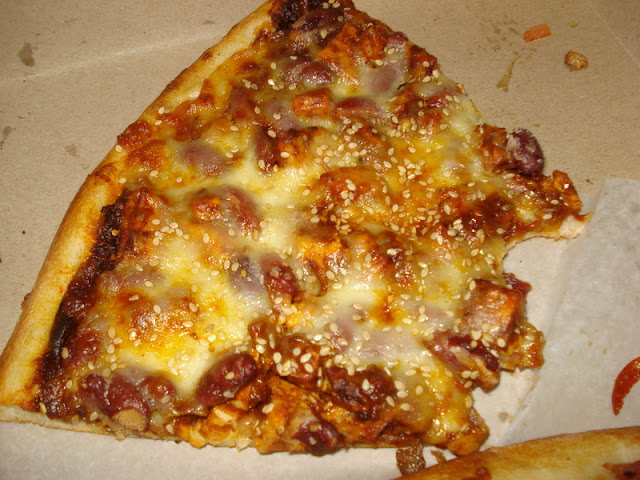 We still had an hour to kill before the show started, so I suggested a walk for a few blocks. And I was still a little hungry. When I saw Freddie & Pepper's Pizza Pub, I announced that I wanted a slice of pizza. I selected the meat lovers, with pepperoni, meatball, and sausage. I spied another slice that looked kind of like barbecue chicken but obviously wasn't.

I've never seen or even heard of a chicken mole pizza.

There's a reason why: it was terrible. The sauce was the burnt, chocolate-dominated mole kind that I loathe, where no flavor of peppers is noticeable. The beans added nothing to the slice. For the second time in my life I refused to eat a slice of pizza.

The meat lovers was pretty damn good, though. Elizabeth took two bites and agreed with me.

I would also return to Freddie & Pepper's, however next time I will ask them to leave the slices in the oven for an extra minute. They only reheated them for perhaps 30 seconds, and it just wasn't enough.

I hope you enjoyed this, even though the pictures sucked.

If you would like, I'll make it up to you tomorrow with a new Trader Joe's post...
Posted by JustinM at 11:00 AM

Gray's Papaya is on my list to hit next time I'm in NYC. I'm glad they didn't suck.

It's great that the two of you went to see a Regina Spektor concert. How was it? Does she play as she does for albums, or do quirky improvisations?

Yes - another Trader Joe's post, please. They are fun and interesting.

Regina was great. I am not familiar with her albums so I can't actually answer your question. The crowd was quite annoying, even by concert crowd standards.

(I am bitter mostly because of two women behind us - one who kept taking flash photograhps even though we were well out of the effective range of her flash, and another who sang along to EVERY song, as if we were there to hear her.)

Good post! If you feel the need to atone for said pictures, by all means. Bring on the TJ post!

A Friday, a cold front and a TJ's post! Yippie!

The dogs and the concert were both great! It was a good night.