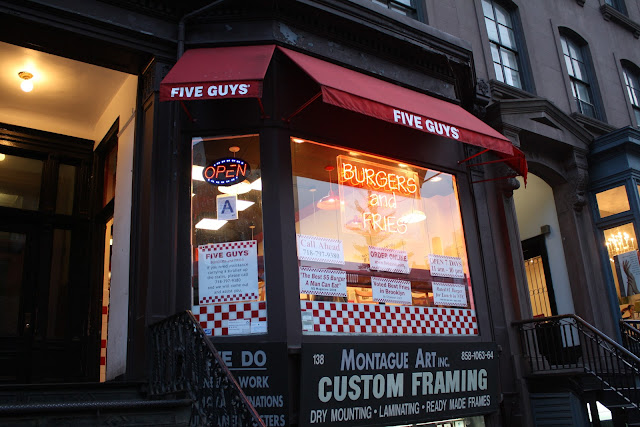 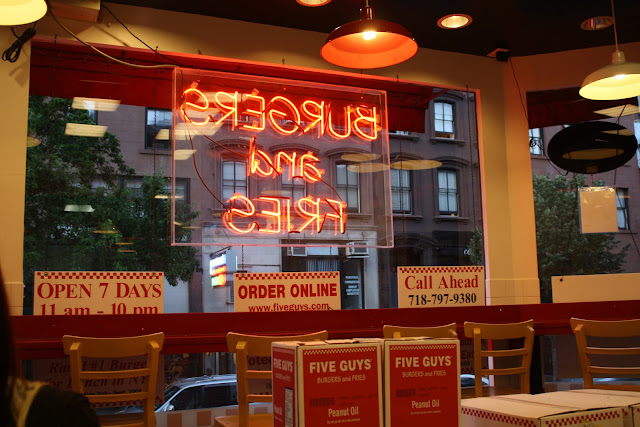 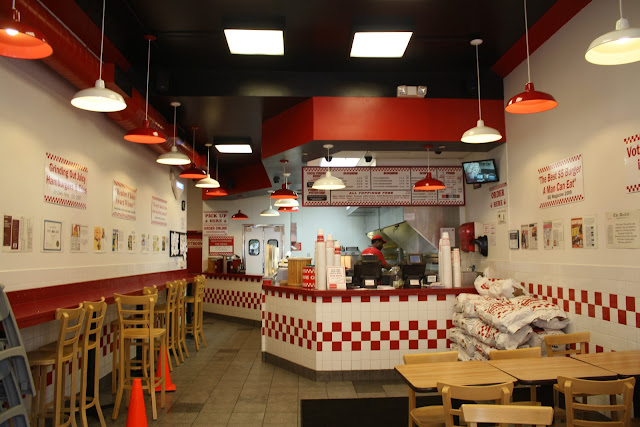 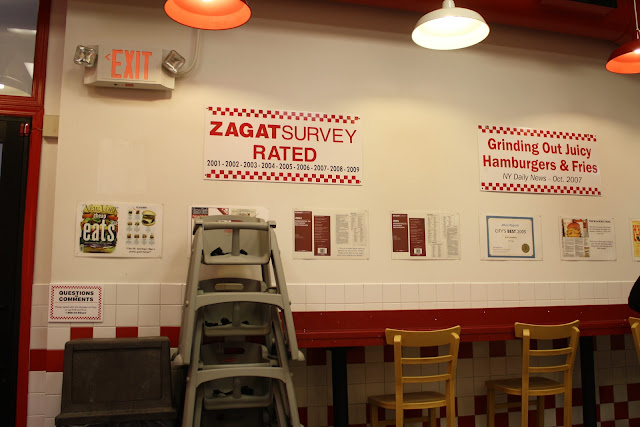 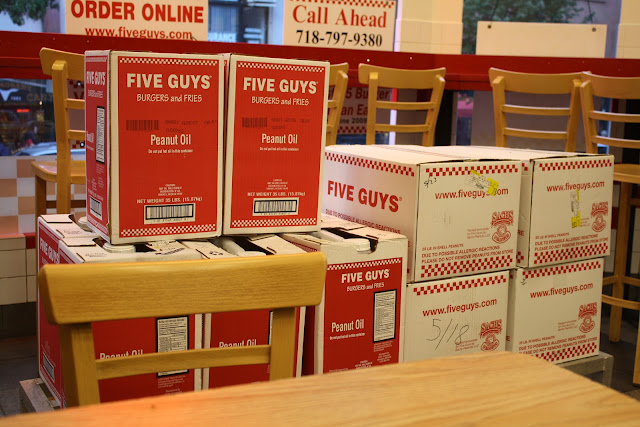 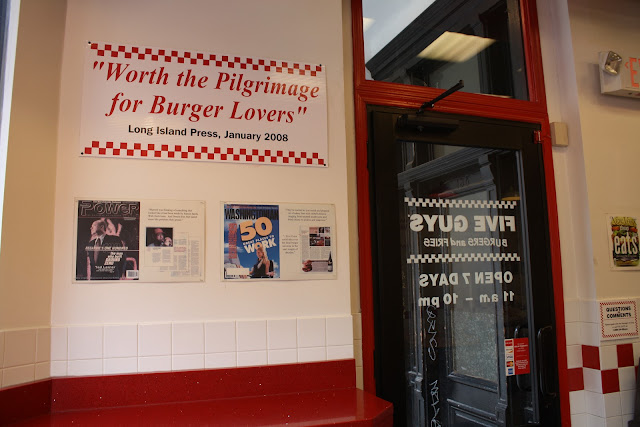 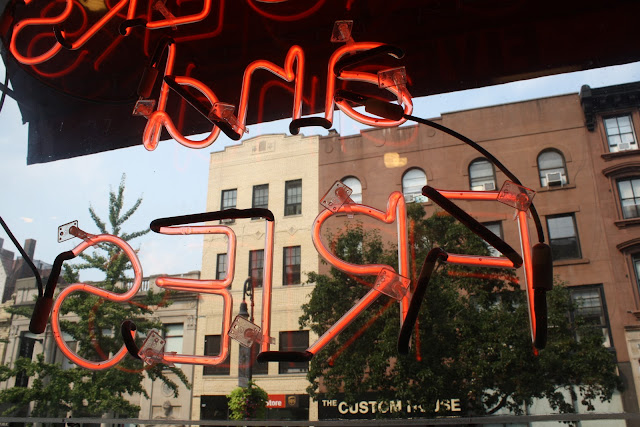 After I wrote about Shake Shack on Monday, I got more than one email from people. Some suggested I try different Shake Shacks, that the Brooklyn location is not as good. And more than one person said I should try Five Guys and Smashburger. I've never been to the latter and I will try to get there soon. But I have eaten at the former many times: it's on the next block and it's always a good standby when I don't feel like making dinner or we can't decide what we want.

I first ate at and wrote about Five Guys two and half years ago when, after hearing rumors of their legendary burgers for years from my East Coast friends, I finally ventured down to Carson - the closest location to South Pasadena at the time - to give it a try. I definitely liked it but laughed to myself at the suggestion it was remotely close to being as good as In-N-Out. It wasn't nearly as good, and besides that, it wasn't even the same kind of burger; it reminded me more of Fatburger or The Habit, and both of those places had locations close to Pasadena, so I didn't see myself returning to Five Guys in Southern California.

And I never did. But a few people told me that the East Coast locations of Five Guys were better, so, upon moving to Brooklyn Heights, I tried Five Guys. I did not see any difference between it and the Carson location. But, as I wrote, I definitely liked the Carson location, so that's not a knock. Do I like Five Guys as much as Shake Shack? Nope. But Five Guys is a few blocks closer - and it's always clean and well-organized and the employees there are super-friendly - so I've eaten there several times. Here's some of the things I've had. 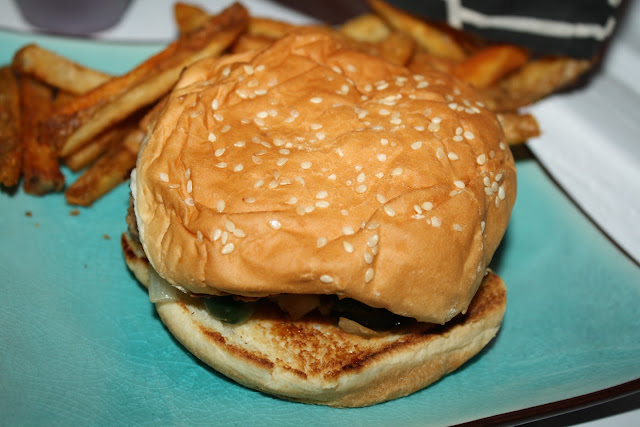 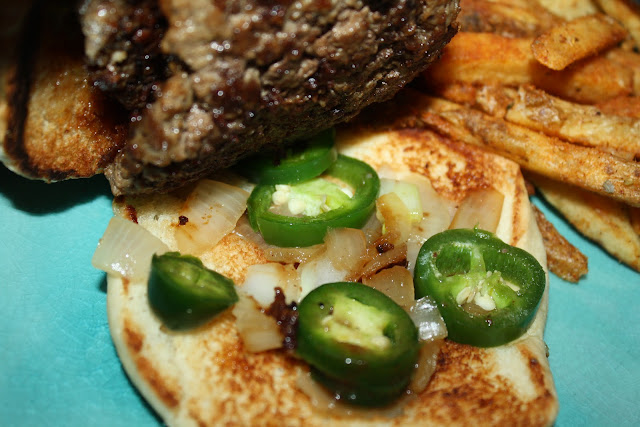 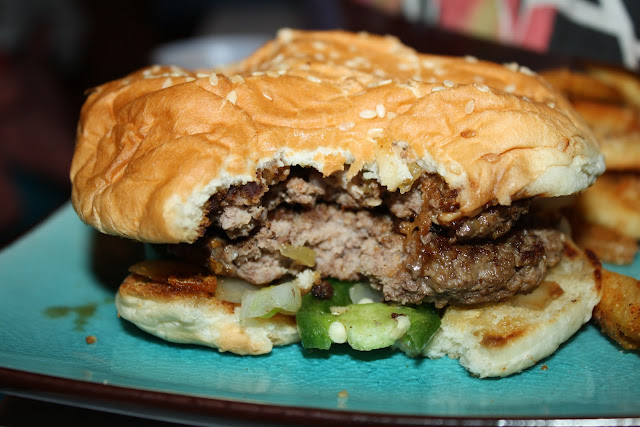 The second night we were in Brooklyn, when nothing was unpacked except a couple of boxes of kitchen stuff, we got Five Guys. I had a burger with onions, jalapenos and mayo. Five Guys burgers, for those of you who are not familiar, all come with two patties, unless you order the "little" version, which has only one patty. And you are able to choose from about 15 different toppings, as many as you want for no additional charge. 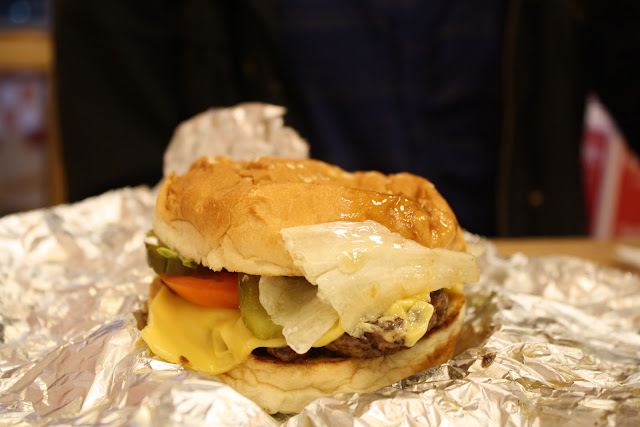 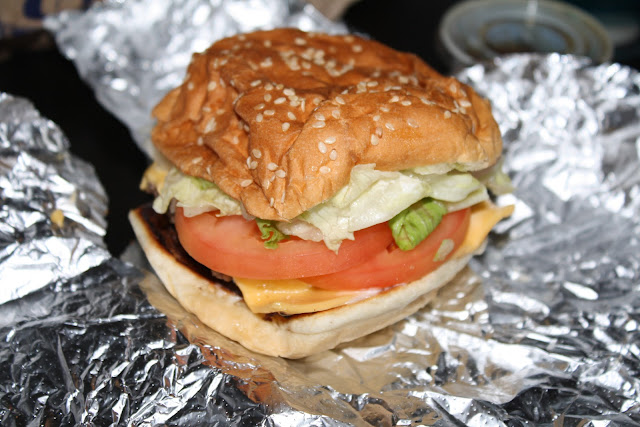 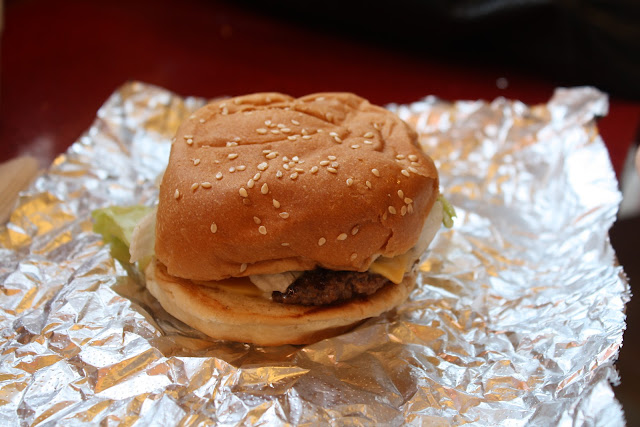 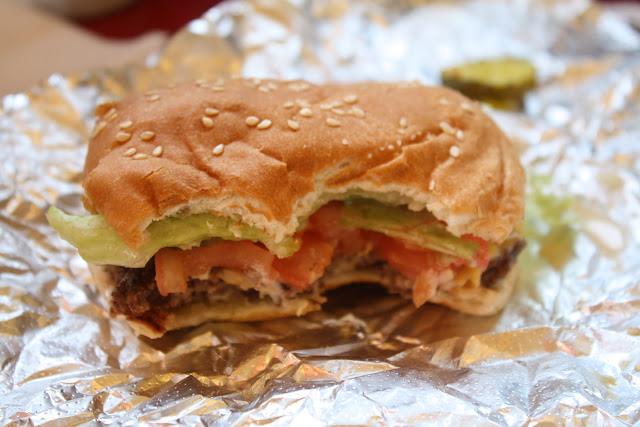 Elizabeth is one of those people who finds something she likes and then gets it every single time. There is nothing wrong with that. If it ain't broke don't try to fix it, as the Fresh Prince rapped in "Summertime." (Although someone else may have said it first.) She gets the little cheeseburger with lettuce, tomato, pickles and mayo. 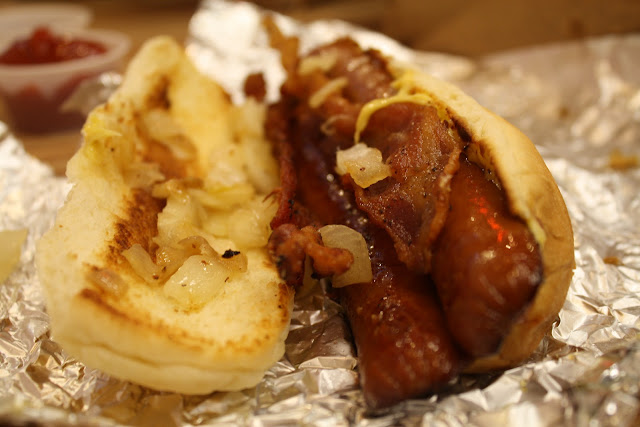 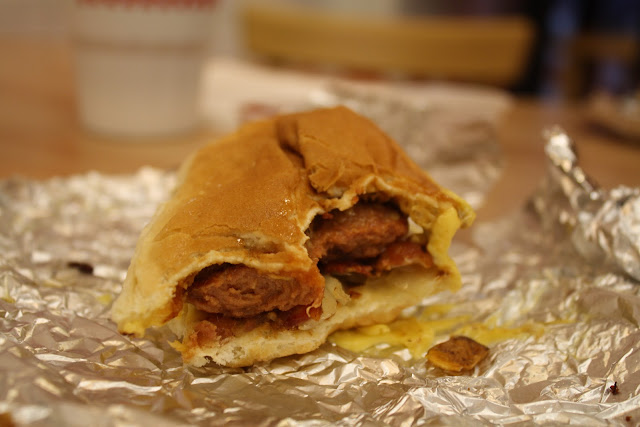 Once I decided to try a hot dog. I got the bacon cheese dog with barbecue sauce. It was delicious, but it just wasn't filling enough and, at $4.50, only one dollar cheaper than the burger, which is much more substantial. So I decided to stick with the burgers from now on. 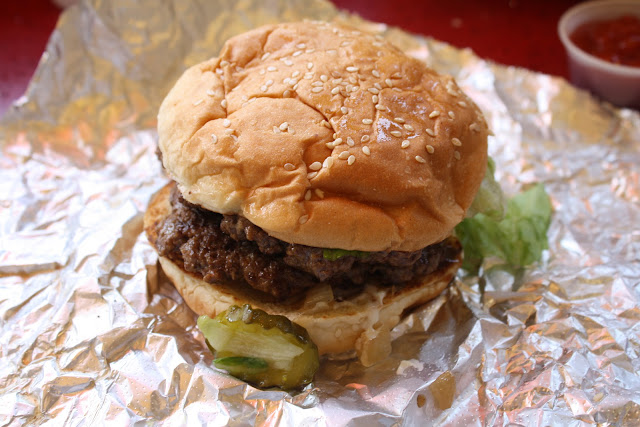 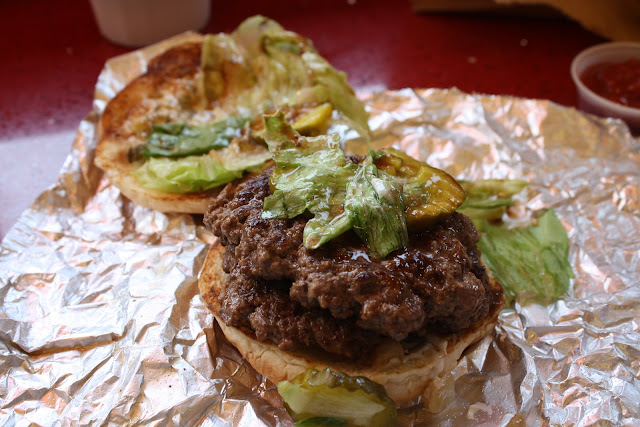 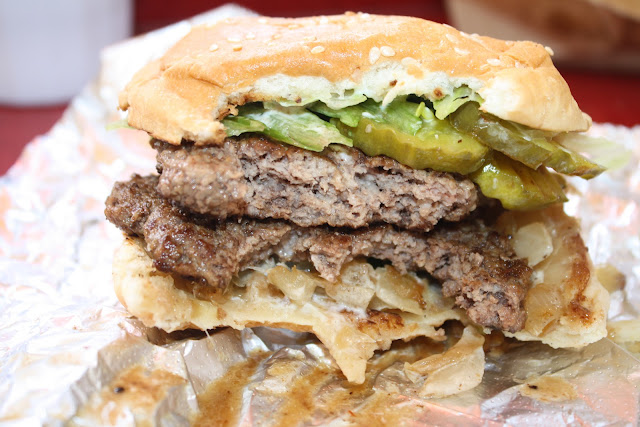 So this is what I usually get when I'm not feeling adventurous or buzzed: grilled onions, pickles, lettuce, steak sauce. And this is probably my favorite way to get a Five Guys burger. 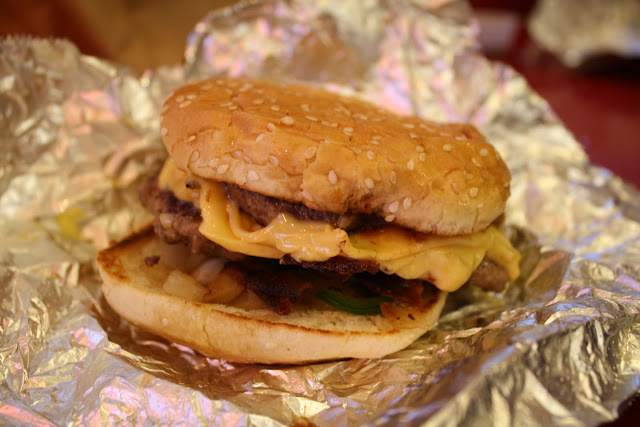 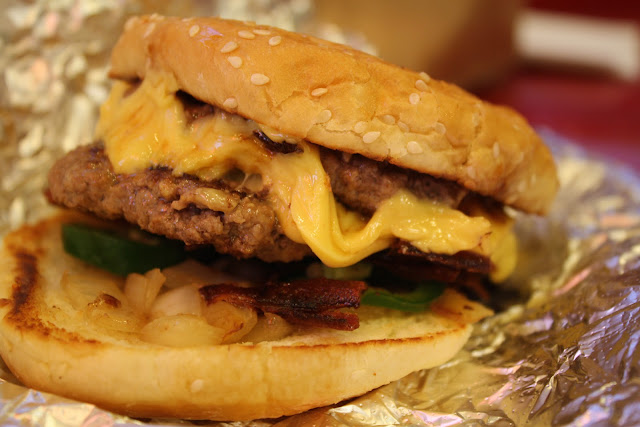 Even after discovering my favorite way to have their burger, I sometimes stray. I tried this one with cheese, jalapeno, onion and bacon. Not as good. I don't really like cheese on burgers unless I'm making them myself. American cheese just doesn't do it for me. 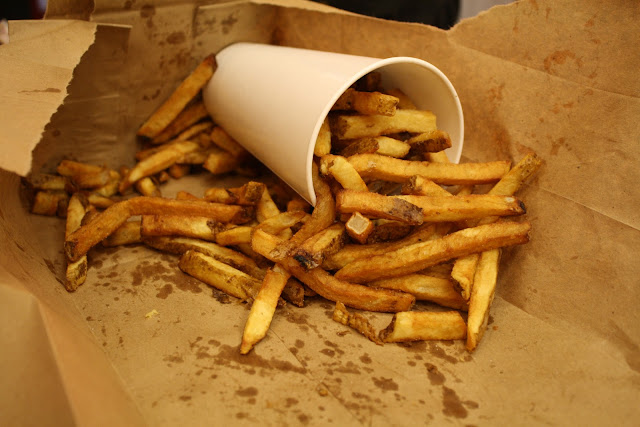 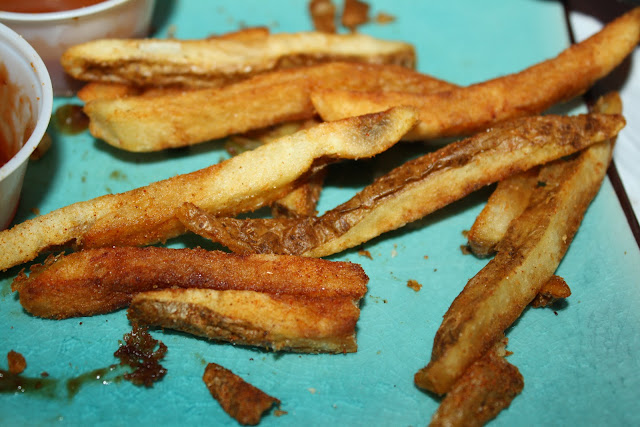 And then there are the fries. I'm just not a fan. They give you an enormous bag, filling a cup and then pouring more in on top of that. The two of us have never finished one order of large fries. But they're just not that good. I suppose if you dump them all out of the bag immediately, so that they don't have a chance to steam themselves, they might be better. But most of the fries are limp and often extremely greasy.

Now, what I have done on more than one occasion is get an order of Five Guys fries in the afternoon and then reheat them in the oven at dinnertime. The fries crisp up and sweat out their oil in the oven, which you can then blot to make them less greasy. They are much improved this way... but that doesn't really help you when you're at the restaurant and wanting food. 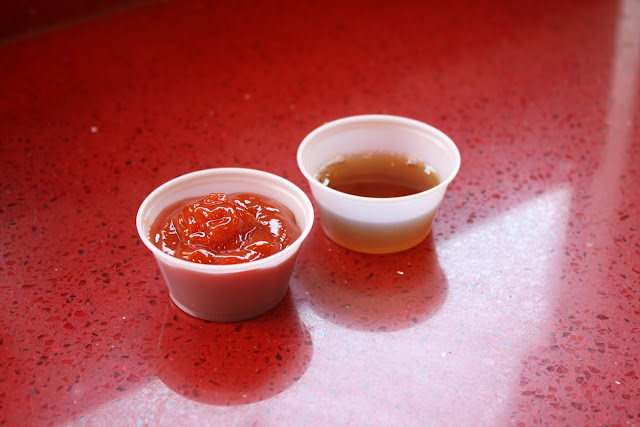 I do have to mention that I really appreciate them leaving out a bottle of malt vinegar for you. I wish more fast food places did this.

So I don't like Five Guys as much as the other chains I mentioned the other day: In-N-Out, Habit, or Fatburger, and I've now discovered I don't even like it as much as Shake Shack. But I definitely like their burgers and I'm sure I will continue getting one every month or two, especially now that the weather is getting colder; I imagine proximity will play more and more of a roll in where I dine.
Posted by JustinM at 1:10 PM

While I totally agree with you, I'm not sure I'd have the courage to actually write it on a blog!

Are you ready for the barrage of comments and hate mail from people who think you're just a crazy Californian?

I like Five Guys, and I've gone there more now that when I lived right next door.

Ben: The comments of people I do not know - especially the kind of people who are so threatened by another person's opinion that they write "hate mail"- have never bothered me.

Liz: Now if we can just get you to that Indian place.

Yep, we always bring our 5 Guys fries home and bake them. Works like a charm.

I've never been very impressed with Five Guys. My boyfriend loves it, so I usually get some sushi from the restaurant down the street on those nights.

I prefer Smashburger and Cheeburger Cheeburger. But I'd go to Steak n Shake, Culver's, or In n Out (oh, why am I in St. Louis?! I miss In n Out so much!) over almost any of the other options.

I think Five Guys is just ok. Their buns don't taste fresh and that kills it for me.

To me Five Guys is pretty good because the burgers are big, the toppings are unlimited and super fresh plus you don't have to wait an hour like Shake Shack. With that being said, the food is expensive for what it is, at least in NY.
For the same amount of money give or take, I can get a Shake Stack from Shake Shack and it will taste better and still be rather filling (although you get A LOT more beef and are more full after a bacon cheeseburger from Five Guys).
All in all, I would make my own burgers (love homemade juicy lucys with cheese inside), before I go out of my way to a Five Guys. And if I'm going out with $15 or so for myself and have time to kill, Shake Shack it is.
Now all I need is proper Chik Fil A and an in and out burger joint in my city and I'm happy.

Could one of you who have successfully reheated Five Guys fries post time and temp for future generations? That's what I was looking for. (And yes, In N Out is way better)

Hi Greg. It's been a while since I've done it (I've almost completely stopped eating fries) but I think it was 400 degrees for 7-10 minutes (from room temperature).