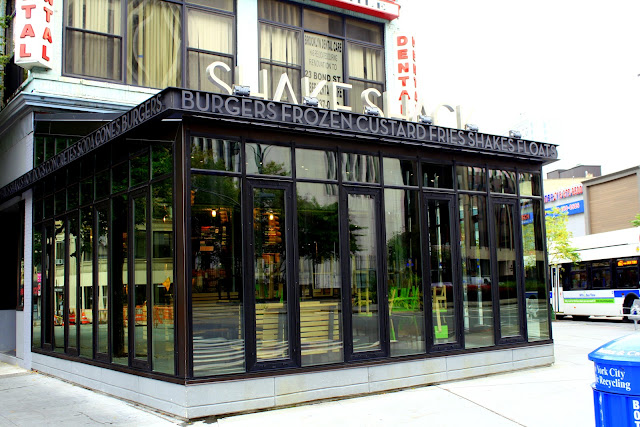 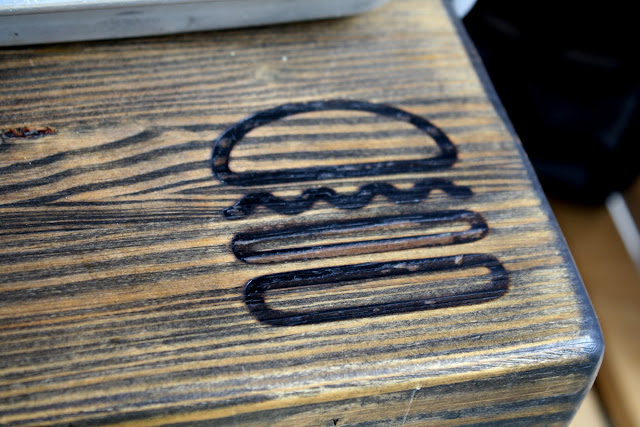 The other day I received a picture message from my fried Tim: he was trying The Habit Burger for the first time, and he really liked it. We started comparing notes on favorite burger chains. In-N-Out, Five Guys, Habit, Fatburger, etc. (I mentioned how much I loved Whataburger on my trip out to New York; even after only two visits I am considering putting it in my top 5.)

Then it occurred to me that I have yet to visit Shake Shack. I'd planned to visit the original one day a couple of months ago when I was in Manhattan. It was after 2PM so I figured I might be able to avoid one of their legendary long lines. I was not. There were more than 100 people in line. "Screw this," I said, and continued on my walk.

But there is a Shake Shack in Brooklyn about five blocks from us, so the other day I went in the mid-afternoon. It was still busy, but not too bad; I figured if I was ever going to try the place, this was the time. Shake Shack has such a strong following and is so frequently mentioned in the same breath as In-N-Out and Five Guys, I needed to see what the hype is all about. 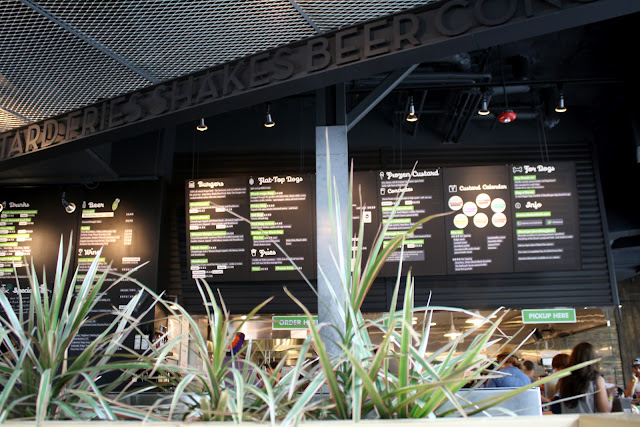 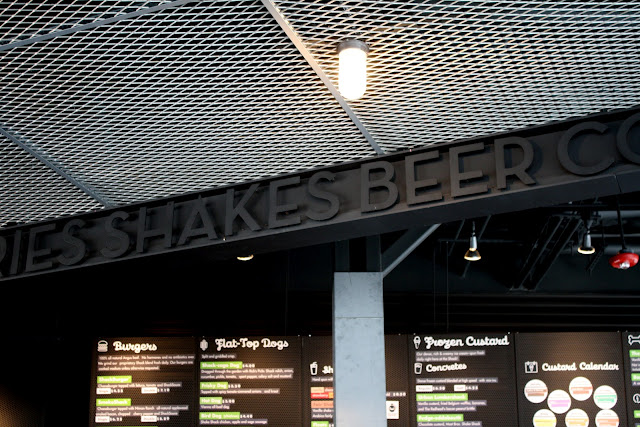 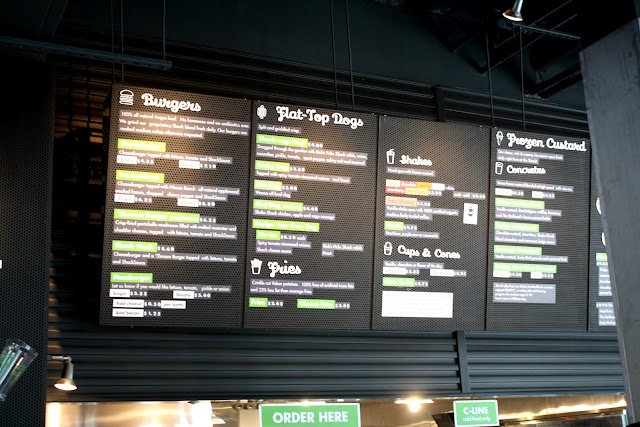 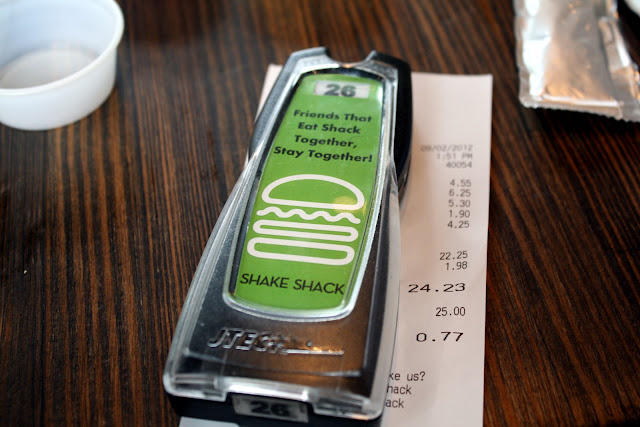 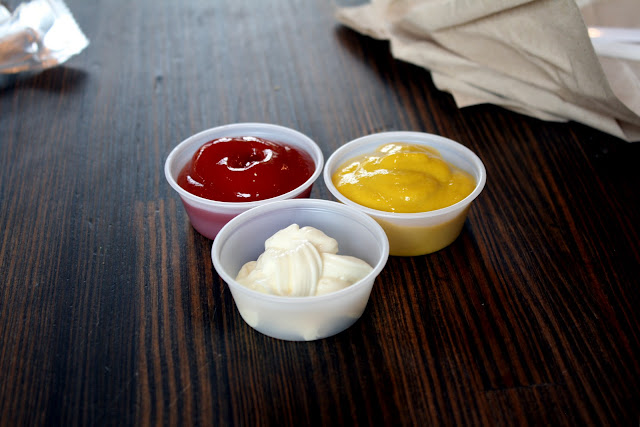 I placed our order: a ShackBurger, SmokeShack, two fries, an iced tea, and a vanilla custard. A little over ten minutes elapsed before our pager starting vibrating. 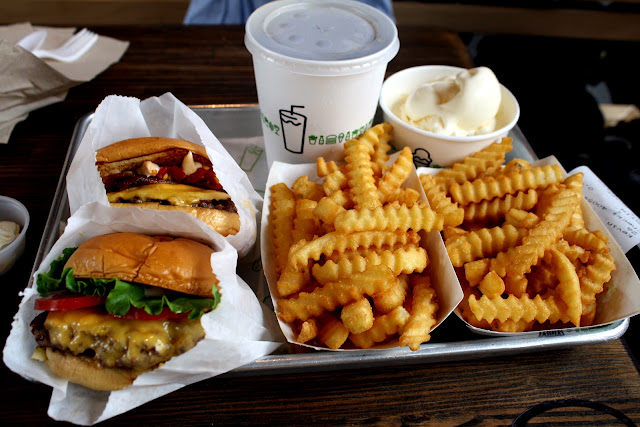 I was realy hungry y this point and the food looked great. It had been a long time since I was this excited to try a meal. 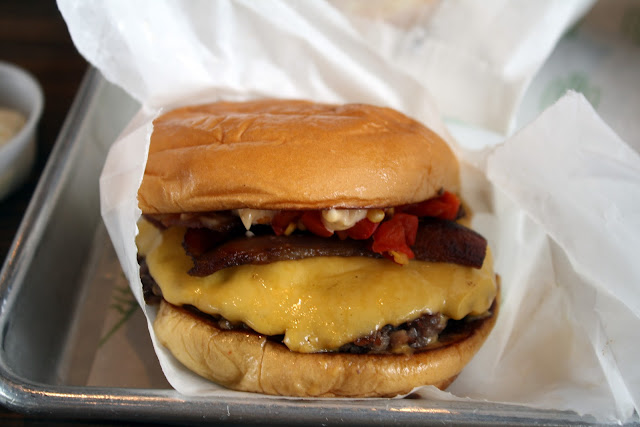 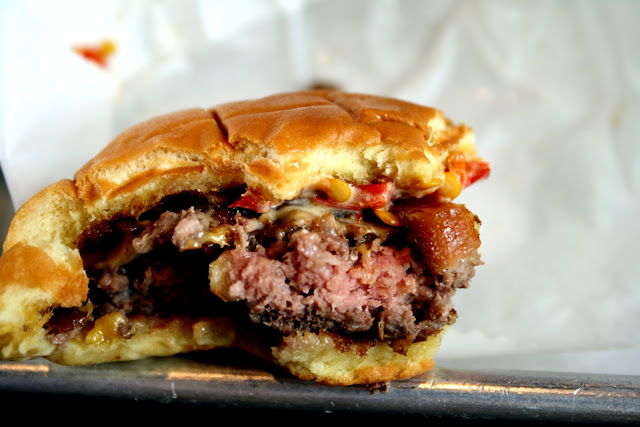 The SmokeShack includes bacon, cherry peppers, and "Shack Sauce." I loved it. The bun was buttery soft, the meat was juicy and the flavors of the cherry pepper, bacon and sauce all worked well together. The cheese was neither here nor there; the burger would have neither been improved nor harmed with its omission.

I did not like it as much as a Double-Double - not even close, actually - but then again I've had hundreds of those in my life and only one Shake Shack burger. My friend Bryce was visiting last week and tried Shake Shack as well, and he put it like this: "I guess I've been spoiled growing up with In-N-Out."

(One thing that is not subjective: this burger cost $6.25 - twice the price of a Double-Double. Once again, a burger chain does not come close to matching the value of In-N-Out.) 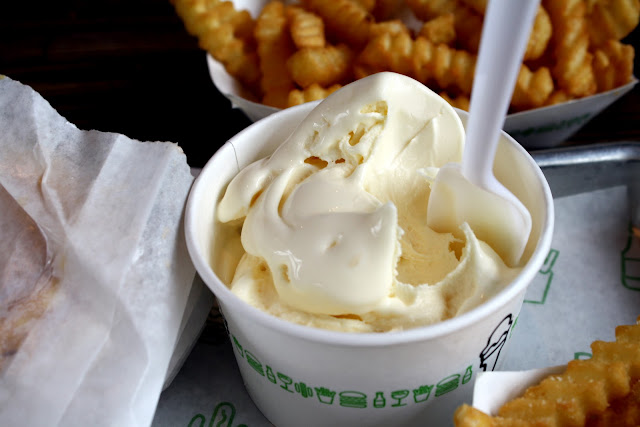 The vanilla frozen custard was good but very rich. I ate about half of it. It would take someone who likes dessert more than I - which is most people - to eat the whole thing. 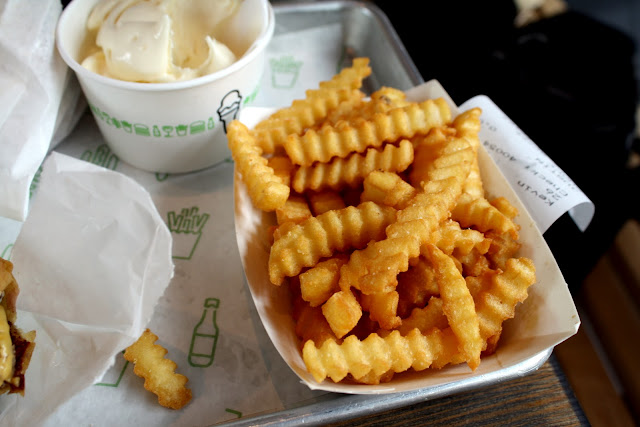 The fries were great. I have written this before, but the older I get, the less and less I order fries. I still love fries when they are executed properly: there is almost no food I love more than a good order of Belgian fries. But most restaurants - and almost all fast food restaurants - do not cook their fries long enough. Mealy, previously-frozen piece of potato do nothing for me.

My second-favorite kind of fry, after Belgian, is the crinkle-cut. When done well, I love the crispy outside ridges and the soft potato inside. Del Taco is the only chain at which I have regularly eaten that utilizes crinkle-cuts, but only about 10% of the time do they turn out the golden, crispy variety that I love.

Well, Shack Shake does crinkle-cuts and these orders were perfect. They came out a deep golden color and every single one of them - even the ones resting on the bottom of the pile - were crispy. If a place as busy as Shake Shack can turn out fries this good, other fast food chains should be ashamed that they can't do it, too. 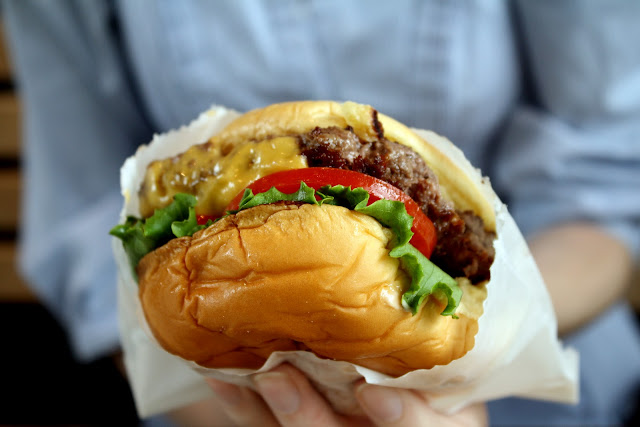 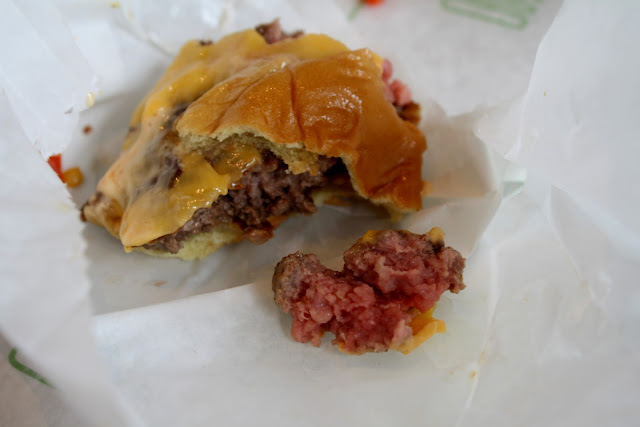 Elizabeth's ShackBurger was good, but she ended up not being able to eat more than a quarter of it. "Our burgers are cooked medium unless otherwise requested," the menu claims. The above picture shows that is not always the case. A good section of the burger was rare, almost raw. I was more than willing to return it for her but she was fine eating just half, so I consumed the rest. It was good - not as good as my SmokeShack - but it was even a little too rare for me, which almost never happens.

I will definitely go back to Shake Shack, though I will never wait in one of their long lines and I will be sure to check the doneness of the burgers from now on. The only other close-by option among my favorite burger chains that I mentioned in the first paragraph is Five Guys. I liked my Shake Shack burger a little more, and my fries a lot more. Shake Shack won't ever become the at-least-once-a-month standby that In-N-Out was when I lived in California, but then again there is no restaurant here that I visit at least once a month except my local Chinese take-out joint.
Posted by JustinM at 9:30 AM

The burgers sure LOOK good. So good, in fact, that I'm surprised that it wasn't a decisive victory for Shake Shack.
Good news is that the more players there are in the "premium" fast-food burger race, the higher the bar for the new entries. Looking forward to any and all newcomers!

damn that is raw. vampire-style.

Very nice! Looks really good, I'm always happy when I order med-rare and I get it rare...I know weird haha thank you for the post I have been dying!!:-)

And I have never been off of the east coast...in&out is on my bucket list

I don't think I've ever met anyone who grew up loving In-N-Out that later said they tried and liked Five Guys or something else better. The same, I'm sure, goes for East-coasters who've had Five Guys for years trying In-N-Out, no? They're all great burgers, and my Shack Burger was excellent, but I think there is always bias. But if I could only have one, yes, it would be In-N-Out...

The fries were great as well, but my favorite of the trip were my Nathan's fries at Yankee Stadium. Big, crispy, fluffy pieces of goodness.

My Fair Shake(coffee shake) was amazing, though, and I'll be craving those...

Upper West Side Shake Shack on a Wednesday with slight rain at 2pm was empty!

oh geez, now I am feeling bad about not getting one last In and Out before leaving CA. It looks delicious, though, too bad about the raw bits. Can't wait to get my paws on some custard - it's all over PA.

First off, I'd like to thank you for the review, we need more NYC reviews please!
I love, LOVE Shake Shack and was a little surprised that you didn't enjoy it as much, but I think you should do the following next time you go to a Shake Shack. 1. Go to the Upper West Side or original location at the park. 2. Order a Shack Stack (Shack Burger with fried Mushroom filled with cheese (amazing). I have never had in and out but the price alone makes me a huge fan. The burgers at Shake Shack are great but the fact that I can have something similar or better at in and out kinda sucks, especially when you don't have an in and out anywhere close. I might have had it in Vegas but I don't remember lol.

If you want good fries, go to Pommes Frites where they have a bunch of different dipping sauces and amazing authentic Belgian style frites.

Last but not least, you have to consider that NYC is one of the most expensive places to go out. That's why you don't see a lot of fast food chains in the city besides the norm. Brooklyn is fine and everything but venturing out into the city will grant you many culinary rewards Justin.

Wait, I said I "loved" the burger and I called the fries "perfect." And you're surprised I "didn't enjoy it as much"? I don't understand.

BTW Pommes Frites has appeared here three times, they are some of the best fries I have ever had.

Culver's has crinkle-cut fries. There not that good though.