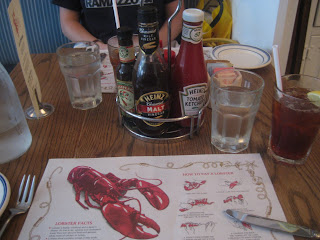 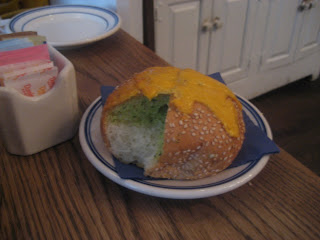 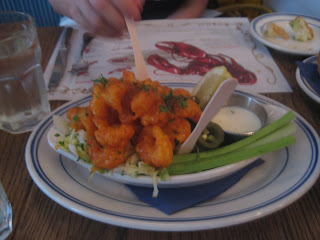 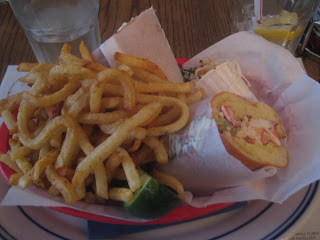 I first saw Laurent Tourondel on Food Network several years ago, making the greatest lobster roll I have ever seen. I vowed that the next time I was in New York I would seek one out. He has several restaurants in the city, including BLT Fish in the Flatiron district. Downstairs of that is a less formal, (slightly) less expensive restaurant called BLT Fish Shack.

My friend and I stopped there for lunch. The place is half-cute, half silly - the kind of joint you would find at Disneyland should they decide to open a New England-style fish shack, most likely designed by someone who has spent little time in an actual one. (I once ate in an authentic lobster shack in Scituate, Massachusetts, on the last day of the season it was open. BLT Fish Shack reminded me of that place in the way that Kobe Bryant reminds me of Michael Jordan, which is to say, only slightly.)

They served us some homemade garlic bread. It was okay, although I could not get past the appearance. It was an unnatural shade of green on the inside with an oily, bright orange cheese baked on top. I think I took one bite and let the bread sit on the table to see if it would change colors like a berserk science experiment.

I started with an order of buffalo shrimp, perhaps my favorite food item ever. Very few places in California do it well. I once had an order at Hooters that made me sick for two days. (Though in retrospect it probably could have been much worse.) When I was a senior in high school my two best friends and I would go to Bennigan's every night to watch Monday Night Football, and I always ate at least one - often three - orders of buffalo shrimp during the course of the game. I don't think I have ever had better.

Until now. These were perfect. I do not use that word often when describing food. But it is apropos here. There is literally not a thing I can think of that would have made these shrimp better. The batter was light but still crisp, the shrimp were not overcooked, and the sauce was not full of butter, as many buffalo sauces are.

For the main course, I had the lobster roll. It was great. There was a good amount of lobster meat, the buttered roll was nice, and the fries were awesome. Was it worth the $25 price tag? For me, yes. If the restaurant was in Pasadena I would rarely go there, but considering it was New York (and vacation,) and I had been craving this particular meal for months if not years, it was well worth it.