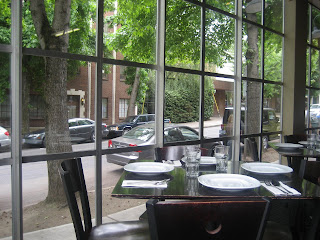 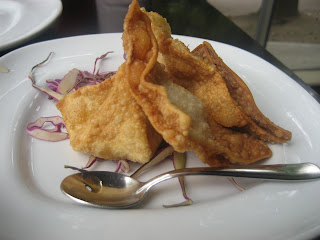 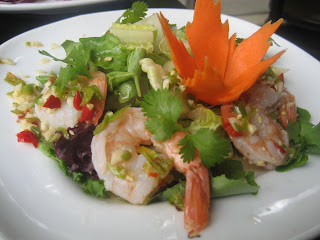 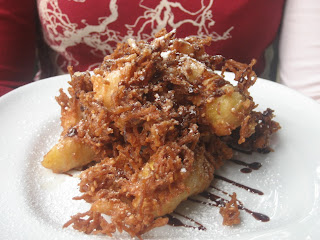 This one is for my brother. Perhaps his favorite restaurant anywhere is Typhoon in Portland, on 23rd Street (or "Trendy Third," as my friends in Portland call it.) The last time I was in Portland, my brother was there with me for one day before he headed up to the San Juan Islands for some kayaking. He really wanted to go here, but I wanted barbecue, so we did that instead. Then, a few days later after he left, I went to Typhoon. I had never been there before, Thai food isn't my favorite (I don't dislike it, but I like Chinese, Japanese, Korean, and Malaysian much more,) but I knew my brother would hate hearing about me eating there without him.
-
I wasn't starving but I wanted to get a snack before boarding the train back to Los Angeles. I started with an order of fried wontons with pork and shrimp inside. They were good, but nothing special at all. Any Asian restaurant in the San Gabriel Valley serves better wontons.
-
The other dish I had, though, was "superwild shrimp" - some shrimp marinated in a "super hot fresh chili and garlic sauce." Those are two of my favorite flavors, and when I read the menu's description that these are "not for the faint of heart," I knew I wanted them.
-
They were outstanding. The shrimp were very spicy and the dish was drizzled with oil and diced chilis. After I ate the shrimp, I ate all the greens and cilantro on which they were served. I could eat this every day. I have tried to make it at home since this meal, but it's just not as good.
-
My friend, who was giving me a ride to the train station, wasn't really hungry, but she took a few bites of my food, then decided she wanted something sweet. So she ordered a fried banana. I'm not much of a dessert eater, but this was perhaps the most decadent dessert I have ever seen, served with chocolate sauce and dusted with powdered sugar. I thought about taking a bite, but just couldn't bring myself to do it. She loved it, though.
Posted by JustinM at 2:37 PM