The Beauty Of The Days Gone By 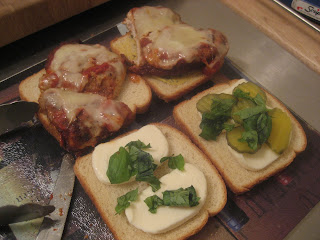 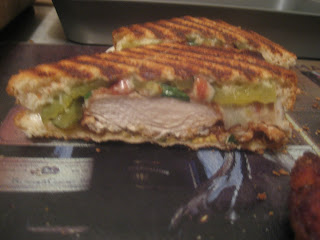 I love Van Morrison. I have been listening to his music for more than half my life and I have indelible memories for many of his songs. Whether it's listening to "Ancient Highway" while driving through Kentucky at sunset on a warm winter day or listening to "These Are The Days" with a bunch of friends while watching Michael Jordan's last game (I don't count the two seasons he came back,) Van's music has been a soundtrack to many of my favorite days. A few years ago my brother and I were in Belfast and we drove over to East Belfast to make a pilgrimage to the house Van was born in. Van is the man.

So instead of calling this post "leftovers," I'm borrowing the title of one of my favorite songs of Van's. My friend and I had leftover chicken parmesan from the night before and I decided to put it in a sandwich. I put some mustard on bread, added some more cheese, some pickles, and some basil, then put the sandwich on the panini press. It was even better than the night before.
Posted by JustinM at 1:10 PM