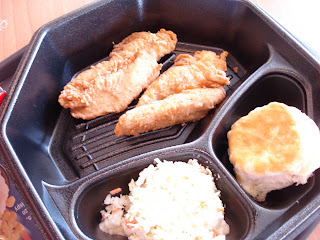 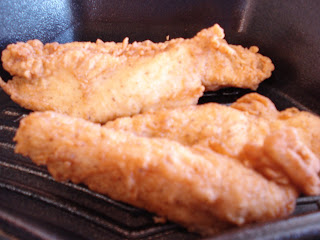 -
Half of the items at KFC I love, the other half I hate. I think their fried chicken is greasy, flavorless, repulsive junk. I think their Snackers are terrible. I don't care that they only cost 99 cents. I would not order them if they cost a nickel. The sandwiches always taste like they have been sitting under a heat lamp for a couple days (which is quite possible.) And I think their chicken strips are pretty lousy, too.
-
But I like their popcorn chicken. When I was a kid and they first came out with popcorn chicken, it was basically just little pieces of fried chicken skin with very little actual meat. Obviously, they were fantastic and I loved them. Years ago they re-introduced popcorn chicken, only with all-white meat chicken. They aren't quite as good as the old ones, but they're still pretty good, plus they aren't as likely to kill you.
-
I also have always loved the Chicken Littles. There are still a few KFCs around that serve these, although they are not common. They have not had the chicken nuggets for years, but those were great, too. And every few months they come out with boneless wings, which I always love, especially the sweet & spicy and tangy terriyaki flavors.
-
Recently they came out with the original recipe strips. I hate their original recipe chicken and I don't think their strips are any good, so why I thought I might actually enjoy these is beyond me. Predictably, they were inedible. They had no flavor, just like "original recipe" chicken. And, while the strips are sometimes good and crispy when they're right out of the fryer, these were soggy and rubbery.
-
These are probably the worst thing I have ever had from KFC, and that's saying a lot.
Posted by JustinM at 8:16 PM