Portland Through A Shot Glass And A Buffalo Squeeze

I've been to Portland more than any city outside of Southern California. I went there on family vacations as a kid. The summer before my senior year of high school my family and I went there to look at colleges. My brother went to college an hour south of Portland and I would visit him a couple times a year. One of my best friends from high school moved there and I visited him twice. And two of my good friends moved up there three years ago and I try to visit them at least once a year.

Last year, one of my best friends got married to a girl from Oregon and the wedding was in Portland. I used this as an excuse to take a road trip. I talked to him this weekend and his wife is pregnant, so in honor of them I am going to post pictures of the food I ate on my trip for their wedding.

The day before I got to Portland I stopped for lunch in Ashland at the Wild Goose Cafe. I walked in and the place was very dark. The window blinds were closed, there was hardly any light, and there were only two people in the restaurant, both sitting at the bar talking. I saw no employees, either in front or the kitchen. I stood there for perhaps two minutes when finally one of the women got up from her counter seat, turned to me, and said "Hi, one for lunch?" Obviously, it was my kind of place.

I had the fish & chips, which the waitress/hostess/woman-who-sits-at-the-counter-and-gossips told me were great. I doubted her, but they actually were quite good. "Great" would be an overstatement, but I really enjoyed them, and especially the red cabbage slaw. I complimented it to the waitress and the cook overheard from the kitchen window and shouted "Fuck, man, if you like it so much I'll give you another helping on the house!" Seriously, this was my kind of place. 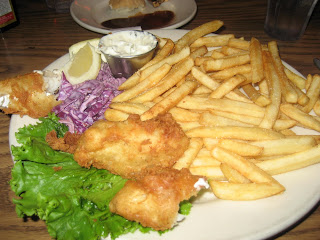 That night I stopped in Salem to watch a minor league baseball game, and I ate at one of my favorite restaurants in Oregon - Jonathan's Oyster Bar. I don't remember what my entree was, but I started with my usual crab cocktail. It was fantastic. (Now that I think about it, it's entirely possible I just had another one for my entree.) 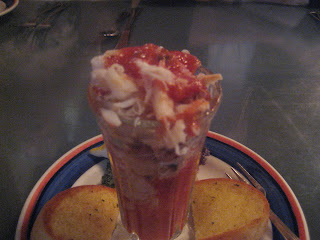 The next day I met up with my friends who live in Portland. We went to a pub right around the corner from their house, a fantastic place with baseball on all the televisions and $2.75 pints of Deschutes beers. They also have great food, including my sandwich, "The Grubber." My friend Toni had told me about this sandwich before I arrived and I was worried it would be a letdown, but it was not. Turkey, ham, lettuce, roasted red peppers, and aioli on three slices of grilled bread. 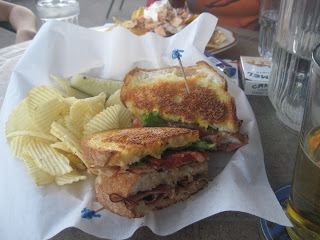 The next day, two friends and I drove out to the coast. We ate lunch at the Driftwood Inn in Cannon Beach. I started with a crab cocktail that was fantastic, one of the best I have ever had. Unfortunately, the shrimp sandwich I had was lousy. The shrimp were not fresh and had probably been frozen. They were absolutely swimming in butter, on lousy bread with limp fries. This was the worst food of the trip by far. 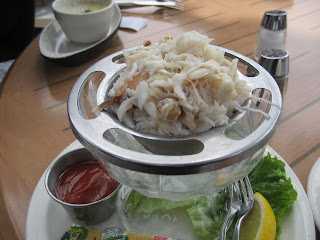 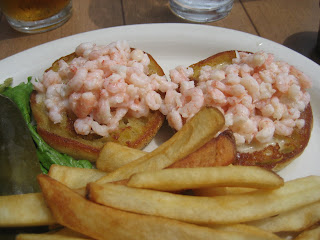 That night a group of us went to the Bridgeport Ale House, where an old friend from Pasadena was working. We had a few beers - I have never been a big fan of their beers; I much prefer Deschutes - and a couple appetizers. The oven roasted potatoes with garlic aioli were very good. The spinach and artichoke dip with flatbread was not so good. 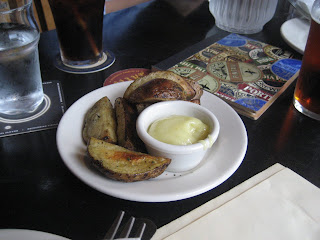 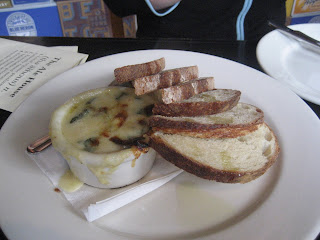 The next day, after my obligatory trip to Powell's City of Books, my friend and I had lunch at Paragon - a beautiful, glass-walled restaurant in the Pearl District. We started with an order of calamari (I'm not a huge fan but it's always been good in Portland.) I got a burger with caramelized onions, white cheddar and aioli, and my friend got a corned beef sandwich with horseradish aioli and roasted chilis. We cut the sandwiches in half and shared them. They were both great, although I liked the burger more. 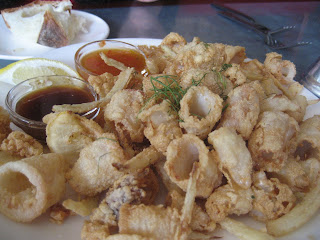 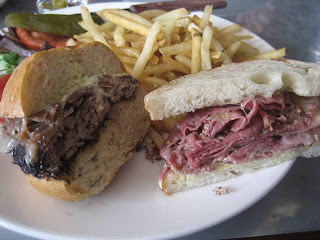 That night we had dinner at the Delta Cafe. In addition to the barbecue and PBR, we started with some catfish fingers. They were the best I have ever had outside of the south. 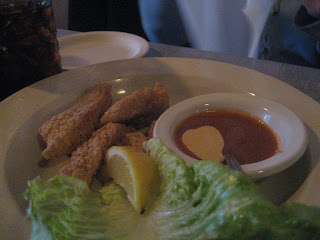 The day of the rehearsal dinner, I went to lunch with my friend at Manzana Rotisserie Grill . We again split an order of calamari and a couple sandwiches. She ordered the rotisserie chicken sandwich and I ordered a southwestern cheeseburger. The food was decent, but nowhere near as good as our lunch the day before at Paragon. 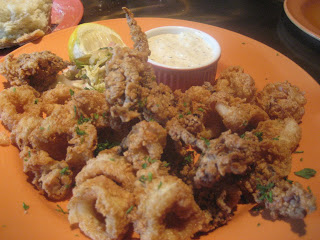 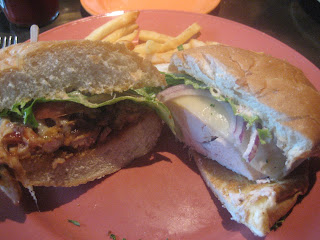 That night after the rehearsal dinner was a big party night. We went to several bars and stayed up much too late. I had quite a hangover the next day. Luckily, my friends introduced me to what they claimed was the best hangover food of all time: the spring rolls at the Portland Saturday Market. And they were right. I had two of them - dripping with oil and dunked in a spicy vinegar sauce - and I felt like a new man. By the time of the wedding I was in good shape. 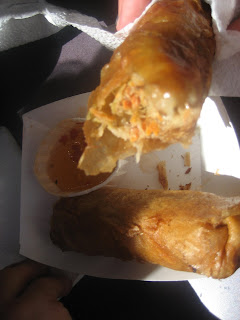